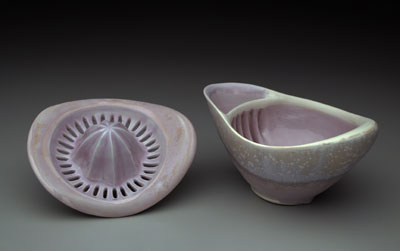 The design of food preparation tools involves more than ergonomics. The pieces we create shape our full physical and metaphysical interaction with the world, and are embedded within a larger cultural system of values.

My vision for our future with food involves people working with whole foods in a direct way to craft their own nourishment, so I’ve been developing a line of kitchen tools with that goal. These include mortars and pestles, sieves, spooning utensils, graters, and juicers.

In designing a juicer form, you’ve got a few decisions to consider. The first is the specific purpose of the juicer—will it juice small citrus (lemons and limes) or larger citrus (oranges and grapefruits)? With the juicer and bowl form described here, the juicer form, which is the site of reaming action, hangs over a receiving bowl that’s also a pouring form. The three purposes—reaming, catching, and offering—must be integrated into an overall form that’s stable during the juicing but not too heavy during the pouring.

Another consideration involves the straining of the pulp and/or seeds from the juice. You’ll have to decide how much pulp you want in your juice, and design a straining mechanism that catches the seeds but allows the desired amount of pulp through. A final consideration might also be how the form could serve to store leftover juice, if you decide that’s important. Start your process with a strong idea for how to answer these design issues, then sketch profile and cut-away views of the form, inside and out. For the purposes here, when I refer to the bowl I am talking about the lower receiving bowl; when I refer to the juicer I am talking about the hanging reamer section. 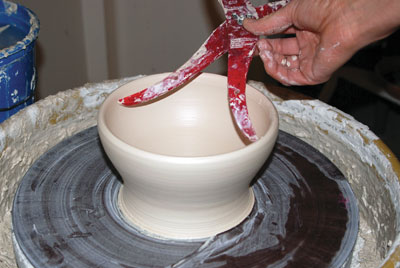 First, in the wet forming phase, throw a bowl and measure the inside rim (figure 1). The juicer hangs inside this rim, so the inside diameter is the important measurement. 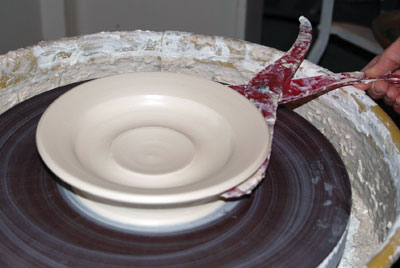 Next, throw the juicer. It’s shaped like a shallow bowl or low plate (figure 2), depending on how you would like it to curve over or into the bowl. When throwing the juicer, remember that the outer edge of the juicer rim will be trimmed down to an oval shape to match the hand-built handle added to the bowl, so be sure to be generous with the amount of clay you leave for the overhang. Be sure to leave enough width between the rim and center of the juicer for the fingers and orange to rotate around the reaming area.

As you’ll see below, I have a separate mold that I use to make the reamer, which I make later. I estimate the diameter of the juicer based on this mold. 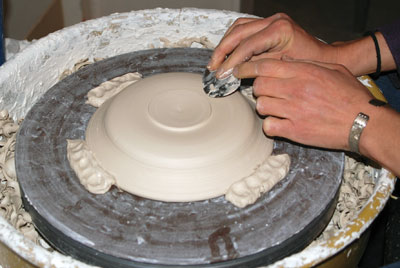 When the parts are set up just enough (soft leather hard), you can trim the juicer on the wheel (figure 3). You’ll trim and shape the bowl using a rasp later, so that you can create an oval foot. 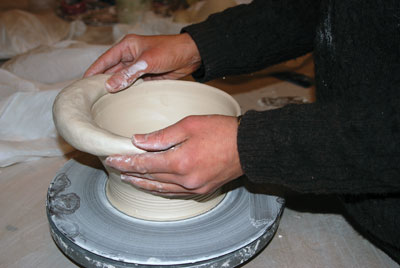 Since the juicer is designed to fit inside of the round rim of the bowl, the bottom can be trimmed on the wheel so that it registers properly when placed on the bowl. The juicer rim will be reshaped later to fit the curve of the bowl’s rim, so after trimming, moisten the edge and wrap it in a strip of plastic several times. 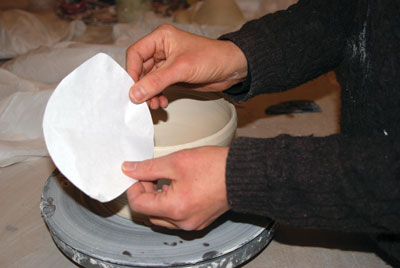 I prefer the solid form technique, because it allows the handle to be shaped into a unified form with the bowl once finished (figure 4). Pinch the handle into a rough shape, then let it stiffen  to a soft cheese consistency before hollowing it out.

While the handle dries, work on the spout. Use a quick paper pattern to estimate the shape of the slab needed to attach to the front of the bowl (figure 5). 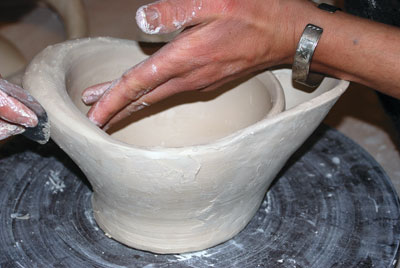 Reshape the slab slightly to give it a more generous pouring throat, then attach it to the front of the bowl, working the joint together with metal ribs so that the spout and bowl form flow together. You might want to add a coil on the inside of the spout to round the edge and guard against cracking.

When the bowl handle has stiffened, hollow it out from the inside so the walls are an even thickness, then attach it to the bowl using a basic slip and score method and pressure from a metal rib (figure 6). Shape the rib to achieve an upward movement that continues the curve of the bowl. 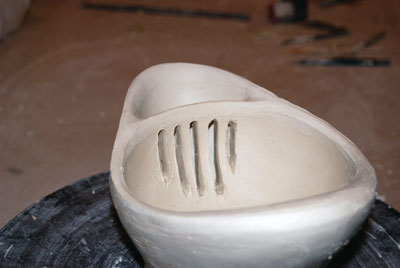 Be sure to create a hole in an inconspicuous place on the handle so that air can escape as it expands during the firing, otherwise the piece may explode. At this point, cut or drill perforations in the wall of the bowl leading to the spout, or cut this part of the wall out completely (figure 7). Even if you decide not to have a perforated wall in this part of the bowl, it’s good to leave the upper rim whole, since the juicer will hang there and could use the support. Allow the bowl to set up slowly while you work on the juicer. 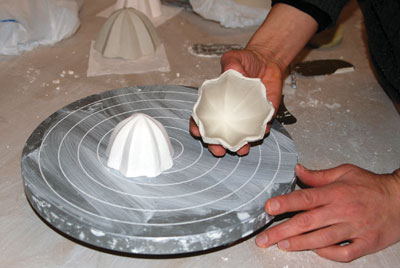 Now mold the reamer cone using a plaster or bisqued slump or hump mold. The reamer mold can be made from a commercial juicer or your own design. Drape a slab into or over the mold, using a sponge to work it into the crevices and over the protrusions. After sponging the form, I sharpen the edges with a rubber rib. The slab dries quickly and can be separated from the mold within a few minutes (figure 8).

Before joining the reamer cone to the juicer, reshape the juicer to fit to the rim of the bowl. If you need to wrap the reamer until the juicer is ready, do so. The two parts should be of similar dryness when joined.

Place the juicer on the bowl, working it gradually onto the bowl’s curved rim with a sponge. The spout and the handle additions have created a flowing curve for the juicer to follow. Work the edges of the juicer so that they hang over the rim of the bowl, this will keep the juicer from sliding around too much during use. After sponging the rim to get the contour, use a metal or rubber rib on that area to compress, form, or shape the clay.

Attach the reamer to the juicer, adding a small coil of clay around the base to guard against cracking. Remove the part of the juicer bottom underneath the reamer to expose the interior. Make sure the juicer is not bending as you work. Also, don’t worry too much now about clarifying the lines under there—it’s better to wait until the juicer has set up to a harder cheese consistency to clean it up. If you’d rather leave the bottom of the juicer intact, that’s fine, but remember to poke a small air hole in the bottom like the one made in the handle. 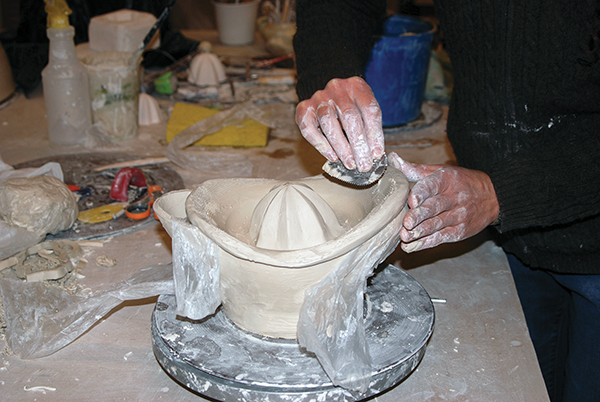 Place the juicer on the rim of the bowl after wrapping the bowl rim in plastic to keep the two separate. Attach clay on the handle end of the juicer so that it matches the bowl’s handle and provides the person juicing with a good grip on both of them (figure 9).

This is a good time to wrap any part that seems to be drying too fast (like the rim of the bowl) with plastic, then wrap the entire pot in plastic and let it sit, at least overnight. Such periods of rest within an airtight environment allow for even moisture redistribution within the piece. 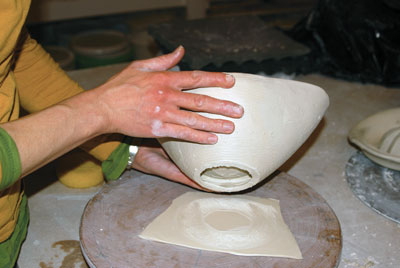 For the next phase, which involves trimming the bowl and perforating the juicer, the piece should be leather hard. To trim the foot on the bowl, use a rasp to remove clay, creating an oval form for the foot of the bowl that responds to the oval form created by the spout and handle. After rasping away the clay on the outside of the foot, remove the clay from the interior of the foot using a small loop tool. This can be left as an open foot ring, but I like to cover the foot ring with a slab of clay, creating another hollow area on the bowl (figure 10). This requires an air hole on the bottom of the pot like the one made in the handle. 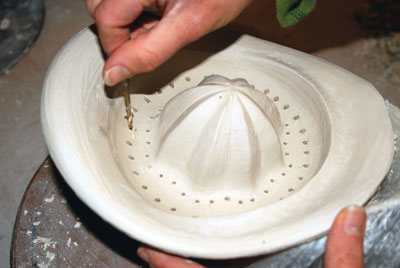 Reassemble the juicer and bowl, and use the rasp to remove excess clay on the juicer rim. Sharpen and clean up the edge on the underside of the juicer around the inverted reamer. Next, carve out perforations that will allow juice and pulp to fall into the bowl, while catching seeds. Drill small holes encircling the base of the reamer, following its contour and slightly larger holes toward the rim of the juicer (figure 11). Use a utility knife to join the holes, cutting slots that encircle the reamer (figure 12). Again, at this stage, wrap the pot and allow it to rest. 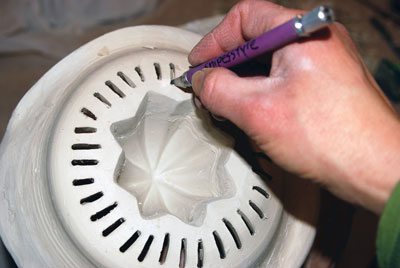 The next phase is one of refinement and reduction. When the pot is almost bone dry, gently scrape away unwanted marks and excess clay using metal ribs and loop tools. The purpose of this almost-dry trimming might be to lighten the bowl, to remove unwanted rasp marks, to cut a sharper foot ring, to clarify a curve, or to soften an edge. Sharp curved tools or small loop tools are handy for trimming the edges of the perforations in the spout wall (figure 13). I like those edges to be soft to correspond to the manner of the other edges in the piece. The holes in the juicer can be refined using a pin tool. 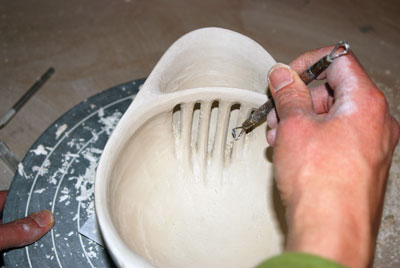 Now the forms can be air-dried, with perhaps a light covering of plastic if your room isn’t very humid.

Finally, when the pot is bone dry, use a sponge to erode away any unwanted marks or slight inconsistencies. A cosmetic sponge or a paintbrush works well to soften the edges of the perforated slots. Sponging a bone dry form is also nice because it reduces the amount of sanding that needs to be done before or after bisque firing. 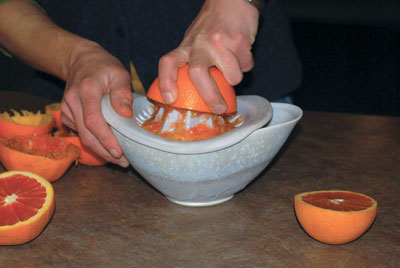 When glazing this form, remember that these two forms need to be fired together to ensure a proper fit after the firing. This means that the entire top surface of the bowl’s rim will be unglazed, as will the underside of the juicer rim. You can use a coil of wadding to separate the parts during the firing if you’re worried about them fusing together at all. I use a liner glaze inside the bowl and inside the juicer, and matt microcrystalline glazes on the exterior of the bowl and on the rim of the juicer. Once the pot is fired, I use wet silicon carbide sandpaper to polish any areas of raw porcelain. This leaves all areas of the pot feeling very soft to the touch.