How to Make a Casserole Dish by Combining Slabs and Extrusions Combining Extrusions and Slabs! Daryl E. Baird 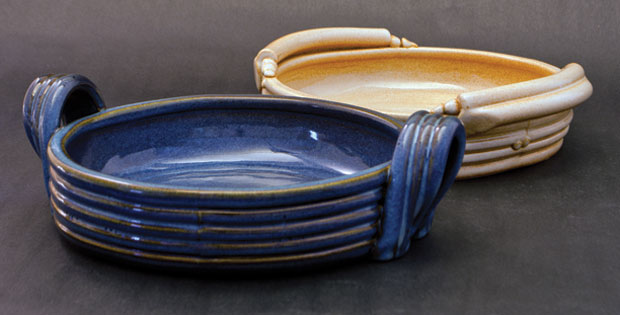 Daryl Baird's Extruder Book has just been revised and re-released, this time with 19 great how-to projects from beginning to end (including beautiful color photographs of the process and the finished pieces!). In today's post, I thought I would share one of those projects: a casserole dish that combines slabs and extrusions. - Jennifer Poellot Harnetty, editor

You can make a beautiful casserole dish from a circular slab of clay with a long extrusion wrapped around it. Use the same technique on a smaller scale to create dishes, trays and bowls. Note: Before you extrude anything, determine how long the extrusion has to be so that it will make it around the slab in one piece and that the extruder’s barrel has the capacity for the amount of clay needed.

1. Prepare a slab just under ½-in. thick. Transfer it to a piece of heavy construction paper. Using a pottery wheel bat as a template, cut a 10-in. circle. This becomes the base of the casserole dish.

2. Create a die with a ribbed design for this project.

3. Given the size of the die and the known capacity of the extruder barrel, it was determined by trial that a single extrusion 36 inches long was needed—enough to wrap around the slab with an allowance for the extrusion ends to overlap before being joined.

4. Before making the extrusion, place a board long enough to accommodate it on the worktable. Make the extrusion then carry it to the table and lay it on the board.

5. Liberally coat the outer edge of the slab and a margin about ½ inch from its edge with slip. Then brush the notch in the extrusion from end to end with slip.

6. Cut one end of the extrusion off squarely then pick up the entire extrusion (with the help of an assistant if necessary). Lay the cut end on the slab so the notch in the bottom of the extrusion meets the lip of the slab. The extrusion should just rest on the edge of the slab at this point (it will be secured later). Continue placing the extrusion until it wraps completely. There should be several inches of overlap.

7. To fully seat the extrusion on the slab, return to the start point and push the extrusion inward toward the edge of the slab using the palm of your hand. The extrusion is slightly lifted ahead of that allowed to move as the gap between the extrusion and the slab is closed all the way around the edge.

8. With the extrusion fully seated, trim the excess by holding the overlapped ends together and slice through them from top to bottom using a knife or long rib. Be careful not to slice into the slab.

9. Coat the two ends of the extrusion with slip then join them by working them back and forth until a good meld is achieved. Smooth this outside of the join with a sponge. The grooves will be cleaned up later.

10. The die was designed so that a bead of clay would be inside the bowl where the extrusion rests on top of the slab. Use your thumb and a rubber rib to smooth out the seam and direct clay toward the center. If the casserole is slightly out of round, use light strokes on the inside edge to work it back into round.

11. Invert the casserole and apply light pressure with the palm of your hand to close the gaps between the extrusion and the slab. Use a rib to completely smooth the seam. 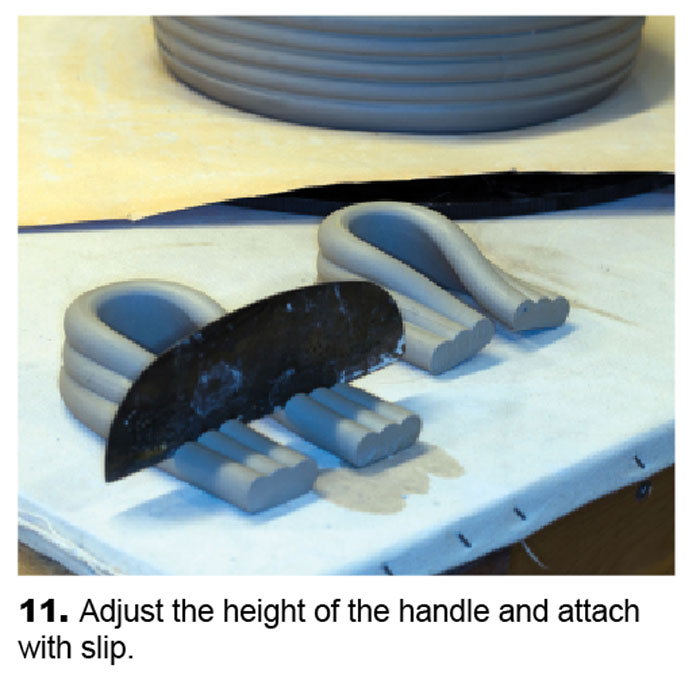