Going Industrial: One Potter Shares his Experience with the Mass Production of his Pottery A Foray into Mass Ceramic Production David Pier 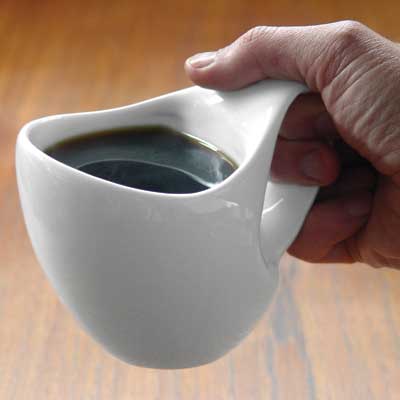 Why would someone who has spent most of his adult life pursuing excellence in handmade pottery enthusiastically pursue mass ceramic production? That's the question potter/ceramics consultant/inventor/entrepreneur David Pier asked himself when he faced the conflict of wanting to meet high levels of craftsmanship and design, but still keep the pricing on his pots affordable.

So, he explored the option of mass ceramic production for his work. What he learned from this experience might surprise you (and, if I know my readers, it will definitely spark some debate). In today's post, David tells us all about his forays into mass ceramic production. - Jennifer Poellot Harnetty, editor.

My career in ceramics started in one of the standard ways, falling in love with ceramics after taking a college course to satisfy a general education requirement. I added an art major to my chemistry major and later earned an MFA, with the intent of being a studio potter and a ceramics professor. I taught at the college level for ten years, loved doing that, and I hope to do it again someday. I have also maintained a studio to this day, for a total of about 20 years.

From early on, however, I felt a conflict between my desire to perfect my designs and my desire to price pots low enough that the price would not negate their functionality. I never bought into the dogma of the humble potter, but I also wasn't happy making only pedestal pieces for collectors. While there are obvious shortcomings in the quality and design of most mass-produced items, I never disapproved of the concept of mass ceramic production. In fact, as my work developed over the years, I started to wish I could have my items mass produced! While I understand the many positive attributes of the unique or limited-production handmade pots, I also value the benefits of mass production. There are many thoughtful people with good taste who also have small incomes. Although their discretionary funds are limited, these people still wish to create a well-considered and beautiful environment for themselves. Just as limited edition hand-bound art books have their place alongside the modern mass printed book and e-book, handmade and mass produced ceramics don't necessarily conflict with each other. There is a need for something between the $50 handmade pot and the 50¢ Wal-Mart pot.

At the National Council on Education for the Ceramic Art conference in 2006, Ian Anderson mentioned to me that he had spoken with Ed Weiner at Maryland China about the possibility of self-financed mass ceramic production. I had always imagined selling or leasing my designs to someone else, but I quickly came around to the idea of paying for the venture myself. I spoke with Ed and, before long, I had paid $500 to have a prototype of my coffee cup produced. I had a lot of confidence in my design, since hundreds of people had paid $75 retail for one without a saucer. Although the mass-produced cups wouldn't have the brightly colored glazes of my originals, I figured thousands of people might pay $20 for one with a saucer that doubled as a lid. I felt that the commission that Maryland China would charge was well worth the security of dealing with a long-standing family business in the United States, as opposed to sending my money overseas without much recourse. If I had felt qualified to deal with Chinese factories, I would have done it earlier on my own. Maryland China also has relationships with factories that use a wide range of materials and processes, so they can choose the right factory for the job. They have extensive experience with importation and get volume discounts on freight rates from the port.

The Ceramic Production Process (as I imagined it)

Pay the development fee and send one of the cups I had cast myself.

Like most of the big projects I've taken on, being overly optimistic was necessary to get me started.

The Ceramic Production Process (as it was in reality)

The first thing that went wrong with the plan was that the factory wasn't able to make the accurate scaled-up replica necessary to accommodate the porcelain shrinkage. The model maker "fixed" my design by making the body round, among other changes, when, in fact, the oval shape is an important visual and functional feature of my design. So, I had to spend 30-40 hours to make the master model myself. The next prototype followed my design much better, but the wavy rim had been cut without an understanding of the design. If even the model maker couldn't execute this element correctly, I could see that my old studio method of doing it by eye wouldn't work in the factory.

The line of the lip needed to be dictated by the casting process, so I quickly came up with the idea of adding an additional top mold piece that, when removed first, would provide a guide for accurate rim cutting. The third prototype finally met all of my requirements. On the positive side, except for some shipping costs, all three prototypes were covered in the development fee. Without my previous experience with mold-making and casting, the development process for my unusual design would have been just about impossible. 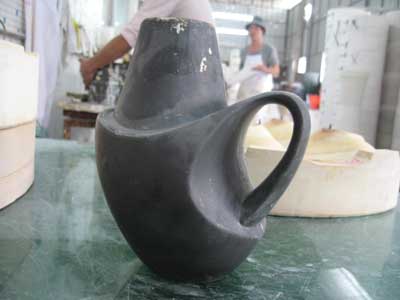 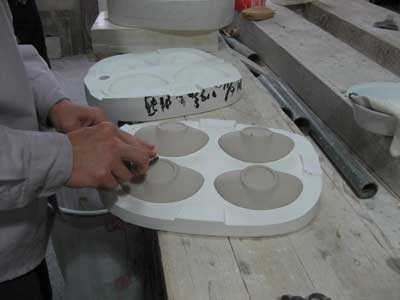 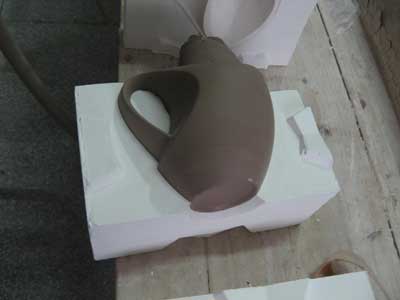 I was impressed by the whiteness and translucency of the porcelain. I requested bisque samples and found that all of my glazes worked great without modification. The Chinese porcelain was better than any material I could get for use in my own studio.

There were some small compromises to the form that mass ceramic production dictated. The transition from the handle to the body at the top is seamless in my studio cups, whereas the factory cups have a visible line. Inside the cup, where the bottom of the handle joins the body, there is a small pocket. It is easy to clean, but it is disconcerting to some that the surface can't all be seen. We ended up casting the cups a little thicker than the factory usually does, in part to reduce the size of that pocket. The thicker cast actually makes the cups more functional in most respects, such as heat retention and strength, so it is only the remaining pocket that is a compromise.

When I learned of the quantity discount on a larger order, I increased my order to 4600 pieces, including 1000 unglazed. About four months later, the shipment arrived (to my billing address, rather than to the storage space as I had desired). When I opened the first box, I was very pleased. The result was better than I had originally imagined. Later, upon examination of more of the cups, I found that quality control was not what I would have hoped, and there were many pieces that could not be sold at full price. Many also required a little foot polishing to make them table-safe. I later negotiated a credit for some of the most defective pieces, and the quality control in later orders improved dramatically. I learned that the contract needs to be explicit about acceptable defect rates.

I realize now that factories will never come close to 100% perfection at an affordable cost. This revealed the biggest flaw in my original idea of how the whole venture would work. The flaws meant that a third party fulfillment agent, without expertise in ceramics, was impractical. The economics of the resale still worked out well, but I would have to do more of the work myself.

In the end, Lux-Delux Design became a one-man show. I designed the logo, photographed the cups, built the website to sell them, I warehouse the cups in my house, and I do most of the packing and shipping myself. At the beginning, there was a lot to figure out. Quality grading, pricing, web design, web placement, packing and shipping methods, freight shipping for larger orders, customs and duties for international customers, inventory systems, taxes, decals, return policies, and many other details.

After two years of selling them online, I now have the process refined to where it takes me an average of just over one hour a day to deal with all of the coffee cup business. I occasionally hire a neighbor for a little help, and sometimes it takes up an entire day or two. I've found it lucrative enough that I ordered more of the 12 oz. cups from the factory, as well as adding a smaller 8 oz. cup.

My coffee cup website is a critical part of my mass-production success. I have always been comfortable working with computers and have enjoyed building up my photography and writing skills over my years as a potter. Selling on the Internet is not the only way to approach a mass-production project, but it is an approach that has allowed me to make use of my creativity and several skills that I enjoy.

It is important to be realistic about what you can and cannot do yourself, and to take into account the costs of hiring others to do the things you cannot. Someone else might find success by directly approaching museum shops and other resellers, perhaps using the prototype to line up orders before investing too much money.

I've found that I enjoy interacting with my customers by email, and I am more comfortable being in control of the image projected over the Internet. I am pleased knowing that thousands of people now get to enjoy my design, and the cups are a pretty good approximation of what I would have made with my own hands. I didn't have to cast thousands myself, freeing up time for my studio and other projects.

The cups have received exposure on consumer product and design blogs, which my studio pottery never would have received. That exposure has elicited interest for my design-for-fee services, so my self-financed mass ceramic production has been an unusual entry into the design world, allowing me to spend more time doing what I've always enjoyed the most. Perhaps the most practical result of this project is that my income is more stable than it would be if I were only selling my higher priced studio work.

For further information on the Ultimate Coffee Cup, see www.davidpier.com.

David Pier is a ceramics consultant and potter living in Chapel Hill, North Carolina. Because of this project, he has been able to pursue his new invention, the HoundRound dog exercise wheel (www.houndround.com).