Texture in clay can be addictive. Who doesn't love pressing objects into a piece of soft clay? And why stop at the handles?

As Annie Chrietzberg demonstrates in today's post, textured slab handles are a great way to carry texture throughout a piece—plus they are less messy than pulled handles and can provide instant gratification. Have a look! - Jennifer Poellot Harnetty, editor

There’s a viable alternative to the drudgery and messiness of pulling handles—making them from slabs. I think slab handles are especially pleasing when impressed with a texture because it adds an extra visual—as well as tactile—zing. Furthermore, there’s no waiting for slab handles to set up since they can be made and attached right after a cup is trimmed. I slip, score, then slip, and score through the slip again, to create an interface where the handle joins the cup. Then I set the finished cup in a plastic box overnight. 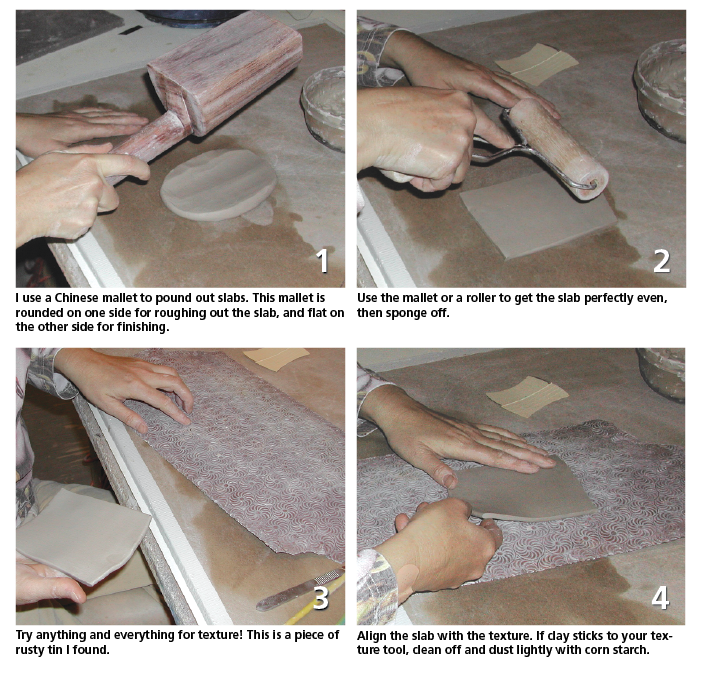 I first experimented with slab handles while an undergraduate, encouraged to try as many different ways to make handles by my professor, John Brough Miller. Back in ’97, when I saw Lana Wilson make handles from a thin slab that she then folded over, they really began to make sense. The extra volume created within the slab when folded creates the perfect weight in regards to the thickness of the handle in relationship to the overall balance of the cup.
I’ve never had a problem with air being trapped within the handle, in part because the seam created by the fold is an informal one. There’s no need to slip and score that seam, just let one side rest atop the other. The seam can be put on the inside of the handle, or used as part of the design on the outside. A vent hole can be added—just put it in an inconspicuous place—and knock off any sharpness created before firing!

I make cups in “litters” of a dozen or so. When I change the form of a cup, I’ll change the shape of the handle, and also the texture. Every texture bends a different way. Just roll out a slab, then cut it into even strips, impress with different textures, and you’ll see what I mean. 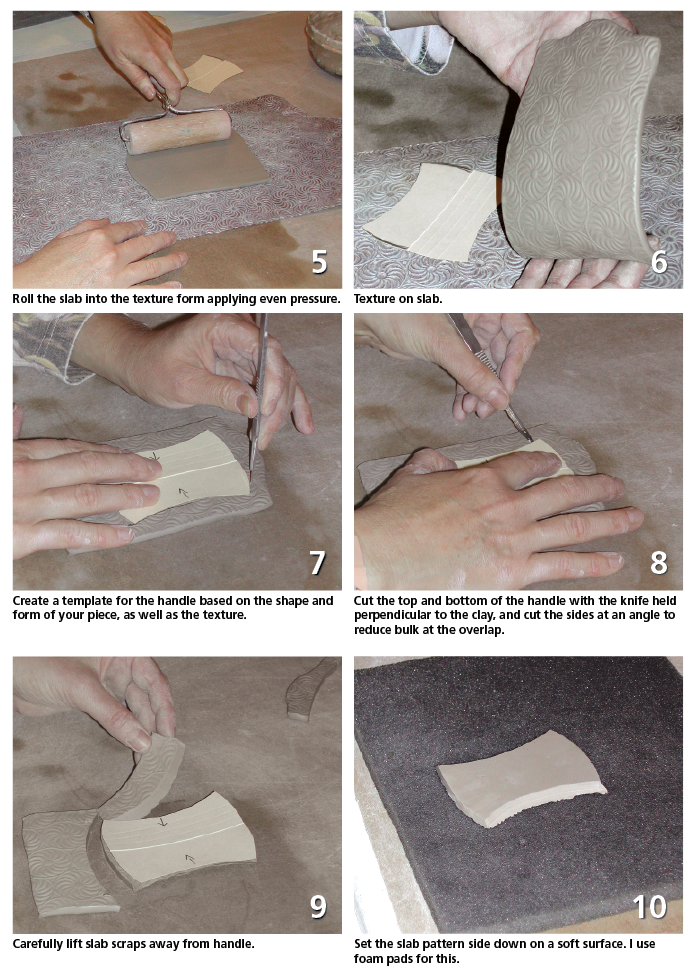 I have many different texture tools. The fan or flower texture is a piece of rusted tin I found back in the early ’90s on an abandoned farm. I also, like other textural potters, use retired batik blocks—my favorite blocks were found at a street market in London. These blocks can surprise you, as the negative space often takes on volume and dominates the texture. I also cut apart corrugated craft paper and tape it back together to make corrugations that meet in dynamic angles.

Start with a small piece of clay and make a thin, strong slab (I use a Chinese clay mallet to pound out the slab). Create a template that works with the texture you’re going to use as well as the size of the cups you’ve thrown. Align the template to the pattern in the texture and cut the sides with the tip of the knife pointing it in to reduce the amount of clay where it overlaps once you roll in the sides of the handle. Make sure you keep both the area you’re working on and your hands free of “crumbs,” otherwise they’ll embed themselves in, and disrupt your texture. Crumbs tend to become even more visible when you start to shape your handle. 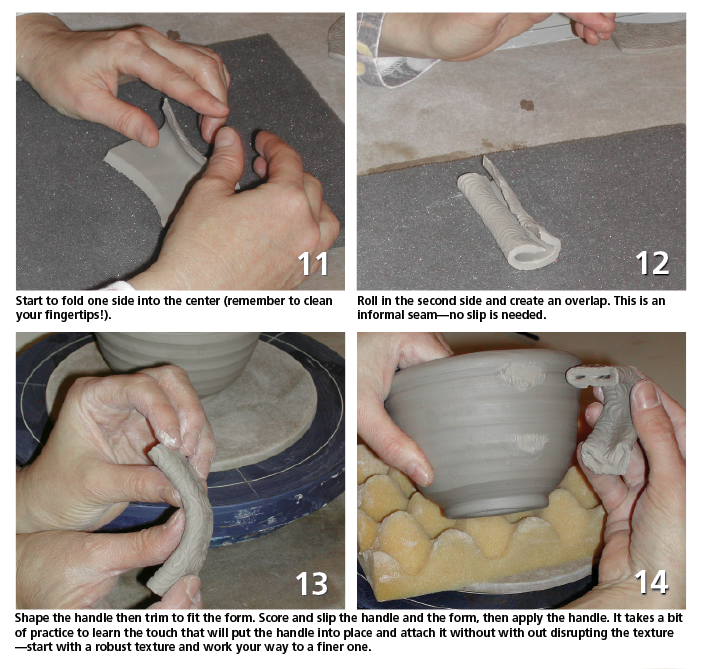 To learn more about Annie Chrietzberg or see more images of her work, please visit http://earthtoannie.com/.