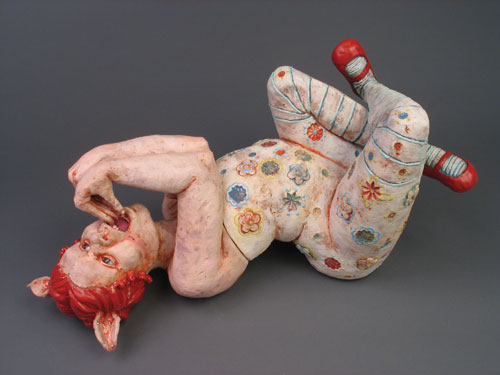 I primarily make functional work, so it is always interesting to me to see how ceramic sculptors go about making their work. Maquettes have long been used by artists as a way of planning out a sculpture. They are basically three-dimensional sketches in miniature of the eventual larger-scale work. Magda Gluszek uses them for her expressive figurative work. She says this step is essential to her process because it allows her to get the pose and proportions just right before starting on the actual sculpture.

In today's post, an excerpt from the January/February 2011 issue of Pottery Making Illustrated, Magda walks us through her ceramic sculpture process from maquette to form. - Jennifer Poellot Harnetty, editor

My clay sculptures investigate ideas about consumption, self-presentation, and societal behaviors versus animalistic impulses. Using the building-solid-and-hollowing-out technique allows flexibility in planning dramatic, performative poses while a combination of ceramic and mixed media surfaces give me a variety of options for referencing confectionary textures and colors. I’m constantly absorbing information about multimedia processes from hardware stores, craft books, and other artists that add depth and variety to my figures. 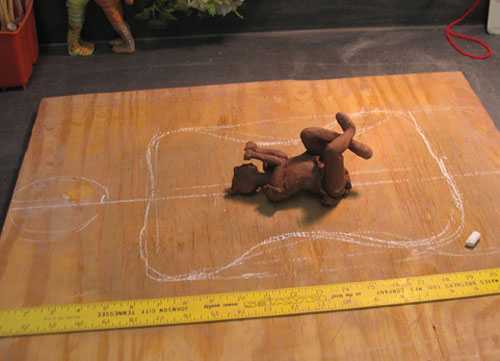 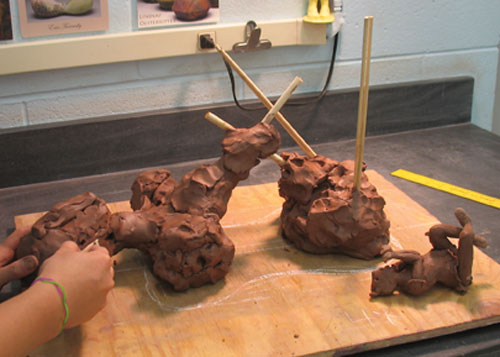 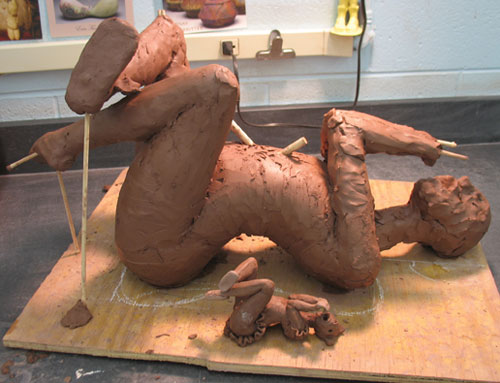 Building solid forms in clay is a technique often looked at as a means to an end and not an end in and of itself. It’s traditionally used by artists who take a mold from their sculptures and cast them in another material such as bronze or iron. I strive for a gestural style in my sculptures, leaving my tool marks as evidence of how I work, a style influenced by artists such as Auguste Rodin, as well as my studies of terra-cotta maquettes from the 1700s and 1800s for larger works in clay, marble or bronze.

I begin by sketching and then building a small maquette to work out the positioning of a figure and details of the pose. The small models have a life to them that’s very different from the polished quality of the finished works. It’s important to capture that fresh feeling and liveliness in my figures. Translating the sketches to a three-dimensional model is essential to the building process because it helps me to adjust the pose and proportions of the figure, as well as plan the final scale of the piece. Measuring the maquette and marking out the workspace gives me an idea of the sculpture’s final dimensions, in this case four times greater than the maquette (figure 1). This also allows me to check myself throughout the building process by measuring various parts of the body and comparing them to the model. 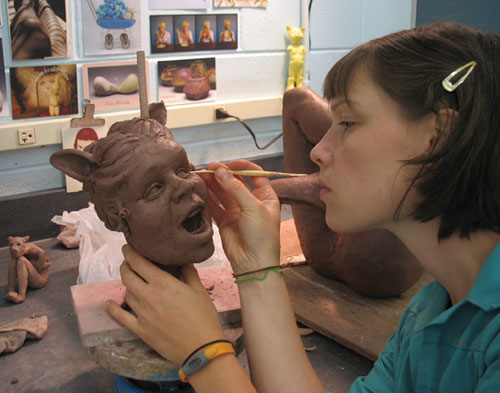 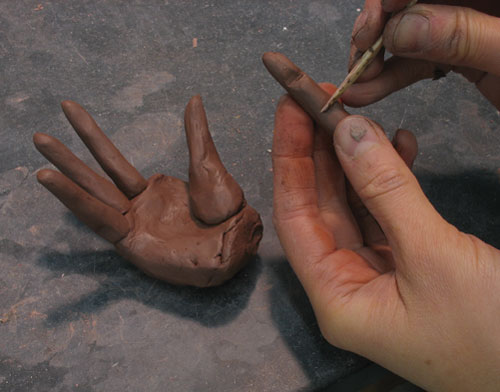 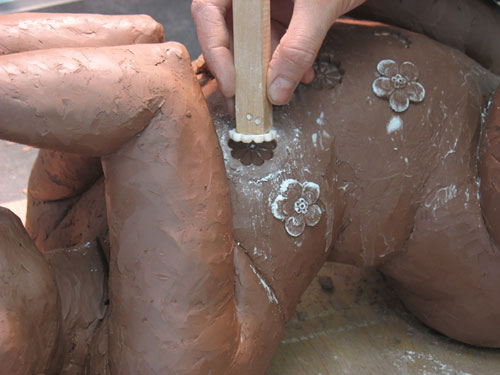 The mass of the sculpture is built up with solid clay. Wooden dowels are added wherever support is needed and clay is squeezed around them to hold them in place and extend the form (figure 2). These linear extensions are also planted to determine the direction and angle of limbs. The maquette is referenced constantly throughout this process. Wherever possible, dowels protrude beyond the form for easy removal. As limbs begin to extend further from the figure, external dowels are added for extra support. Because the clay dries and shrinks around the internal supports, the strength of each limb is constantly monitored and I remove the dowels as soon as the limb can support itself or be supported externally.

Initially, clay is added and manipulated by hand, but as the form progresses I use a plastic putty knife to direct the material, imply the underlying bone and muscular structure and create gestural marks. Building solid allows me to work the form as a whole and gives me the flexibility to fluidly correct proportions and change direction of limbs (figure 3). 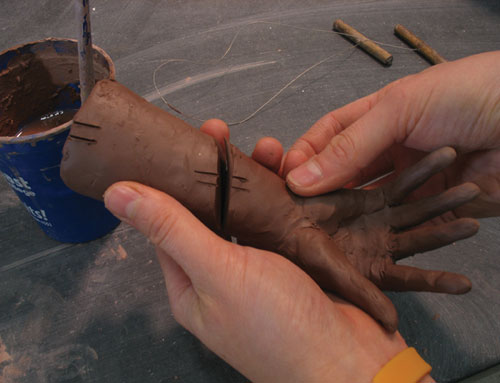 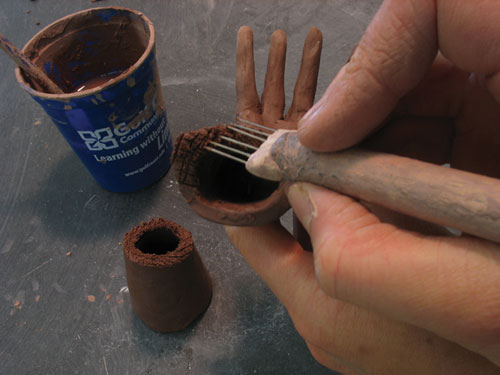 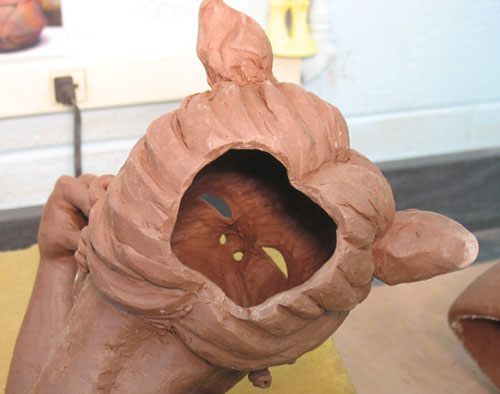 Detailing the sculpture begins once the whole body is roughed out. As the form gains definition, I switch to smaller wooden and plastic knives to make more specific markings and delineate skin folds. Detailed areas of the figure, such as the head and hands, are removed from the body and modeled separately (figures 4 and 5). When completed, they are reattached to the form. Thin and exposed limbs are covered to prevent them from drying too quickly.

Cornstarch is used as a release agent in the mold and dusted on the figure, preventing the plastic stamps from sticking and allowing them to make clear impressions. The cornstarch leaves no trace when fired. 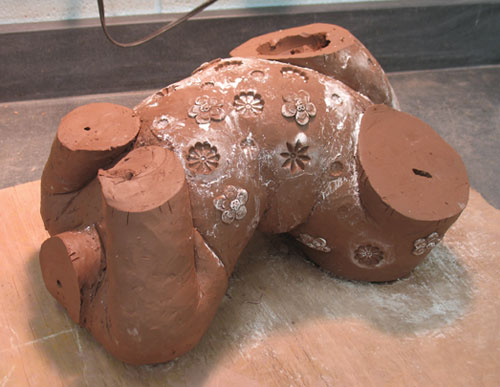 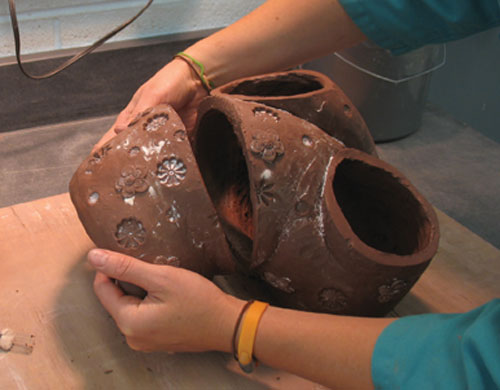 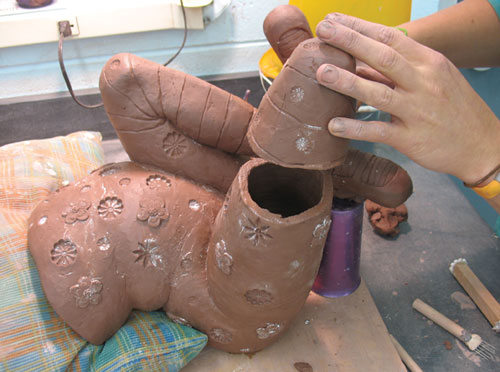 After the figure is completely modeled, I allow it to dry to a stage that is slightly soft-leather hard. Extending limbs are wrapped loosely with plastic because they dry quickly. When these appendages reach the right stage, I assess where to make the first cut to begin hollowing, usually starting with a hand or a foot, providing it does not compromise the balance of the figure. I cut with a wire tool, aiming for a spot with minimal detail to repair upon reattachment. Notches are made around the cut so that the pieces can later be matched up to their exact position (figure 7). Various sizes of loop tools are used to dig out the interior clay until the walls reach a consistent thickness of about ¼ inch. A wooden knife is used to compress the inside walls for added strength.

Each time a section is hollowed, it is wrapped in plastic and placed on a piece of foam to prevent distortion. When two sections are hollowed I score the edges with a homemade tool composed of several sewing needles epoxied to the end of a wooden dowel (figure 8). Slip is applied and the forms are rejoined. Fresh clay is worked into both interior and exterior seams. I try to recreate the markings of the initial building process while disguising the connection.

The arms, legs, and head are removed and re-built piece by piece in this manner. They are then wrapped and laid aside on foam. When hollowing the head, I remove the eyeballs, leaving empty sockets. A section is cut away from the back of the head (figure 9), allowing access to install porcelain eyeballs, post-firing.

Next, hollow out the solid torso (figure 10) and reassemble it in the same manner as the head, hands, and legs (figure 11). Begin by attaching the limbs first (figure 12). Appendages that require specific positioning, like the hands, are added last (figure 13). The attachments are often fragile and limbs are propped with various supports and clay. Cover the entire piece with plastic for several days, unwrapping it a little each day and allowing it to dry evenly.

For more information on building figurative work and using mixed media please see the following sources: The Nude Figure: A Visual Reference for the Artist, by Mark Edward Smith; Human Anatomy for Artists, by Elliot Goldfinger; The Art of Resin Jewelry: Layering, Casting, and Mixed Media Techniques for Creating Vintage to Contemporary Designs, by Sherri Haab.