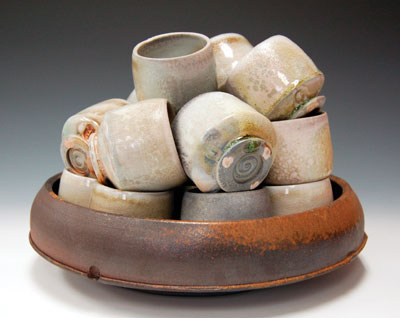 I was really excited this particular piece was accepted, because not only does it have a clear functional purpose, but it also suggests how cups can be displayed and leans toward an idea of community. The piling or stacking of work, to me, has a great fit. It is able to juxtapose the idea of precious art object with everyday drinking vessel. A bowl full of cups is inviting, disarming, it's simple—it's a big stack of pottery! I think that is pretty cool. Sometimes we don't need to cover it up with too much meaning.

The formal aspects relevant to the work are seen in a move toward honesty and simplicity. Honesty is an acceptance of what it means to make pottery—understanding that it is a practice. The form and surface of a piece of pottery simply need to point to the fact that it is pottery. A simple approach can be particularly successful in a culture oversaturated with complex imagery. My approach to form leans toward stark and stoic, highlighting the process of throwing and firing.

I value the time it takes to throw each cup and the variation found in each cup. The work hints more at a practice than a final object. Beyond that, the cups need to hold liquid of some sort—preferably whiskey.

Function is obviously the key component here. However, it is dizzying to see all the new forms and surfaces people are coming up with today. I think this has a lot to do with the quality of ceramic education in art departments and continued in residency programs. This makes for good functional work and increases formal vocabulary. Personally, I return to simple forms, but I have been working with wood-fired reduction cooled surfaces to dress them up a bit.

I want to keep things simple. While perhaps counter intuitive, simple is the most difficult to pull off. I have a tendency to want to over think, over throw, over decorate a piece of pottery. Sometimes the most successful pieces are those brought back to the basics.

The owner of a piece can do whatever they feel is suitable. As a potter, you can help them get to where you think they should be by the design and execution of the work. In my eyes, this is a set of whiskey cups. Sure, it‚Äôs decorative. But I am not the one to say whether it should be used for whiskey, wine, or to present at a lemonade stand.

Now, in my house, this piece is for the express purpose of having a Montana flavored whiskey jam (even though I am currently a long term resident at Pottery Northwest in Seattle, Washington). The ceremony is very important‚Äîbut ceremony is a big word. I would prefer to use "Whiskey Jam." The principle is simple: the more, the merrier! (True for both people and whiskey.)

I am pretty sure my pottery has not reached the value where people are afraid to use it. I have pots in my house that are deemed "top shelf," and I try not to use them, but tableware is supposed to be used as such, and I try to push this idea with my own work.

I think people will always value hand-thrown pottery. It is a mark of craft and stability. A hand-thrown pot can contain nourishment as well as provide it. It sells itself. Utilitarian pottery reconciles the precious nature of art objects with the necessity to inject artful practice into all the things we make and consume. It establishes a balance between a unique and valuable item and an acceptance of a functional end. This specific piece came out of a pile of cups I saw at my friend Dean Adam‚Äôs house. I think this is how a potter would display cups. And during a whiskey jam its good to have an extra couple cups on hand.