Atmospheric firing is really exciting because you can continue to influence the surfaces of your pots all the way through the firing process. Plus there's always an element of surprise when the kiln is unloaded.

In today's post, an excerpt from Soda, Clay, and Fire, Gail Nichols gives pointers on how to get great effects on your soda fired pots by creative kiln loading. Some of these techniques could be helpful in wood and salt firing as well. - Jennifer Poellot Harnetty, editor 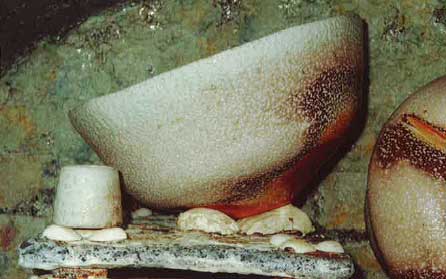 The firing schedule is not the only factor dictating the results of soda glazing. Firing is a very dynamic process, with interactions involving flame, clay and soda vapor. These interactions are partly determined by the way pots are placed in the kiln. Loading the kiln is one of the more creative stages of soda glazing.

Be prepared to spend time with the loading, considering the implications for the placement of each piece in the kiln. How does it sit in relation to the path of flame and soda vapor? Which side of a pot will receive the heaviest glaze? Is there another pot near it that will block the flame and vapor? If so, what is the shape and direction of the shadow? Can the vapor penetrate the pack to reach pots in the center of the chamber? Where are the wads arranged on each pot, and how will their marks relate to the form and the glazed surface. 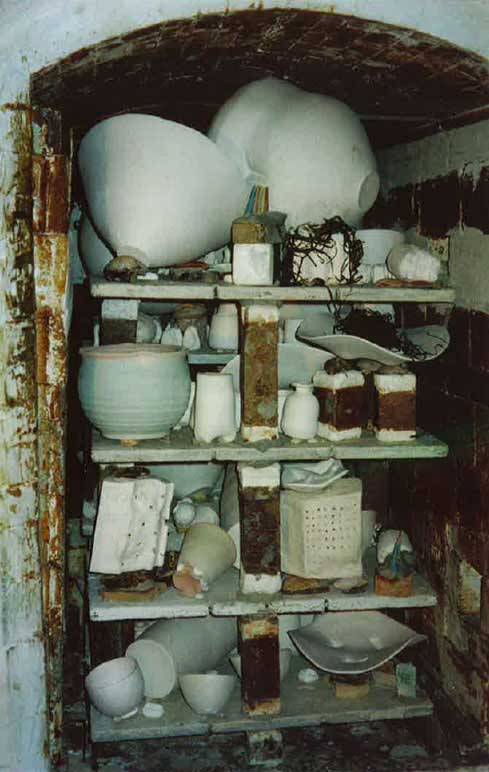 To learn about loading a kiln for directional atmospheric effects, it is worth consulting the wood-firing literature and wood firers themselves, but bear in mind that soda has its own characteristics. Experts in other firing styles may provide some clues, but they cannot be relied upon to solve problems with soda glazing, even in the case of a wood-fired soda kiln. It is important to read, listen and observe, then translate the findings into a soda glaze scenario.

As John Chalke has pointed out, soda is not the "bombast" that salt can be. It needs to be "coaxed"into the kiln pack. I have found the tumblestack arrangement  used in many wood kilns, in which pots are packed against and upon each other without the use of shelves and props, unsuitable for gas-fired soda, as the vapor fails to penetrate to the pots at the bottom and center of the stack. Some kiln shelves are essential to provide spacing between layers of pots, but too many layers of shelves will restrict the movement of flame and vapor. An effective pack will include minimal use of shelves, and an assortment of pot sizes on each shelf to allow vapor movement. Where shelves are placed next to each other, there should be a gap between them to encourage vapor movement through the middle of the kiln pack. Staggering shelves is a better option, as it avoids dividing the chamber into restrictive layers.
A good soda kiln pack will have the dynamic sense of a well-balanced sculpture, with positive and negative spaces planned to allow vapor movement over, into, under and around the pots. Lightly flashed areas will occur where one pot shadows another. Thicker glaze formation will occur on pots that protrude from the pack, particularly near the fireboxes. Planning the kiln pack begins with the design of the pots. Directional changes in the form of a piece are likely to create changes in color. Sharp indentations promote localized splashes, while generous curves favor more gradual color changes and glaze movement. Contrast between protected interior surfaces and exposed exterior surfaces can be exploited in both design of the work and the kiln pack. There should be a continuity of aesthetic vision through the entire process of making and firing.
Topics: Salt Firing and Soda Firing