The sgraffito technique is an effective way to make bold lines on clay. Sgraffito is a process in which a surface layer is incised to reveal a ground of contrasting color. Kathy King is a well known artist who uses this technique very effectively with black slip and a white clay body.

Sue Tirrell is another master of the sgraffito technique who adds lots of bright colors to the mix. In this post, an excerpt from the Ceramics Monthly archive, Andrew Buck explains her sgraffito process from initial sketching right on the piece to the final glaze firing. - Jennifer Poellot Harnetty, editor

P.S. Check out these sgraffito tips from the archives! 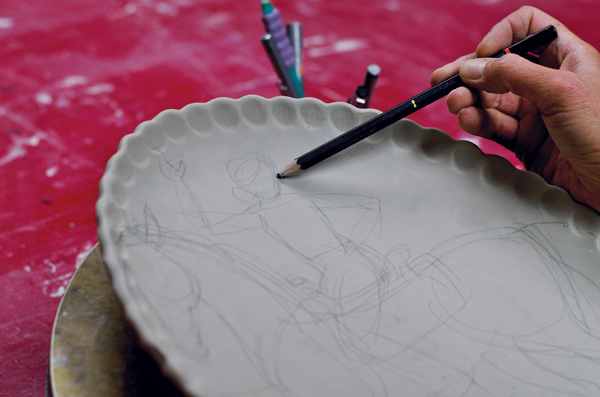 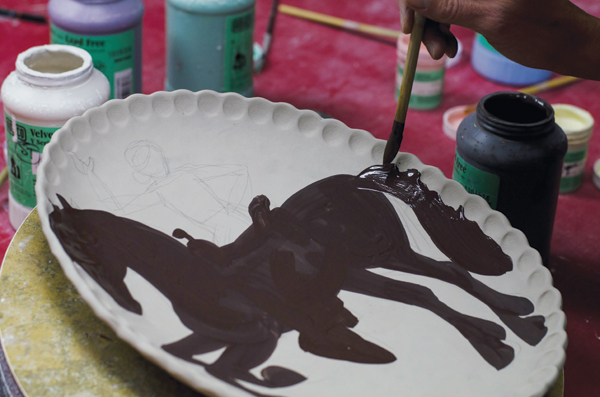 Before launching into a how-to session, it is helpful to keep in mind that creative work takes place in a cultural and personal context and history. For example, Tirrell inherited an interest in Rosemåling from her grandmother. Rosemåling is an 18th- and 19th-century Norwegian decorative folk art that involves hand painting wood and furniture with embellished designs and patterns. Old Norwegian coins and her grandmother’s drawings, which were passed down in the family, fueled Tirrell’s aesthetic sensibility. Tirrell was also heavily influenced by a high-school art teacher who encouraged her to draw all the time. Drawing became second nature to her as a teenager. This proved helpful when she studied later with Cameron Crawford, a contemporary ceramic artist whose portfolio includes a tract of visual narrative work. 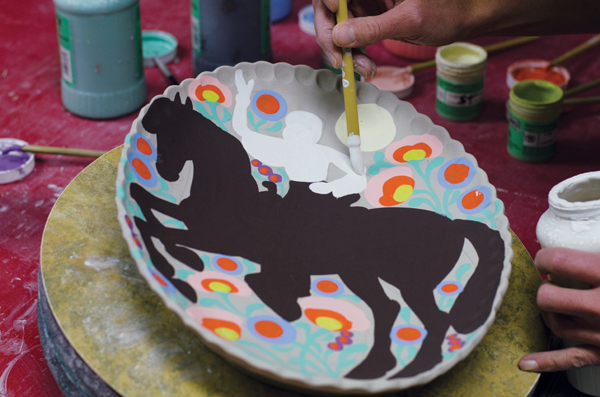 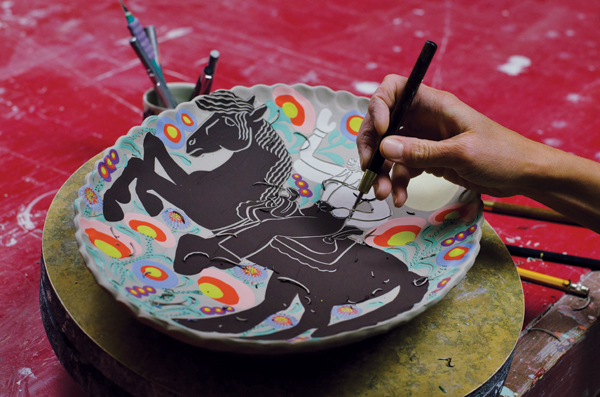 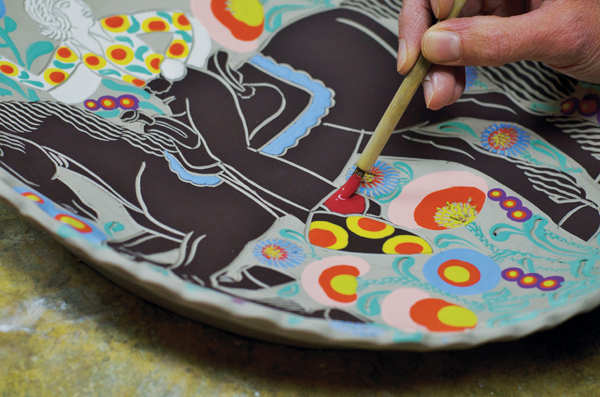 Tirrell has mastered a visual vocabulary for composition, so she seldom relies on preliminary drawings. She approaches a leather-hard platter or plate with an idea in mind and begins sketching directly onto the clay body. If she is dissatisfied with the details or elements of the drawing, she rubs it out and re-works the basic design, which blocks out the large areas of color. Her extensive experience with pre-formulated underglazes, designed for brush application, enables her to apply underglazes confidently with a fresh sense of immediacy. The secret to her success is to work patiently and steadfastly as she fills the clay canvas with color. The photo sequence simplifies her process but captures her overall process in developing an image on clay. In the photograph of the Trick-Roping Cowgirl platter (9), there is a subtle silver sheen on the hindquarters of the horse. That is not an error of photography. It is making reference to the healthy hair of well-fed, well-groomed horses which can glisten radiantly in the sun. 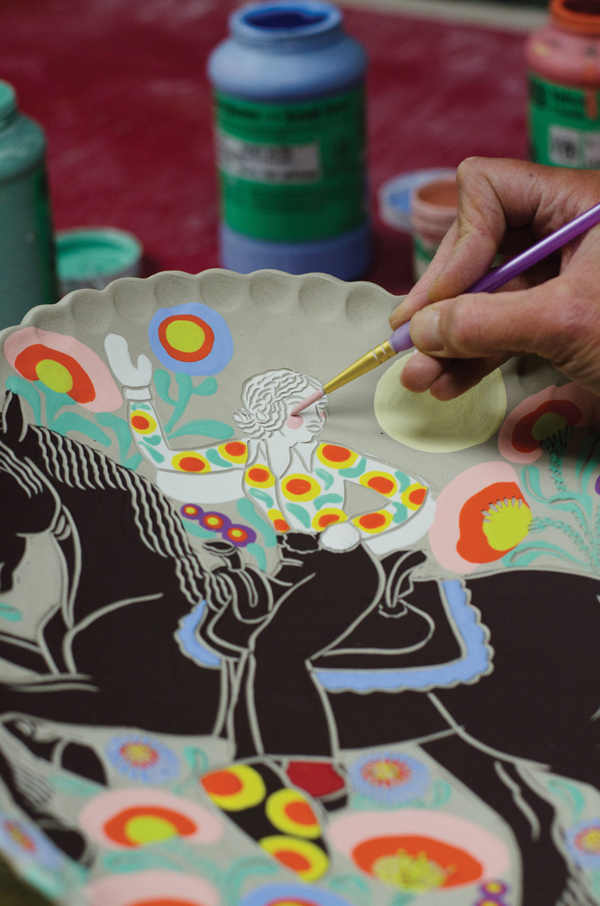 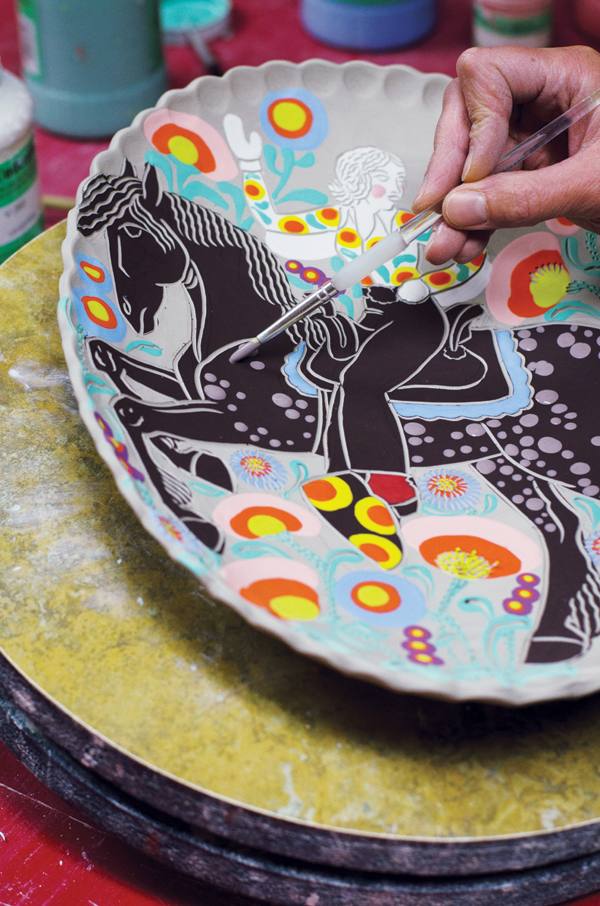 All of Tirrell’s work is fired in oxidation and produced using a mid-range porcelain clay body. She bisque fires to cone 04 and glaze fires her ware to cone 6 in an electric kiln. Tirrell throws her bowls, mugs, and pitchers on the wheel. She handbuilds her plates and platters using slabs and coils on top of an unfinished drywall work surface. After the underglazed greenware is bisque fired, the pieces are dipped in a food-safe clear glaze in preparation for the final firing. 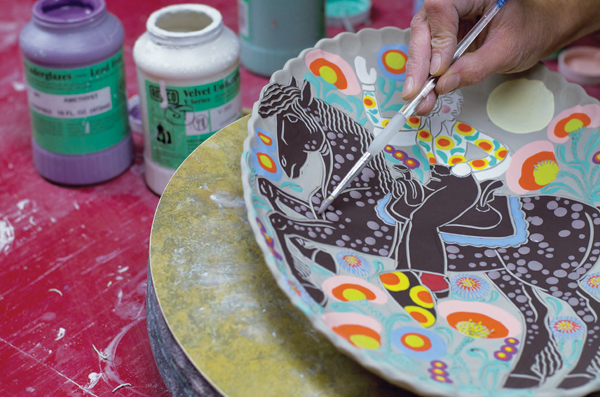 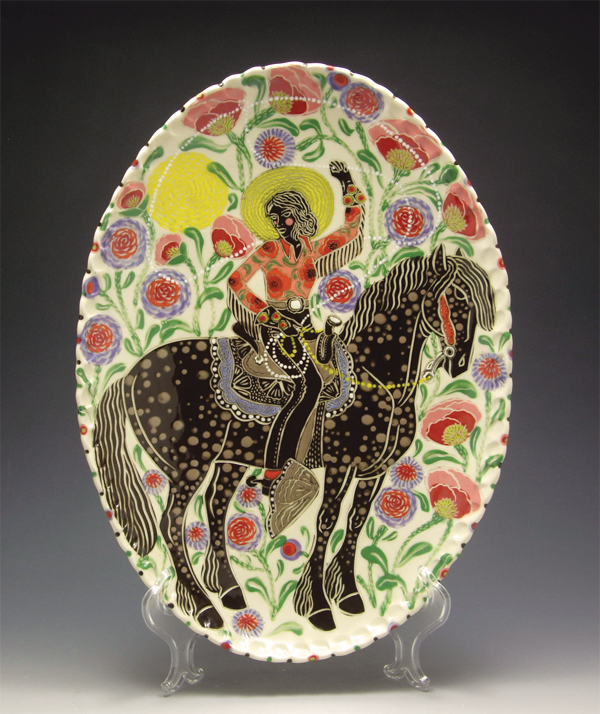