I have been messing around with crazing as a deliberate decorative effect lately. Though it is technically a glaze defect, crazed surfaces can actually be quite beautiful and I have really been enjoying the depth that crackling can create.

But the crackle surfaces I have been creating pale in comparison to the Snowflake Crackle glazes John Britt writes about in the Ceramics Monthly archive. As you can see here, these crackled surfaces are pretty spectacular! Today, I am giving you all a peek at that article, which includes lots of snowflake crackle glaze recipes! - Jennifer Poellot Harnetty, editor.

I only had a brief glimpse of this glaze some 15 years ago in a museum gift shop. It was on a little Sake set in a traditional Japanese wooden box. It was glazed with the most beautiful crackle glaze -- not the usual crackle glaze that is common in Raku. It had a conchoidal fracture with the crazes layered on themselves like a stack of books that had slid over. Only later did I find out that this glaze was called Snowflake Crackle; actually, it has many names (Snowflake Crackle, Fish Scale Crackle, Ice Crackle, Ice-like Crazing, and Tortoise Shell Crackle), which is generally a sign of how much people like something.

Regardless of what you call it, it’s a crazed glaze that is applied so thick that the fractures run not just vertically but horizontally. These crackle patterns can be large or small, and they are distinct hexagonal shapes. When they are large, it is easy to see why it is sometimes called Tortoise Shell Crackle. It is often said that, if you don’t like it, you call it crazing; if you like it, you call it crackle. Crazing is often thought of as a glaze defect, but as Nigel Wood describes in his book Chinese Glazes, the Song dynasty potters are thought to be the first to treat crazing as a decorative effect.

Commonly called Guan (Kuan) Crackle, the Ru, Guan and Ge ware were all beautiful examples of crazing as a decorative technique. In a specifically beautiful type called “iron wire and golden threads,” or “golden floss and iron threads,” the larger cracks, or primary cracks, were stained black while the pots were still hot. The smaller, secondary cracks developed over months or years as the delayed crazing occurred, leaving them brown.

Almost everything (except rubber and ice) will expand when heated and contract when cooled. When a clay body and a glaze are fired on a pot, they fuse together. As they cool, if the glaze contracts more than the clay body, it cracks or crazes. If the opposite occurs and the clay body contracts more than the glaze, the result will be shivering, where the glaze will actually pop off of the pot. But if there is just the right amount of compression between a clay body and a glaze, it adds strength to the piece. Crazing is usually thought of as a glaze defect because the piece can be approximately 75 % weaker than its uncrazed counterpart. It is also thought that the craze lines can harbor germs or bacteria.

For these reasons, dinnerware suppliers like to provide uncrazed ware. Snowflake crackle is the most extreme kind of crazing, where the glaze is applied so thick and the fit with the body is just right so that the crackles appear to lay on top of one other. The glaze can be twice as thick as the body, just like during the Song dynasty. According to Nigel Wood, in order to get the glaze thick enough, Song Dynasty potters often bisque fired pieces between glaze coats.

A crazing pattern is always the result of the relationship/marriage between the expansion and subsequent contraction (governed by the coefficient of thermal expansion, or CTE) of a clay body and a glaze. By knowing a little about the CTE of oxides, you can easily control the crackle pattern in glazes to create any range of crazing from very small to very large crackles.

Since a glaze is a collection of oxides with a variety of CTEs, knowing that sodium oxide has a high CTE and magnesium oxide has a low CTE allows you to control the overall CTE of the glaze by adding one or the other. As a glass, silica has a low CTE (it is amorphous), but as a crystal, it has a high CTE. So adding silica to a glaze can lower its CTE, because the silica melts to its glassy state. While adding silica to the clay body (where it remains a crystal) can increase its CTE. It is important to keep the firing cone consistent as heating the piece a cone higher will result in melting more of the silica in the body to glass, thus lowering its CTE.

Similarly, firing to a lower cone will melt less of the silica in the body giving it a higher CTE. The time and temperature of the firing is extremely important to the CTE of the clay body and thus to the crazing pattern. Since seeing this glaze in the museum store, I tried many potential recipes with only moderate success. Since I couldn’t get anyone to share their recipe with me, and I had no understanding of the principles of how to achieve this effect, I postponed my search, but in the back of my mind I remembered this beautiful glaze.

Fast forward about fifteen years to a workshop I was giving last year. I assigned a student a series of tests to improve a magnesium crawling glaze (a.k.a. reticulated glaze) that she was working on in cone 6 oxidation: SDSU CRAWL/BEADS - Cone 6 Magnesium Carbonate 25% Nepheline Syenite 70% OM-4 Ball Clay 5% Total 100%

I had her make up the glaze without the magnesium carbonate and then add it back in 5% increments up to 40%. She then dipped tiles of stoneware, dark stoneware, and porcelain. Fortunately, one of the clay bodies she was using was a very dark low-fire Redart body that she liked to fire to cone 6 (it is rated from cone 05–6). When the tiles came out of the firing, my eye went immediately to the 5% magnesium carbonate test on the dark body; it was Snowflake Crackle! What a stroke of luck. Unfortunately, I didn’t care about her reticulated surface anymore, as I was so excited about this crackle pattern.

When I returned home, I tried the glaze on a variety of store-bought cone 6 clays. The best, in terms of CTE, were Highwater’s Earthen Red and Brownstone at cone 6, and Orangestone at cone 10. There very well may be others that work, but these were the best of those I tested. Since potters today generally buy premixed clay bodies rather than making their own, changes in CTE are usually made to the glaze rather than the clay body.

This glaze crawled a bit, so I decided to remove the magnesium carbonate (because it has such a high shrinkage) and substituted talc. While I was analyzing the glaze in Insight (a glaze software program), I decided to look at the CTE numbers, which were around 8.59 (Insight CTE). I then constructed about four glazes with similar CTEs, between 8.59 and 8.70. I came up with several nice glazes this way, but I also tested the original recipe with a simple progression of Ferro frit 3124, just to see if it would melt a bit more. The result was a nice transparent Snowflake Crackle with 8% frit.

The first thing I noticed when I did color test with the usual colorants and opacifiers (copper carbonate, red iron oxide, chrome oxide, stains, zircopax plus, etc.) was that, as the color improved, the crazing ceased. This was because all oxides have expansion/contraction rates and adding them changed the CTE of the glaze enough to stop the crackle effect. I ran more tests with very low levels of colorants (under 1%), which kept the crazing yet still produced a nice color. 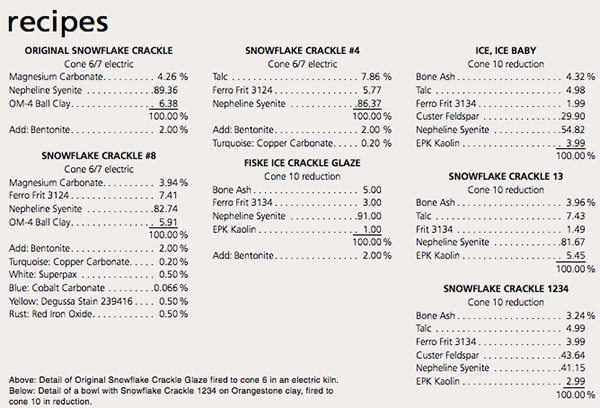