Connecting the Dots: Slip Dotting and Feathering How to Create the Feathered Look with Slip! Elizabeth Sparks

While in graduate school, Elizabeth Sparks became interested in traditional slipware pottery. So she tore through books and magazines to learn about the technique. She combined that research with an interest in using local raw materials.

In today's post, an excerpt from the Ceramics Monthly archive, she shares her slip dotting and feathering techniques.- Jennifer Poellot Harnetty, editor

This particular approach to using slip was born during graduate school at The New York State College of Ceramics at Alfred University, in Alfred, New York, where I was encouraged to look beyond the surface of what I like and to really understand why. I began using the local Alfred clay there, designing a new glaze palette at cone 3, and studying old slipware pots. I learned the techniques of feathering and marbling from an old magazine. I then tore through books and ceramic history while gaining an awareness of the process of inquiry, going deeper and allowing my work to come from within after digesting all the research. Creating patterns with dots came from a sense of play and discovery, and has been an exploration ever since. I have to be totally present and mindful to execute the pattern well, and the best ones come out differently than originally planned. Geometric structures and plant life are the main themes.

For plates, I begin by pounding out enough wedged clay to make multiple slabs at once. I pound it to a circular shape about an inch larger in diameter than the mold I will use. This allows for some shrinkage, some curvature, and a way to crop the image nicely later on. I then use slab cutters, made from notched wooden sticks and a cut-off wire to cut 3⁄8-inch-thick slabs (1).

After cutting the slabs, I compress the top surface before taking it off the pile, then flip it and compress the other side. I put each slab on a bat and trim it to the edge of the bat so it is perfectly round.

I pour a base coat of slip onto the slab (2). The slip is thick enough that it stays wet while I feather the added dots or lines before they dry. I create a slip using a light clay body and a dark clay body with the same shrinkage. Alternately, you could choose a slip recipe with a high amount of silica, as this allows the slip to be thick without cracking as it dries. 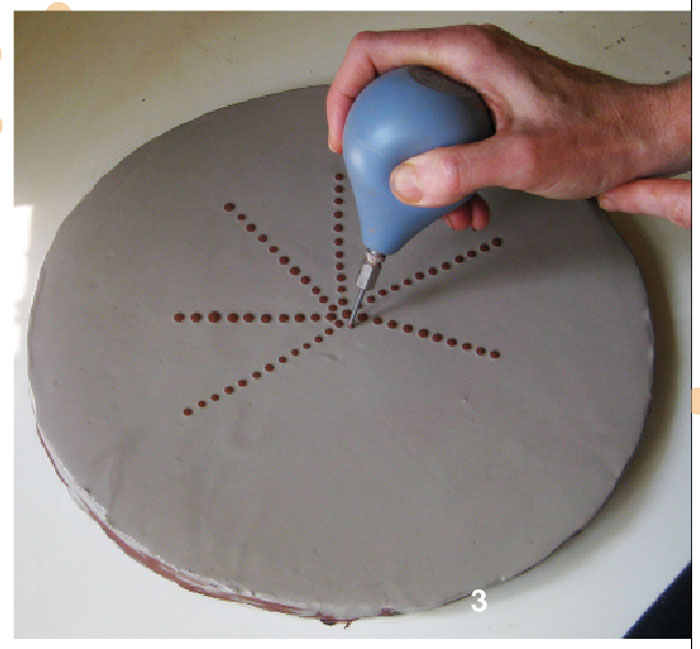 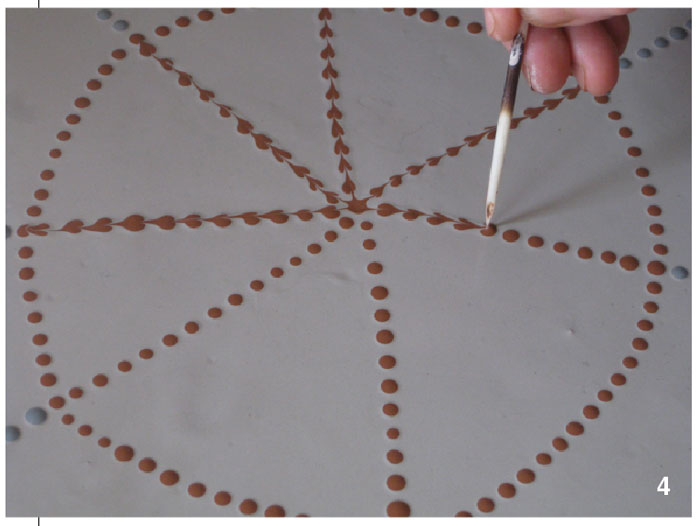 I then begin applying the dots in different colors of slips on the base slip (3). I like to use a few different kinds of slip trailers in order to get a variation in the size of the dots. Metal-tipped bottles are nice, as well as simple ear syringes from the drugstore.

I then feather the dots by dragging through them with the fine tip of a porcupine quill (4). I do this first, while the slip is the wettest. After completing the outline, I fill in the pattern with dots that will not be feathered (5–6). 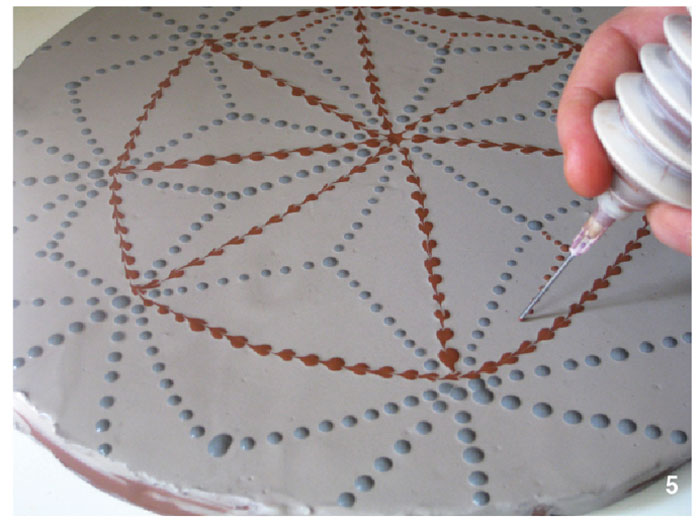 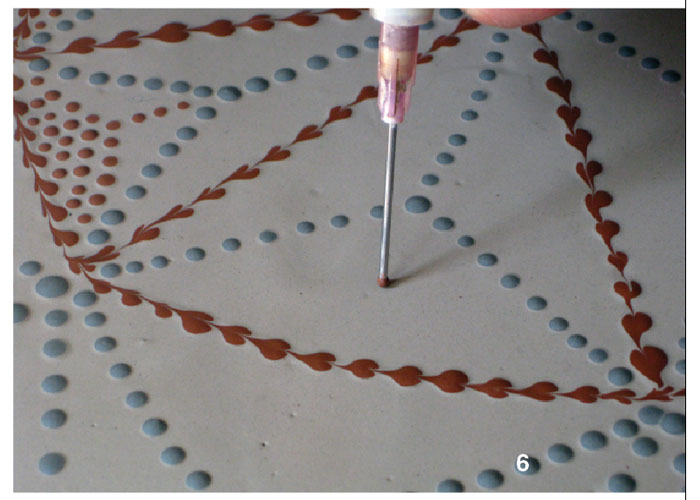 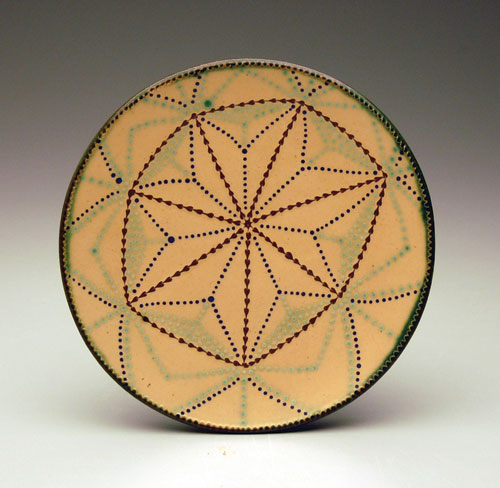 I use a cone 3 clear ash glaze over the decorated surface. Some slips flux more than others in the firing, and I like the way that some of the pattern is clear while other parts are slightly blurred. Still, my favorite phase of each pot is right after the slip has been applied and is still wet, showing the traces of each moment and glistening with potential.

the author Liz Sparks is an artist and teacher. She has taught at Montana State University and Penland School of Crafts, and is currently living in Pune, India, researching pottery and teaching at Door Step School, an NGO for underprivileged children. www.lizsparks.net.