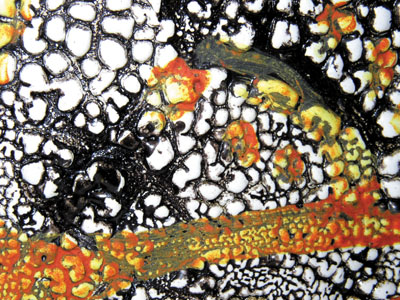 Have you ever mixed or purchased a glaze, put it on a piece that you had been saving for that super-successful-surface-treatment that was going to take your work to that next level, break through that barrier you had been struggling against, make you rich and famous? Well, I have. I was living the good life in my head as I was glazing the piece. I was thinking of all the shows I was going to get into, all the awards I was going to win. Guess what—it didn't work. It's not that the glaze didn't work, it's that my expectations were so high that I could only be disappointed by the result. What I learned was that glazes are great, but it's what you do with them that really makes a piece interesting—makes it your own.

This approach requires a good understanding of materials, but it also demands that you experiment and let go of that sense of preciousness with your work. This may mean subjecting a pretty good piece to another firing, another glaze, another technique, risking a partial success for the promise of a greater success. It may not work the first few times, but sooner or later, you'll learn something that is all your own, and you will be at that next step in your journey. You'll lose work that you put a lot of time into, but it's worth it.

Here, Nicole Copel describes how Yoshiro Ikeda has worked out a system of multiple firings that allows him to assess the application of glaze at each stage of experimentation. More important than his glaze recipes (at the end of this feature) are his techniques for using them. — Sherman Hall, Ceramic Arts Daily

Yoshiro Ikeda has developed a process for making ceramic art that allows him to leave his work and respond to the unpredictable demands and responsibilities of a studio professor. His students can attest to the small space he occupies when working and the simplicity of his artistic tools. His workspace typically consists of a chair, a bag of clay, a handful of tools and a plastic bucket he uses as a work surface. In addition, he works in relatively short blocks of time. 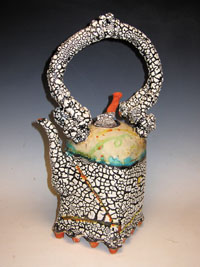 He uses brushes to apply multiple layers of glazes, including his signature Crackle White glaze. This glaze has been formulated to separate into irregularly shaped beads, revealing the clay body below the glaze. The crackle glaze emphasizes textures and patterns unique to the surface treatment of his pieces. The Process Yoshiro builds most of his sculptures and teapots using Soldate clay, which is bisque fired to cone 06. He then marks out compositional elements with a pencil (figure 1). After the surface design is drawn, he applies Crackle White Glaze to the sections where there are no markings using a hake brush (figure 2). 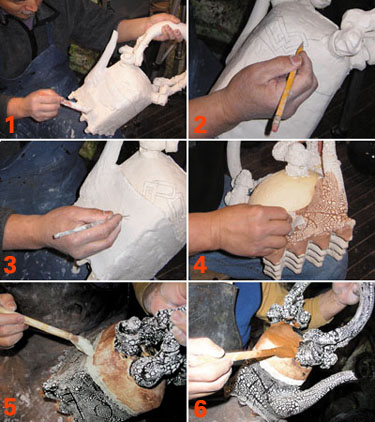 After the initial glaze application, Yoshiro draws a needle tool through the glaze to create expressive cut lines (figure 3). He then fires the piece to cone 02 in an electric kiln. After the first glaze firing, Yoshiro brushes his Black Glaze over the fired piece, filling deep crevices where the clay body is visible. After approximately twenty minutes, he wipes away the Black Glaze leaving it in the recessed areas (figure 4), then fires the piece to cone 03.

Because the high-fire clay is fired to a low temperature, it does not completely vitrify and is therefore able to absorb additional glaze. Where the crackle glaze ends and the unglazed surfaces begin, Yoshiro applies a line of Matt Copper Blue Glaze with a brush (figure 5) and refires the piece to cone 03. Firing in between applications allows Yoshiro to see the results of the glazing before proceeding to the next glaze application and firing. In this example, Yoshiro brushes Yellow Ochre and Iron Glaze onto the unglazed top of the piece and refires to cone 03 (figure 6). When he wants to achieve a more mottled effect, he uses a thick application of this glaze. Thinner applications result in a light brown shiny surface. 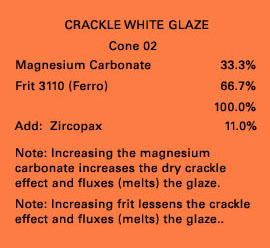 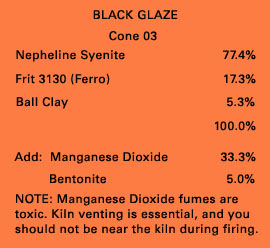 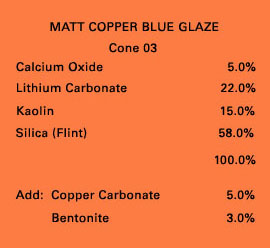 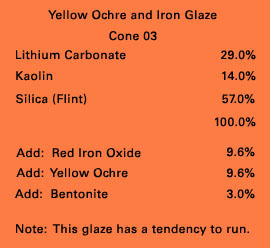