Being Green in the Pottery Studio John Britt 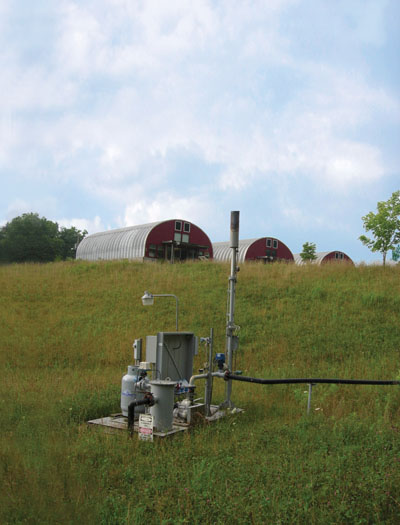 After running Wednesday’s feature on Practicing Safe Raku, a reader inquired about the environmental impacts of raku firing. Coincidentally, Earth Day was this week, so I decided I would dedicate this feature to green issues. Sadly, ours is not the greenest of art forms -- from using fossil fuels to fire kilns, to working with materials that are strip mined. For potters and ceramic artists, if I may quote Kermit the Frog, “it’s not easy being green.”Or is it? Readers, this post is not going to be all gloom and doom.

Resourceful potters and ceramic artists are constantly trying to come up with ways to lessen their impact on the planet. In fact, in the May 2007 issue of Ceramics Monthly, John Britt contributed an essay to the Comment column, which suggests simple changes that potters can make in their studio habits to help make their practice more Earth friendly. I am excerpting a couple of highlights from his essay here. –Jennifer Poellot  Harnetty, editor 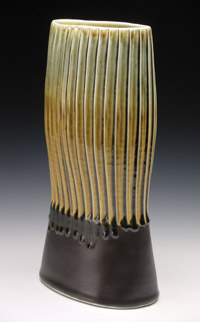 Ceramics Monthly dedicated its December 2007 issue to sustainability, and going green is on everyone’s mind these days. The ceramics process has limits in that regard, but that doesn’t mean we are exempt from making an effort. The articles in that issue were interesting but the solutions involved major projects like building a new kiln, moving to a landfill or firing in a neutral atmosphere. These solutions are impractical for most potters, but the issue prompted me to think of simple changes that most potters could make to save fuel without major disruptions to their lives.

One of the easiest ways is minimizing the number of kiln shelves in each firing. Shelves have a great deal of mass, and heating them up takes tremendous energy, so bisque firing without shelves (a.k.a. tumble stacking) will save a lot of energy. If you can’t tumble stack the entire load, then just try to reduce the number of shelves.

Using thinner shelves also reduces mass, as will exchanging the hard brick in a gas kiln bag wall with soft insulating fire brick (IFB). They will still serve the function of the hard brick bag wall, but they will take less energy to heat up. If you want to go further, consider eliminating or minimizing the number of bricks in the bag wall. Or, instead of using whole hard bricks for posts, try using soaps. Anything that has less mass but still supports the stack will save energy and time.

With electric kilns, you should make sure your lid fits tightly. Some lids can rise slightly (up to 1/4 inch) during the firing, which wastes a lot of heat. A number of them have adjustments in the back but I secured mine with a brick on the edge. In addition, make sure you put the spies in during the bisque. Potters often leave the spies out during the initial stages of the firing to allow water vapor and gases to escape. But, since we fire on automatic, we often forget to put them back in during the firing.

Learn the dynamics of the firing cycle. If you know what is happening during the firing cycle you can make adjustments that will save energy. For example, if you notice little black spots on the side walls of the pots in the early stages of a bisque firing, this means that all the water has left the ware and you can safely turn the kiln up without fear of pots exploding. If you are merely holding the soak for the sake of tradition, then you are using energy for no reason. Alternatively, some people hold a mirror in front of the spy holes to see if there is any condensation. If there is no evidence of moisture, they know that the water is out and the kiln can be turned up safely.

Eliminate long overnight warm-ups or pre-heats. These are generally maintained out of fear rather than necessity. Heating the kiln up overnight to 1300° F and holding it for four hours (until the person firing arrives in the morning to finish the firing) is a waste of energy. Most kilns can be started cold in the morning and fired off in 10–12 hours without any problem. Once the water in the glaze coat is gone, you can heat the pots up relatively quickly. This doesn’t mean that you have to eliminate the glaze soak or that you cannot slow things down towards the end, but it does improve the efficiency of the firing. You can go relatively fast during the initial stages of firing if the pots have already been bisque fired. I usually reach 1300° F between the second and third hour.

Finally, an easy way to save fuel is to buy locally. It is difficult, if not impossible, for most of us to dig or mix our own clay, so we buy clay from suppliers. Often the ingredients come from across the globe, like kaolin from England or New Zealand. Sometime this cannot be helped because the material provides unique qualities we want, like translucency. These dry ingredients are shipped to suppliers who mix the clay with 25–30% water, which is very heavy (8 pounds per gallon). Buying clay that has been mixed locally will save the energy that it takes to ship all that water across the country.

These are just a few of the things we can easily do to save fuel without any major inconveniences.