Jali screens are traditional architectural forms used in Islamic architecture to promote air ventilation or create semi-private partitions between rooms. While in school for ceramics, Pakistani potter Muhammad Hassan Kashigar, decided to embark on a project that combined traditional forms with contemporary ideas. What he came up with was his own take on the tradition Jali.

In today's post, he takes us through the process of creating one of his beautiful screens. - Jennifer Poellot Harnetty, editor.

Born into a family in Sindh, Pakistan that has worked in clay for many generations, I was not only introduced to clay very early in life but was also inspired by the detailed sensitivity of ceramic art and the flexibility of clay as a material. I later studied ceramics at the National College of Arts Lahore in Pakistan. While studying, I always knew that I had to do something which would take the existing family tradition a step further, and wanted to create a ceramic form which was rooted in tradition but contemporary in scope. I decided to do this by designing and creating ceramic screens or jalis.

The use of the jali has been primarily confined to architecture where its been used for centuries as a medium for air ventilation and, like lattice work, to create semi-private partitions between rooms or to divide larger spaces into smaller areas. Today they are made in various materials: cement, marble, limestone, wood etc., and each material has its own beauty. Traditionally they were also made in clay, but today, most people tend to make and use cement jalis instead. 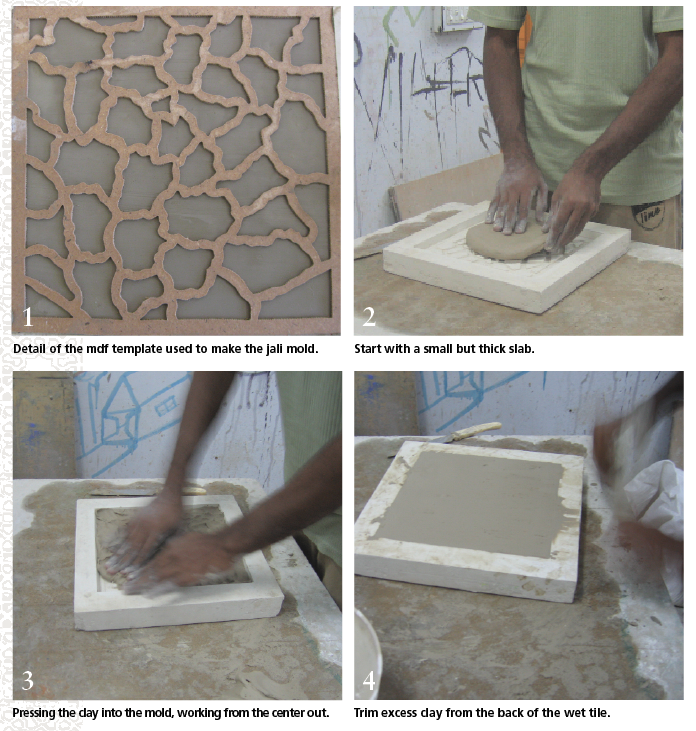 Design My work is based on nature. Not as we see it, but rather what it’s made up of, how it is seen from both the microscopic level and viewed from a distance. For my project, I conducted research on jalis in Mughal and on other Islamic architecture, and combined it with my interest in nature, taking references from organic forms. Since the final pieces would be modular, I also studied the geometric forms in Islamic patterns upon which much Persian art is based. I sought to mirror its beauty and appeal. Once this research was completed, I began to transfer what I had learned into my work. As a resource for my own patterns, I enlarged the intricate web of arteries that compose a leaf, which is a theme constantly repeated in many traditional motifs. Similarly, I look to other organic forms and look at the magnified details of their structure. Going in the opposite direction in terms of changing the scale, I studied road maps and international boundaries of countries in the world maps as seen from a great distance, and found similarities in both.

I transformed these complex networks of lines into my designs for screens. I did not consider it important that the resource that inspired my design was recognizable to the viewer. What is more important is that the pattern is fluid, that each jali fits in a modular fashion with its counterparts, and that functionally the designs on the jali accommodate desirable air movement.

To make the jali, I start with a sturdy template. I had a die cut out of my design on a sheet of 1/8-inch thick mdf (figure 1). I then placed this on a leather hard clay slab and poured plaster over it to make a one-part press mold of an openwork tile with a solid clay border. Then, I repeated the procedure using the same template die to make the mold for the mirror image of the pattern. This second openwork tile, when attached to the back of the first after clean-up, gave the right depth needed for the jali (figure 2).

After drying them, I pressed slabs into the two molds (figures 2 and 3). In order to make the jalis immune to erosion or corrosion at the hands of forces of nature, I used porcelaneous stoneware clay for the slabs. It is more vitreous and therefore water resistant and prevents any seeping or migration of soluble salts to the surface. I then trimmed the excess clay while it was still reasonably soft (figure 4). A straight edge or board works well for this. I left the two jalis in the mold until they were leather hard, flipped them over onto a board (figure 5), and cleaned up the excess clay between the openwork on the lattice pattern (figure 6). I then scored and applied slip to the backs of each (figure 7) and joined them together (figure 8).

After joining, I left the jalis to dry further for a couple of hours before trimming the edges at a 45° angle with a knife to clean them up and ensure a good fit with the other jalis. After three days of drying in the studio, I took the greenware jalis out in the sun. When it was bone-dry, I finished it using sandpaper, files and other abrasives (figure 9).

The design of each unit is asymmetrical and once coupled with another jali after firing, the individual modular units becomes a continuous pattern that symbolizes organic growth, which stands at the core of my nature-inspired concept.

The finished screen is double-sided and gives a glazed and a non-glazed effect on either side. The strength of each fired module is created by its 4-sided border, which reinforces the fine lines of the vein-like pattern. The tiles can be held together with a wooden frame, or attached using mortar and reinforced with a frame structure. Test different types of mortar or ask your local home center for advice on suitable mortars and adhesives.

I hope people are inspired to create and use this new design for jalis in their homes and buildings, as the ceramic jalis are both pleasing to the eye and creative in technique.

Muhammad Hassan Kashigar is a ceramic artist and writer living in Lahore, Pakistan.