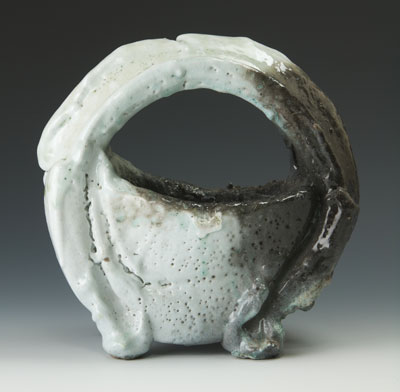 In my last firing, I made a pot that satisfied me like none before. It was one of those miracles where a good form and an even better firing combine with a dollop of serendipity. On a whim, I yanked the piece out of the kiln on the last day of a six-day wood firing. As I watched it cool from red heat into glacial blues, whites, and blacks, I was overcome with both a feeling of accomplishment and a vision of a new and exciting direction for my work.

It had been a while, though I used to get that feeling quite a bit when I first started firing my kiln, an anagama I built in the Tanba region of Japan about twelve years ago. In early firings, I'd get some good pots, a lot of bad pots, and usually one or two truly wonderful pieces. The good pieces sustained me through the tough times of learning how my kiln worked and, over time, the amazing piece from one firing would become the norm in later firings. For the last few years, however, I've been getting a lot of good pots and some great pieces, but no totally unexpected beauties.

The vase in question has a basket shape, and I call it the Kelly bag. When I first made this form, many years ago, Hermes had just opened its Japanese flagship store in the Ginza. To commemorate the opening, the firm offered a limited edition of one of their most famous bags (named after Grace Kelly) and the media was filled with pictures of Tokyo women lined up around the block for the privilege of dropping several thousand dollars for one. The shape of that first vase was coincidentally similar to that bag, and although recent iterations bear almost no resemblance to the early ones, the name has stuck.

Pulling pots out of a hot kiln is known in Japan as hiki-dashi. I imagine it was originally done to gauge the progress of a firing, to see if the glazes matured, or how much ash had accumulated. I was taught the technique by Peter Callas, who has turned the technique into an art form.

I hadn't planned on pulling this piece. I always pull a few black glazed pots (hiki-guro) at cone 6 and also a number of natural ash pieces throughout the firing (mostly sake cups, teabowls, and the occasional small vase) but never a shino-glazed piece [see John's Snowy Shino recipe]. As I was trying to get a teabowl out, it dragged a glazed sake bottle (tokkuri) along with it, and I broke the teabowl in the kiln trying to separate the two.

Cussing to beat the band, I decided to yank out the tokkuri in order to get it out of the way so it wouldn't stick to another pot. Almost unnoticed, it cooled to a glacier-like white with hues of blues and purples blending into coal-glossy black. These colors astounded me, and my mind went into overdrive searching for what else with that glaze was within reach.

I raced to my computer, which had photos of the loading. One showed a Kelly bag on the floor with the same shino, but it was fairly big and I doubted it would fit out the stoke hole. I looked further back in the library and found a shot of me at the wheel with the Kelly on a shelf behind. Next to it was a box of Kleenex, and that was all I needed to see. Estimating shrinkage, I calculated the Kelly would fit with less than an inch to spare, and decided to go for it.

Properly suited up, I reached in with my thickest stainless rod. I hooked under the handle of the Kelly and pulled. It was stuck pretty well but finally started to give, like gum on the bottom of a shoe. I knew I was running out of time (you only have a couple of minutes until the rod goes limp from the heat) and, sure enough, as I got it closer to the door, the rod started to bend.

I yelled at my assistant (ironically, named Kjell) to get ready with a couple of sturdy sticks. Kelly made it to the door, but the foot of the pot scraped along the bottom bricks with millimeters to spare at the top-I had forgotten to take into account the wadding! Somehow, Kjell caught it as it came out and we wrestled it down onto some bricks, Kjell getting a nasty burn on his finger in the process. We then watched in awe as it cooled into one of the finest pieces I had ever made. Soon, we were calling it "The Game Changer" for the possibilities it opened up.

Over the following weeks, the Kelly became more of a game winner than a game changer (I'm much more comfortable with sports metaphors than zen parables). It felt like a victory-a payoff following years of experimentation and struggle. I think most athletes would say it wasn't luck or God that made victory possible, but years of hard work.

Like most of my work, the Kelly vases started as a rough concept that needed time to evolve. I look back at the first prototypes now and cringe; they were way too cerebral. After each firing, though, my self-critiquing informed the next series. More importantly, repetition honed my technique. The mechanics of making moved from the mind and into the gut, and that is when my work starts to get strong.

What really knocked the new Kelly out of the park (sorry), was how the shino came out. About half the pots in my kiln are glazed with one of two types of shino, the rest having no glaze. For functional ware, I use an American-type shino, which is spodumene, nepheline syenite, and soda feldspar, and the pieces are fired towards the back of the kiln, which is cooler and receives less ash. More important pieces, however, receive what I call Snowy Shino, which is a local feldspar with a bit of kaolin added. It needs more heat and ash before it starts to get interesting, and I fire these pieces near the front of the kiln, around the firebox. The result is a rich, white matt glaze with tinges of blues and purples where the ash accumulates.

The winning Kelly had thickly applied Snowy Shino. The sudden extraction and cooling gave it a glossiness that radiated as if it were lit from within. This look is distinct from all previous Snowys that have ever emerged from my kiln, and, in fact, stands apart from any shino I have seen anywhere.

This vase monopolizes my thoughts. Can I pull it off again? How many can I get per firing? Can I enlarge the door? Would a stronger rod be too heavy? Two people, two rods? And so on. Needless to say, I won't sleep much until my next firing.

John Dix, an American from Flint, Michigan, has been making pots for 30 years-the last 20 in Japan. After spending 3 years in Bizen and firing in Shigaraki, he built an anagama-type wood kiln in the Tanba area near Kobe. He regularly exhibits in Tokyo and Osaka, and gives workshops in both Japan and the United States.