Bentonite is a great glaze suspender. To take advantage of this fine-grained clay requires a little study, plus careful, methodical testing in the studio.

Adsorb: Attach to the surface of something. In the case of kaolin, a kaolin crystal will adsorb many times its weight of water.

Bentonite: A very fine-grained clay formed when volcanic ash is weathered by being submerged in sea water. The weathering process removes flux elements and leaves behind a crystal matrix of alumina and silica.

Bentonite is an exceptional glaze suspender. That is, a small amount of it in a glaze recipe, say between 0.25–2%, will have a similar ability to suspend dry ingredients in a glaze as occurs with the use of 10% kaolin. There are two reasons bentonite works so well to suspend glaze ingredients. First, its particles are typically very small. Second, it absorbs water.

A 10% or greater addition of kaolin or ball clay is typical in many glazes. That amount suspends most glaze ingredients. It also helps the ingredients adhere to the ware. Kaolin and ball clay are much less expensive than bentonite. That’s why they are used unless their presence prevents achieving the desired chemistry for a glaze. Kaolin, ball clay, and bentonite are all aluminum-silicate clays. Replacing a larger amount of kaolin or ball clay with a much smaller quantity of bentonite may be necessary to make a glaze that is more fluid or melts at a slightly lower temperature. Glazes that use a significant quantity of very heavy colorants, such as iron oxide, may benefit from a combination of kaolin or ball clay and bentonite.

Kaolin particles are typically on the order of 10 microns in diameter. Ball clay particles are usually smaller but are still several microns in diameter. A micron is very small, by the way. A kaolin particle is roughly a tenth the diameter of a human hair. Good bentonites, however, are much smaller yet. They are typically less than one micron in diameter. This means that there are many more bentonite particles per unit weight than for the same weight of kaolin. The far higher number of bentonite particles helps to suspend other ingredients in a glaze.

Because dry bentonite absorbs water slowly, it is necessary to allow a mixed glaze made with it to rest for at least 24 hours to reach the full effect of the bentonite in suspending the glaze ingredients. However, if hydrated bentonite is used, the suspension effect will be observable immediately in the mixed glaze.

The resulting 1200 grams of hydrated bentonite will have the consistency of unset gelatin. Weighing out the gel as it is used makes it possible to know how much dry bentonite is being added to a glaze. For example, 300 grams of the gel will contain 1/4 of the bentonite (or 50 grams).

If you find you have a glaze recipe that settles out and you’d like to add bentonite to fix this, note that finding the right amount of bentonite for any particular recipe requires testing. Amounts between 0.25% and 2% of the weight of the dry glaze ingredients will suffice for almost all glazes. Generally, having more than 3% bentonite in a recipe will tend to cause glaze cracking during drying. That can lead to crawling of the glaze during firing. Testing how well a glaze suspends with bentonite additions in increments of 0.25% should permit an artist to arrive directly at a glaze with good suspension properties that uses a minimum amount of bentonite. 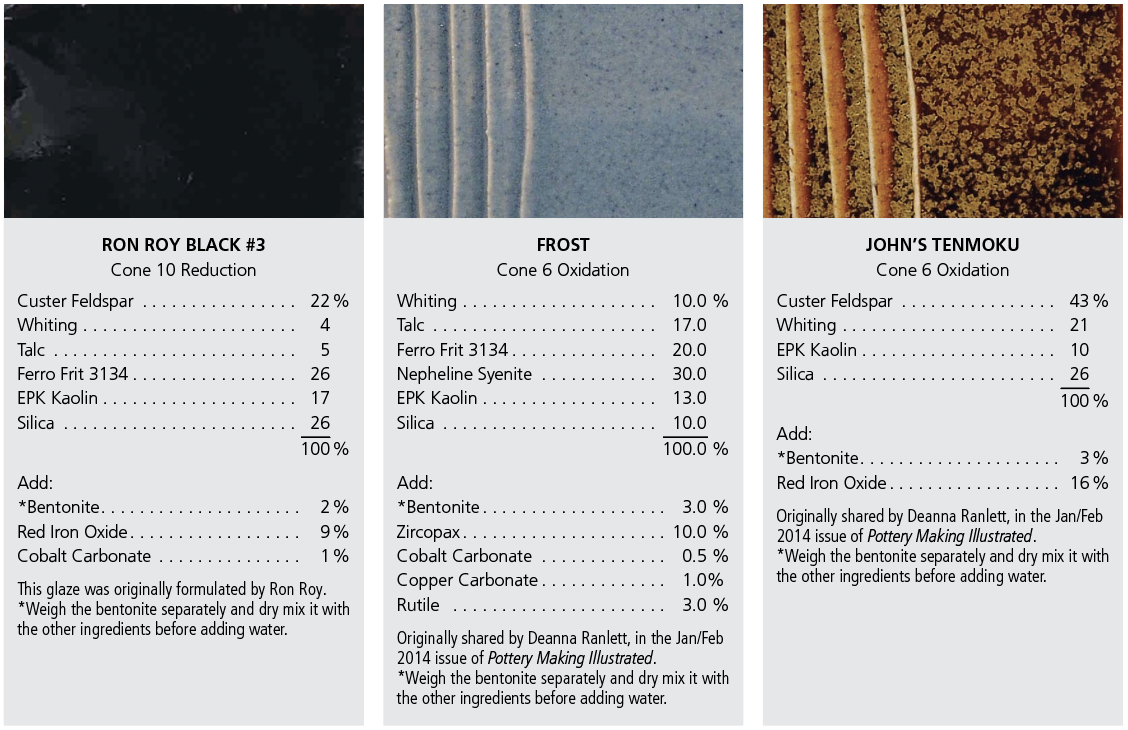 If a glaze contains too much bentonite, it will be slow to dry. On porous ware, an applied glaze should lose its gloss in a few seconds. If the glaze is still shiny wet after 10 seconds or more on the ware, the amount of bentonite in the recipe is excessive (unless, of course, the slow drying rate is intentional). If adding bentonite to an already mixed glaze, it’s best to make a few small test samples. Measure the drying time (preferably with a stopwatch) of the existing glaze on a bisque-fired sample of the work. Add increments of the bentonite to the test samples and measure the drying time on each. Watch carefully for an increase in the drying rate.

Including bentonite in a glaze recipe will help reduce dusting of the glaze when the work is being handled. Ball clay has a similar but less dramatic effect. However, replacing kaolin with ball clay should be done with the help of a glaze-calculation program. Ball clay can contain more silica than kaolin and that may change the glaze. On the other hand, replacing all or part of a recipe’s kaolin with bentonite does not require the use of a glaze calculation program. The amount of bentonite, if 2% or less, is small enough that the glaze chemistry change will not be noticeable. Changing 10% or more of kaolin for an equal amount of ball clay is a different matter.

When deciding whether to add bentonite first in tests, prior to trying to substituting out any of the clay content, I personally prefer glazes with only kaolin or ball clay and no bentonite. The latter is more expensive, it is harder to work with, and is another ingredient to deal with in the studio. But in cases where nothing else will do, then bentonite is very useful.