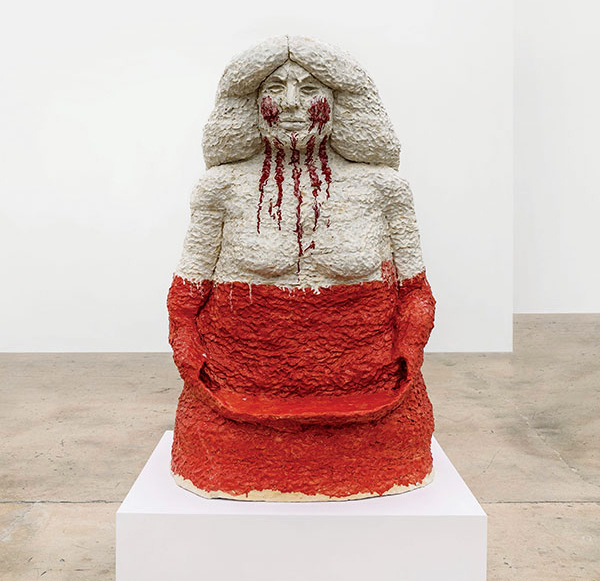 Every opportunity to view an artist’s work is an opportunity for deeper engagement. Especially when the artist takes on the complicated themes of identity, culture, and ethnicity. Unfortunately, Native culture is only given a passing glance in broader society and the majority of popular-culture platforms. Sensitive topics such as the historical injustices that have been enacted on the Tribes since settler encroachment receive even less play. Raven Halfmoon (Caddo Nation) is from Norman, Oklahoma, and is just finishing up a two-year residency at the Archie Bray Foundation for the Ceramic Arts in Helena, Montana. She is only one of very few Native artists who have historically participated in the prestigious international Bray residency program. Halfmoon is ambitious and focused, but easy to talk to and ready to engage in discussions about her artwork and heritage, which are lovingly intertwined.

An Expansion of Caddo Culture

The Caddo Nation is a sovereign political structure that exists within the confines of the US borders. Not many people think of Native people this way. It’s a designation complicated by agreements and negotiations with the US government and its policies toward Native people on issues such as treaty rights, healthcare, and especially the antiquated and racially problematic practice of blood quantum to determine Tribal enrollment and eligibility. The Caddo Nation is a confederacy made up of several southeastern Mississippian Tribes who historically occupied much of the eastern part of Texas, Arkansas, Louisiana, and Oklahoma. With reservation policies, the Tribe was first relocated to east Texas, and now centers in Oklahoma, where Halfmoon grew up. 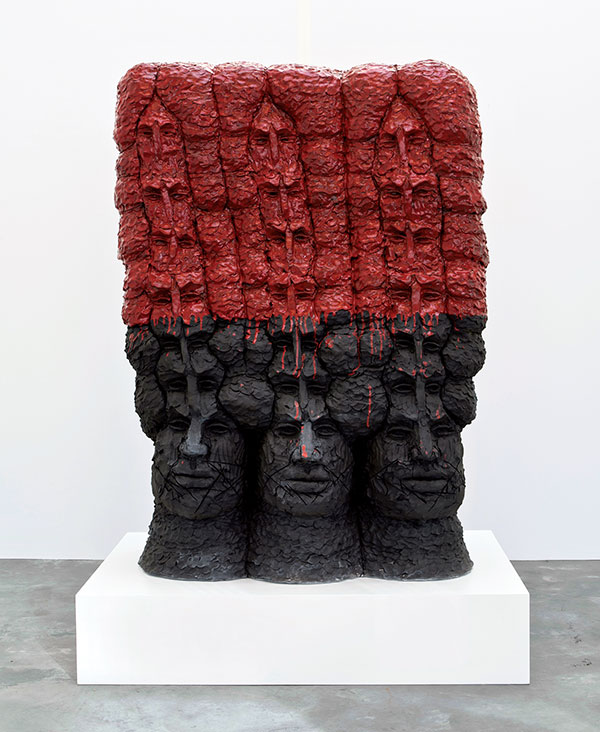 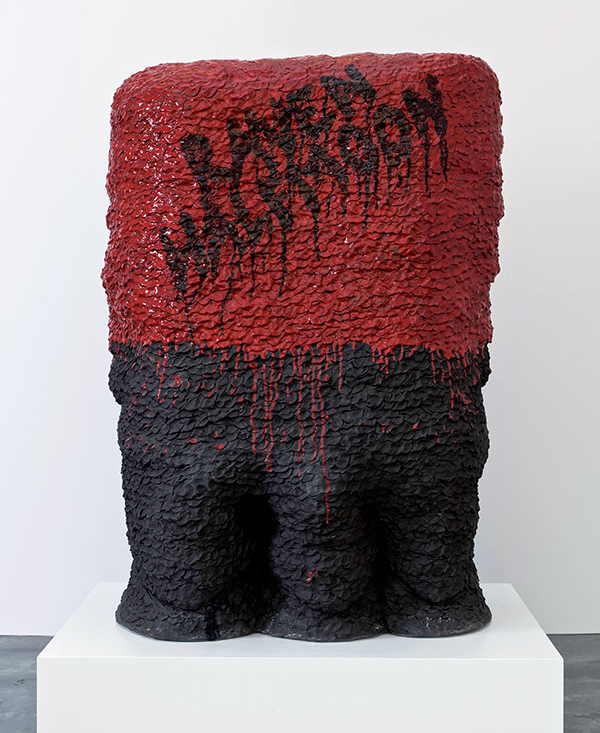 Halfmoon’s artwork is a continuance and expansion of contemporary Caddo culture with her vivid, monumental figurative sculpture. She attended the University of Arkansas, where she earned double bachelor’s degrees in ceramics and cultural anthropology, and delved into ceramics residencies immediately afterward. She has steadily gained momentum in her career with every passing year and garnered an impressive series of awards and accolades, including being named the 2018 Fund the Change recipient from the Activist and Social Justice Arts Organization in Oklahoma; a Burke Prize finalist at the Museum of Arts and Design, in New York, New York; an American Craft Council Emerging Voices Award finalist; and a Ceramics Monthly Emerging Artist—all in 2019. Last year, she was awarded a John Michael Kohler Arts Center residency (which is a shorter residency that she will fulfill concurrently with her 2-year Archie Bray residency). 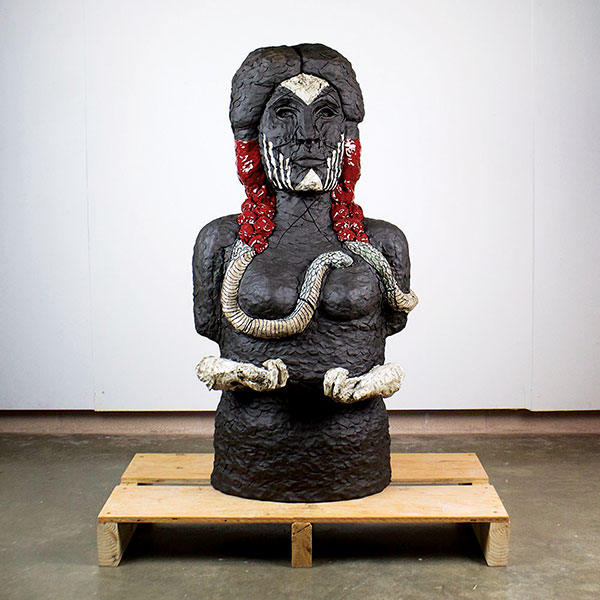 Halfmoon has recently felt compelled to increase scale in her work, with pieces now topping out at several hundred pounds and double-stacked tiers that rise over 9 feet tall. Her monolithic figures are memorable for their repeated features—rows of eyes, the copied visual staccato of parted hair extending like an impossible coiffure, duplicated and mirrored faces, each visage facing the opposite direction. Halfmoon handbuilds her sculptures using coils. Her approach to glaze is straightforward, take-no-prisoners. Thick areas of black, white, or red glaze cover parts of the surface, contrasting exposed areas of raw clay. 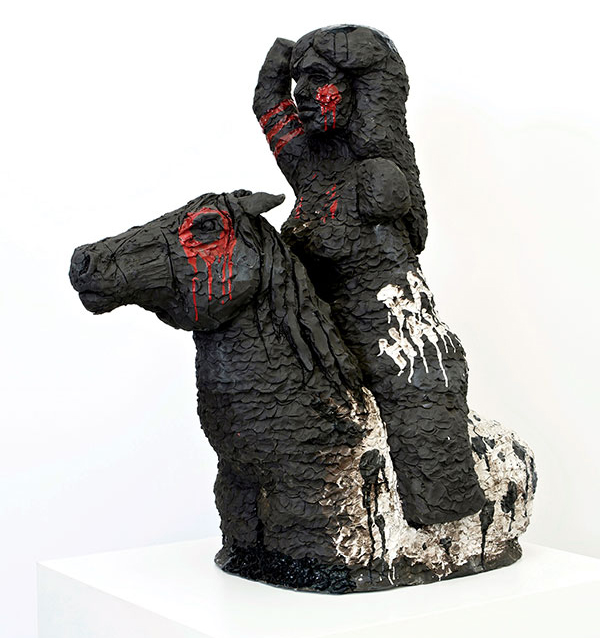 Rather than recreating historical forms drawn from the thousands-of-years-old tradition of Caddo pottery, Halfmoon uses portraiture in clay as her choice expressive media. Portraiture is reclaimed in Halfmoon’s work as an expression of Indigeneity and self-determination. In Allen Sekula’s 1976 manifesto Dismantling Modernism, Reinventing Documentary (Notes on the Politics of Representation), he calls for a “political economy, a sociology, and a non-formalist semiotics of media that could provide the framework for a critical representational art or art that points openly to the social world and to the possibility of concrete social transformation.” Halfmoon’s goal, as the maker of large-scale Caddo visages, is to change the world, one sculpture at a time.

Empowering from the Traditional

Halfmoon is less interested in recording specific people than suggesting an enduring lineage with Caddo ancestors real and imagined. She explains, “I consider [the sculptures as] multiple facets of me, but they also represent multiple generations—my great-great-grandmother, grandmother, my mother, my aunt, cousins, my ancestors, and what they’ve created.” The Caddo are a matrilineal, not patrilineal, Tribe. These large-scale portrayals of Caddo women are empowering, but also pull directly from Caddo tradition, stories, and mythology. 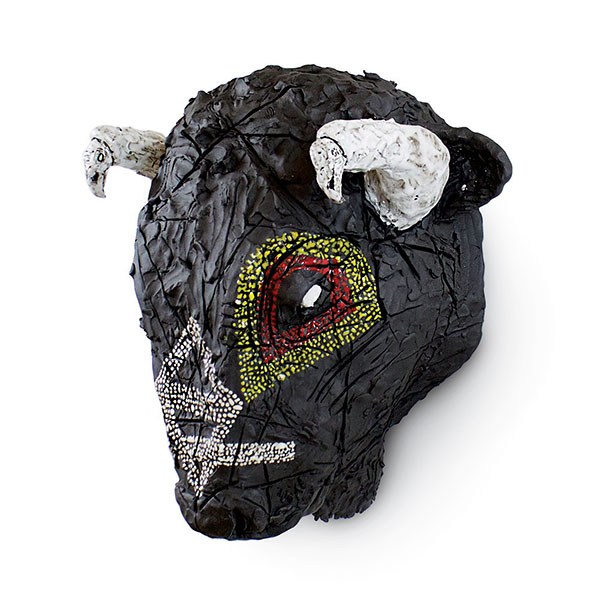 In fact, a whole body of work on the artist’s website is called “Caddo Origin Stories.” One of these imaginative pieces depicts Snake Woman, who was given seeds for all growing things and shared them with people, with the provision that until the seeds were ripe they belonged to her—a declaration she enforced with venomous snakes. Halfmoon positions Snake Woman as a contemporary expression of female empowerment and feminist ideals. She also created a bison head with vulture-tipped horns. Historically the Caddo only hunted woodland bison sparingly, and did not evolve a broad mythology, but Halfmoon adopts the bison and vulture to suggest a tight cycle of life and death in this poignant piece. Finally, Halfmoon depicts the bust of a wolf whose snarling mouth encloses a pair of human hands, trapping the person inside. With Wolf (Ta’-sha) Leads the Caddo People Out of Darkness, Halfmoon tells the Caddo story of the emergence of life from an underground cave located at the confluence of the Red and Mississippi rivers in northern Louisiana.

Halfmoon knows how words have power in history. Take the title of her first solo exhibition in New York City this year at Ross+Kramer Gallery, “Okla Homma to Manahatta.” The title combines two phrases, the Choctaw, from which the name of Oklahoma was derived, mashed with the original Lenape name for Manhattan, connecting her to her mother’s Lenape heritage. 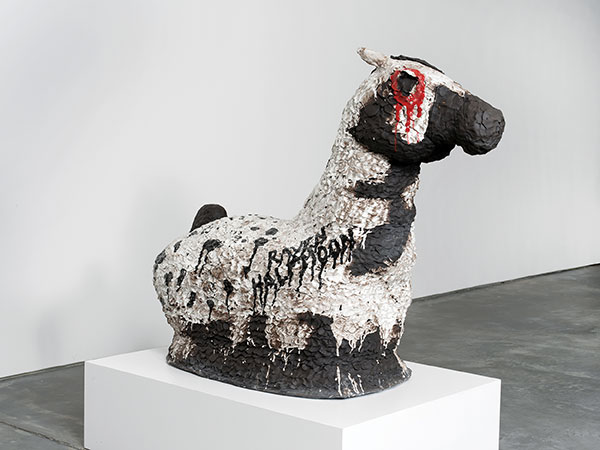 Sometimes Halfmoon scrawls declarations across a piece. Most prominent and jarring are the artist’s name in bold letters—an assertion of identity, determination, and agency—or pithy phrases that counter racism and stereotypes like, “you don’t look Native,” or “Do You Speak Indian?” Others are determinations of survivance and continuance, “Still Here,” “Immortal,” “Caddo,” or “Practice Your Culture.” The text serves to disrupt and complicate the visual narrative, and operates on a different level, in a different part of the brain, than her symbolic use of portraiture. Text on one of Halfmoon’s sculptures can be as jarring and poignant as the use of the red handprint painted across the mouths of those who mourn and remember missing and murdered Indigenous women and girls. Halfmoon’s text is an interruption, a correction, an assertion, a resetting of the record, a remembrance, a revolution.

One sculpture in particular is adorned with the mirrored, intertwined double-C monogram of the Coco Chanel logo, as if it were a fine handbag. Halfmoon flirts with combining high fashion and Native iconography together as if daring the viewer to claim that the two should exist in separate spheres, as if a reaction to this juxtaposition is a calling out or a reminder that everyone—White, Black, Asian, Hispanic, and Native alike—tends to stay in their lanes, seeking affirmation in what is familiar when what we really need is someone like Halfmoon to come along and refashion what the lanes look like altogether. Really, Halfmoon’s fascination with the intersection of haute couture and Caddo is an imagining akin to Afro- or Indigenous futurism, an imagining of the possibilities. Halfmoon sees fashion as fun and expressive, even when there is serious work at hand. 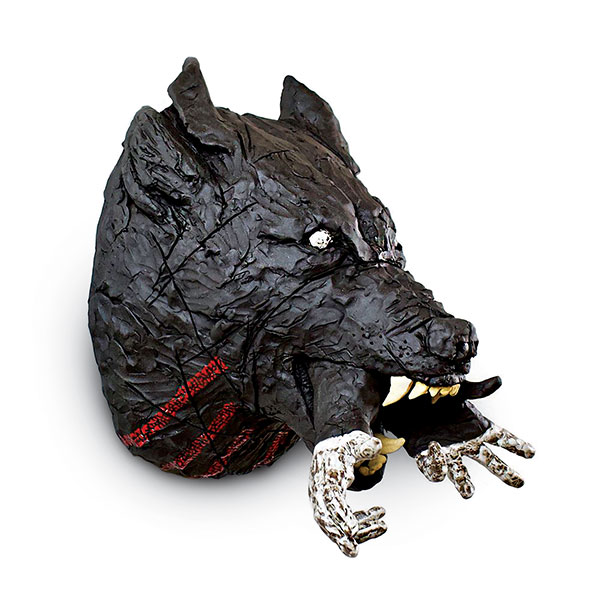 Recently, Halfmoon began making Appaloosa horses. The name is borrowed from another Tribe, the Apsáalooke or Crow, who are renowned for how quickly they integrated the horse into their Tribal culture, and whose name has become synonymous with this certain breed of horses (another spelling of the Tribal name, Absaroka, lends itself to rugged chain of mountains in southern Montana in what was historically Crow Country). Her horse form features prominently in a new exhibition at Kouri + Corrao Gallery in Santa Fe, New Mexico, titled “HORSE [Di’i’tamah, Issuba, Iichíile].” Halfmoon, ever prescient, uses the horse as a stand-in for Native people when considering blood quantum. Blood quantum is a system of determining who has enough “Indian” blood to be an enrolled member of a given Tribe. This system, which originated in European monarchies, is a lingering specter of historical colonization that has developed into systemic oppression. The two sides of this argument lay diametrically opposed, one being for blood quantum and keeping the enrollment boards closed, the other being against blood quantum, fighting to open the enrollment qualifications to descendants of Native people who have ties to the culture and land surrounding them. 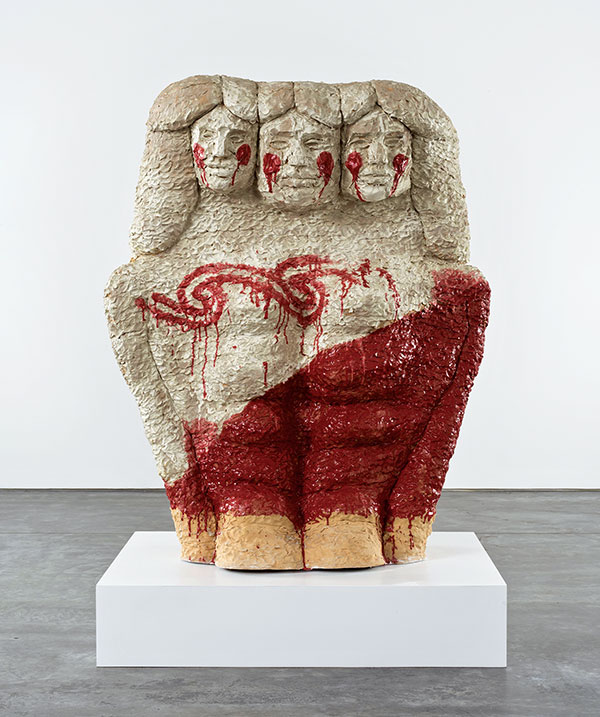 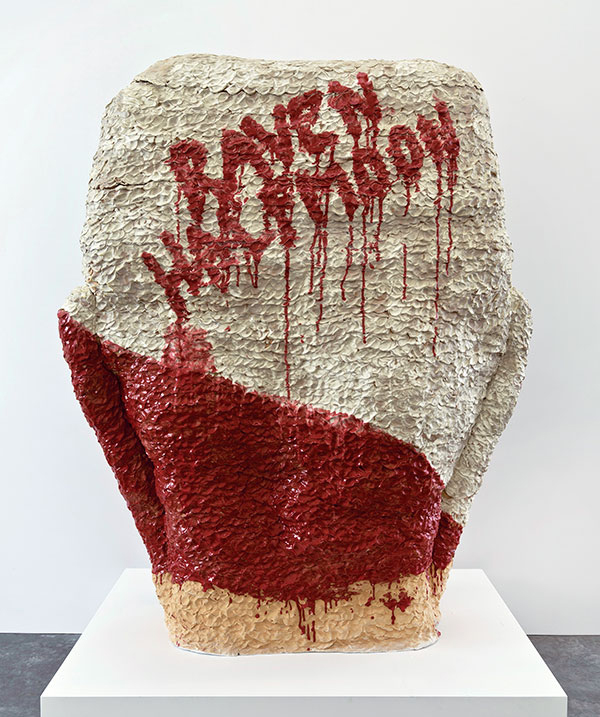