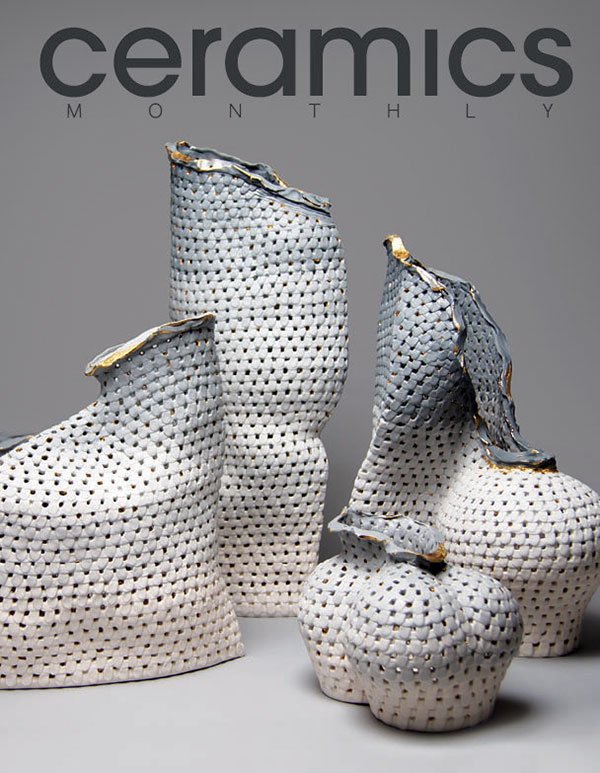 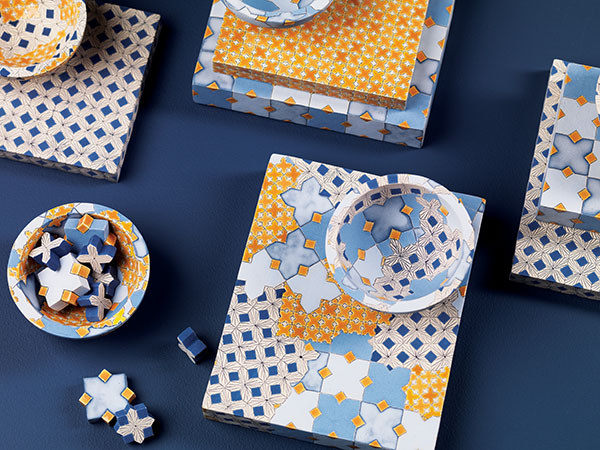 Frances Priest creates beautifully ornamented pieces that intricately and intentionally combine a multitude of elements. She calls her approach the “accumulated gestures of making,” which not only explains the intensely layered nature of her work, but her approach to artistic practice. The outcome is truly unique. The compounding effects of pattern, place, scale, form, and technique allow her to create delightfully complex, playful, and mesmerizing objects that are unmistakably hers.

Frances Priest’s early and deep interest in pattern can be traced back to a book she was a given as a child, The Grammar of Ornament by Owen Jones. Dating back to the Victorian Era, Jones’ book is a beautiful and comprehensive sourcebook for the decorative arts. The book offered a broad array of inspiring motifs, which Priest came to realize were from mostly non-Western cultures that had been under British rule. As Priest evolved as an artist, her purely aesthetic appreciation of pattern evolved into a commitment to understanding the connection between her practice and the origin of the designs her work embraces. Priest’s graduate show and early work (made between 2000–2006) explored the relationship between mark making and form. She cites key influences from makers such as David Roberts and Ken Eastman, both of whom tutored Priest as an undergraduate, but hints of her love of pattern are evident and her commitment to drawing in clay is key to these early works.

Priest’s shift toward working with pattern was sparked by an art residency in Thailand. The ceramic department at Edinburgh College of Art, where she was teaching at the time, faced closure and she availed of the uncertainty to pursue a residency at Regents International School in Thailand. During her residency, she didn’t work with clay, but instead traveled through Thailand and Cambodia, documenting her beautifully ornamented surroundings through drawing and photography, connecting back to her early passion for finding meaning in the decorative.

When she returned to Scotland, she pursued another residency at Cove Park, which gave her time to reflect on her experiences and draw from the accumulated research she had gathered on her travels in Southeast Asia. She began to think about ceramics in relation to place and art as a process. The work that emerged sought to understand how decorative art and objects function within our daily lives. These ideas, which underline the meaning of place, provided a foundation for Priest’s artwork today. 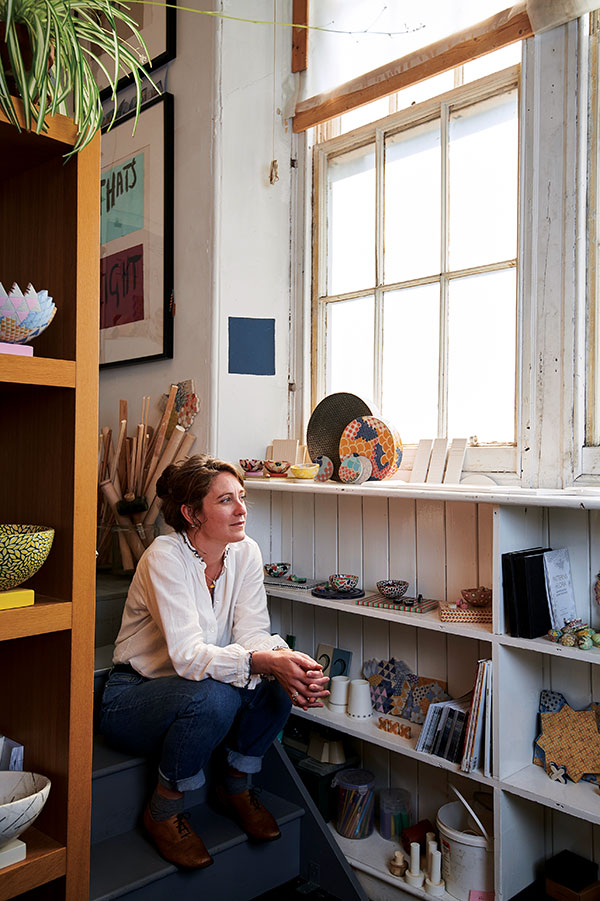 It is easy to see the meaning of place take hold in Priest’s art. Her project Patterns of Flora | Mapping Seven Raasay Habitats, commissioned by Atlas Arts, provides a direct link with nature, transcending the boundaries of a typical pattern book. She uses the island of Raasay in Scotland as her source and created motifs directly from the natural elements that defined the landscape, collaborating with local botanist Stephen Bungard to identify specific habitats and plants. Similarly, the series of gathering bowls she created for online retailer The Garnered employ the colors and textures of life on the beaches of Sanday, one of the Scottish Orkney isles.

Another key element in Priest’s work is scale. The size and scope of her expression range from work that easily fits in the palm of the hand to large architectural projects. She deftly mixes scale in single installations. A clear example is The Tiled Corridor, commissioned by Edinburgh & Lothian Health Foundation for The Royal Edinburgh Hospital. In this work, the viewer is invited to engage at different levels; each tile is hand sized, but the combined effect is a patterning that fills the entire space. Participants can enjoy the individuality of each tile or the impact of the tiles working in concert, allowing engagement with the work in many ways. 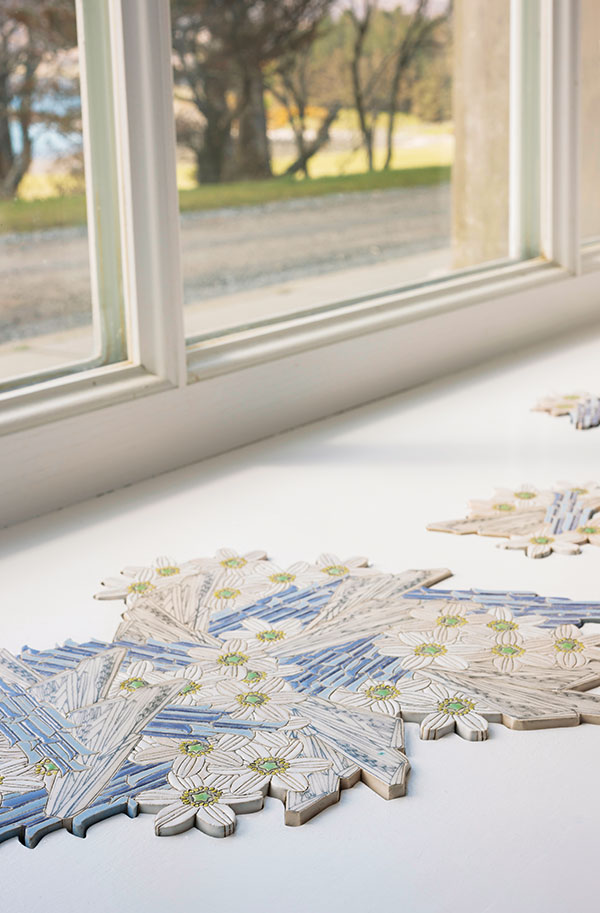 Form and surface play together in harmony in Priest’s work. She is particularly fascinated with how surface clads form. She complements complex motifs with notably stripped-down forms. Priest sees the form as an important canvas for her patterning, allowing the viewer to really isolate the intricacies of the design.

Priest uses her sketches and meticulous drawings as a starting point. These drawings are very precise, but during the process of going from two-dimensions to three, she permits the piece to make some of the decisions. This dialog is even more apparent in her pieces where the edge is defined by the surface design. In these cases, it is very hard to differentiate where one begins and the other ends. This ambiguity creates work that is organic and offers one’s imagination the possibility of continued growth and evolution. 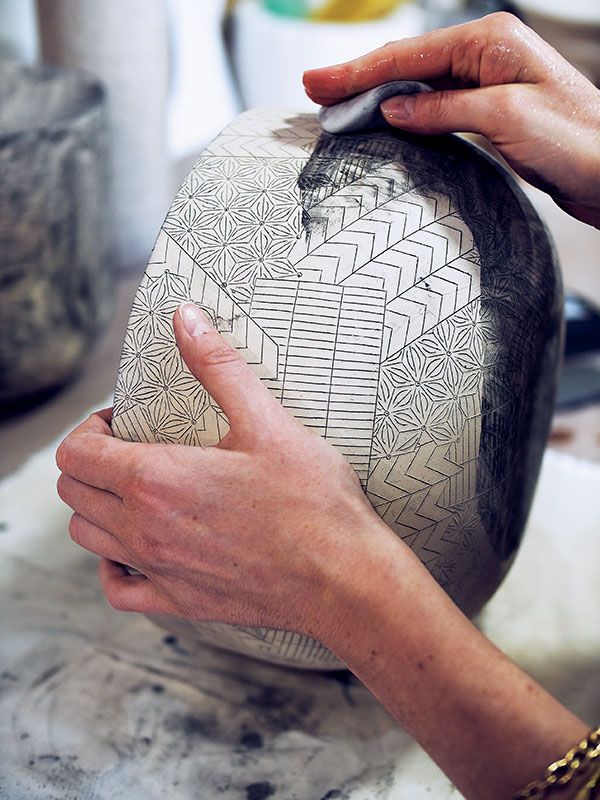 The near-infinite potential for reinterpretation reflects Priest’s playful nature. She says it’s not fair if she’s the only one having fun. She wants the viewer to be able to share her joy in working with clay and, by this emotional link, become part of the making process. Participants in her work are afforded the creative power to rearrange an installation of pieces by imagining how a piece could continue to grow.

Priest employs a combination of handbuilding techniques and plaster molds to create her forms. Once the pieces are leather hard, she inscribes designs using a scalpel or handmade tools she has fashioned out of aluminum tubing. A notable source of inspiration has been a collection of cake-decorating tools she inherited from her mother. The incised designs are left to dry—sometimes for weeks. Then, the pieces are bisque fired and the surface is polished to remove any burrs. An oxide wash is applied to the surface and then wiped away, leaving color in only the cut lines. This technique creates a drawing on the surface of the clay similar to a coloring book, which she meticulously fills in with a mix of glazes and slips. A final step that Priest sometimes uses is to apply custom decals made from her own drawings. 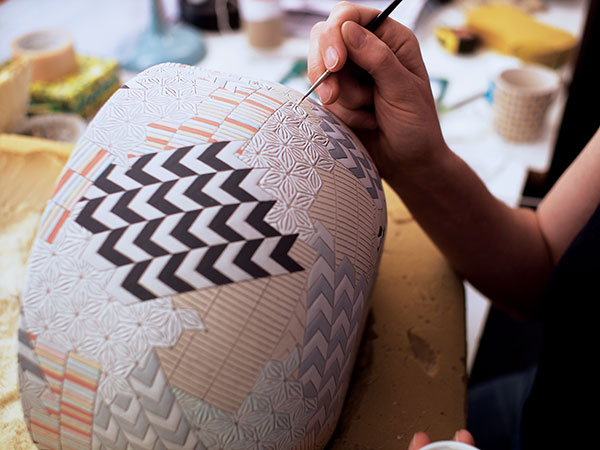 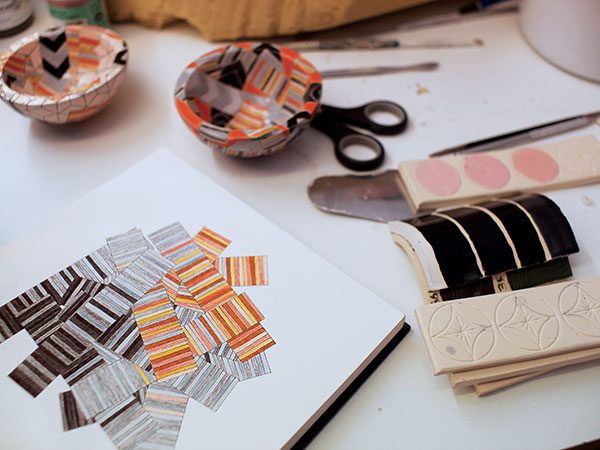 Priest’s current practice is a mixture of design projects, work in the public realm, and her studio practice. Although these are separate avenues of making, the different projects evolve in dialog with each other, and many times one project will influence another.

Priest has built a strong relationship with the Edinburgh Lothian Health Foundation and has completed many projects with them over the years. Notable examples include The Tiled Corridor at The Royal Edinburgh Hospital, Tulips at Western General Hospital Breast Unit, and Kirkcaldy Patterns for the family room of the new Edinburgh Haematology Centre.

Her studio practice is oriented toward galleries; her main representation in the UK is with Cavaliero Finn and she also works with Culture Object in New York. She has created exclusive collections for the curated online shops Objet d’Emotion and The Garnered. When working with galleries, she emphasizes the importance of an artist-centered perspective and has gravitated toward relationships that understand and support the totality of an artist’s career. 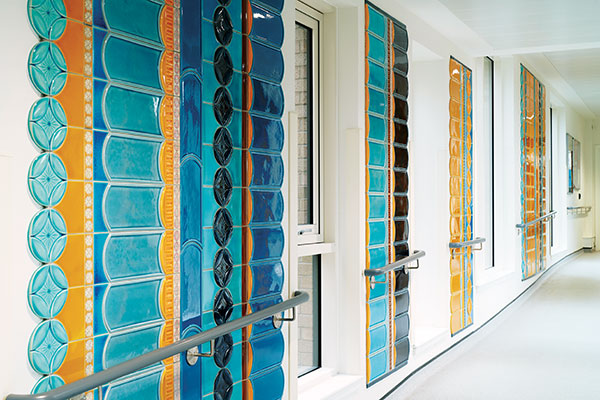 Priest has been awarded a QEST Scholarship (Queen Elizabeth Scholarship Trust), which will provide her with the opportunity to train and undertake research with heritage tile manufacturers Craven Dunnill Jackfield. Priest believes in the value of investing in artists. Both private and public funding have not only allowed her the time and space to explore, but she also firmly believes this input has a broader value for society. “Something like The Tiled Corridor couldn’t really come about had I not had opportunities to research, experiment and had time to play . . . I think money spent on artists is an incredibly good investment, I think artists work really hard and they give back an awful lot.” 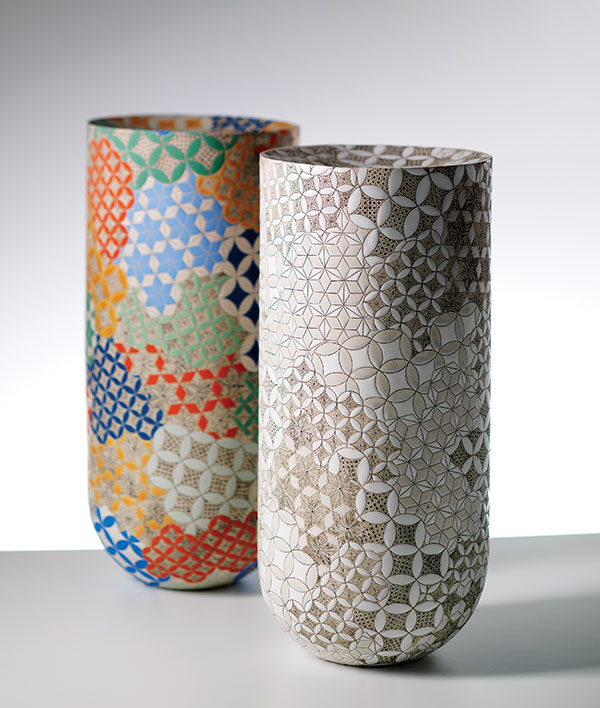 Frances Priest studied ceramics at Edinburgh College of Art and she is a QEST Johnnie Walker Scholar. Her work is in museum collections, including The National Museums of Scotland, Edinburgh; The Fitzwilliam Museum, Cambridge; and The Victoria & Albert Museum, London. She has been a recipient of an Arts & Business Awards Commendation, Creative Scotland Artist Bursary, and Inches Carr Trust Craft Bursary. She lives and work in Edinburgh, Scotland. www.francespriest.co.uk.