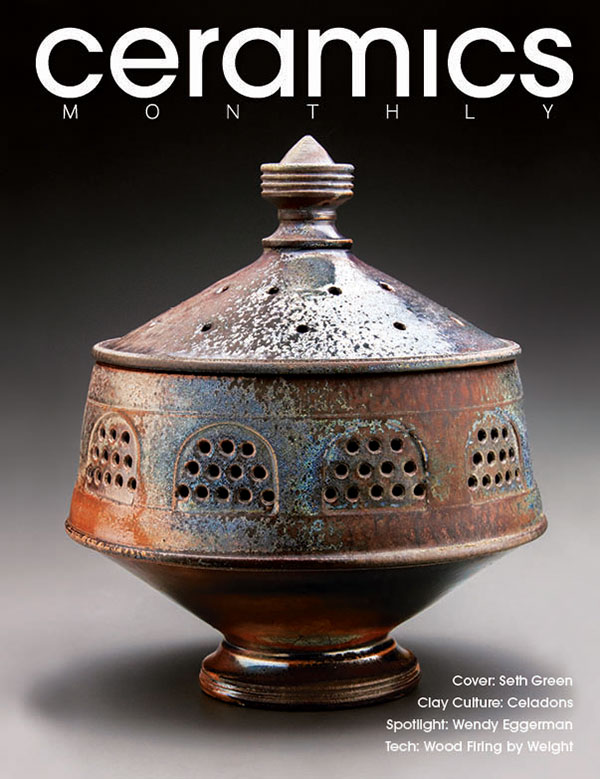 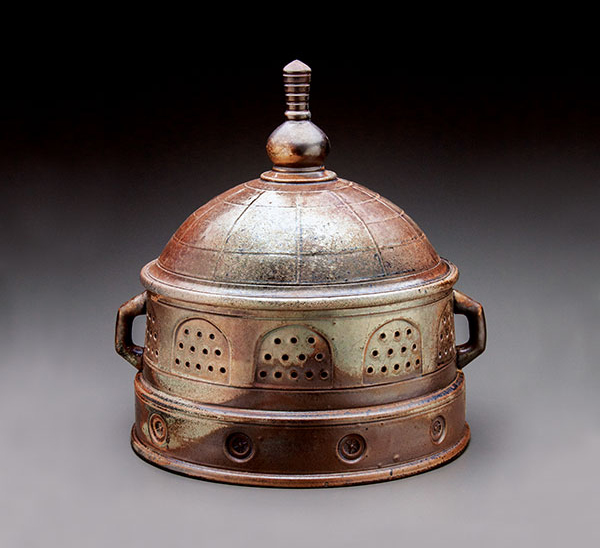 Traveling outside the US has richly influenced my life as an artist and has clarified the use of architectural references that I embed into my ceramic vessels more than anything else. This influence was initially stimulated while I was a graduate student at the University of Nebraska–Lincoln (2006–2009) on a trip to South America with my mentor, Doug Casebeer, former artistic director of ceramics at Anderson Ranch Arts Center, for a kiln-building workshop at the Curaumilla Art Center near Valparaíso, Chile. Up to that point, architecture influenced my pottery, but the extent was limited to the fact that the classical structures I was referencing resembled rudimentary aspects of lidded pottery forms adorned with uncomplicated knobs or finials. 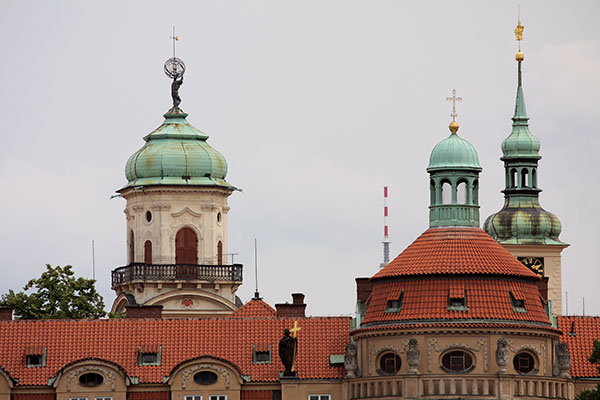 During the workshop in Chile, we constructed a noborigama (multi-chamber) wood kiln. We built the kiln during the day and made pots at night to fill the kiln for the inaugural firing at the end of the workshop. Experiencing a new culture, making new friends, and building and firing pottery in an unfamiliar environment was the inspiration I needed to continue my graduate research. The workshop experience was better than I had anticipated, but the most enlightening part of the trip occurred at the tail end of my journey. While the kiln was cooling, I took a long walk out on the nearby peninsula to an elevated place called La Punta Curaumilla. As I approached this high point from downhill, I beheld the striking silhouette of a lighthouse against a backdrop of the bright blue sky. In that moment, I had an epiphany, and I understood why I was drawn to looking at architecture as a maker. It was the silhouette and the space around architecture that was so captivating. 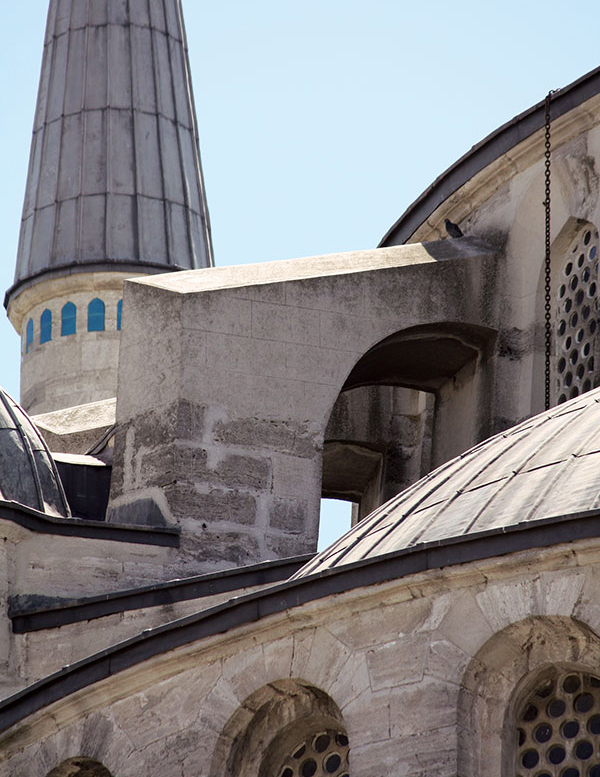 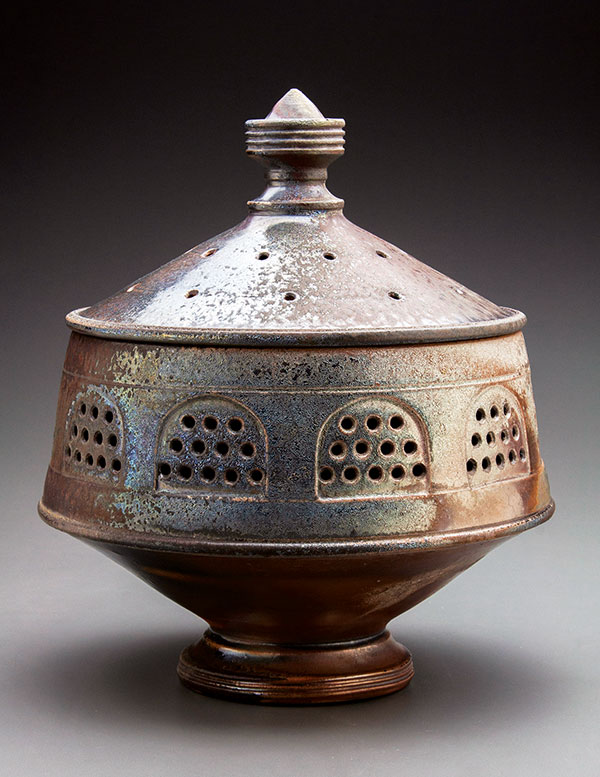 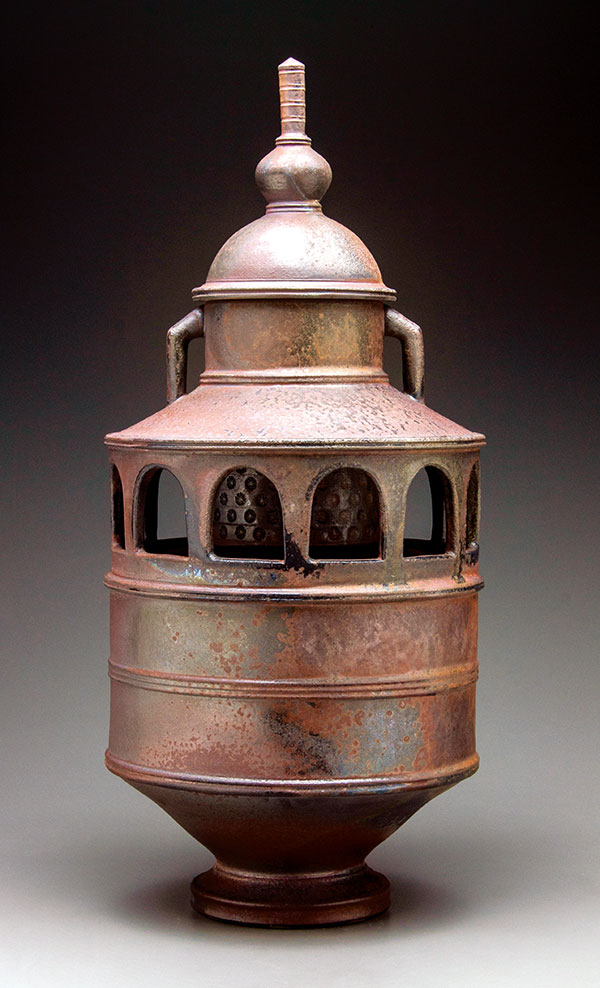 With this new understanding, I returned to Nebraska and began researching architecture with greater clarity. In my exploration, I discovered an old book of black-and-white photographs of architecture in the former Czechoslovakia. Silhouettes of Baroque and Romanesque cathedrals, castles, and towers in Prague, known as the Golden City of a Thousand Spires, captured my attention. This research evolved to include the study of symbolic elements of Middle Eastern mosques. Expansive domes and elaborate finials assimilated with cupolas and windows became go-to references for the forms and ornamentations of my lidded jars, bottles, and pouring vessels. 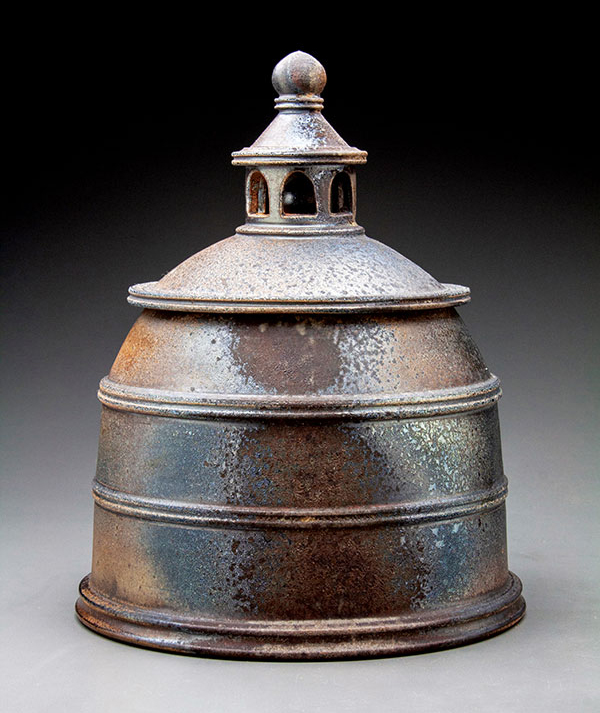 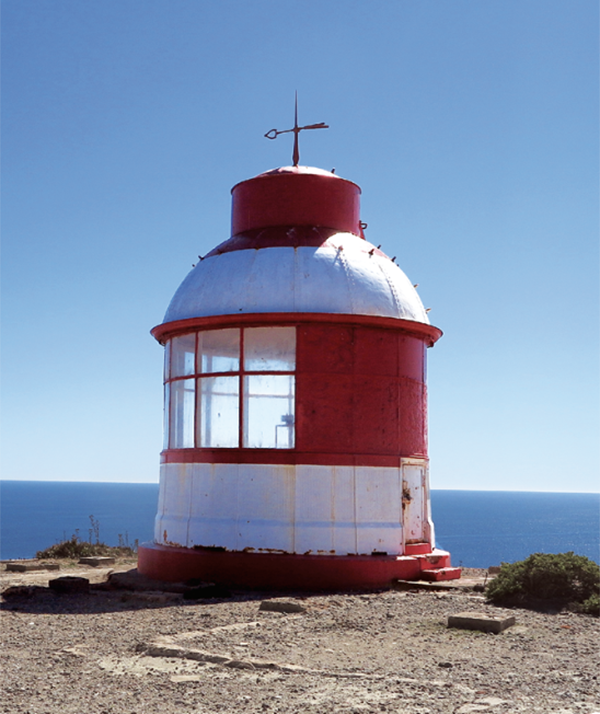 The Opportunity to Investigate

These photographs and other images found online jump-started the body of work that became my MFA thesis exhibition, but this was only the beginning of the effect of their influence. The impact of two-dimensional images was somewhat limiting, so I knew a real-life experience with these magnificent structures was necessary for my artistic progression. In 2014, I was awarded an Individual Artist Fellowship through the Kentucky Arts Council that funded a trip to Prague and Istanbul. In both locations, I climbed every high tower and visited as many cathedrals and mosques as possible to study, sketch, and photograph all of the structures that I had been admiring for years. The opportunity to investigate architectural intricacies such as windows, cupolas, finials, and buttresses up close was revealing, and it changed the way that I study and use these references in my work. I was surprised by the details that caught my attention in-person in comparison to what struck me as I studied two-dimensional images previously. 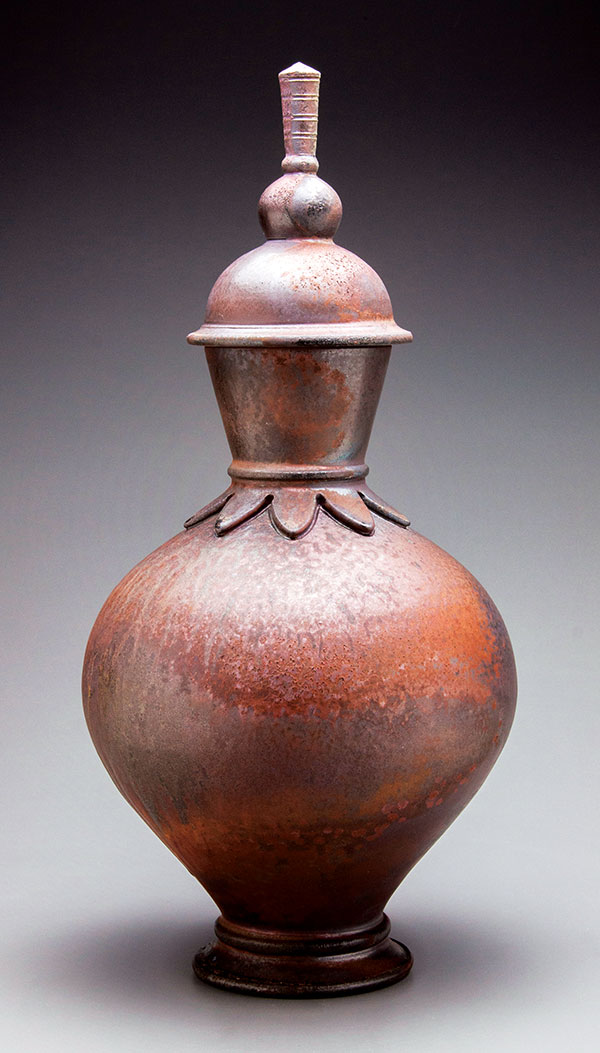 Since this adventure, I have been slowly assimilating this research into my studio practice. Press-molded buttress handles and windows that are pierced, carved, and stamped have emerged as adornment. In some cases, I’m infusing hybridized references from both Prague and Turkey into one piece. For example, the form of my bottles is influenced by cupolas and spires in Prague and the handles that adorn the upper section are derived from buttresses that support the domes of mosques in Istanbul. These ornamental handles have also started to show up on my domical jars, and windows have become more prominent features on many of my domical jars, double-walled vessels, and bottles.

Allowing assimilation to give way to innovation in the studio and embracing the evolution of these influences over the last several years have enabled my work to progress. While some changes have been intentional, others have been reactionary and incremental, resulting from trial and analysis in the studio. Due to the time-consuming nature of this analytical process, I’ve been taking advantage of summer and winter breaks to work on my body of architectural vessels. Most recently, during the summer of 2021, I was able to devote a great deal of time to this research as I completed a Faculty Research Fellowship in place of my normal full-time teaching schedule. 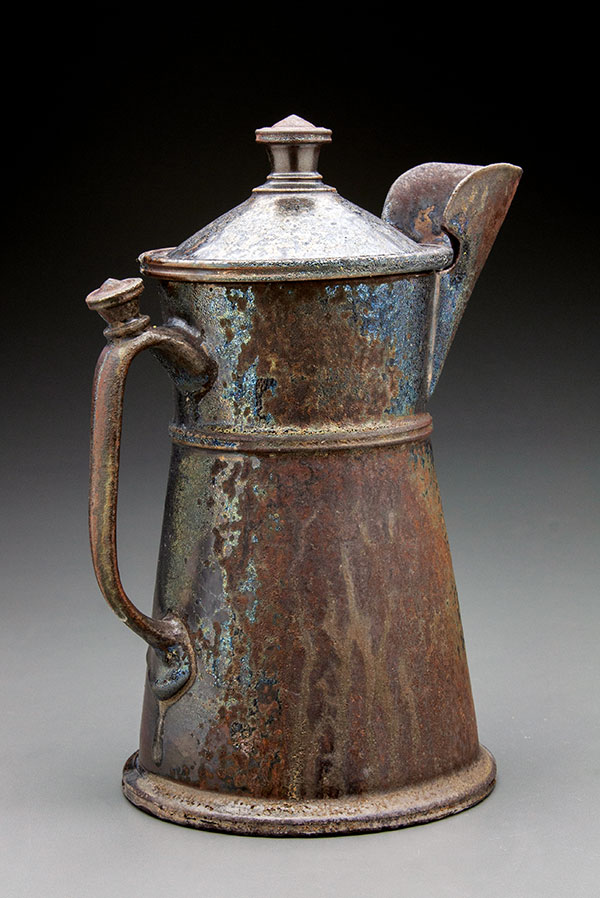 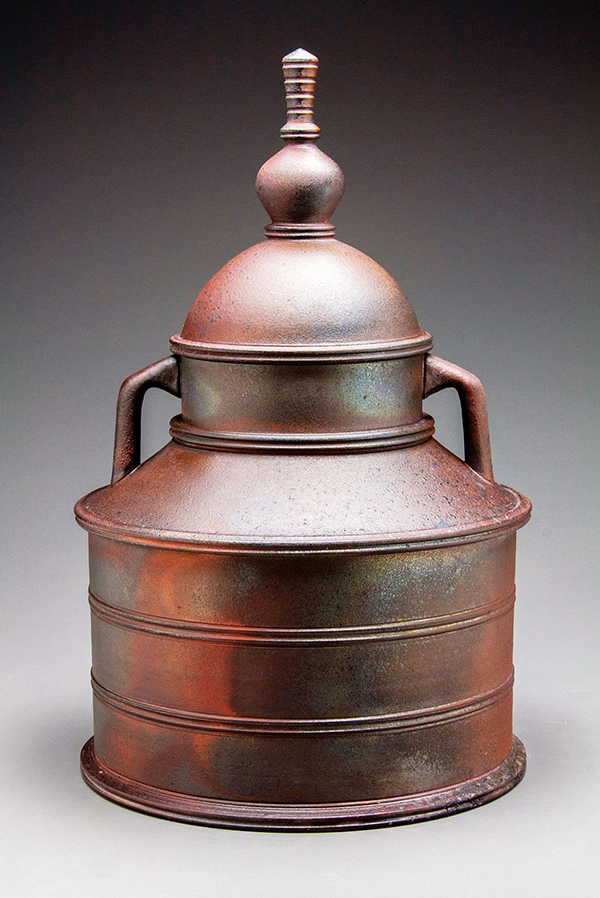 Revisiting the sketches and photographs from my 2014 overseas adventure inspired some new vessels. Analyzing previously attempted pieces and reworking old ideas also brought past unsuccessful efforts into fruition. Subsequently, I applied high-iron slips to these pieces, which were then wood fired in my train kiln and cooled in reduction. This firing atmosphere lends metallic and tarnished finishes. The surfaces are reminiscent of luxury or ceremonial metalwork crafted during the Persian and Ottoman Empires and used in palaces to celebrate momentous occasions or in places of worship to enhance the sacredness of a ceremony. 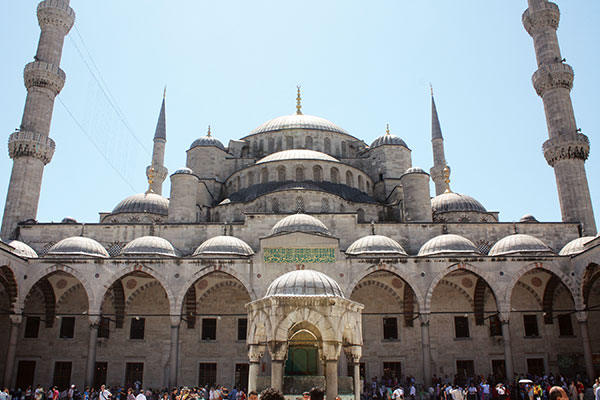 Traveling to South America was certainly the catalyst that initially impacted my understanding of the influence of architecture on my ceramic vessels. However, after finding and studying images of the buildings that inspired me, going to the sources in Europe and Asia to experience these edifices for myself is the reason for the perpetual influence. Doug Casebeer’s words often ring in my ears when I think about travel and growth. He advised, “Travel is crucial for artistic growth. Whether you experience a foreign country or work out ideas in your sketchbook, it is vital creative content for developing intentionality in artwork. Taking risks and challenging personal value systems results in artistic growth.” Perhaps the most significant point of this story is my personal evolution as an artist through the stages of imitating architecture, assimilating its characteristics, and ultimately incorporating innovative ideas into my ceramic vessels. These experiences, years of hard work, analysis, and persistence have led to greater perspective and success in the studio.

the author Seth Green is an associate professor of ceramics at Purdue University Fort Wayne (PFW) in Indiana. He received an MFA in ceramics from the University of Nebraska-Lincoln and a BA in art from Southern Utah University. He has worked at Anderson Ranch Arts Center in Snowmass Village, Colorado, and has been an artist in residence at the Archie Bray Foundation in Helena, Montana. Before joining the faculty at PFW, Green taught ceramics at Morehead State University in Morehead, Kentucky. His work is represented by the Clay Studio of Philadelphia and Companion Gallery in Humboldt, Tennessee. To learn more about his work, visit www.sethgreenpottery.com.