Appears in the June/July/August 2022 issue of Ceramics Monthly. 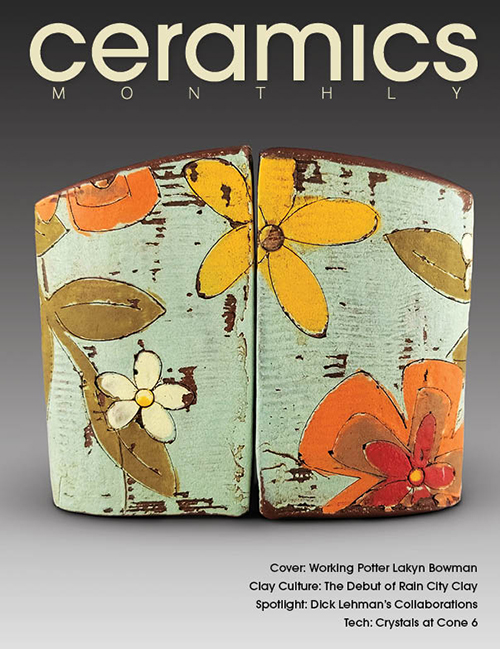 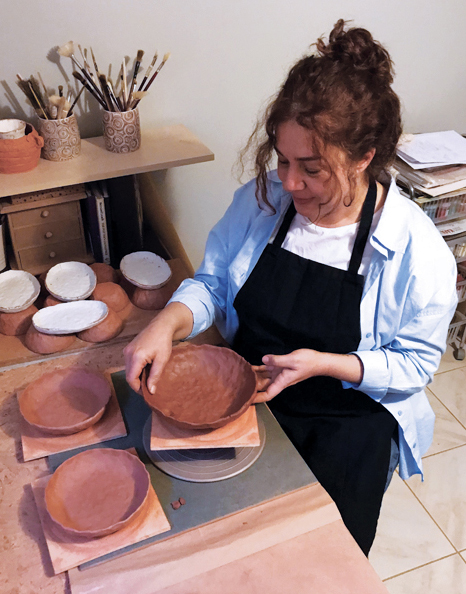 Didem Firat is an instinctual potter who makes joyfully decorated work that plays with your senses. Her elemental forms and simple, painted designs combine to create an unexpected complexity that keeps you engaged and makes you want to puzzle through the different elements. The earthenware clay gives a sense of weight to her work that is actually not there. On the contrary, her pieces are pinched incredibly thin and are unexpectedly light to hold. And, although she works the clay a lot to achieve her final vessels, they embrace the loose and organic nature of raw clay. Firat shares that when people drink out of her mugs, they can’t stop themselves from cradling the form and exploring the painted designs.

Firat is humble about her work, but I believe the strength of her art comes from the fact that she began her career as a potter at a later stage in her life. Although she works intuitively, without a plan, her previous life experiences offer a unique foundation from which to draw. She explains, “My pottery journey started at the age of 45. Four years ago, I heard about a course in ceramics at the public education center, which is very close to where I live. The first lesson was ram’s head wedging and pinching techniques. At the end of the day, I was feeling as if I had discovered something mysterious and something that must be in my life. It was the material, the clay, that fascinated me.” She continued the course for a couple of months, but left after she felt out of alignment with her instructor, who constantly urged her toward perfect geometry in her work. She began making ceramics at home while also taking throwing classes at a traditional pottery run by three brothers on the outskirts of Ankara, the capital of Turkey. Within a year, she had set up a full ceramics studio in her home. She says that she sometimes wishes that she had begun clay earlier in life, but also realizes that if she had, she would not be making the work that she does today. 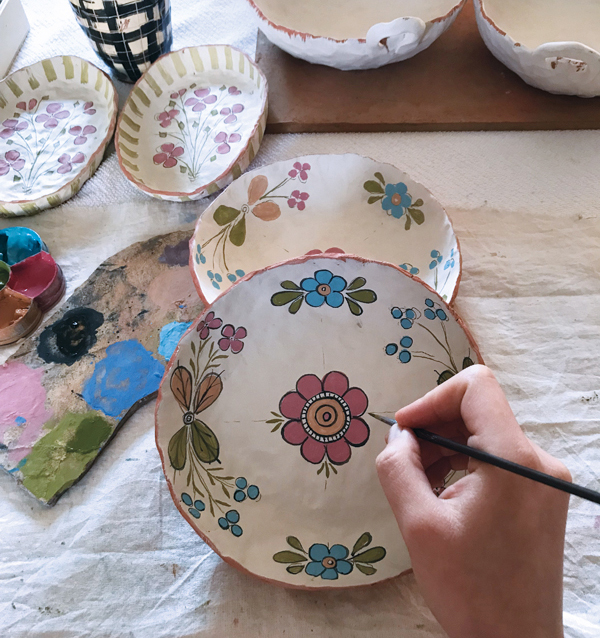 Before discovering clay, Didem Firat worked as a technical translator, which is a profession that requires an enormous amount of precision. The pressure to always be perfect was a big source of stress, and her discovery of clay led to a monumental shift in her thinking. While her profession had led her to pursue a rigid idea of perfection, in clay she could be playful, spontaneous, and imperfect. In fact, the looseness of clay became a guiding force in her work. Anytime she was unsure about the direction she was pursuing, she would see if it aligned with the organic qualities of clay. She says, “At the beginning, during the ceramic course, I was trying to build symmetric and perfectly shaped objects. Soon after, I discovered that trying to make perfect forms was unsettling me, although I was making them with a material which I found otherwise relaxing. I was forcing the clay to be perfect . . . this situation was very incompatible with the nature of the material. Then I shaped the clay without any concern about perfection and, for me, the outcome was magnificent.” Firat believes that in a world obsessed with technology and perfection, we need to allow room for the simple and the imperfect. For her, these two ideals lead to freedom and a whole new way of appreciating life. 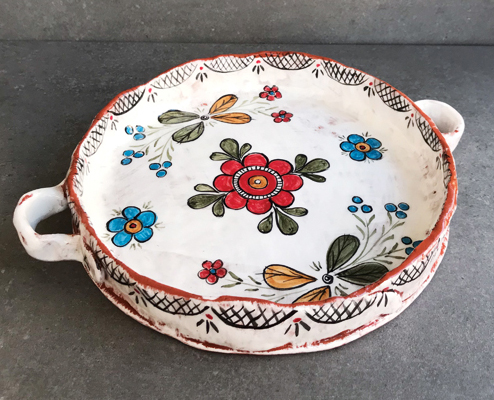 Firat is inspired by old masters and clay itself. She admires ancient pottery and Japanese ceramic art, the brushwork of Shoji Hamada, the ceramics of Akira Satake, and the enthusiasm of Füreya Koral, a pioneering and renowned modern female ceramic artist in Turkey. Didem describes clay as a living material that is simple and complex at the same time, like life itself. She says, “Clay presents you an eternal adventure with endless amounts of outcomes, and in return, it only wants your commitment. Clay is wise, it teaches [you] to be patient, to slow down, and not to give up.”

Firat’s studio is located in Ankara, which is situated in the exact center of Anatolia. This region of the world has been home to many civilizations and has a long history of ceramics; these vessels, sculptures, and tiles have been a source of influence for her. She explains, “Earth and fire met in Anatolia, at Çatalhöyük around 6000 BCE, which is 4000 years before they did in the Mayan civilization and 1000 years before they did in prehistoric Egypt. In regard to surface design, the roots of Turkish ceramic tiles date all the way back to the 8th and 9th centuries. So, when I go to any museum in Turkey, I have the chance to see the pottery of Trojan, Lydian, Hittite, Urartian, Byzantine, Seljuk, and Ottoman civilizations. I think this is a gift for a ceramic artist and it is impossible not to be influenced.” 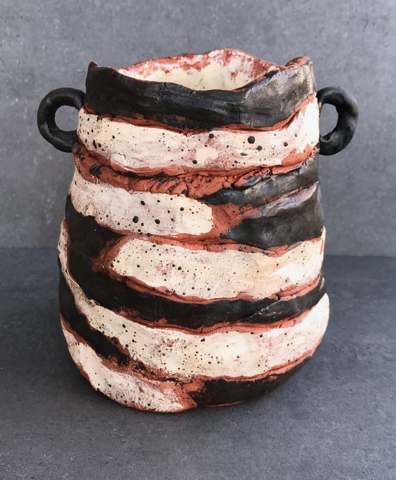 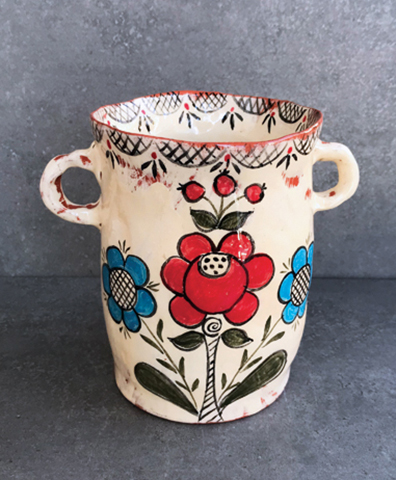 A normal day for Firat starts with a cup of coffee. If she is still in the studio at the end of her morning coffee, this means that day will be a clay day and she will create. Her process is very meditative and time consuming. She uses a red earthenware clay. First, she shapes the clay by pinching and coiling it into a variety of forms (plates, bowls, mugs, teacups and saucers, vases, and platters, to name a few). Once the pots are ready and dry, she bisque fires them to 1904°F (1040°C). Then, she decorates her pieces with engobes (slips) and underglazes. Her designs are loosely inspired by traditional motifs, but she rarely knows what she will paint onto the surface until she actually begins painting. Finally, she applies a clear glaze and fires her work to 1940°F (1060°C). From handbuilding forms to opening the kiln, she finds the entire process very exciting. She feels there is always more to explore and try and believes that as long as she can preserve this feeling of enthusiasm, she will continue to create. 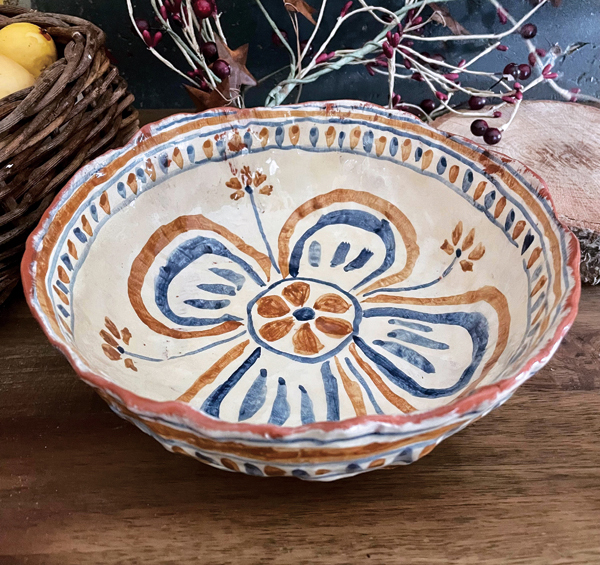 Firat enjoys having her studio in the basement of her house, as it gives her the chance to work at any time. Rather than working continuously, she enjoys spending time alone in the studio, although her daughter does help her load and unload the kiln. Firat believes that making pottery is hard work, and that it needs to be done in a state of tranquility. However, if she has a looming deadline, she makes a schedule and tries to work accordingly. Firat carefully sets aside enough time for the making, decorating, and firing, because she knows that if she works in a hurry and under stress, the pieces will not come out as she intended. There is a flow to Firat’s creative process. As she gets toward the end, she begins to picture her work outside of her studio and in the hands and homes of her collectors. 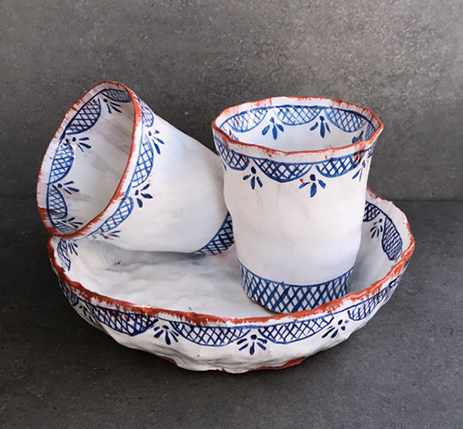 Firat’s work differs starkly from industrially produced ceramics. Her pieces celebrate the many marks left by the maker’s hand. Instead of concentrating on uniformity, she intentionally focuses on the differences between each piece. She says that “in contrast to industrial ceramics, which are identical and accepted as perfect, I think it is the handmade objects that reflect the real perfection. The uniqueness comes from the impossibility of ever creating another piece exactly like it. You can find something from the maker in that object, so handmade objects are more personal. A handmade work has the ability to build a silent but cheerful dialog between the maker and the collector.” 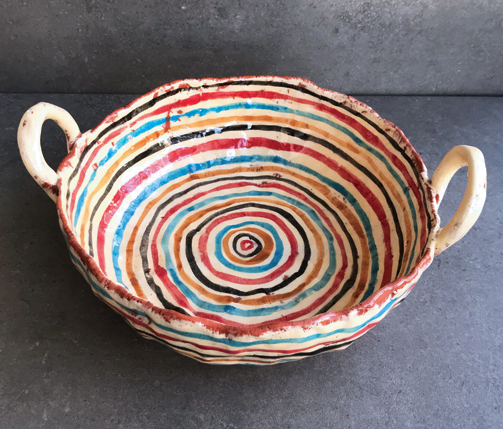 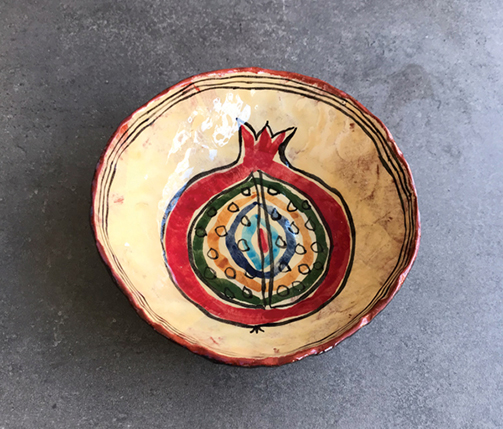 Firat doesn’t keep track of the number of pieces that she makes, but she has been very busy for the past two years. She markets her work by posting images on Instagram and has an online shop through Etsy. She also works with several concept stores in Spain, Switzerland, the UK, and the US. To learn more about her work, follow her on Instagram: @didemfiratceramics.

the author Yasha Butler is a ceramic artist and designer. She has a studio in County Wexford, Ireland, and in Istanbul, Turkey. To see her work, visit www.yashabutler.com or follow her on Instagram @yashabutler.