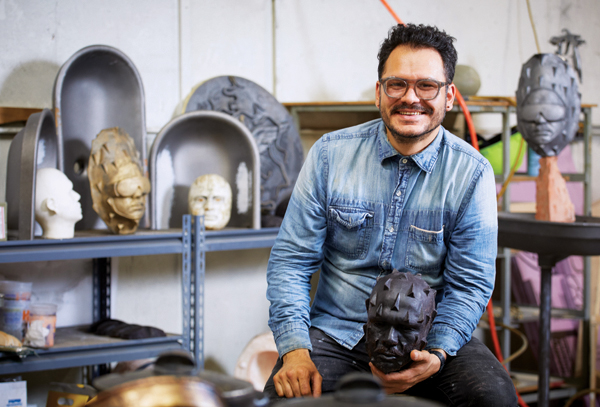 For Mexican-born ceramic sculptor Salvador Jiménez-Flores, being where one is, whether in his past or present, has continually influenced him as an artist and person. Living with a foot in the two cultures of Mexico and the US, Jiménez-Flores continues his search for identity through art by using clay, metal, printmaking, and other mixed media to further define his thoughts toward life and a sense of place. As he states, “The challenge of being bicultural and bilingual is that I live in two different worlds. Everywhere I live, I am a foreigner.” And to paraphrase the renowned author Gloria E. Anzaldúa,1 who once wrote that those living as a “Nepantlera,”2 or “in the middle,” are people existing on the edge who move within multiple worlds and refuse to identify with one particular group or belief structure.

Salvador Jiménez-Flores, born and raised in Jalisco, Mexico, was educated in both the US and Italy, and has been a member of the faculty at the School of the Art Institute of Chicago (SAIC) in Illinois since 2018. He has received numerous scholarships, grants, and awards, including the prestigious United States Artist Fellow Award in 2021, with each recognizing and supporting his work as an artist, educator, and community activist. Working as an interdisciplinary artist, his pieces examine the politics of identity, the state of double consciousness (e.g., being aware of both yourself and how you are viewed by the dominant culture), “the other” (a concept that describes how immigrants or minorities are positioned as inferior to dominant culture because they are seen as different), and futurism by producing a mixture of socially mindful installations, as well as public and studio-based art. Exploring topics of colonization and migration, Jiménez-Flores hopes his art can function as a window into the lives of marginalized people seeking a new path forward in a foreign land. 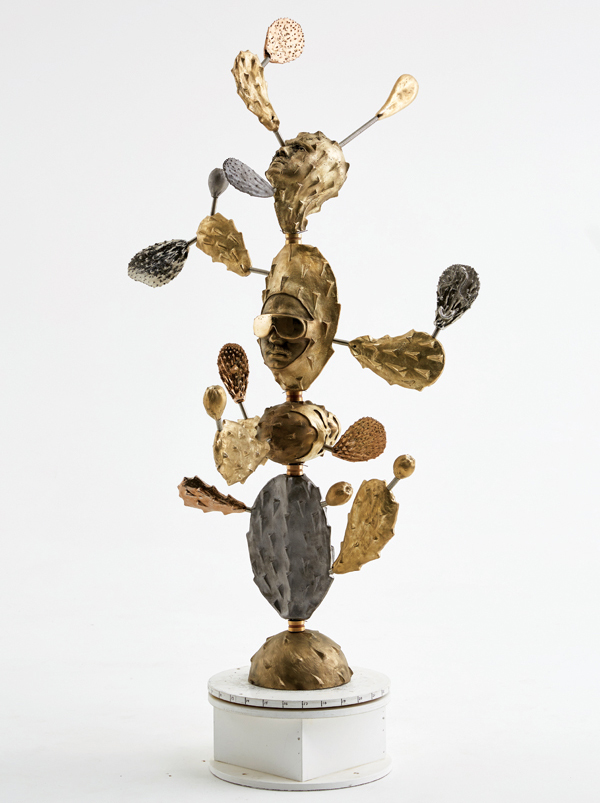 For Jiménez-Flores, art is a tool for both showing respect for his own history while also serving to help him navigate the terrain of his new culture. Working primarily in an earthenware clay with low-temperature stains and glazes, he acknowledges being inspired by terra-cotta Pre-Columbian and Mexican folk art that allow him to reflect the direct connection to his ancestors and cultural history. Using the different colors achieved with red clay fired at various temperatures, each offering assorted shades of browns, oranges, and reds, helps serve to reference the color of both his skin and his people. Furthermore, by exploring the idea of mestizaje, which is the practice of fusing aspects of being both interracial and intercultural, his use of different temperatures, glazes, and clays reflects his own mestizo background and all the personal and aesthetic influences he has experienced living in two disparate countries. Through this work, he creates complex forms that help him understand and explain the angst of trying to “fit in,” something common among members of the Latinx communities in the United States. Facing the realities of chaos at the US/Mexican border, Jiménez-Flores reacts using his art to help others understand the plight of refugees and the struggles that immigrant families face each day. His story is shared with many who do not have a voice to express themselves clearly, making his own artwork an important visual language that speaks for others. And with the influence of the Mexican Muralism3 project of the 1920s, along with the Taller de Grafica4 in the 1930s, both serving as inspiration for how one might combine art and politics to bring people together and affect both social and political change, Jiménez-Flores continues producing artworks in this tradition as a way of using his own production to forge a path forward in a multiethnic society. 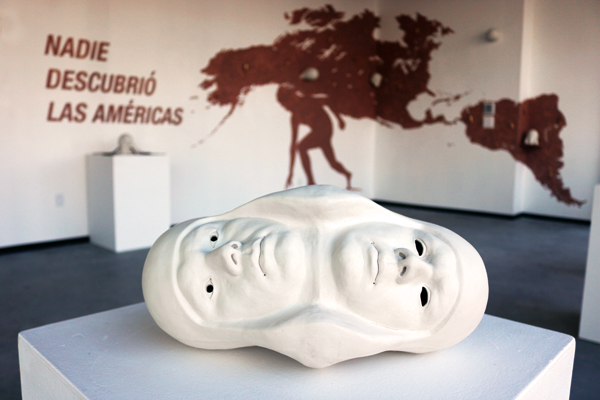 The artwork Salvador Jiménez-Flores creates, often using a variety of historic references, techniques, and materials, reflects a sense of rascuache,5 a common term referring to a Chicano sensibility. Rascuache, or rasquachismo, which means making do with what is available,5 or the equivalent reference to “making a silk purse out of the sow’s ear,” is something he reflects on when describing his own art. As he explains, “The way I think of rasquachismo in my art practice is the same way I combine design, craft, high art, low art, and more.” With an eclectic approach to art making, together with an influence from his Mexican culture, Jiménez-Flores’ art serves as a personal record of an immigrant’s life and dreams. Through time, he has worked to develop a rascuache-futuristic art style for an imaginary world where he can better express pre-Columbian, colonial, and post-colonial histories and aesthetics in his clay work. Pieces like the totemic Nopales Hibridos: An Imaginary World of Rascuache, take advantage of disparate parts coming together through stacked forms, colors, textures, and contemporary and historic references, each contributing to an overall look into identity and migration. 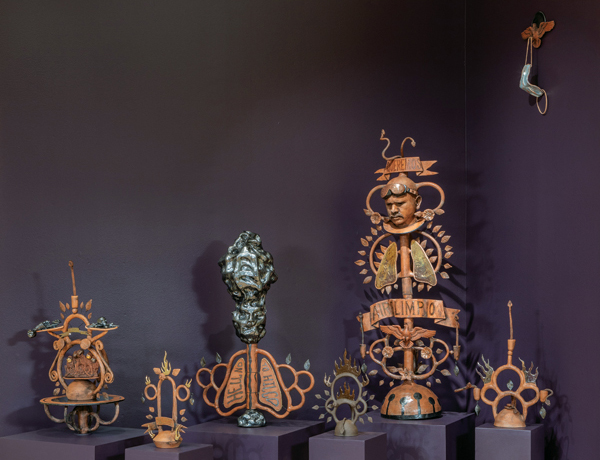 Another sculpture in the same series, La Resistancia de los Nopales Hibridos (The Resistance of the Hybrid Cacti), Jiménez-Flores again combines dissimilar elements from the religious world, Mexican culture, and art to encompass issues of colonization, migration (voluntary or involuntary), history, and cultural appropriation. Additionally, referencing the cactus, which he knows to be a resilient plant that survives the harshest of conditions, symbolizes strength and hope for people seeking a better future in a new land. Along with essentials from the Funk Art movement and references to images of both Aztec beliefs and Catholic traditions, the La Resistancia de los Nopales Hibridos explores a personal identity of both time and place. With this irreverent, Funk Art–inspired self-portrait with his tongue sticking out combined with a portrait of Huitzilopochtli, the Aztec god of sun, war, and sacrifice,6 Jiménez-Flores has masterfully created a work that enshrines his respect for people of color everywhere using both humor and his own cultural history. Similarly, a Brown Power fist supporting the overall structure serves to represent the resistance needed for those in the minority to continue fighting for their individual rights and freedoms. 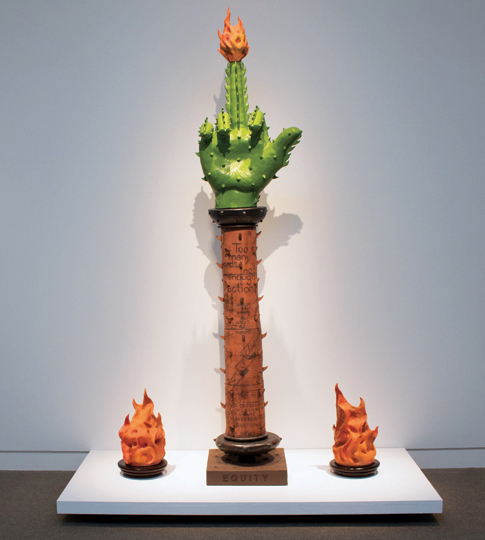 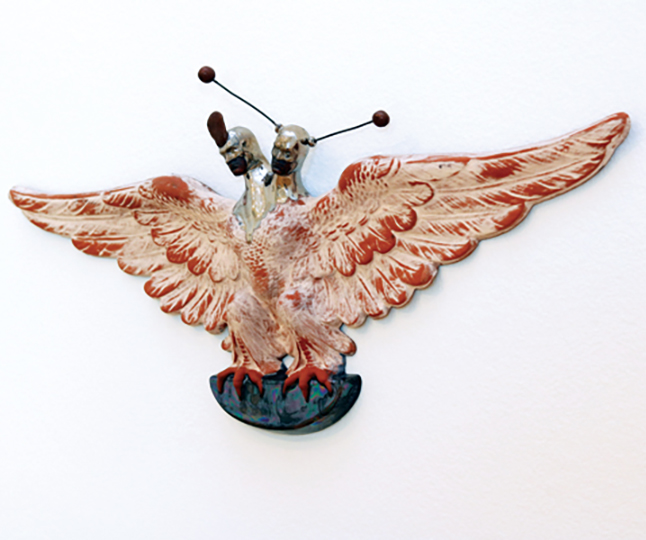 Other works, such as a piece from 2020 titled El árbol del medio ambiente en la Villita (The environmental tree of Little Village), Jiménez-Flores has created a work with a connection to his community, his neighbors, and the environment, stating, “I wanted to make visible the unseen injustices that have happened in the Little Village neighborhood and its residents through decades of institutionalized and systemic racism.” His goal to highlight these injustices seen in the surrounding area of the Pilsen neighborhood of Chicago, including issues of poor air quality and the physical neglect from the city that contributes to the ongoing respiratory problems for Black, Indigenous, and Latinx residents, motivates him to continually pursue art that speaks of the human condition. 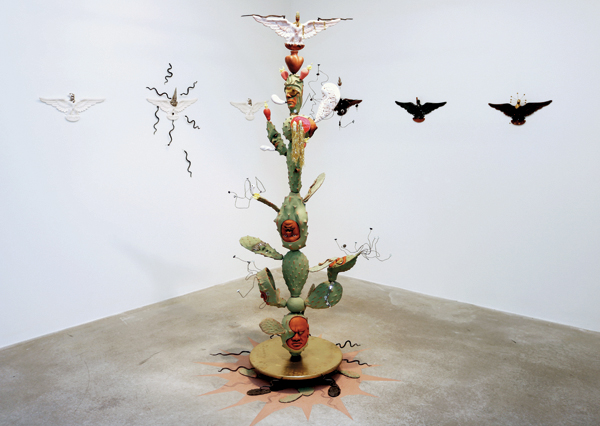 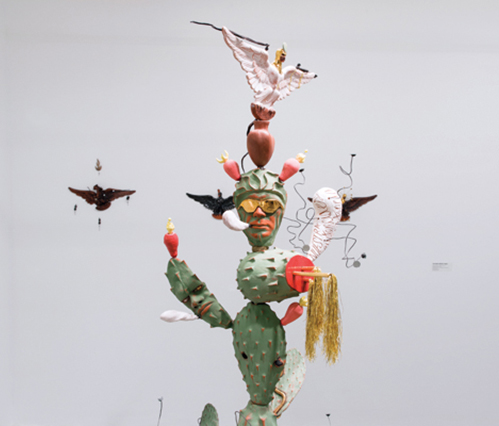 While addressing the topic of individual rights and identity, Salvador Jiménez-Flores strongly believes people of color have been underrepresented and marginalized for far too long. Using his art to shine a light on the issues surrounding minority concerns remains a central theme for him both professionally and personally. As an educator at SAIC, as well as throughout his entire career, Jiménez-Flores has worked to serve as a leader and role model for younger artists of color seeking their place in the larger art world. For him, diversity is about respecting, acknowledging, and finding beauty and empathy in our differences, struggles, abilities, and privilege. As a result of these issues and his own personal concerns, Jiménez-Flores has been a front runner in working collaboratively with other artists to reestablish The Color Network,7 launched in December 2018 with a mission of aiding in the advancement for people of color. While the original Color Network (1991–2008) paved the way for this later incarnation of the group, this new version of the network, one with a broader range of inclusion, was proud to carry on the name of its origins with the blessing of its creators. 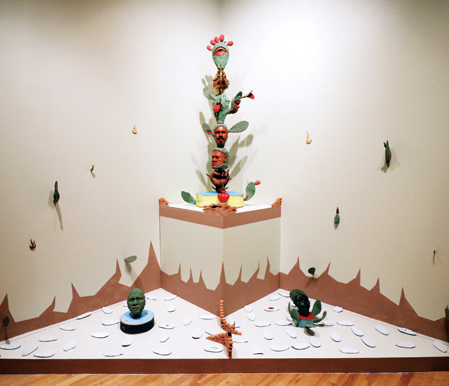 For Jiménez-Flores, it is personal, as he easily identifies the obstacles he encountered upon his arrival in the US, with the first being a lack of financial stability, cultural understanding, and English-language skills; and the second being a lack of knowledge about the educational system as a first-generation college student. Through the recollection of his early beginnings in a new land, Jiménez-Flores uses these memories to create poignant art while equally encouraging and promoting young immigrant artists hoping to forge a new path forward. As he reflects on his long journey from Mexico to the US, the words of the distinguished Latin American scholar Dr. Tomás Ybarra-Frausto hold significant meaning when he speaks of the Chicano way by asking the questions, “Who am I, where am I going, and where do I come from?” Through both his art and his teaching, Salvador Jiménez-Flores continues to seek his own answers to those questions while living a life between here and there.

1 Gloria Evangelina Anzaldúa (1942–2004) was an American scholar of Chicana cultural theory, feminist theory, and queer theory. Author of Borderlands/La Frontera: The New Mestiza, a book based on her life growing up on the Mexico–Texas border, which incorporated her lifelong experiences of social and cultural marginalization into her work. She also developed theories about the marginal, in-between, and mixed cultures that develop along borders, including the concepts of Nepantla.

2 Nepantla, or Nepantlera, is a Nahuatl word (from a language spoken by most inhabitants of central Mexico at the time of the Spanish conquest) that means “in the middle.”

3 Mexican Muralism refers to an art project funded by the Mexican government in the 1930s to allow artists to promote political ideas regarding the social revolution that had just recently ended so that viewers may reflect on how pivotal the revolution was in Mexican history.

4 The most influential and progressive printmaking collective of its time, the Mexican Taller de Gráfica Popular (the Popular Graphic Art Workshop or TGP) created some of the most memorable images in mid-century printmaking. Founded in 1937, the TGP emerged and evolved during antifascist and leftist politics in Mexico in the period surrounding World War II.

5 Rascuache, or Rasquachismo is a theory developed by scholar Tomás Ybarra-Frausto, a former professor at Stanford University in the department of Spanish and Portuguese, to describe an underdog perspective in working-class Chicano communities using elements of “hybridization, juxtaposition, and integration” as a means of empowerment and resistance.

6 In Aztec mythology, Huitzilopochtli is the deity of war, sun, human sacrifice, and the patron of the city of Tenochtitlan. He was also the tribal god of the Mexicas (Nahuatl-speaking Indigenous people), also known as the Aztecs.

7 More information on the The Color Network can be found at www.thecolornetwork.org. The current version, created through group discussions at the 2018 NCECA conference, continues the tradition of the original Color Network by initiating a mission to aid in the advancement of all people of color in the ceramic arts, and by highlighting opportunities in the field and provide an artist database for teachers and curators to reference, helping them integrate a more diverse roster into their programming.