Appears in the December 2016 issue of Ceramics Monthly. 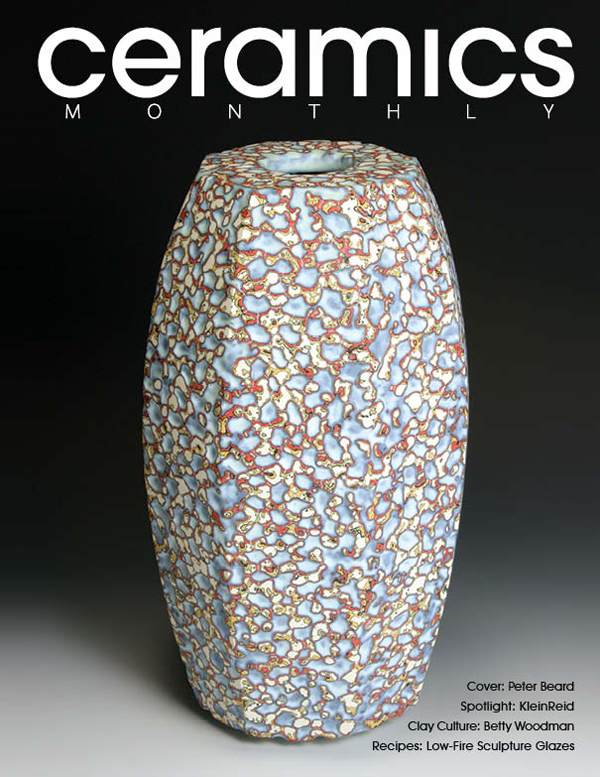 There is a constant striving by ceramic artists to improve the workability, color, and stability of porcelain clay bodies while also creating bodies that vitrify at cone 6. Few porcelains have exactly the right characteristics, but here are a few tips to get you a little closer.

To develop a porcelain clay body that will vitrify at a lower temperature (cone 6 versus cone 10), it is helpful to go back in history to reexamine the origin of porcelain to find out what makes it true porcelain.

It took the Western world 2000 years to figure out how porcelain was made, because the Chinese succeeded in keeping their high-firing methods and materials a secret. Their porcelain was made from kaolin and petuntse, in essence exactly what porcelain is made of today, with the only difference that nature provided the perfect balanced materials to the Chinese potters. Fired at 2372°F (1300°C), it had the ability to become very hard and durable, white, and translucent.

When Europeans were first exposed to porcelain in the early 12th century, it was simply the magic of the white and translucent objects that fascinated them. It was so different from the red majolica pottery that was available in Europe. At first there was just a curiosity about these objects, but when it became clear that only the very rich and most influential part of the population could afford this “white gold,” greed seeped in and everybody wanted it.

The story of European porcelain started in the early 1700s when a young alchemist, Johann Böttger, held in captivity by the King of Saxony, made the first porcelain-like material from alabaster, a translucent and soft limestone, to which he added flux. The first porcelain was mixed a few years later and although not perfect, the mixture of silica, kaolin, and flux vitrified at a very high temperature and set the foundation of the recipes we use today. 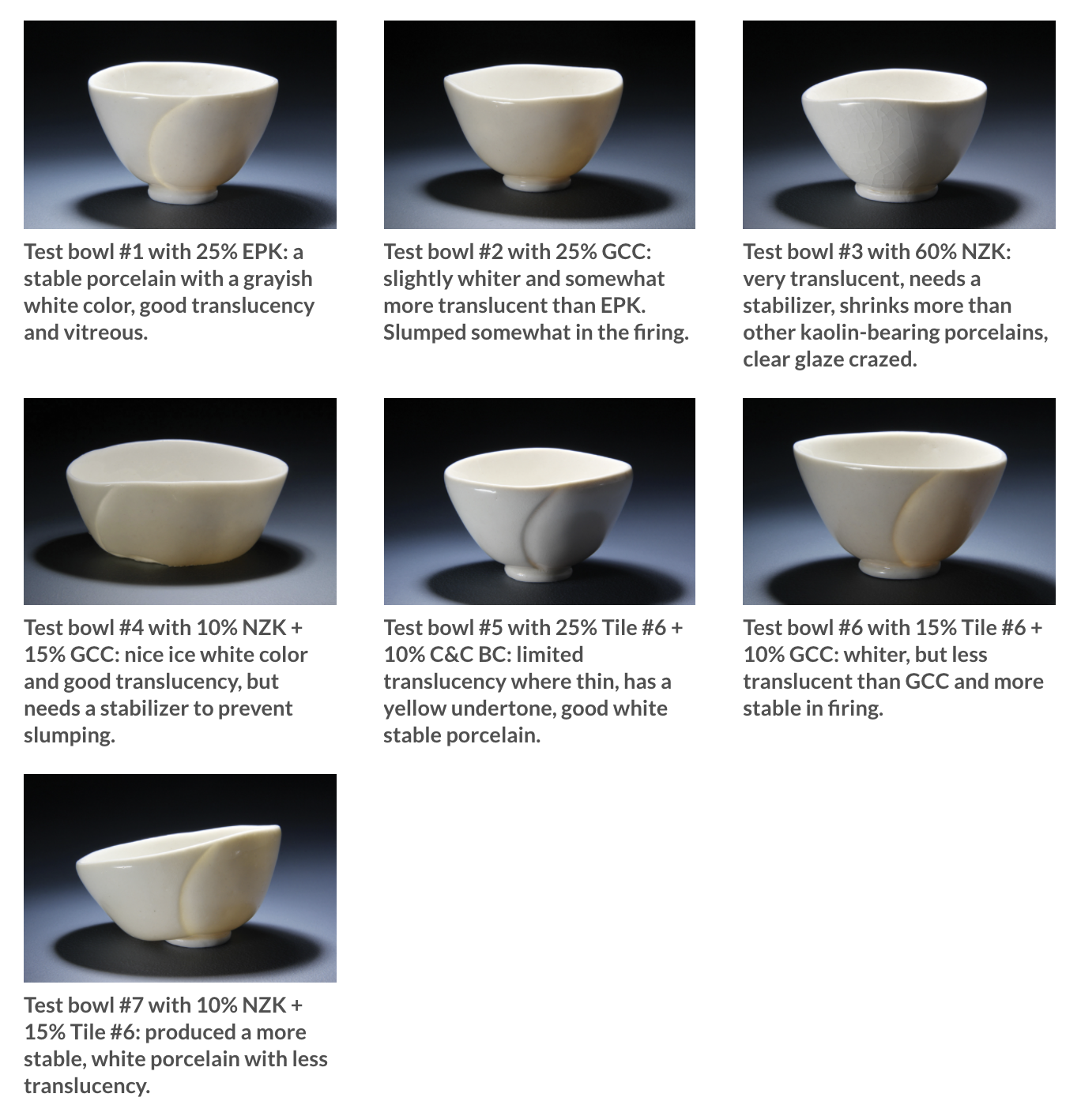 My Approach to Testing Porcelain

In my recent testing of porcelain clay recipes, I wanted to stay as close as possible to the ingredients used in traditional porcelains. My intent was to lower the temperature at which it fires, without sacrificing the properties of vitrification, translucency, and durability. That demanded a closer look at the traditional materials and their chemical makeup.

Silica is the glass former, that portion which does not dissolve serves as a filler, and is available in different mesh sizes with a melting point of roughly 3092°F (1700°C). Kaolin (also known as china clay) is a refractory aluminum silicate, with an average melting point around 3275°F (1800°C). Coming from different regions, it may include percentages of iron and titanium that will determine its overall whiteness and its potential to become translucent. Fluxes are melters that help to lower the temperature at which clay bodies and glazes mature. Depending on their composition, some will function at  cone 6, filling the voids between the silica and clay particles, and activating a chemical change by binding the refractories into a strong glass phase. Because there are a broad variety of fluxes available in the world, each one will have a different effect according to their composition.

After examining the melting temperatures of these raw materials, it became clear that using a lower-firing flux lowers the temperature at which the porcelain will mature. I had to find the purest among them and one that will balance with the other ingredients and melt at least at cone 6. The question was, what will activate the silica and kaolin enough to bring a strong translucent porcelain forth?

I followed the traditional porcelain recipe of 50% fluxes (in this case G200 HP feldspar and Minspar 200), 25% silica (200 mesh), and 25% kaolin. The kaolins I tested were Grolleg China Clay (GCC), Edgar Plastic Kaolin (EPK), New Zealand Halloysite (NZK), and Tile #6 kaolin. I tested them separately, as well as in combinations with each other.

For plasticity, I used C&C ball clay (C&C BC) in some recipes. When I used the ball clay in variations of 5–10%, I decreased the silica by 15–20% and reduced the kaolin proportionally to keep a total clay content of 100% throughout the recipes. To these recipes I added bentonite for plasticity, just enough to make it workable. Note: Ball clay has a high silica content that could possibly overload the clay body.

My objective was to test for whiteness and translucency, therefore I looked for impurities and opacifiers in the analytical make-up of the kaolin as well as the ball clay: Grolleg and EPK are similar in composition with little differences in iron content, but Grolleg has 0.30% less titanium than EPK. Tile #6 is significantly lower in iron, but has 1% more titanium than Grolleg. Of the four kaolins I tested, NZK contained a fraction less clay and more silica than the other kaolins, making it the whitest and most translucent. It was less plastic, but with only 0.25% iron and less than 0.1% titanium, I was excited to test for a translucent, and at the same time ice white, porcelain clay body.

Although plasticity was not my focus, I used C&C BC in some recipes. With more iron, silica, and titania and less clay than the kaolins, both translucency and whiteness were sacrificed, but  it resulted in a more stable porcelain.

*These are strictly tests. Examples of these tests can be seen in images 1–7. The number on the images corresponds to the recipe number in the chart to the left. Further testing, with materials available in your area, should be done to create stable porcelain clay bodies.

Tile #6 kaolin—with its much higher titanium content, but lower iron content than EPK and GCC kaolins—proved to have more plasticity and was more stable than GCC and NZK. Therefore, I came to the conclusion that Tile #6 required more testing. To start this testing, in figures 6 and 7, I used 5% more Tile #6 than the more translucent counterpart kaolin in the recipe. When testing to find a translucent porcelain, it is important to consider the following facts:

• Porcelain contains less clay and more fluxes; therefore, it is less plastic and slumps easier in the firing.

• More silica in a clay body may improve the glaze fit by changing the coefficient of thermal expansion of the body.

• A coarser mesh silica will improve stability, but will lower the plasticity. It will melt more slowly, so at relatively fast firing rates it will make less glass phase, thus making the body less prone to slumping.

• A finer silica mesh size reacts better to fluxes and improves the bond between silica and kaolin for a harder porcelain.

• During firing, silica may form crystobalite in the clay body. Excessive silica (30% and higher) will not dissolve in the fluxes and could result in dunting.

• Kaolin has a coarser particle size than ball clays, which causes porcelain to collapse easily on the wheel when used with too much water. At the same time, because of the open structure of porcelain, it dries faster. The wetting and drying process must be carefully controlled.

• When plasticizers are added to porcelain clay, it may increase the workability, but too much plasticizer may cause it to dry too slowly and make it difficult to work with. They can also affect the whiteness and shrinkage of a porcelain. There is a fine balance between enough and too much plasticizer. Be aware that some plasticizers like Veegum have fluxing effects. Careful testing of different amounts of plasticizers in the same recipe is advised.

• More feldspar will improve vitrification and translucency, but a good balance with silica must be maintained to prevent warping, especially when low-firing feldspars and frits are used.

• Some feldspars like nepheline syenite contain soluble materials that can cause flocculation of the clay that will make it hard and unworkable, even when the clay is not dry.

All tests were press-molded to a standard thickness and size and were fired in an electric kiln to cone 6.

the author Antoinette Badenhorst is a porcelain ceramic artist, writer, teacher, and founding member of http://teachinart.com, an online school bringing students and instructors together.