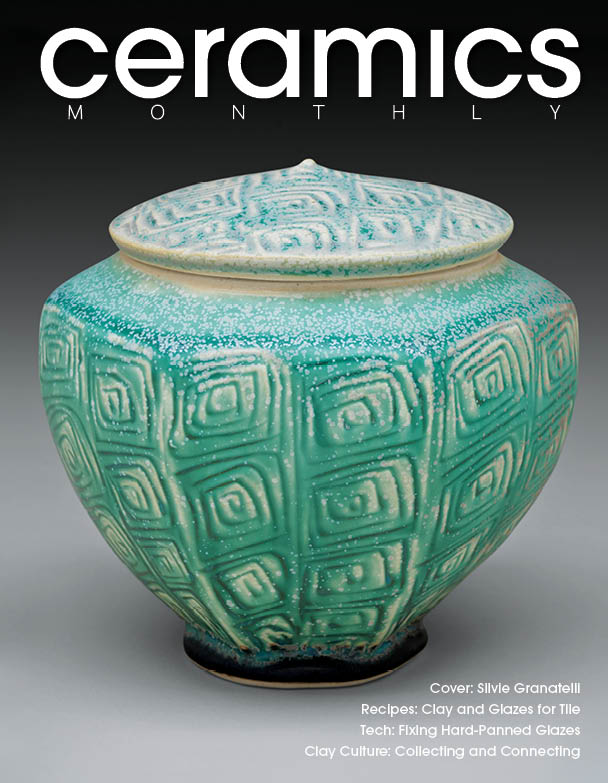 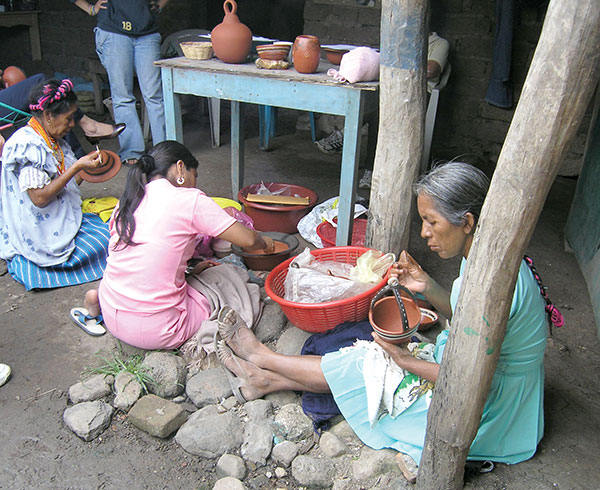 As a traveler and someone who enjoys working with clay, I have sought out native crafts and have felt an affinity with those who work with ceramics. From 2003 through 2006, I taught at an American school in Guatemala City, Guatemala. Siggy Holbik, a Chilean friend, owns an artisanal arts shop in Antigua, Guatemala, called Casa de los Gigantes. She has participated for many years in projects with a non-profit organization, AGEXPORT (Asociación de Exportadores de Guatemala), to assist village artisans and improve their local economies. The projects involve designers working with craftspeople to develop marketable products for sale, both locally and for export to a broader international audience. Aware of my former experience as a potter, she asked me along for a day trip to work with women potters in the village of San Luis Jilotepeque.

The trip to the village took almost four hours, driving northeast from Guatemala City toward the Honduran border. The design team consisted of four women: Siggy; Kyra Sapper, a potter; a university design student; and Amparo Montiel, an exporter of high-quality tipica clothing (traditional, embroidered clothing), who had participated in other AGEXPORT projects. As we approached, the landscape faded to the less verdant browns of eastern Guatemala. Jilotepeque lies in an area prone to drought. Many of the villagers suffer from poverty and hunger, struggling to survive on barely productive farms.

We met at the home of Juana, the head of the women’s pottery cooperative. Crumbling, unpainted brick defined a rectangular house topped by roof tile. Sparsely furnished, the house was open on one side, all rooms opened onto a courtyard.

Kyra explained that these women preserved ancient ways of making pottery, using the same techniques that have been practiced for thousands of years. They used clay from surrounding mountains, and, for color, used natural materials from nearby hills. They prepared the clay the same way that they make tortillas, with the resulting round slabs formed over molds based on gourd shapes.  “For historical reasons, it would be great to preserve how they make pottery,” Kyra added, emphasizing that the design group respected their traditions and methods while collaborating with them on new designs. 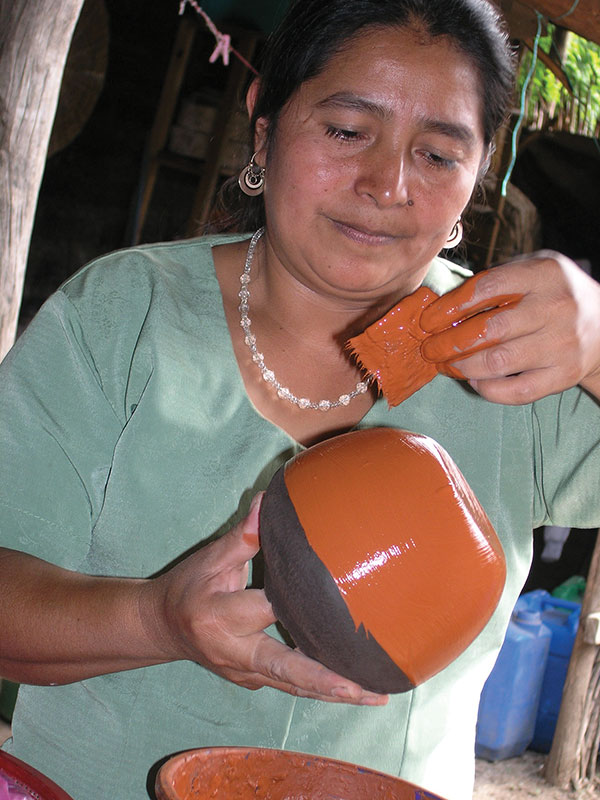 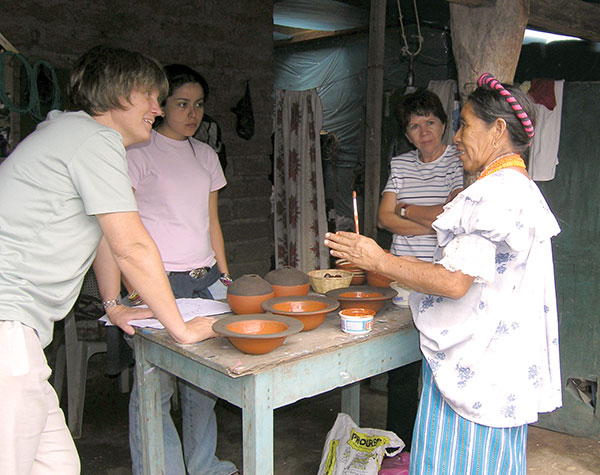 The potters’ customers have been local people, whose taste is very specific to the region. The potters sometimes painted with acrylic paint, competing with inexpensive, colorful plastic items. They made very little money; their prices were kept low because local customers were poor. The women were open to trying new forms and new design ideas.

At the back of the yard were ceramic supplies, including large, stacked sacks of powdered brown clay, dug up locally and crushed by the women of the co-op. Other clays, in hues of tan and red, were combined with water to make slip. Not available locally, black clay was brought from El Salvador and used sparingly for adding lines and ornamentation, which provided definition and contrast. No powdered chemicals or premixed glazes were used; however, wood ash, which is abundantly available, was added during the firing process.

Juana showed me a pile of unglazed, fired pots that had been formed around different sized gourds and were used as molds. Their earthenware pots were all handbuilt and shaped around one of these gourd molds. When the mold was removed, the opening of the pot was either pinched closer to form a narrow neck or widened for a bowl. Greenware was pit fired for hours in a mound of wood, ash, and dung. 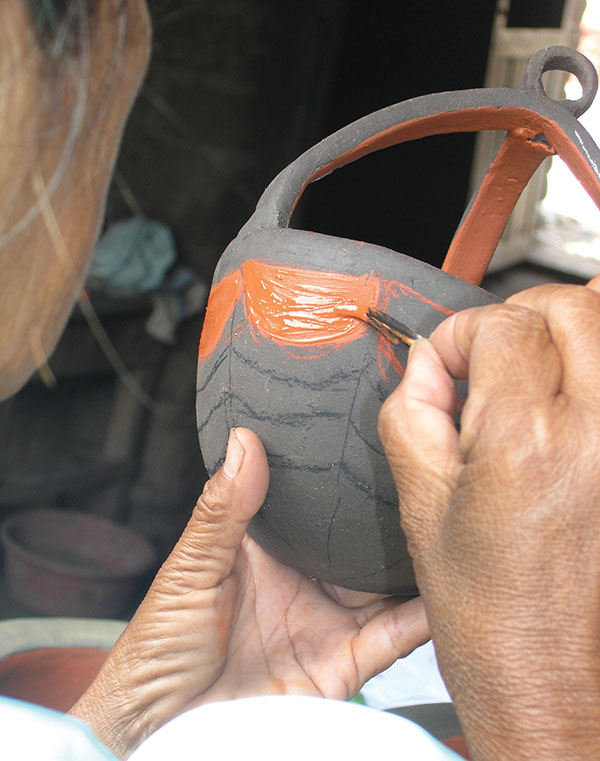 The visit that I participated in was the third trip for the design team. Initially, they learned about the potters’ processes and sampled their clays and materials. On the second trip, they returned with form drawings and worked with the potters to create some prototype shapes. Together, the designers and potters identified several forms they would build. The artisans had been asked to have ready three of each type for decorating on this trip: one set would be theirs, another was for the designers, and the third would go with Siggy to New York as sample pieces. Before this meeting, the designers had worked up models based on styles of the potters’ brush drawings; the design student brought sketches to review. “Their technique is simple so we stuck to basic designs. We decided to make a small bowl as a bird feeder and one that was a little bigger for a bird bath,” Kyra recalled.

“We were more interested in classic forms and colors using their own natural pigments,” Siggy noted. They incorporated some traditional shapes as well: small and larger bowls, planters, and classic round pots. Bisque-fired shapes filled their worktables that day: bowls, bird feeders, planters, weed pots with torn rims, and candle holders, some textured with impressions of tools.

The participants discussed and refined the designs, with ideas taking a tangible shape. I observed struggling artists willing to move beyond their timeworn customs, designers working within the local framework to suggest new directions and being involved in their application, and both designers and artists collaborating during painting, reworking, simplifying, or modifying prototypes. An evolving synthesis of ideas took place throughout the afternoon. 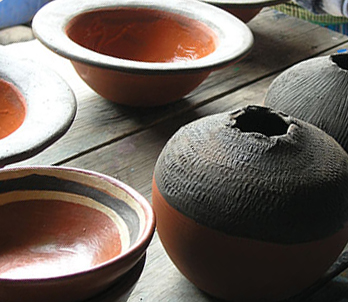 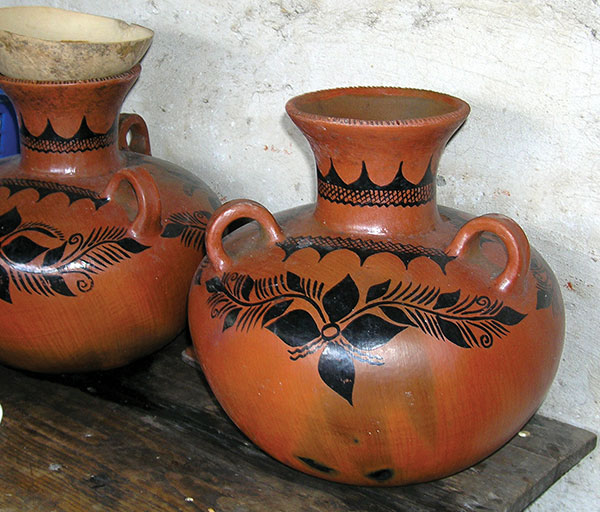 The design sessions were held during these visits. The discussions in person, surrounded by pots, yielded much better results.

Otonila, one of the leaders, wore indigenous dress. The others wore their Sunday best for our visit, pastel Western-style suits and dresses, even though they would be sitting on the dirt floor, in a room rich with the smell of clay dust in the air. Each of the women kept a container of clay under the table, so they could form a couple of pieces during breaks from other activities.

A variety of tools were used for decorative effects, most adapted from natural or available objects. Wet clay was smoothed with a hard piece of shoe leather. A handsome red slip was applied with a scrap of fabric. Once the painted clay began to dry, the surfaces were burnished with large brown seeds to appear polished, smooth, and shiny. Detailed brushwork was drawn with a paintbrush or chicken feather. A stunning collection of vessels in earthy tones soon replaced the basic shapes on the table.

That day, only a selection of pieces were completed to serve as models. Siggy picked up the finished pots about a month later after they were fired, and subsequently made the long drive from Antigua about twice a year, and later only yearly. Timing of the visits depended on how soon the artists could complete the requested items and when she could return to the village. They had no way of sending the pieces to her. “Pottery making was not a priority for them,” Siggy explained. “If they were harvesting or preparing for an event, or there was a sick child in the family, then pottery production would have to wait. I would call them, and once they said they had enough to justify a trip, I would schedule it.” 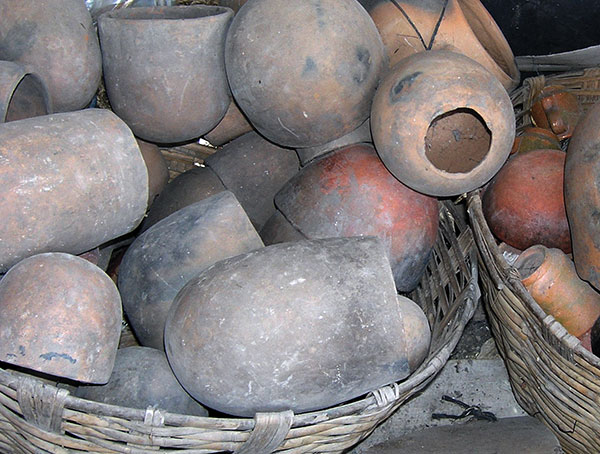 Although Siggy was able to sell many products created by other Indigenous groups beyond Guatemalan markets, including in shops in the US and through organizations such as Oxfam, she didn’t find a larger market for the Jilotepeque potters’ work for several reasons. Since they made pottery in their free time, it was hard to calculate the time needed for production. Also, they didn’t use kilns, so the pieces were more fragile than high-fired stoneware. Siggy explains, “Although I see myself as a bridge between the artisans’ world in Guatemala and the [cultures] abroad, in the case of these artisans, the gap was too large to work in the way the world abroad expects it to work. We sold the pieces at the store, but were not able to find a wholesaler that would make a bigger order. I was also worried about their ability to fulfill an order.” As her own business grew, it became difficult to spend a whole day to make the trip to the village. There was no infrastructure for the potters to bring their pieces to market themselves. Siggy worked with the women potters for about five years, and has not been in contact with them for some time.

One wonders if the collaboration with the group in San Luis Jilotepeque has made a lasting influence on their creative vision. They kept some of the forms they developed with the design group, but their local markets seemed to prefer the acrylic-painted pottery. “It appealed to their local customer base rather than these people (us), who came from far away,” Siggy mused, “and there was no assurance that we would continue to come and buy the products that we encouraged them to do.” Now that there is more connectivity and couriers, it could be easier for them to sell pots to a larger urban market, if they choose, at some time in the future. 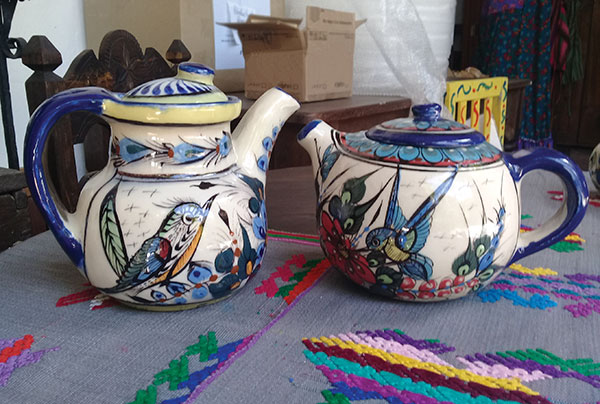 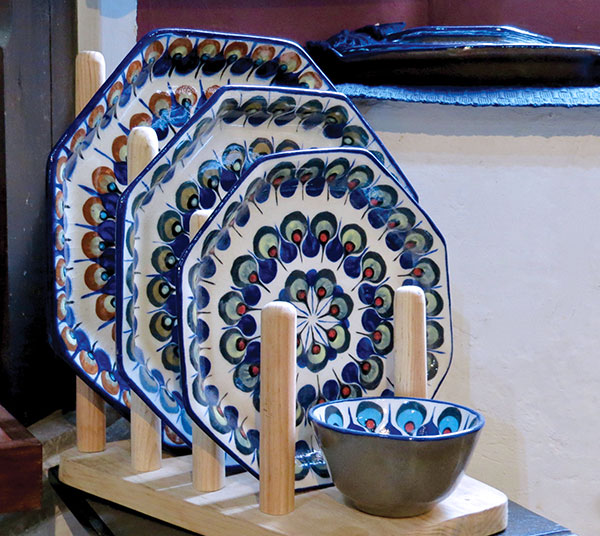 Siggy currently works with potters in San Antonio Palopó, a village on Lake Atitlán. Their colorful stoneware is fired in high-temperature kilns, and making pottery is their main activity, so she has found it more reliable to work with them. There was not a strong tradition of ceramic arts in the area until Ken Edwards, an American potter who lived in Jalisco, Mexico, for many years and developed pottery techniques there, came to Guatemala in the 1990s in search of rich clays. He built a gas kiln, hired native Kaqchikel to work in his studio, and taught them the techniques he had worked with in Mexico.

“I met Ken Edwards when he stopped by the store and I showed him around and introduced him to other potters,” Siggy recalled. “He was quite a character; he brought me his first ever production, and I bought it all!”

A few years later, Siggy worked with an Aid to Artisan project managed through AGEXPORT, bringing American designer Patti Carpenter to San Antonio Palopó. Carpenter worked with Edwards and his potters to design a new line of pots using the techniques they already knew.

Edwards is now in his 90s, and several families currently run the studio. The hand-painted techniques Edwards introduced are used today and Siggy still carries the potters’ line in her shop. The tourist economy around Lake Atitlán is thriving, and the pottery of San Antonio Palopó sells well with locals and foreigners.

the author Ruth Rosenfeld is an instructor and writer who lives and works in Georgetown, Colorado. To learn more, visit ruthrosenfeld.com.