Appears in the June/July/August 2015 issue of Ceramics Monthly. 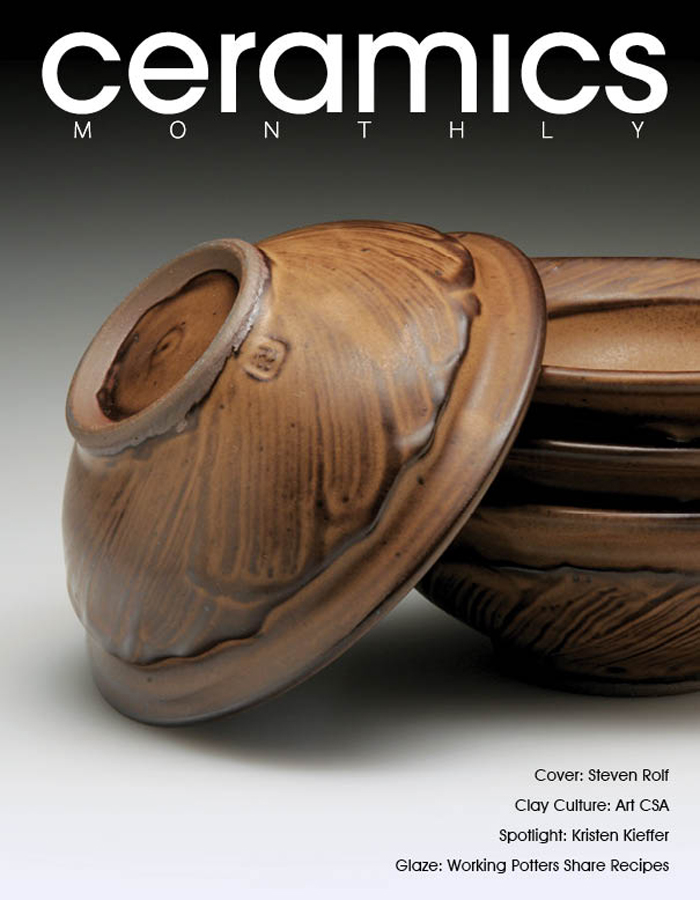 Alkali Fluxes: Lithium, sodium, and potassium are alkali fluxes. These are monovalent atoms, which means they bond chemically by sharing a single electron. Thus it takes two atoms of one of these elements to bond with a single oxygen molecule. As a result alkali fluxes are sometimes referred to with the shorthand notation R2O, meaning the oxide of lithium is Li2O, the oxide of sodium is Na2O and the oxide of potassium is K2O.

Mullite: An aluminum silicate crystal that can form in clay bodies fired above about 2000°F (~1100°C). Mullite gives strength and thermal shock resistance to high-fired ware. Commercial mullite, a clay body ingredient in some recipes, is made by firing a mixture of clay and alumina to high temperatures.

How does one alter the maturing temperature of a clay body? The little known secret is, it’s easy! The hard part is understanding why, so you do it right. 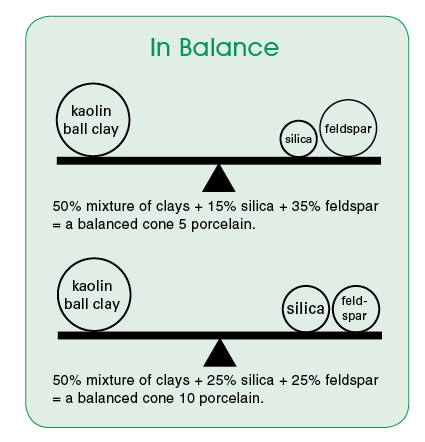 The most common high-fire porcelain clay body used in studios in North America is what I learned to call Alfred porcelain, also called 4×25, a name based on its components—25% each of kaolin, ball clay, silica, and (typically potash) feldspar. Let’s start with that and assume one wants to lower the maturing temperature of this recipe.

First—and this is where so many would-be clay body inventors wander off the path—leave the percentage of clay as is! A mid-fire body needs just as much clay for workability as a high-fire body does. Go right ahead and write in your note pad that you’ll need 25% kaolin and 25% ball clay. However, do make changes to the proportions of what’s left—the silica and feldspar. Those materials control the melting temperature of the body. Recall that at about cone 10 the porcelain body contained 25% feldspar and 25% silica. At cone 5, a porcelain body will need about 35% feldspar and only 15% silica. Why? Because the feldspar is the source of the fluxes needed to melt the silica. Since the firing temperature is lower at cone 5, more flux atoms in proportion to the silica present are required to accomplish the melting. The phrase “In proportion to” is important because changing the maturing temperature of a clay body is a little like being on a playground teeter-totter. If one changes the amount of flux without changing the amount of silica, the proportions of those two still change and the result will be different, just as the result is different when one child moves toward or away from the fulcrum on the teeter-totter and the other doesn’t.

Other sources of fluxes, say frits, can be substituted for some or even all of the feldspar and the result will be satisfactory as long as the proportion of the flux source to the silica is suitable for the firing temperature. I know a recycling-minded potter who digs a local silica-rich clay, and mixes it with a carefully tested measure of ground-up beer bottles. The resulting clay body fires to a very attractive stoneware.

To help understand why all this works, it is useful to make a picture in one’s mind of what’s going on inside the clay body as it fires. As the clay body rises above the melting temperature of the feldspars it contains, those melt into a glass composed of flux and aluminum silicate. Where that glass contacts particles of silica, the liquid glass begins to dissolve the outside of the silica grains. Somewhere between 2000–2100°F (1000–1150°C) the clay converts to mullite. However, mullite has less silica than clay. Where does the extra silica go? It goes into the glass.

If one examines stoneware recipes, they are typically 85–95% clay with the remainder being feldspar (or other flux sources). Leaving the amounts and proportions of all the clays in the recipe the same, but adding more flux sources will lower the maturing temperature of the body. With careful mixing and testing, at various flux levels one can get a mix of stoneware clays to mature into a fired body over a wide range, typically from around cone 1 to cone 11 or so. Understanding the Components Kaolin is weathered feldspar. In the weathering process most or all of the flux elements of the original feldspar have leached out. Chemically, kaolin (in its unfired state) is a hydrated aluminum silicate represented by the chemical formula Al2O3.2SiO2.2H20 where Al is aluminum, Si is silicon, and O, of course, is oxygen. Ball clay is kaolin that has been transported by wind and water and, being a bit battered about in the process, has been reduced to smaller crystals. As a result ball clay is more plastic and more readily formed than pure kaolin. Ball clay typically is contaminated with some quartz (up to about 15%, so it’s important to pay attention to the analysis of whichever ball clay one is using).

Silica is simply SiO2 and it’s also a product of weathered feldspar or pure quartz. However, unlike clay, the silica is chemically unchanged. Besides, the quartz crystals in feldspar are typically considerably coarser than the crystals of pure feldspar. Those coarse crystals of silica are what we usually encounter as sand. Whether it’s beach sand, desert sand, playbox sand, or sand for brick and block mortar, the odds are it’s all pretty much pure silica. The size of the sand grains varies widely and the smallest grains melt fastest in a kiln so fine sand works best for clay bodies.

Feldspars are all aluminum silicates combined with flux elements. They come in an astonishing variety. That is, their chemical compositions vary widely depending on the particular mineral deposit they come from. Potash (potassium) feldspars, are the most common and most inexpensive. Next are so-called soda spars or sodium feldspars. The truth is all potash and soda spars contain some sodium and some potassium. The name attaches to which element is dominant in the composition. As examples, Custer, a typical potash spar, has about 10% potassium oxide (K2O) and 3% sodium oxide (Na2O). Minspar 200, a replacement for the old F-4 soda spar no longer mined, contains 6.5% Na2O and 4.1% K2O as well as 1.5% CaO. I have not mentioned nepheline syenite, at 9.8% NaO the most sodium rich mineral commonly available, because I do not recommend it in recipes for clay bodies which may be stored. Some sodium can leach from this mineral and make the clay body less plastic. Other minerals containing fluxes include Cornwall Stone (a source of sodium potassium and about 1.8% calcium) and spodumene, one of several mineral sources of lithium. There are many more—enough to fill a book! 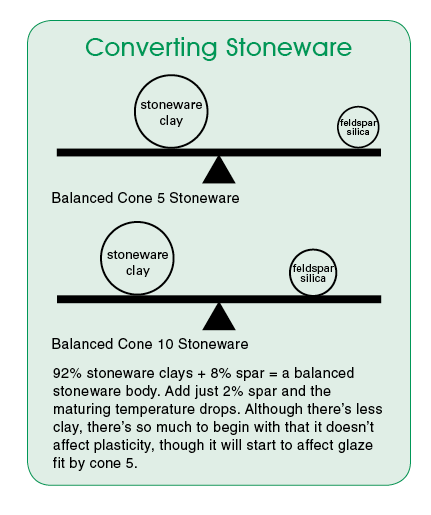 What if one wants to change the maturing temperature of an already mixed clay body? That’s a challenge, if only because most clay bodies do not come with a chemical analysis or a recipe. It requires care and patience to weigh, measure, and record the amounts of clay body and the different amounts of additions to the body that need to be tested in order to arrive at a satisfactory result that can then be applied on a larger scale. Such testing will take time, but the logic of what to add is the same as if one is making a recipe from scratch.

The important question is how to get those ingredients into a large quantity of wet clay. The honest truth is you really can’t do a good job unless you entirely dry the wet mixture first.

Bone dry clay can be slaked in an excess of water. All lumps will soften and the body can be stirred into a thin slip. Mixing dry ingredients into such a slip is fast, requires relatively little labor, and allows for highly uniform mixing. That’s important because poorly mixed clay is a cause of many drying and firing faults.

Still, the chore of dewatering the clay slip body remains. However, use of porous bowls or a plaster or concrete slab can make that task manageable. It’s important to check on the clay closely so once it reaches a consistency suitable for kneading or wedging, that can be done and the clay can be transferred to storage containers or used.