Appears in the September 2020 issue of Ceramics Monthly. 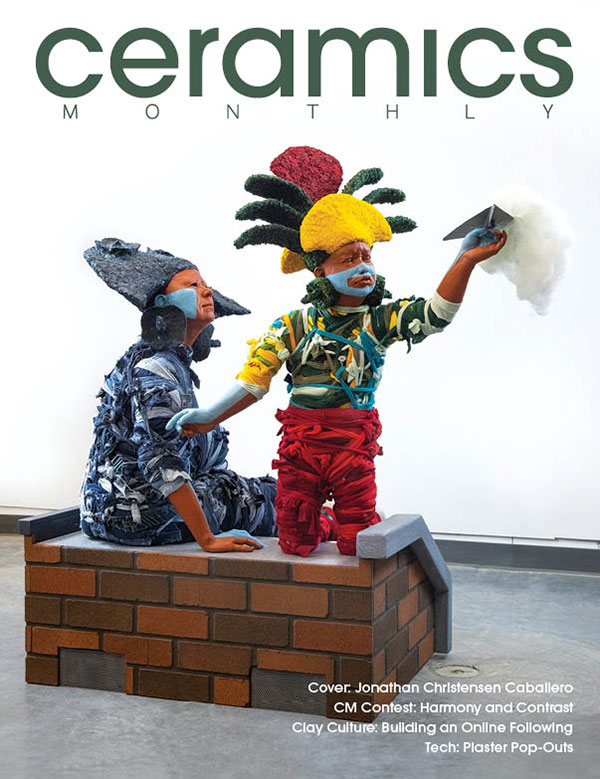 Plaster pop-outs are the bane of ceramic art. They occur after firing but are caused by wet clay becoming contaminated with pieces of hard plaster. Here’s what you need to know to avoid pop-outs.

Calcination: A process in which heat is used to drive off or burn off some undesired portion of a rock or mineral.

Gypsum Plaster: Gypsum mineral that has been calcined (heated) to 240°F (116°C) to drive off part of its water of hydration.

Lime Pops: In brick manufacturing, coarse pieces of limestone and calcium carbonate are calcined in the brick firing and then absorb CO2 again to swell and cause pop-outs on the brick similar to what we see with plaster.

Rehydrate: To recombine a chemical compound with water that has been previously lost, usually due to heating the compound.

Gypsum plaster is a remarkably useful material in the manufacture of ceramic forms. That is why it’s found in the vast majority of ceramic art studios and in industrial ceramic manufacturing plants around the world.

In making ceramic works, plaster is used mainly for molds. The molds are in turn used either for casting by pouring a liquid clay slurry into the mold or for shaping plastic clay by pressing it into a mold. A dry plaster mold is highly absorbent, readily pulling water from the clay slurry or the plastic clay. However, each time the plaster absorbs water and is later dried again, this weakens the mold. The number of wetting-drying cycles gypsum plaster can stand before beginning to crumble depends both on the quality of the plaster (regardless of brand) and the water it absorbs. Any plaster will eventually weaken if subjected to enough wetting and drying and that could potentially create chipping plaster, which can contaminate the clay.

Handling the mold creates opportunities to break off bits of even a new mold. Sharp edges and corners are particularly vulnerable to breakage. Given enough handling, eventually some plaster chips are created and those bits, unfortunately, often find their way into the clay.

When clay is fired, any bit of plaster present is totally dehydrated but remains intact as a piece of gypsum. Over time, the bit of gypsum rehydrates—it absorbs moisture either directly from the air or from water the work is exposed to. As the gypsum absorbs water, it swells. If the piece of gypsum is large enough, this swelling produces enough pressure within the ceramic that it will break out the surface of the work, leaving behind a conical cavity—a flaw that ruins the appearance (and potentially, the functionality) of the piece.

One can never assume a glazed surface or dense ware will, by itself, prevent rehydration from causing a plaster pop-out. Even if the work is water tight, it is never completely impervious to moisture in the air. That moisture can travel from the unglazed foot or through craze cracks in the glaze, or simply through the glaze itself. If plaster is present, it will rehydrate. The only question is how long that process will take.

The term lime pops should be used carefully. While the chemistry is a little different, it occurs in brick manufacturing. Limestone shrinks at about 1652°F (900°C) as it’s calcined to lime in the brick firing. The brick is typically fired a bit hotter. The lime inclusion is hydrated by moisture in the air and finally swells as carbon dioxide from the air slowly turns it back into calcium carbonate again. 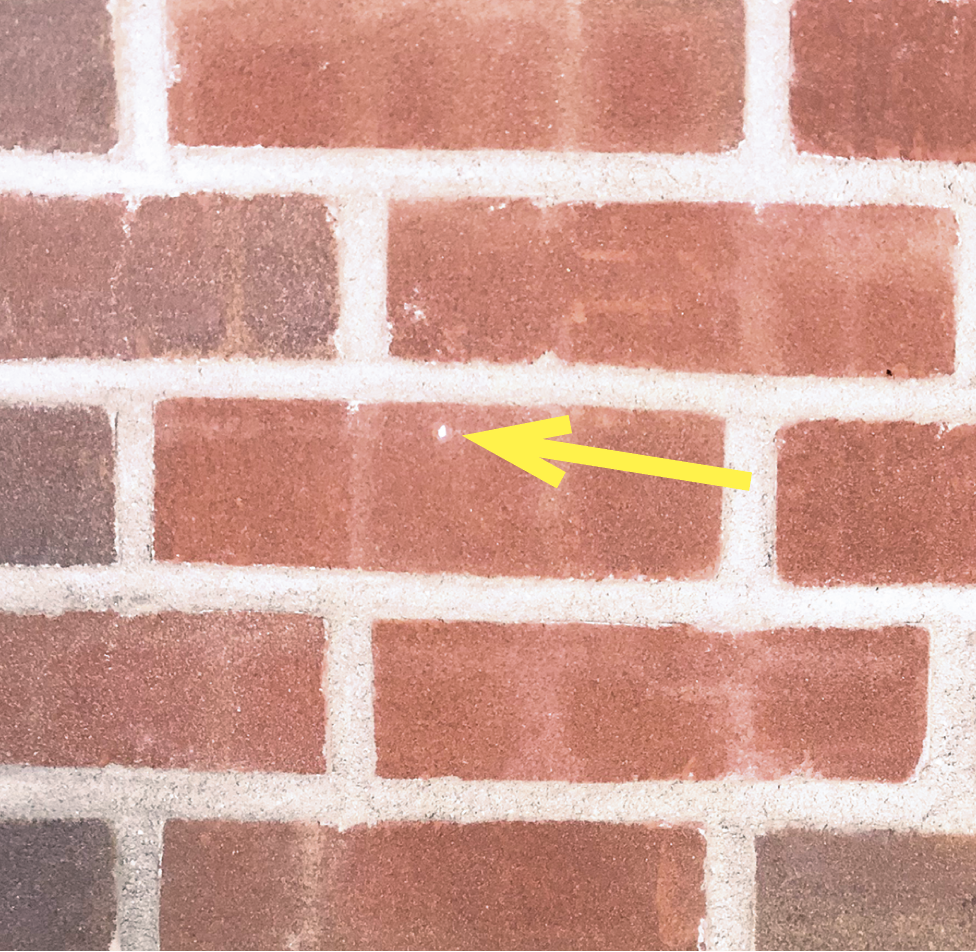 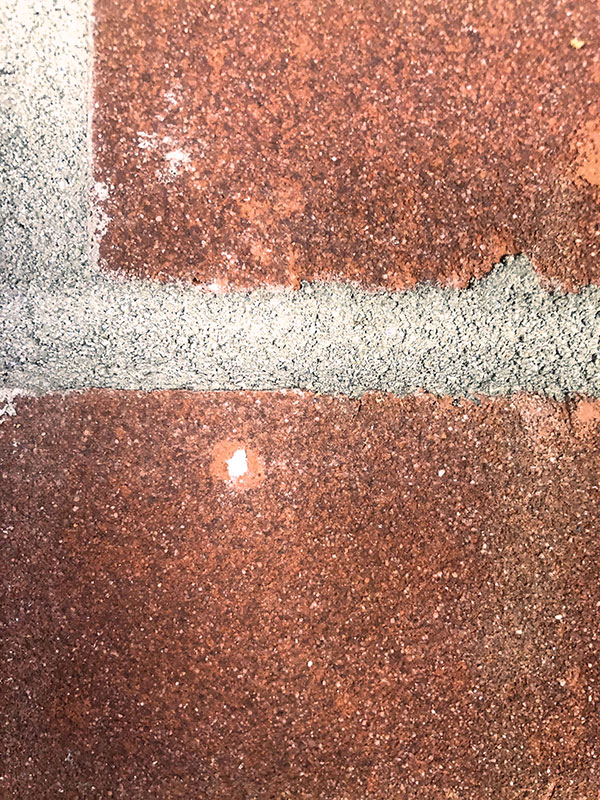 1, 2 Lime pops are not the same as plaster pop-outs because the chemistry is a little different. Lime pops (shown above to the left of the yellow arrow and in the detail image) occur in brick manufacturing where coarse pieces of limestone, calcium carbonate, are calcined in the brick firing and then absorb CO2 again to swell and cause pop-outs on the brick similar to what we see with plaster.

Dry plaster is made from gypsum, a naturally occurring mineral composed of hydrated calcium sulfate. Hydrated means the mineral has water that is chemically bound to the calcium sulfate crystal. The water is part of the mineral matrix.

Plaster is made by calcining or heating gypsum hot enough, to about 240°F (116°C), to burn off most (about 75%) of the bound water. The chemical formula of the gypsum and the reaction of calcining to plaster is:

Gypsum plaster is ground to a fine powder for use. When the powder is properly mixed with water, it forms a workable slurry that can be poured into a prepared mold.

The slurry is workable for a half hour or less and then begins to harden. That’s because the calcined gypsum absorbs water from the slurry and rehydrates to form a solid mass.

When the subject of plaster pop-outs comes up, a question that often follows is, “How large does the piece of plaster fired into the ware have to be for it to cause a pop-out later?”

The precise answer depends on the size of the piece of plaster and where it’s found in the ceramic. The closer a piece of plaster is to the surface of the fired ceramic, the smaller it can be and still cause a pop-out.

As a practical matter, though, plaster dust is never a cause of pop-outs. Particles of plaster of an 1⁄8 inch (about 3 millimeters) in diameter or larger, however, are definitely capable of causing pop-outs.

Plaster is safe to use in the studio as long as you are diligent about making good molds and keeping clean surfaces. Good studio practices always include regularly cleaning surfaces on which bits of plaster may accumulate. Passing casting slip through a fine screen while pouring it from the mold is good practice to prevent plaster from contaminating the clay slip and causing pop-outs in later slip-cast work.

Using molds with well-rounded corners rather than sharp edges prevents producing plaster fragments. This is helpful for press molds of any sort as well as slip-casting molds.

Careful attention to where and how plaster is handled in the studio and keeping surfaces where clay is handled cleaned of plaster chunks is the only way to prevent the heartache of plaster pop-outs later. 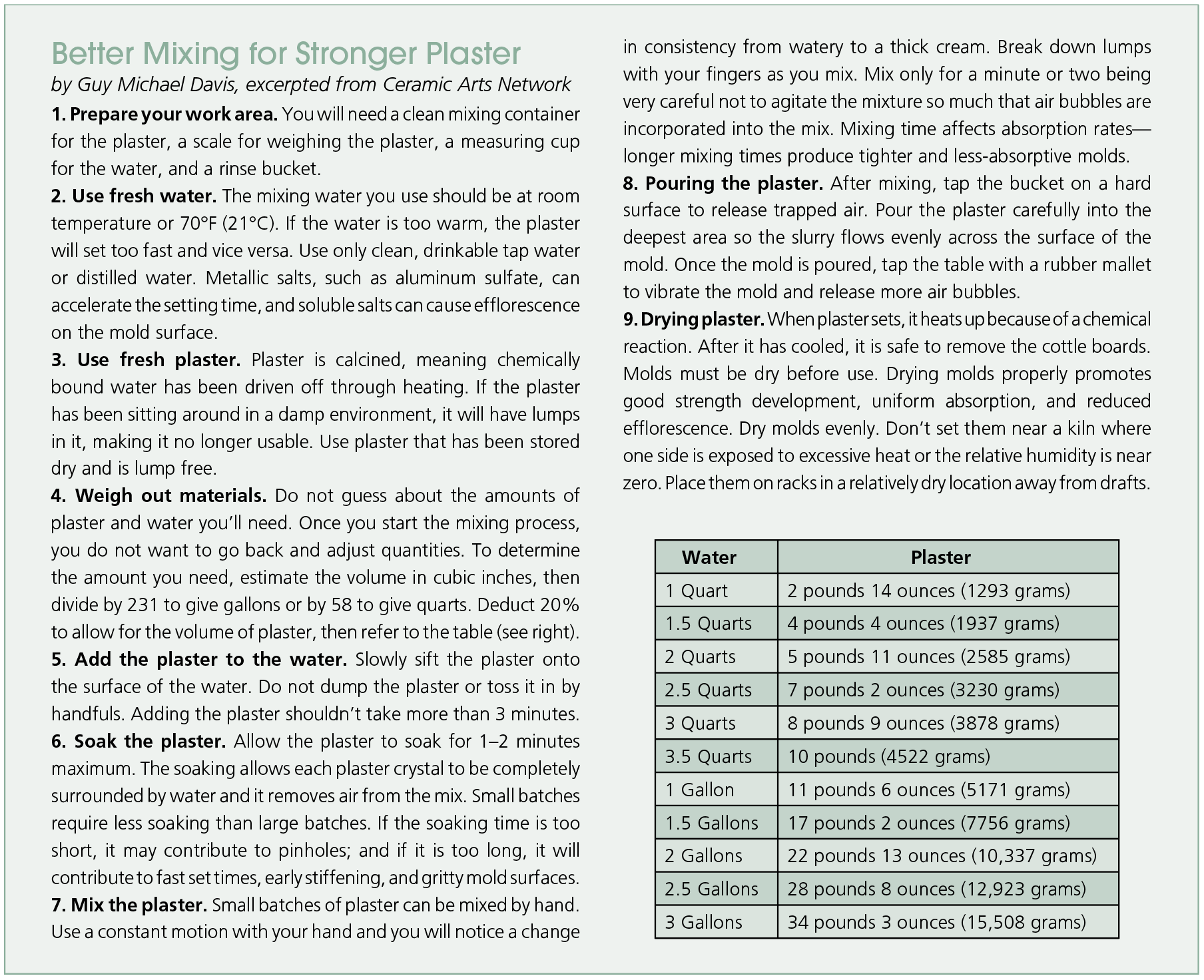 the author Dave Finkelnburg is a studio potter and practicing engineer. He earned his master’s degree in ceramics engineering from Alfred University.