Appears in the October 2019 issue of Ceramics Monthly. 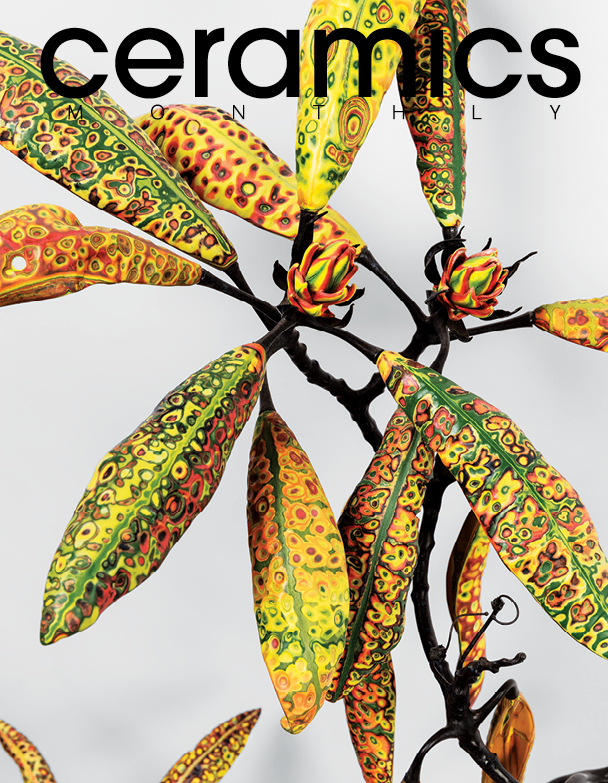 Don’t leave all your hard work to chance. Learn which clay and glaze properties (and other factors) determine the appropriate firing schedule.

Cristobalite: unstable crystalline silica that begins to form at 2240°F (1227°C) and is reactive to rapid temperature change upon cooling.

Cristobalite Inversion: The sudden change of the volumetric size in unstable crystalline silica upon cooling, usually resulting in tensile cracking in the glaze.

Exothermic Reaction: A process or reaction that results in the release of heat from a given material.

Molecular Moisture: Water that becomes chemically combined to the host material such as kaolin.

Spinel: Crystals that form from alumina and silica as well as magnesium, if present.

Strike Firing: A form of annealing used to alter the color of metallic oxides such as iron and copper.

Modern kiln controllers come with preset firing speeds for slow, medium, or fast bisque and glaze firing ramps. It is assumed that your pieces are bone dry, and there is no need for candling—although most controllers fire to 200°F (93°C) with a short hold to ensure atmospheric moisture is driven off before climbing in temperature. In addition, customized schedules can be programmed for specialty glazes such as down firing for crystalline glazes. Ramp speed selection should be based on the type of clay, the size and weight of your pieces, and the density of the kiln pack (1).

The type of clay you are firing is the first consideration in selecting a schedule (2). Edward Orton Jr. (the cone guy) conducted research on iron-bearing clays in the early 1900s, concluding that both organic and inorganic contaminants contribute to blistering, bloating, and black coring of fired clay bodies. He was one of the first to recommend a slow cycle to burn off these impurities. Today, modern mining technology has reduced organic impurities in clay minerals, leaving inorganic sulfides to deal with. Red clay bodies, dark clay bodies, or high-sulfur-content clays require a slow bisque cycle (108°F (42°C) an hour from 1250–1750°F (677–954°C)) to burn off chemically combined sulfur, because sulfur content causes blistering, bloating, and coring. In addition, the kiln must remain oxidized in these temperature ranges to ensure conversion of sulfur to sulfur trioxide gas.

The second consideration is the size of your pieces. Weight is a factor, but the surface area (shelf contact) is just as important. When pieces are heavy, with large foot rings or significant shelf contact, then firing speed becomes critical. At 1063°F (573°C) quartz inversion occurs—alpha quartz converts to beta quartz as silica expands. In the same temperature range, molecular moisture is being driven off, so while the silica is expanding, other materials are shrinking, creating a molecular earthquake. Porcelain is a high-silica body, and kaolin has high molecular moisture content; combined, these two factors make porcelain the most susceptible to dunting from quartz inversion stress. Inversion stress is often undetected because small fissures form that are not readily visible until the glaze firing when the contraction of the glaze opens the fissure (3). 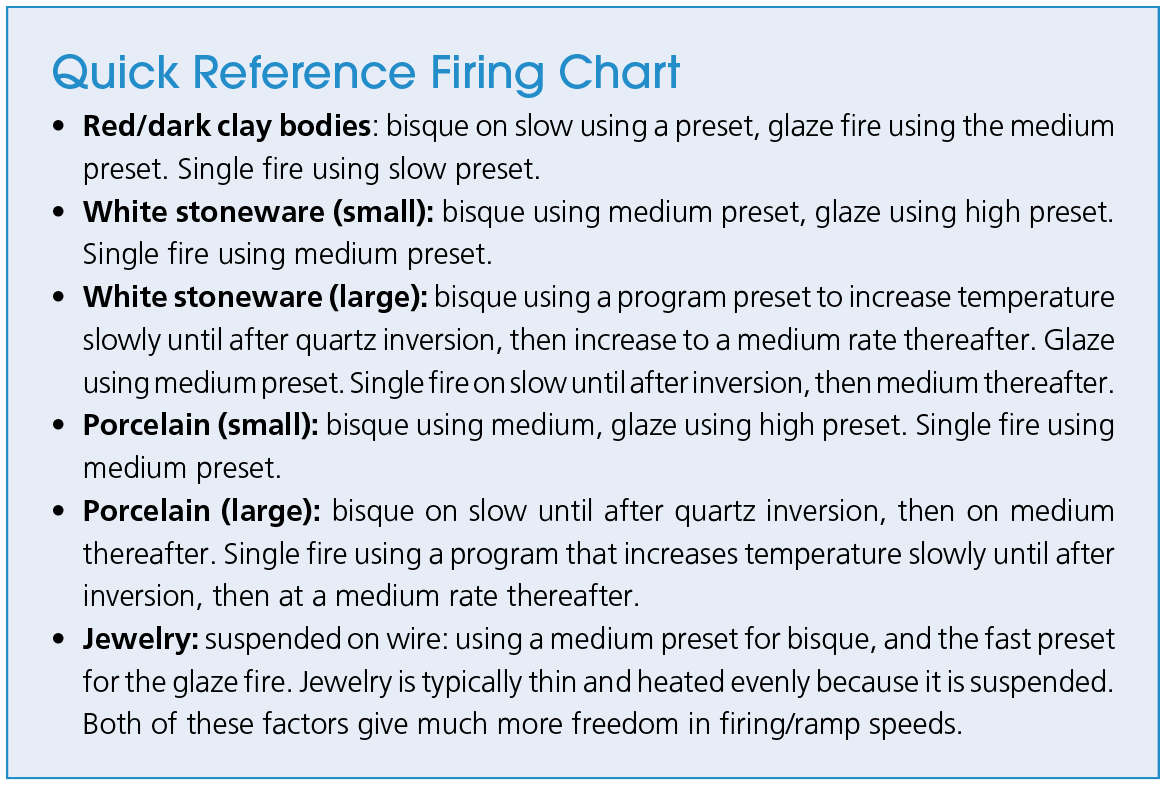 Porcelain is prone to dunting during quartz inversion, but any clay body can be susceptible if the object being fired is heavy enough, or there is much contact with the shelf. Dunting is caused by rapid cooling/thermal shock and inversion stress. It’s the result of uneven heat retention, not physical movement. A slow cycle of 108°F (42°C) an hour should be observed from 1000–1100°F (537–593°C), which minimizes the effect of quartz inversion on large pieces. Smaller pieces such as cups usually do well on medium bisque speed. In addition, wadding, sand, or alumina can be placed under the foot of large pieces to facilitate movement during  the firing, including inversion. If you densely pack your kiln for a bisque firing, a slow speed would be advisable to allow even heat distribution. Several studies (including one at the University of Illinois at Urbana-Champaign) show it takes up to 30 minutes for the ambient kiln temperature to penetrate a ½-inch-thick clay wall.

Slow and medium preset ramp speeds are primarily for bisque firings, with medium speed used in some glaze firings. The high preset ramp speed is a glaze firing cycle for bisque-fired pieces, and should be avoided for greenware. Large sculptural pieces or heavy platters with large foot rings should be fired on slow ramps through the entire bisque/glaze firing cycle. Cups, small bowls, sponge holders, and other pieces under 4 pounds can be bisque fired on medium speed and glaze fired on the fast cycle.

Single firing is becoming increasingly popular. Red or dark clay bodies should be single fired on the slow preset ramp to ensure sulfur (in the form of iron disulfide, sulfides, sulfates, salts, or lignite coal particles) is burnt off completely. Porcelain and white stoneware clay bodies can be single fired using the medium preset ramp if the pieces are not large or heavy. Adding a hold at peak temperature is advisable to ensure complete off gassing of feldspars. Single firing on fast speed should be avoided. Be sure premixed glazes are recommended for this use. 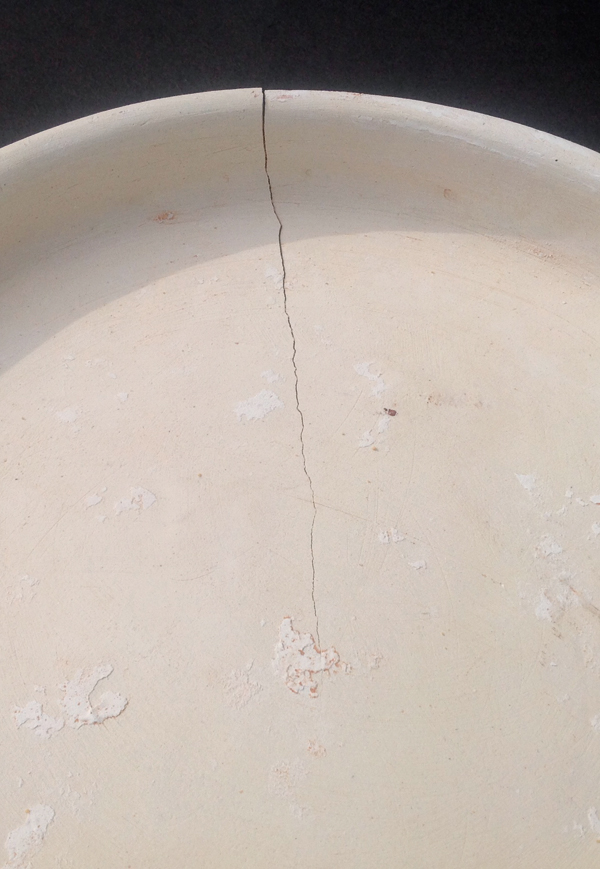 At 1750°F (954°C) silica and alumina convert to spinel, the precursor for glass development required for vitrification. This critical development phase is the basis for a minimum bisque temperature of 1800°F (1000°C). Clay is in an expanded state until 2050°F (1121°C) when an exothermic reaction begins to close the porosity. Potassium begins to melt at 2012°F (1100°C) and sodium begins to melt at 2044°F (1118°C)—both off gas as part of the melting process. As the clay body becomes denser as the temperature climbs, the gases from these feldspars push through to the surface under increasing pressure, resulting in pinholes or small blisters. Slowing down the rate of climb to 108–125°F (slow ramp speed) from 2050°F (1121°C) to peak temperature allows time for gases to escape, therefore reducing pinholes and increasing vitrification.

You can also program your own firing schedules using the chart above as a guide, with some exceptions. You can bisque fire medium-sized white stoneware or porcelain at medium speed (180°F (82°C) per hour) until you reach 1000°F (538°C). Then program a rate climb of 100°F (38°C) an hour from 1000–1100°F (538°–593°C) to move slowly through quartz inversion, then return to medium speeds thereafter. To control pinholing and blistering from off gassing feldspars, use a slow ramp speed (108–125°F (42–52°C)) per hour from 2050°F (1121°C) to peak temperature (for a cone 5–6 firing). The additional benefit of slowing ramp speeds at the top end of the firing is extended element life. You can also add a 15–30 minute hold if you fire to 2190°F (1199°C) to increase vitrification. Only select glazes that are not prone to running if you opt for a peak hold, unless that is an intended result.

Tips: To mimic the glaze results from large kilns, program test kiln firings with a 300°F (148°C) per hour cooling ramp from peak temperature to 1350°F (732°C). Glazes with high metallic oxide content can be strike fired after the initial glaze firing. Fire on medium to 1350–1375°F (732–746°C) with a 30–60 minute hold to alter their color. Cristobalite inversion occurs upon cooling at 482°F (250°C). Pulling spy plugs or sneaking a peek at work during this phase of cooling allows a rush of cool air into the chamber, which could result in tensile cracking as evidenced by a pinging noise from the kiln.

Firing schedules are critical for functional ware, with slight differences between cone 6 and 10. By incorporating a slow ramp speed (108°F an hour) from 2050°F up to 2190°F (1121–1199°C) with a hold, or to 2232°F (1222°C), a cone-6 body will reach maximum maturity. You will find differences in recommended hold times at peak temperature primarily because they are adjusted to kiln chamber size. As the capacity of the kiln chamber increases, so does the peak ramp hold time to equalize temperature. Witness cones provide the sure evidence of a successful firing.