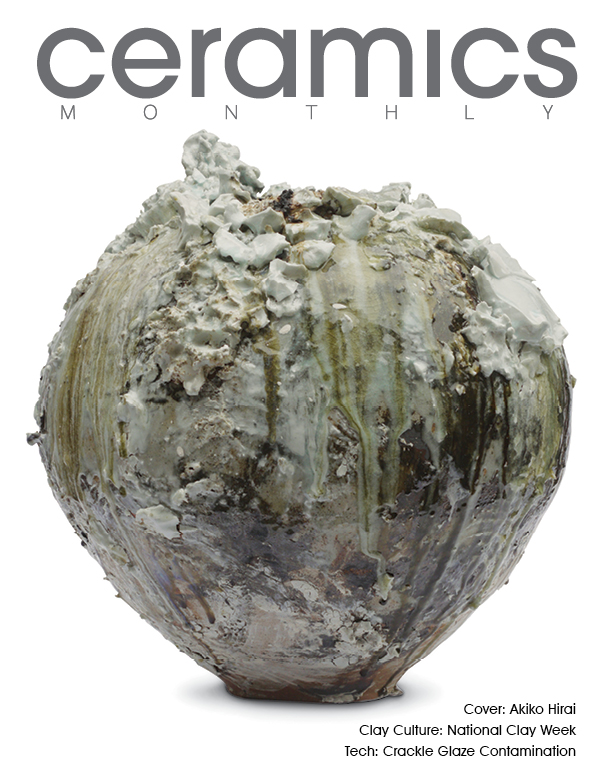 There is a common misconception in pottery, suggesting that crazed glaze surfaces are not food safe because they retain dangerous pathogens. But, through some mystery of the ages, glazed wares exhibiting crazing have been made and eaten off of for over 1000 years. Here is an explanation of crazing and glaze surfaces, microscopy imaging, and bacterial survival studies of crazed and non-crazed glaze surfaces for comparison.

Bacterial Colony: A circular region of visible growth in a petri dish where a bacterial cell has replicated to a visible mass of cells using available nutrients.

Coefficient of Expansion (COE): The rate at which ceramic (or other materials, including glasses, glazes, and metals) expands or contracts as a function of temperature change.

Dissection Microscope: An optical microscope that is designed for relatively low magnification imaging with visible light.

Pathogen: A bacterium, virus, or other harmful entity that can cause disease.

Scanning Electron Microscope (SEM): An instrument that scans a surface with an electron beam to generate a profile of the surface at a very high magnification.

Crazing most often exists as a difference in COE (coefficient of expansion) between a ceramic surface and a glassy, silicate glaze coating. As a ceramic cools after being fired, differences in COE between a clay body and a glaze place substantial pressure on the glaze. A higher glaze COE will result in a glaze cracking to relieve stress, often heard in the sound of soft pings shortly after unloading a kiln. Several days after unloading, you have likely noticed a change in the craze patterning and craze segment size.

For this example, two glaze bases were used: a common celadon base that is known for vibrant colors (and has high crazing) and the Bubble Base Glaze, which has muted colors and a COE more similar to that of clay (1). Note that in the case of the Bubble Base Glaze, a higher clay and borate/whiting content shows more muted color, while also demonstrating an expansion/contraction coefficient that is more similar to that of clay, resulting in effectively no crazing. 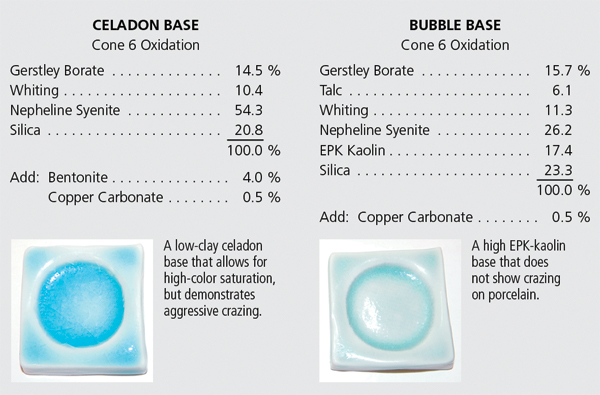 The Surfaces of Glazes

Though a glaze may look smooth, microscopically, its surface is full of bubbles, defects, fissures, and other features. Imaging using a dissection microscope and SEM of a crazed celadon sample (2), shows a range of cracks and bubbles in the glaze, trapped from off-gassing ingredients like borates or whiting. These bubbles could open at the surface, create a pore, or be trapped just beneath the surface. Additionally, crazed surfaces contain substantial cracks and fissures, which have been argued to retain dangerous pathogens.

To test this, tiles were intentionally contaminated with a bacterial strain of Lactococcus lactis, a common bacteria found in milk and used to make cheese. This bacterial strain could emulate the retention of more harmful bacteria on crazed and non-crazed glaze surfaces.

Liquid cultures of the bacteria were used to inoculate the sample tiles, by deposition of 1 mL of the culture (~1 billion bacterial cells) onto each of four sterilized, crazed test tiles, labeled C1–4 (3). A fifth tile was pipetted with sterile water to act as a negative control, and labeled C0. These tiles were then placed in enclosed petri dishes and kept at room temperature for 24 hours. After this period, the negative control and tile C1 were dried with paper towels. Tile C2 was washed with tap water, tile C3 was washed with warm tap water (107°F (42ºC)) and Alconox-based soap, and tile C4 was washed in a dishwasher (167°F (75ºC)) with Neodisher LaboClean FLA and Neodisher Z neutralizer). All the tiles were then dried with paper towels after the washes.

Following this, 1 mL of sterile water was pipetted onto each tile and allowed to rest for 15 minutes. As such, any bacteria retained in the tile could resuspend in the water. Following this, 500 µL of the water (which potentially contained bacteria) was pipetted from each tile and spread onto BHI agar plates, which were placed in a 98°F (37°C) incubator for 24 hours. During these 24 hours, any bacterial cell present can replicate, forming more cells in the same spot, which results in the appearance of a visible colony. Afterward, the plates were removed to observe and photograph any bacterial growth. Each circle in figure 3 is a culture plate. A dark spot on the plate represents a colony of bacteria that would have grown from cells retained on the tile. 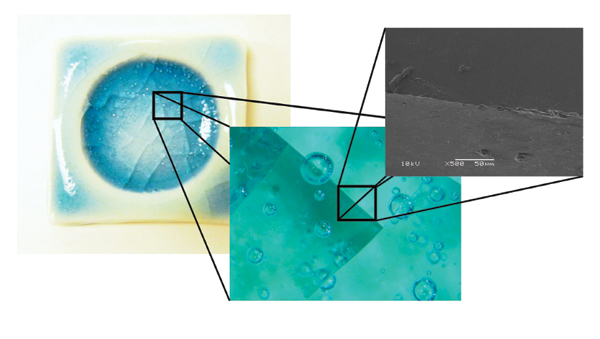 The samples C1–C3 retained bacteria through increasingly stringent surface cleaning; however, a regular dishwasher run was sufficient to remove or kill any bacteria held in cracks/crazing such that no colonies were detected.

While the Bubble Base glaze recipe does not result in apparent craze patterning, it does result in suspended bubbles in the clear glaze (4). These were imaged via dissecting microscope and SEM. Notably, bubbles do form crevices and openings at the surface, visible via SEM, which could retain bacteria.

Interestingly, bacteria were recovered from the non-crazed tiles that were only wiped and dried, suggesting that even the non-crazed surfaces can retain bacteria even after being wiped, dried, and sitting for 24 hours; however, all other remaining washing processes of the uncrazed tiles resulted in no bacterial colonies to be observable in culture plates (5). Note: All bacteria survival studies were repeated in triplicate. Results of all cultures and washes were consistent across all culture plates.

The samples N1–N4 (non-crazed) show bacterial survival only for sample N1, with no survival visible on other samples. 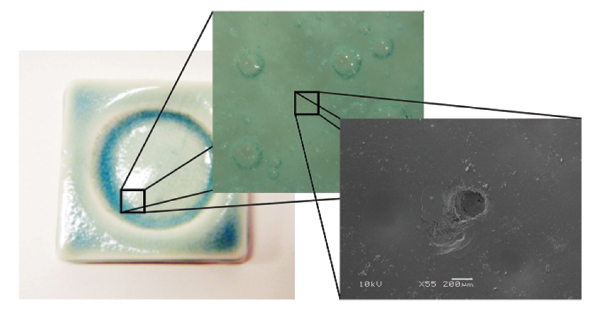 Despite the misconception about pathogens being impossible to remove from crazed surfaces, it would appear that cleaning your precious pottery well (ideally in a dishwasher) is all that needs to happen. To that end, keep making and using beautiful handmade pottery; just take the time to actually clean it after you use it.

the author Ryan Coppage PhD, is currently chemistry faculty at the University of Richmond. He teaches a Japanese Ceramics and Glaze Design class at the Visual Arts Center of Richmond and is starting to make a reasonable number of pots. www.ryancoppage.com.