Appears in the September 2019 issue of Ceramics Monthly. 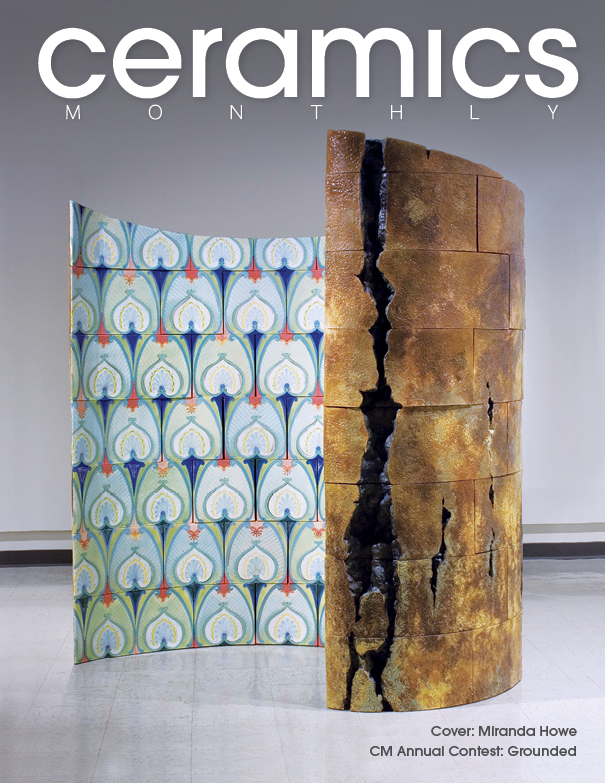 Plasticity is desirable in clay, but high plasticity often goes hand in hand with the troublesome property of clay memory. Learn how to predict and manage memory to prevent warping prior to firing.

1:1 Particle: The physical property of a single molecule of kaolinite defined by silica on one side and alumina on the other, with no inner layer; for example 1 silica:1 alumina.

2:1 Particle: The physical property of a single molecule of ball clay or montroillite defined by two outer layers of silica, with a single inner layer of alumina; for example 2 silica:1 alumina.

Memory: Clay particle orientation that is affixed by physical/ionic properties. Particles tend to return to that orientation even when distorted by various forming techniques once they start to dry out.

Plasticity: Extensibility or malleability of a clay body that allows it to retain a formed shape.

Pyroplastic: Deformation of a clay body caused by over firing or the excessive use of a flux in body formulation.

Yield Point: The amount of pressure required to deform a clay body, or rupture a formed piece after it has dried or been fired.

Memory is not a singular property, but rather a series of attributes all caused by a singular source, water. Water is required to transport a negative ionic charge uniformly across the clay particles, which in turn causes them to stack and align. In addition, water creates a low yield point that allows clay to be formed by various techniques. The sum of all of these properties is plasticity. Memory is caused by the loss of water content. As moisture is lost, the yield point increases until the maximum green strength is achieved. As drying occurs, the uniform negative charge reverts back to neutral, which in turn causes disorientation of the particles. Once the water leaves the clay, so does memory. Distortions that happen as a result of firing are due to pyroplastic issues unrelated to memory. 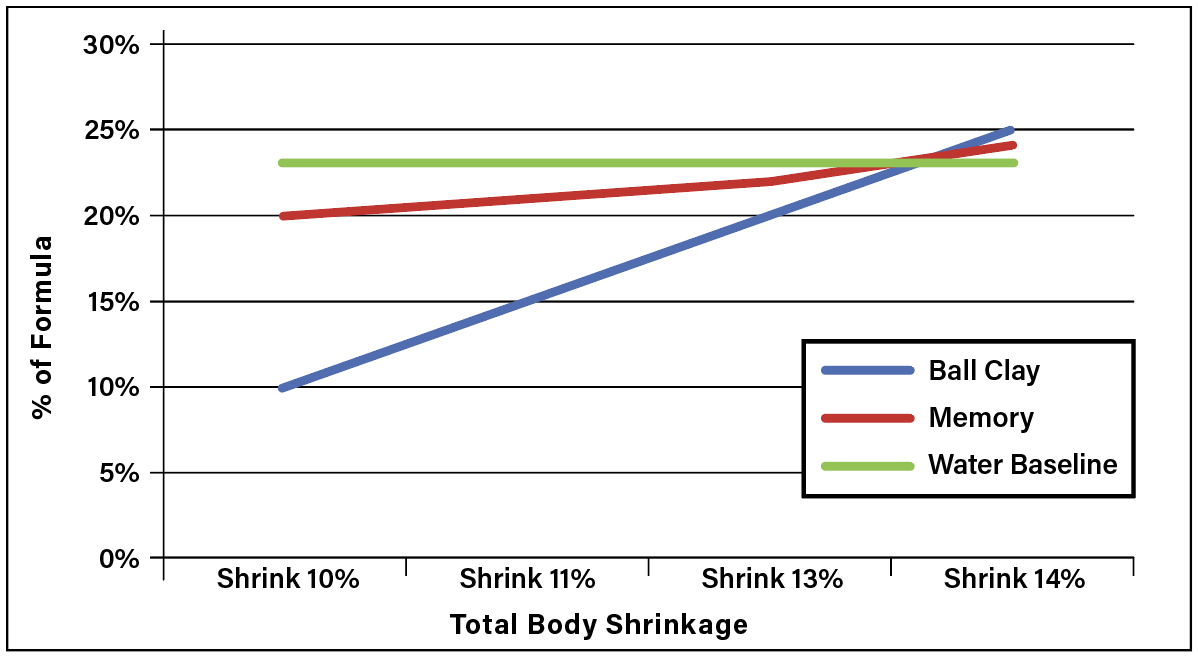 Memory, like plasticity, is a property of the ionic charges and the mechanical and physical attributes of clay molecules suspended in water. Water is the conduit that carries the ionic charge, which is absorbed by or held on the clay platelets, and creates tension on individual particles. In essence, it is a clay/water system that creates the physical properties that potters love about clay, while the evaporation of water creates the properties potters abhor. As the levels of plasticizers in a clay body increase, the amount of water increases because fine-particle ball clays absorb more water than coarser grained clays like kaolin. As both plasticizers and water increase, plasticity increases. However, shrinkage rates also increase, as does memory as water evaporates (1, 2).

It is well documented that a negative ionic charge is required for plastic properties to develop in a clay body. What is often overlooked is that a negative ionic charge also orients clay particles, commonly referred to as stacking. Using grains of rice as an illustration, the elongated ends align parallel to each other when moist. As drying occurs, the uniform negative charge reverts back to a more neutral charge, resulting in particle disorientation. As illustrated in figures 3 and 4, memory, in part, is caused by the polar attraction between neutral (dry) and negative (wet) areas of the formed piece, which is further compounded by particle alignment (wet) and misalignment (dry).

The third group of factors that contributes to memory is the physical properties of clay. Kaolin (porcelain) is a 1:1 particle that holds water on its surface. Ball clay, bentonites, and hectorites (Bentone MA) are 2:1 particles that absorb water into their core. When magnified, the silica and alumina of 1:1 kaolin particles appear side by side, while those of a 2:1 ball clay appear sandwiched. The outer layers are silica, the inner layer is alumina. Ball clay, bentonite, hectorite, and smectites all absorb water, but kaolin does not. For example: bentonite can absorb 15 times its weight in water and become gelatinous.

Knowing what causes memory is one thing, knowing how to minimize its effect is another. The first issue to understand is that high-plasticity clays often have high memory. Porcelain is more prone to memory issues, but any highly plastic clay body is susceptible. The second issue is water. The more water you add to a body during forming, the more you increase the likelihood of memory issues. The heavy slip that comes up when you throw indicates you are washing out fine particle plasticizers on the inner and outer wall, which in turn softens them and changes the ionic charge they carry. You have created differentials in surface tension, ionic charges, and particle alignment between the inner cavity and outer walls.

Another memory factor to consider is uniformity of the formed piece. Does this piece have uniform wall thickness, and/or do the attachments such as handles or other ornate additions have the same thickness? While ornate features make a piece attractive, they can also create drying issues including warping. Obviously thin walls will dry faster than thick walls, which is multiplied if they are very thick or very thin. Thick or weighty attachments made to thin walls can amplify the effects of memory. Damp boxes and plastic are used to help facilitate even drying. Wrapping work in plastic requires monitoring and judgments to be made as to when to remove the plastic. Light misting can also slow down drying of thin-walled areas, but care is required not to over saturate the clay with water. Sponging should be avoided as it will unevenly moisten a piece as well as remove fine particles and erase detailing. 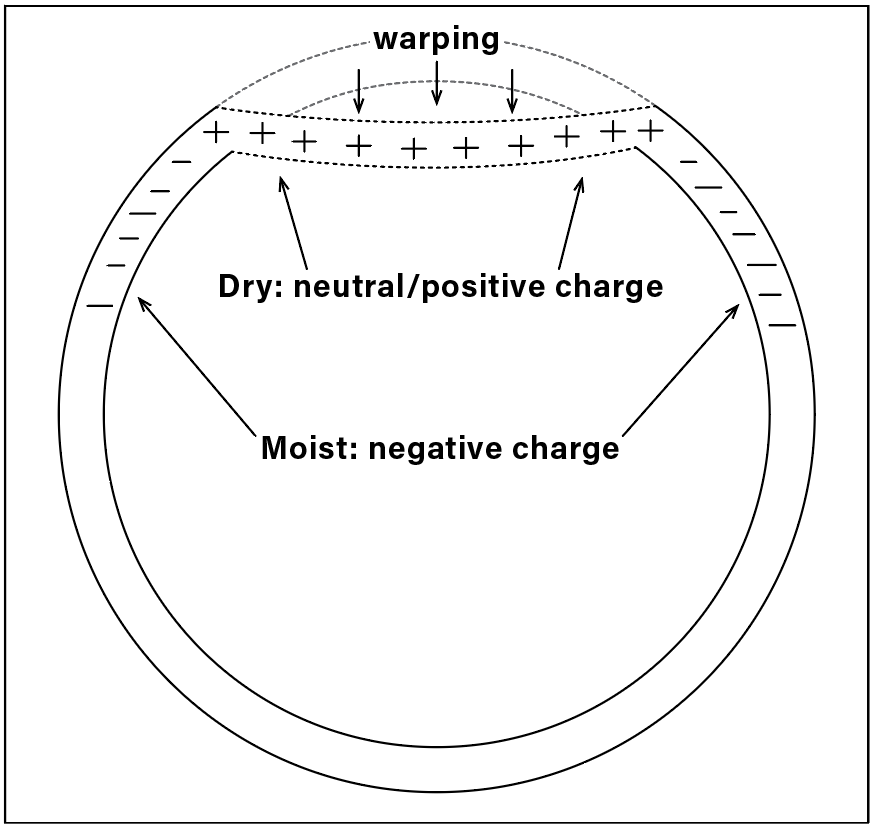 Slab and tile work are the most susceptible to warping caused by memory. Prevention begins when rolling slabs. Roll in multiple directions—not just one. Smaller pieces can be flipped half way through the process. Large slabs formed on a slab roller should be rolled in both directions, forward then backward. Rolling in one direction stretches the slab as much as it compresses the slab. Unequal compression can add to memory issues, and cause the slab to be more susceptible to quartz inversion stress when firing. Cut pieces from the center of the slab and avoid the outer 2 inches around the perimeter if possible.

The preferred method for handling tiles after being rolled is storage on drywall ware boards. While this method works, I prefer to use 1/2-inch Sande plywood, which absorbs and releases moisture at a slower rate and does not flex when lifted. I roll and cut tile on the plywood to avoid any additional handling of the clay. Placing a second piece of plywood over the tile adds just enough weight to lightly compress the tiles and helps prevent warping. Tiles and slabs will shrink while drying, so use enough weight to hold them flat, but not so much you create drag as they dry. Memory is a clay property that you have to manage as part of your forming process.

To control warping caused by memory issues, you primarily have to control the rate of drying. In addition, moisture content must remain uniform across the entire piece, whether it be a large bowl or a flat tile. Small, thin-walled bowls and cups are popular, but thin-walled pieces are susceptible to memory issues. Thin walls are less resistant to the stress and pull. For example: thin tiles warp more than thick tiles due to the dispersion of stress. Thin attachments to thicker pieces are also susceptible to memory issues. The shrinkage rate supplied by your clay supplier should also be considered. Highly plastic bodies have higher levels of plasticizers, which mean higher water content. Shrinkage rates above 12.5–13% indicate high plasticity, making those bodies more susceptible to warping due to memory. For slab or tile work, keep the shrinkage rates to 12% or under.