Appears in the September 2018 issue of Ceramics Monthly. 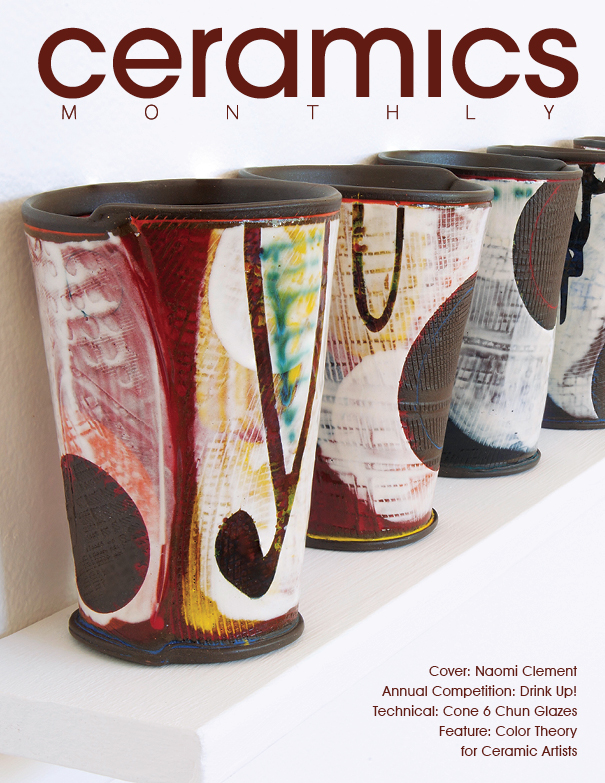 Most ceramic artists are familiar with the soft, sky blues of traditional chuns, which depend on only a small amount of iron oxide and a reduction firing. Similarly, many more have been disappointed with the oxidation fired result of these glazes—an unpleasant tan color. Here is an explanation of color reflectance theory, color comparisons, and a cone 6 oxidation chun glaze.

Absorption: The direct absorbance of light by a surface or solution—by charge transfer, d-orbital splitting in colored glazes, or by resonance in organic pigments.

Light Scattering: The process of light being absorbed and dispersed in random, various angles—effectively what makes the sky or water blue.

Pigment Color: A perceived color that is constructed from the remaining light that reflects off of a surface after a pigment (or pigments) has absorbed a portion (or portions) of the original light source.

Reflection: The remaining light that is not absorbed by a surface, that is then reflected off, and returns to the viewer, for the eye/brain to rebuild as color.

Reflectance Peak: A dominant reflection wavelength maximum that dictates the main color of a surface (or contributes to the final color).

Saturation: The purity of a color, often defined by how narrow the reflectance peak or emission peak of a particular light source is. As the peak broadens, a color loses saturation and becomes pastel/less bright or pure in nature.

Subtractive Color: When various portions of the visible spectrum are absorbed by pigments, in which those absorbed colors are essentially subtracted and you see a color resulting from the remaining wavelengths that are reflected back to the eye.

Tyndall Effect: The scattering of light from a distribution of small particles that results in a sky-blue color, much akin to that of water, the sky (also water), and opals.

To forego stepping on all possible toes, credence should be given to the origin of the modern chun-style glaze. Chun originated over a thousand years ago in China, first reported in the Song Dynasty, as Jun Ware. While many chuns have been created with soft blues to reds, purples, and greens, modern chuns seem to be notorious for an unmatched sky-blue color that is mostly not attainable in oxidation, let alone at cone 6 in oxidation. A chun blue is a very magical thing to see and has proven to be difficult to reproduce in terms of color quality.

If you have tried making a sky-blue chun glaze in cone 6 oxidation, like I did, you will likely start with cobalt—the most notorious of blues. Your blue will be far too aggressive—just far too blue. And as you start dialing it back, you’ll notice that it turns gray. You lose color. It is not the chun you had hoped for.

In a section of his book The Ceramic Spectrum, Robin Hopper showed a range of chuns fired in reduction (The Beautiful Variations of Chun Glaze) and suggested that the chun color results from a scattering of light in the glaze due to the presence of small bubbles.

The chun color effect has been compared to that of opal in nature, in which scattering of light is caused by water that is trapped in a silicate matrix. This scattering of light is referred to as the Tyndall Effect. Interestingly, this same scattered light effect can be created with small amounts of opacifier—tin oxide, zirconium silicate, or titanium dioxide—such that an opalescent glaze profile is possible, but not necessarily a strongly colored one.

To characterize the chun glaze color, reflectance spectra (light that reflects off of a glaze surface) were obtained from the surface of the cone 10, reduction-fired, chun-glazed mug in figure 1. The reflectance profile is centered in the blue portion of the spectrum (which lets you perceive it as blue), but is incredibly broad/wide. In color theory, the narrower a particular range of color wavelengths is, the purer or more saturated the color appears. As that range of light wavelengths broadens, that color loses saturation and lightens, approaching white light.

Thus, the sky blue of a traditional chun would have a blue-centered peak that is incredibly broad. As such, your eye would rebuild the color as a light blue with low saturation, observable in the reflectance spectrum of the glaze surface (2).

This suggests that one could create a mildly opacified glaze base and slightly increase reflectance near the color wavelength of choice to reproduce a cone 6, sky blue, oxidation-fired chun—or any pastel color, for that matter. 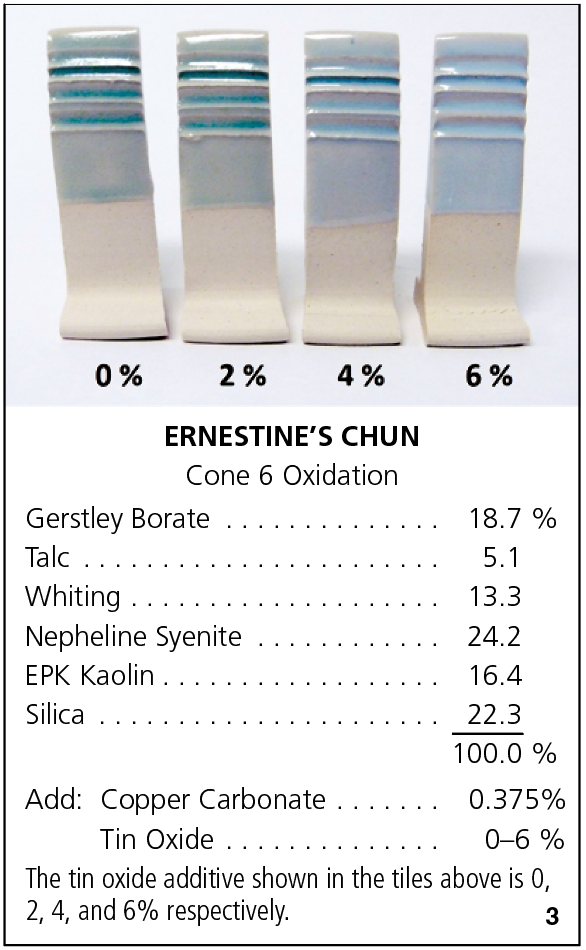 Being fortunate enough to teach a ceramics class at the Visual Arts Center of Richmond allowed me to offer a glaze-design side project for brave students. In a recent class, Ernestine Sitkiewicz took on the cone 6 oxidation Chun Project (after I had failed with numerous cobalt oxide and cobalt carbonate attempts). She tried everything under the sun and she ended up with a stunning and slightly green-shifted, chun-like glaze.

Ernestine used an adapted glaze base, worked with a range of opacifiers (with tin being the purest white and Zircopax being slightly off-white in color), and settled on a very small amount of copper carbonate as her colorant. As tin was the purest opacifier with respect to color, testing using tin had the most promising results. Figure 3 shows examples of her results as the opacifier is increased. Note that the color of the tile shifts from green to blue as a function of increased opacifier (and thus increased scattering effects).

Interestingly, the reflectance profile of the glaze changes as the ratio of added tin increases, from no tin added to 6% tin added, which increases the reflected light of all wavelengths (4). Tin oxide, like most opacifiers, forms insoluble crystals in the glass matrix. When very small, these scatter light. As they grow, they start to reflect all light, making for a white glaze. Notably, the reflectance profile on the left is mostly green/yellow, and the tile appears green. The addition of 6% tin oxide increases reflectance of all wavelengths, and increases the scatter effects, which forces our eye to perceive the color as a faint blue.

The resulting glaze is a cone 6, oxidation-fired chun with the faintest tint of green when used on Laguna Frost cone 6 porcelain (5). The glaze looks similar to that of a cone 10 chun, but does not use expensive stains, and only contains simple raw materials and colorants.

Interestingly, a reflectance profile of this surface (6) is nearly identical to that of the cone 10, reduction-fired chun glaze in figure 2. The center of the broad reflectance peak is shifted to slightly higher wavelengths, adding a mild green tint to the chun, with small absorbances in the blue and red region of the visible spectrum.

the author Ryan Coppage is currently Chemistry faculty at the University of Richmond. He teaches a Japanese Ceramics and Glaze Design class at the Visual Arts Center of Richmond and is starting to make a reasonable number of pots. www.ryancoppage.com.