Appears in the October 2016 issue of Ceramics Monthly. 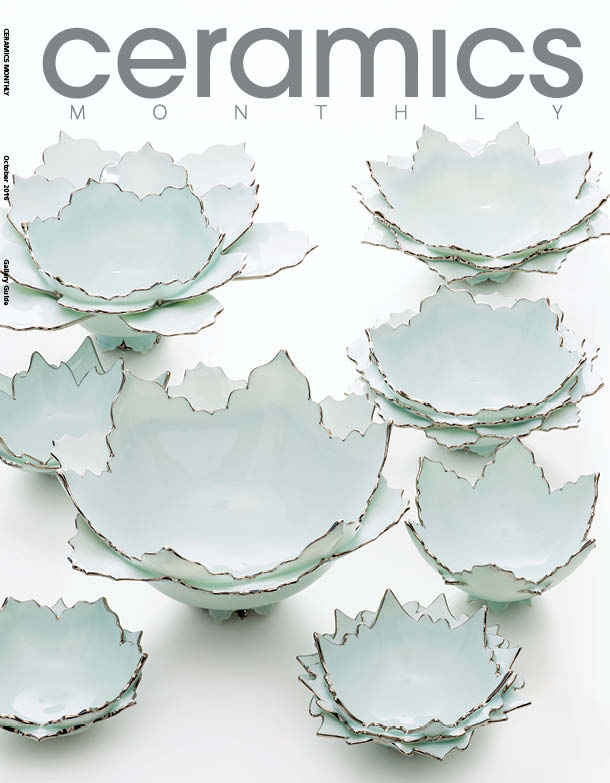 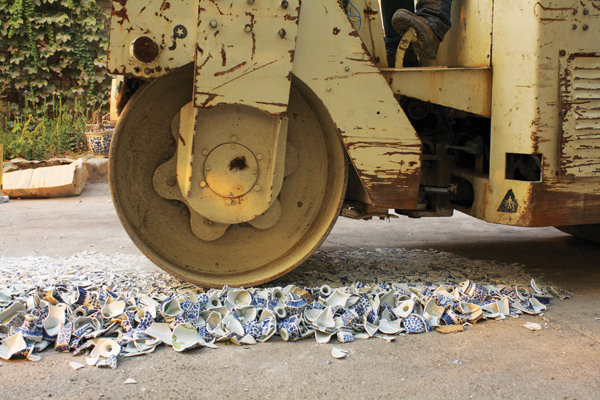 Mountains of discarded porcelain. Labor as material. Recycling as a natural resource. These are just a few phrases that Recycled China co-founders Jeffrey Miller and Thomas Schmidt commonly employ when describing what they make, why they make it, and how their unique story as a Beijing/US-based design team came to be.

“I remember when we were first in Houshayu, the suburb of Beijing where I taught and Jeff was a visiting artist,” recalls Schmidt, who earned an MFA in Ceramics from Alfred University and now serves as Assistant Professor of Interdisciplinary 3D Studio and Digital Fabrication at the University of North Carolina at Charlotte. “We would occasionally see trucks pass by us with mountains of sorted material. It could be huge blocks of compressed metal, bundles of cardboard stacked together, massive tangles of water jugs tied together with rope, and so on. Seeing something with that sort of visual weight flying through the street was sort of absurd. It was more impactful than most of the gallery or museum experiences I had been to in quite some time.”

Drawn to these excesses, the team eventually learned that materials from construction and demolition contribute to the highest percentage of wastes across the globe, and that over half of this waste is ceramic materials. China, and Jingdezhen in particular, is patently known for industrial production of pottery on a scale unimaginable to most Americans, although many family-run shops still abound. Four percent of all ceramic wares produced in Jingdezhen are discarded, a notable percentage of such large-scale work. Miller and Schmidt grew up in the US, experiencing products as purchases and end results. Neither had ever come so close to the constant, life-altering, scale of manufacturing such wares as they experienced in China. 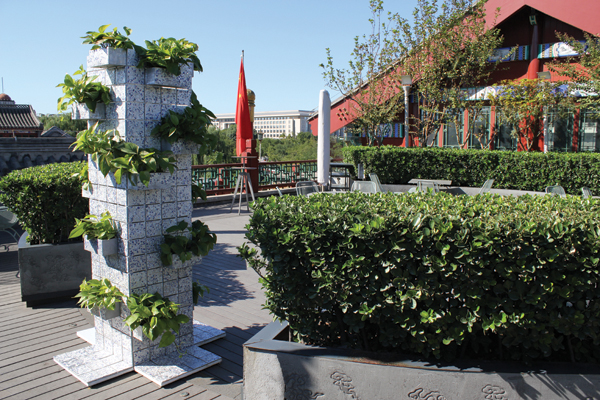 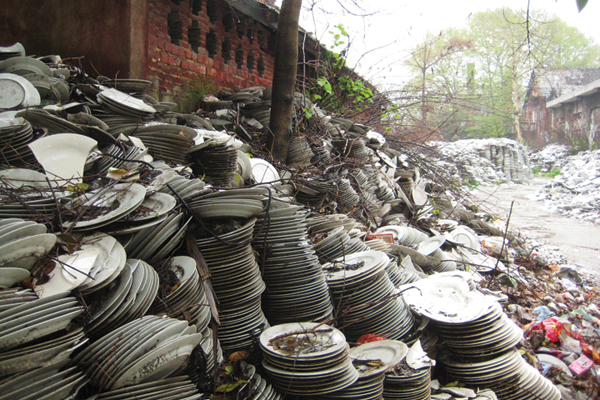 In 2010, they co-founded Recycled China with the aspiration to transform discarded ceramics within China into interior and exterior installations, adding a small line of functional flowerpots, as well. But the team’s entry into design work didn’t begin by viewing these imperfect vases, plates, teapots, cups, bowls, and other wares as a natural resource of the area’s craft traditions. That insight came later. Their initial explorations were purely conceptual, considering waste on its own terms. The team did not identify as environmentalists and still doesn’t take it quite that far, though years working with porcelain seconds, scrap aluminum, and demolition bricks have certainly increased Miller’s and Schmidt’s awareness of impact and reuse. “We are not attempting to make a big political statement,” cautions Schmidt. “We are taking samples of a cultural by-product in the same vein as geologic core samples. Our work exists almost like a scientific specimen.”

Miller, who lives in Beijing and heads most of Recycled China’s day-to-day operations there, earned a BFA in ceramics from Alfred University, where he met Schmidt in 2007. He explains that their desire to address the actual labor going into the discarded wares Recycled China uses came out of the conceptual idea of “recycling the time and craft within each of the works into abstract material.” In this way, the passage of time and the physicality of labor—two things only evident by implication in a finished product and never actually tangible—became elemental, necessary ingredients in each tile, wall installation, or other collection of surfaces the team makes. In this regard, it’s possible to hold an hour in your hand, mount a season’s worth of work on your wall, or design the facade of a building with the story of a particular family in mind. 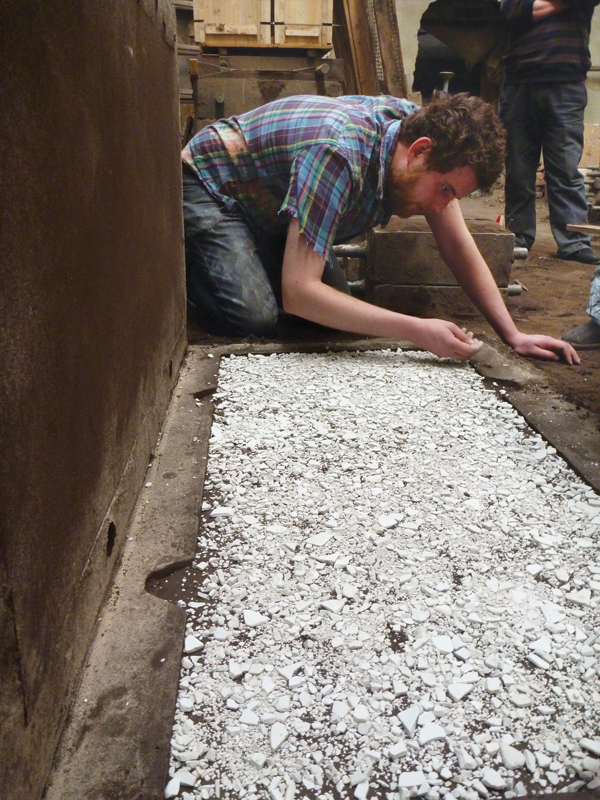 “Every material has a kind of history to it,” observes Miller. “Collectively, there’s a lot of labor being discarded and destroyed. Every material we use, especially masonry materials, has been made by hand in a factory. Reusing these materials brings to light the inherent labor in everything around us.”

All of this is made possible because of a collaboration with an aluminum foundry in northern Beijing. A new process resulted from the collaboration, allowing Recycled China to infuse the wares that they steamroll and crush with recycled aluminum that the foundry would otherwise discard. Aluminum, which melts at a relatively low temperature, readily moves and curls around the aggregate, then cools quickly. The result is a textured landscape or tapestry. No pattern can ever be repeated or replicated, and—other than the distinct fusion of aluminum to clay or brick—the results can never be predicted. “Our first big project with the aluminum factory was to produce a large series of wall pieces for the Ullens Center for Contemporary Art. We were casting large panels packed with porcelain shards,” explains Schmidt. “The owner and employees of the factory were visibly disappointed that there were holes the aluminum had not completely filled, while Jeff and I were so excited and trying to communicate that we wanted to recreate [what they saw as ] flaws. It was a hilarious moment for all of us. Every production instinct was telling them to avoid flaws!”

Perhaps one of their more provocative projects is the work Recycled China completed for Beijing Design Week in 2013. Chart Contemporary curators asked Recycled China to participate, securing funding from Capital M and the US embassy. Miller and Schmidt created Sustain Your Ability, a series of three site-specific installations.

One installation featured an abandoned hutong. Hutongs are small, traditional alleys formed by residences. Many are connected to one another, thus hutong also refers to neighborhoods comprised almost entirely of these connected structures and alleyways. “We combined our tiles into the existing structure . . . which made it easier for people from the community to investigate and learn about our work. The tiles on display were from discarded Baijiu bottles. Baijiu is a very popular liquor in China and actually the most consumed alcoholic beverage in the world. The shards from the bottles were so recognizable that someone saw the pattern and brought us an unopened bottle of the same liquor.” 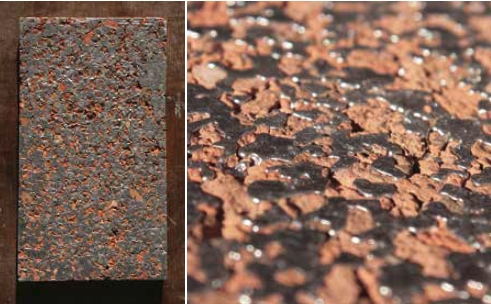 Going forward, the team would love to create a series of limited-edition tiles based on an exact location, for instance, where a completely demolished hutong (neighborhood) once stood. “It would function like a record of the hutong that has been leveled for a high rise,” says Schmidt. Other aspirations include responding to the wear and tear of architectural spaces, working with natural elements that may have cropped up in the spaces between missing bricks or cracked walls.

It’s worth noting that the team doesn’t feel limited to working only within China. They’ve started conversations with a terrazzo factory in North Carolina that would allow them to work with material other than aluminum and therefore make even larger and lighter panels. “We’d also like to pivot the North Carolina area to respond to its manufacturing practices and history. The state has a 300-year history with brick and is the second largest brick manufacturer in the US, behind Texas,” says Schmidt. Another company Recycled China would be thrilled to work stateside with is Koehler. There are many ways Recycled China can grow in the coming years. 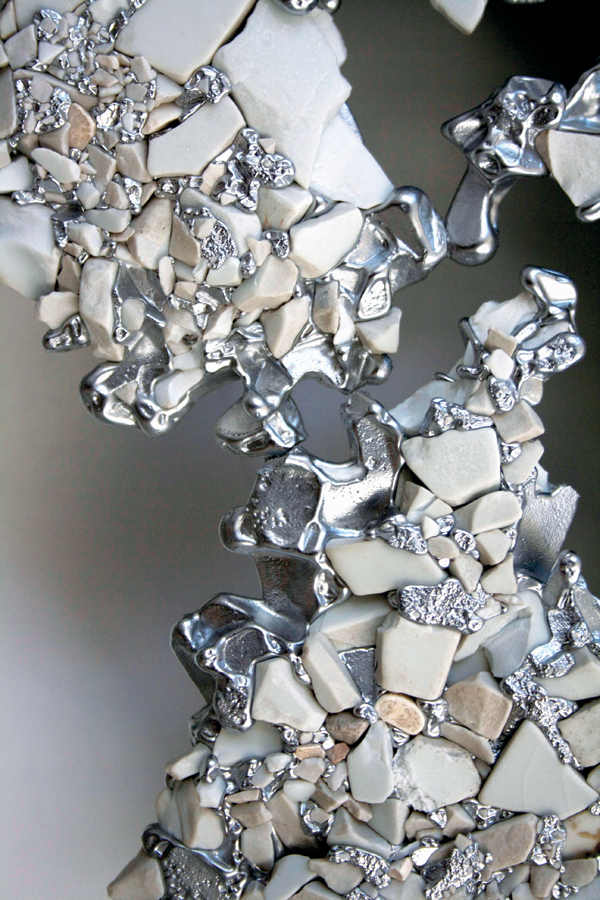 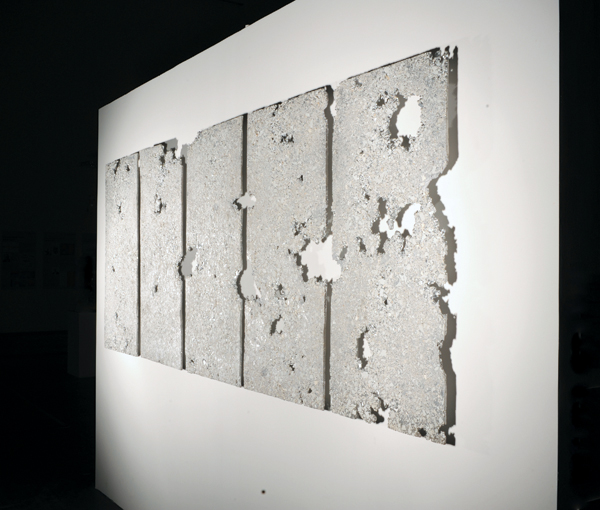 As Recycled China, Miller and Schmidt’s work has been exhibited at the 8th Gyeonggi International Ceramic Biennale in South Korea where they were awarded the Bronze Prize, the Arizona State University Art Museum Ceramics Research Center, Archie Bray Foundation for the Ceramic Arts where they received a Director’s Award, Kirkland Arts Center where they received Best in Show, Beijing Design Week, Zanesville Prize for Contemporary Ceramics at the Zanesville Museum, Lacoste Gallery, Matthias Küper Gallery, and the Ullens Center for Contemporary Art in Beijing. 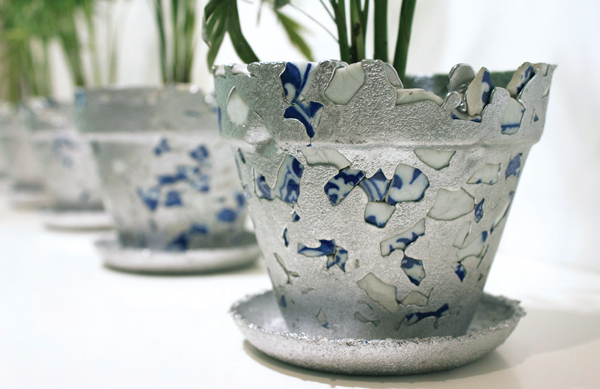 Recycled China is a Beijing/US-based design firm and collaboration by American artists Jeffrey Miller and Thomas Schmidt. Recycled China’s work will be in an exhibition at The American Museum of Ceramic Art from October 8, 2016 to February 26,  2017. This is the last stop of the traveling exhibition “Recorded Matter: Ceramics in Motion.” In early 2017, their work will be exhibited in the Clayarch Gimhae Museum in Korea, as well as the V&A Gallery of the new Shekou Design Museum in Shenzhen, China. Learn more at www.recycledchina.com.

the author Katey Schultz is an award-winning author and frequent contributor to Ceramics Monthly. Her first book, Flashes of War, features characters in and around the wars in Iraq and Afghanistan. She assists artists with their web content and artist statements through her website, www.kateyschultz.com.