Appears in the March 2017 issue of Ceramics Monthly. 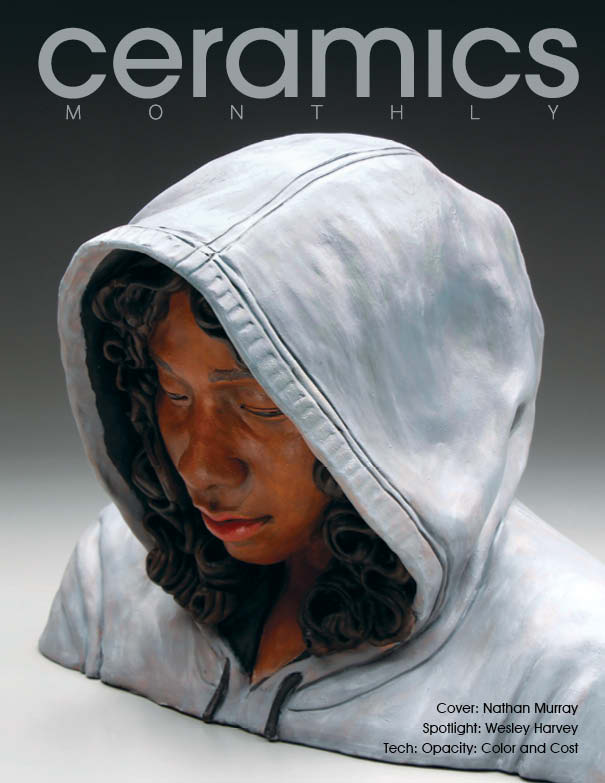 Crystal Field: A theoretical model that describes the splitting of d-orbitals that is caused by anion neighbors in a coordination environment around a transition metal, causing color or change in color.

Ligand: A molecule bound to a transition metal in coordination complexes, often with octahedral and tetrahedral symmetries in (but not exclusive to) crystal-field theory.

Opacifier: A material added to a system to make it opaque through various mechanisms, most often by forming small crystallites in a substance.

Opacity: Lacking translucency in nature—the inability for light to pass through a material.

By adding opacifiers, we limit the length of the light’s path to penetrating just barely into the surface of a glaze; it never reaches the clay and is almost immediately reflected back out, going through significantly less material. This shorter path length means that an opaque glaze needs roughly 5–10 times more metallic oxide colorant than that of a translucent glaze to achieve the same color intensity. For example, a jewel-toned teal celadon uses only 0.5% copper carbonate (CuCO3) while an opaque pastel green would call for 4% CuCO3—eight times the metal content for similar, if not slightly less, color intensity.

There are two main opacifiers (one inexpensive, the other costly) commonly used in ceramic glazes. Aside from general opacity, their properties are not commonly known. While they are sometimes used as replacements for one another, there are situations when one or the other is more suitable.

When used as opacifiers, tin oxide and Zircopax (zirconium silicate) are somewhat similar. Aside from these two, titanium dioxide and calcium phosphate (bone ash) are also used to opacify glazes, but both also promote visible crystal formations (microcrystalline surface matte glazes and crystallized iron tomato reds, respectively) and bring far more to the table than just opacity. Focusing on tin oxide and Zircopax for now, each creates small crystallites in a glaze that prevent light from passing through—making it opaque and milky. This characteristic means that you can use tin-oxide or Zircopax opacified glazes on almost any clay body and they will mostly look the same. Translucent glazes specifically need to be used on white clay bodies for the full color effect. Light travels through the thickness of the glaze, strikes a white clay body, minimal light is absorbed, and it is then reflected back out, going through the glaze again and to the eye, colored by various metals suspended in the translucent glaze. Colored clay absorbs more of the light, leaving less to reflect back to the eye.

Comparatively, zirconium silicate is somewhat cream-yellow in color as an opacifier while tin oxide is more starkly white, with somewhat greater opacifying power at equivalent amounts. Most highly opaque glazes often call for 15% Zircopax and those that call for tin oxide (as a whitener and opacifier, but not as a color modifier) reach only 12–13%. In figure 1, similarities and differences are shown on Brooklyn red tiles to demonstrate opacity, ranging from 2–8% opacifier of each. It is barely noticeable that the zirconium-opacified tiles (1b) are slightly cream colored compared to that of the tin oxide (1a), but the two are similar. The difference here exists as slight color differences for the snobby (like me) and price differences for the parsimonious (me, again!) with tin oxide hitting roughly $30/pound and Zircopax at $5/pound. With all of this outlined, unless you are concerned about the slightly yellow nature of zirconium silicates, tin oxide can be replaced with a cheaper opacifier for creamy white opaque glazes. 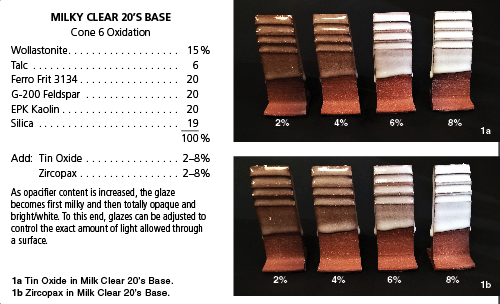 Aside from opacifying power, tin oxide has a massive and mostly unsung role that is largely not discussed or commonly known to the ceramic world. Without the presence of tin oxide, chromium is a stark emerald green in a glaze, which is actually responsible for the color of emeralds in beryllium aluminum silicate (beryl). In emeralds, the chromium exists in trace quantities, just like chromium in most raspberry reds, at 0.15%. The difference between emeralds and rubies is actually very, very slight. The placement and coordination environment around the chromium actually dictate whether beryl will be green, as in an emerald, or red, as in a ruby, though the two are nearly identical. Similarly for glazes, a base glaze with somewhat high borate (flux, easy glaze melt, fluidity) content and 0.15% chromium oxide comes out a soft emerald green. As tin oxide is added (up to 6% content), the crystal-field nature of the glaze is changed. The coordination around the chromium shifts slightly and red is transmitted versus the blue-green of chromium without tin oxide. In figure 2a, a raspberry red glaze is prepared without tin oxide (the crystal or ligand-field modifier). As it is reintroduced to the glaze in 2% increments, the crystal-field nature of the glaze is changed, which can contribute to a shift in absorption bands and the change in color that we know as raspberry red. Occasionally, tin oxide is perceived as just an opacifier for these glazes. Upon being replaced with Zircopax to reduce costs, you no longer have red, but a mildly opaque pastel green in figure 2b, followed by confusion and tears. 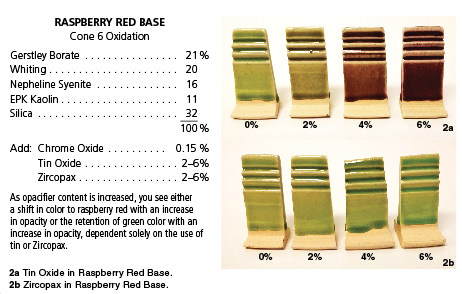 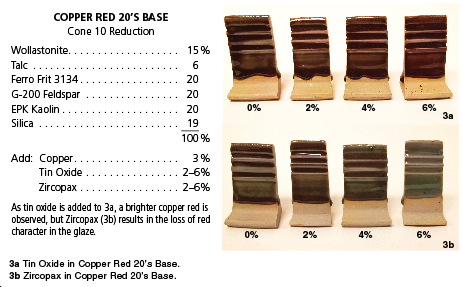 Similarly, tin oxide (often around 4%) plays an important role in all standard copper-red recipes. Without tin oxide, a copper red can still be formed in a gas kiln fired in reduction, but the copper red color is somewhat dull and undesirable in character. It is often mottled with green, as seen in figure 3a or 3b. As tin oxide is introduced to the glaze, up to 6%, the crystal field of the glaze changes, which results in a much more vibrant and desirable red. This may be taking place due to multiple effects, including crystal field effects and orbital splitting in copper, thus shifting the absorption band of the copper to transmit incredibly more vibrant red than that of copper without tin oxide. Again since tin oxide is an expensive ingredient, substituting Zircopax may be tempting; however, it will lead to loss of these vibrant colors and actually prevent a copper red from reducing, in which it stays somewhat green, as in 3b.

Ultimately, not all opacifiers are created equal in opacifying power and especially not in cost. Tin oxide has been traditionally used as an opacifier, but it holds so much value as a color modifier through crystal-field changes that it also exists in its own category as a colorant additive. At $30/pound for tin oxide and $5/pound for zirconium silicate, one could be tempted to substitute out all tin oxide for zirconium silicate, but doing so in chromium and copper glazes is disastrous.

When looking to replace ingredients in glazes, Zircopax is an acceptable replacement for tin oxide only for opacity. With that said, the substitution of tin oxide with Zircopax in effectively any red glaze is a recipe for disaster, disappointment, wasted buckets of glazes, and copious profanity.

the author Ryan Coppage is currently chemistry faculty at the University of Richmond. He teaches a Japanese Ceramics and Glaze Design class at the Visual Arts Center of Richmond and still makes far too many pots. To learn more, check out www.ryancoppage.com.