Appears in the March 2015 issue of Ceramics Monthly. 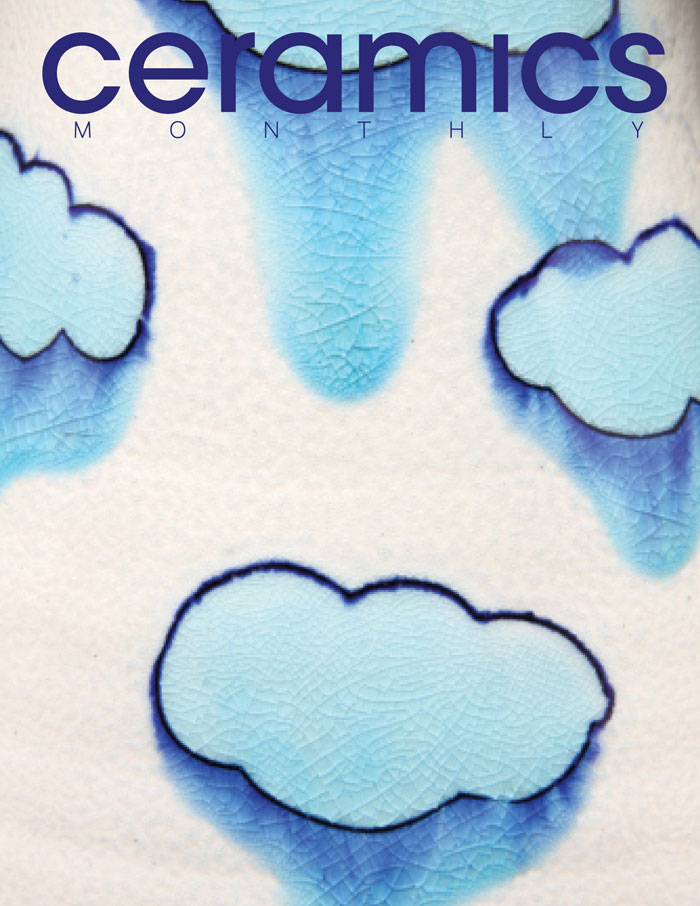 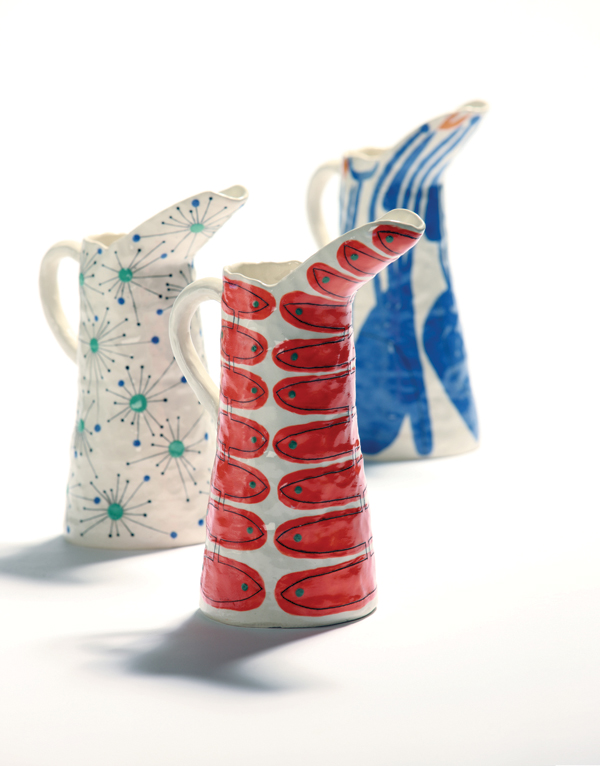 When I first encountered work by ceramic artist Andrew Ludick, one look at a row of his tumblers made me want to go outside and play. The predominately white, clean surfaces designed with brightly colored images inspired by fish, birds, cats, pine needles, roots, and flowers appeared both modern and carefree; a sort of mature whimsy. First thought? Picnics. Laughter. Summertime. Better yet, a little something to uplift a gray winter day. Second thought? Scavenger hunt. For surely, there’s even more to be found here, as the wobbling lines, atmospheric dots, and uneven surfaces suggest something can be discovered, even via indirect route. With a few strokes of thin black lines, Ludick seems able to evoke both creature and pattern, lifestyle and personality.

I found all of this quite interesting when I learned that his background is in fact not ceramics at all, but rather, illustration. As a BFA student at Columbus College of Art & Design, in Columbus, Ohio, Ludick did take one ceramics class and enjoyed it thoroughly. “I thought ceramics was something I would like to pursue,” recalls Ludick. “But I was in my third year as an illustration major, so a lot of my initial learning with clay really happened later on, from my wife Rosemarie and from experimenting.” 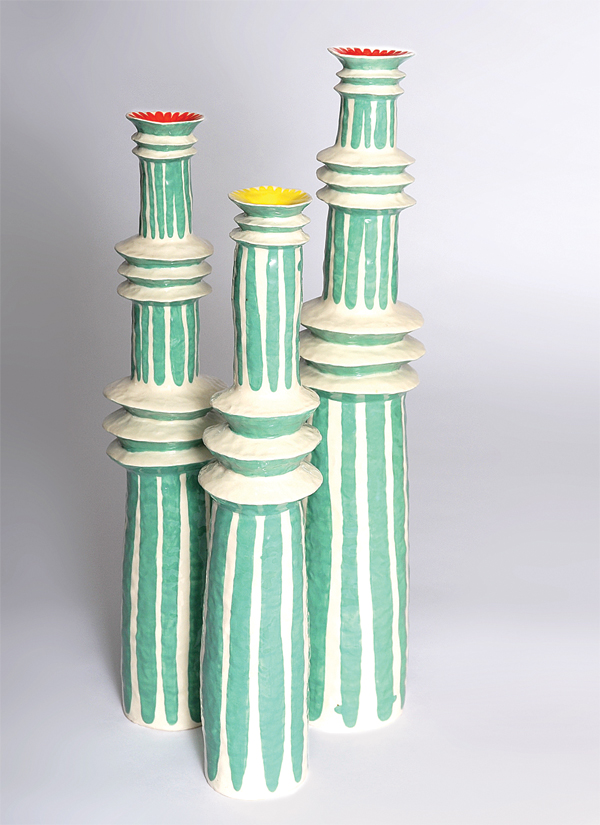 Originally from Ohio, Ludick moved to Ireland in 2003 to be with Rosemarie, of Rosemarie Durr Pottery, in Castlecomer. Today, the couple shares a workspace and showroom, balancing creative and business efforts with full lives parenting their two young children. “At first, I was doing work for Rosemarie in the workshop and I gained technical experience. I pugged clay for her, made balls, packed and unpacked kilns.” While he still kept sketchbooks for conceptual ideas and informal drawings, by and large he stopped painting. It wasn’t long before Ludick found himself drawn to the undecorated surfaces of pots waiting to be fired, and, in time, a voice all his own.

“I started making lines and paintings on very minimal ceramic work…After three or four years of making mainly slab-built and press-molded forms, I made a quick shift to coil building and pinching with white earthenware clay.” At this juncture, it seems, Ludick had learned enough about working in clay to free his creative process up for other considerations—namely, the beginnings of what are today seen as his signature designs and character-rich line quality. To my eye, it’s likewise no mistake that this transformation happened when Ludick began working in white earthenware, the blank white canvas of each piece surely triggering the illustrator within. “When I was painting, I felt that I always had to deal with certain subject matter and composition,” Ludick explains. “With ceramics, I found I could give this a break once in a while and just focus on patterns, broken patterns, radial patterns, and decorating forms with shapes. I think this allowed me to loosen up a bit and develop those shapes separate from composing them.”

As a result, a small but enchanting cache of imagery, color combinations, and patterns emerged; none so precise as to repeat itself exactly, but distinctly related all the same. Most pieces incorporate just one or two bright colors, predominately blue, green, purple, or black. “I’ve always been into Paul Klee’s work and his childlike drawing and forms, as well as his different ways of balancing,” says Ludick. Whether it’s tumblers, pitchers, mugs, trays, platters, vases, plates, or bowls (many of which double as wall hangings), each piece can stand alone or fit right in with any number of sibling pieces in Ludick’s line. Likewise inspired by folk art, Moroccan ceramics, and geometric patterns, many people have described Ludick’s imagery as flowers blooming, jellyfish patterns, or the sun’s rays. 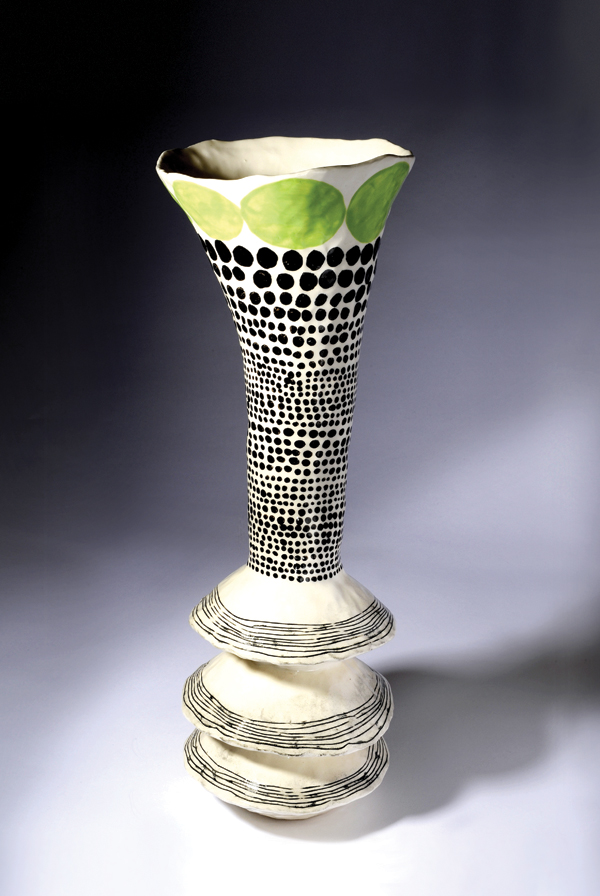 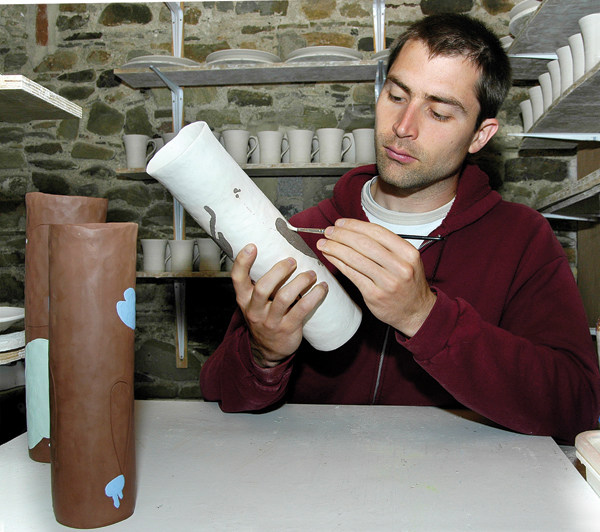 Along with Klee, Ludick, who has long been interested in abstract art and its history, cites Cézanne, Kandinsky, and Miro as Modernist influences. “Kandinsky and Klee created a lot of work using musical ideas or illustrating sound in their paintings,” says Ludick. “When I moved to Ireland, I was informally studying these ideas as well as learning to play music for myself. I had listened to a lot of old music and jazz but never really played. Now, I think my understanding and breaking up of geometric patterns has a lot to do with illustrating sound.”

By 2009, Ludick had his first solo exhibition and by 2013, he was contacted by Crate & Barrel. The American chain specializing in houseware accessories wanted to feature his fish design on a series of their platters and bowls. “I sent a few fish bowls for them to show to their manufacturer, but my main focus has been drawings and measurements,” says Ludick. “They worked with the designs I sent and had their own versions hand drawn by ceramic artists in Portugal, so the style is a little different.” The pieces are being manufactured for release as part of Crate & Barrel’s “Spring Range” in 2015.

But back to that creative leap to white earthenware, a leap that Ludick in large part credits to the influence of ceramic artist John Ffrench, who also pinches and coil builds with white earthenware. That inspiration, paired with Ludick’s newfound freedom away from the two-dimensional canvas, fueled his work. “When painting, the edges of a canvas are pretty straight and end abruptly. But in clay, my pieces are rounded and lead to other parts of the form, making you want to turn the piece and see everything from a different angle,” he explains. Indeed, that approach is how he often comes up with a starting point for a newly created creature—be it a fictional fish with fins that aren’t anatomically correct or a bird-like figure that could just as easily be perceived as something else. He tends to view each form as something that contains its own personality, letting inspiration and line lead the way from there. “I might make large, long lines on the length of the jugs and that could remind me of the belly of a whale,” says Ludick. “That won’t be intentional, but that idea might lead to something else that continues the theme. I might not give the whale a tail or eyes, for example, but I’ll carry on in my design with that sense of personality or animal in mind.” 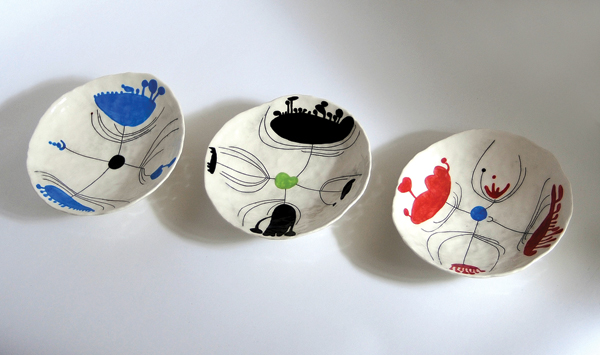 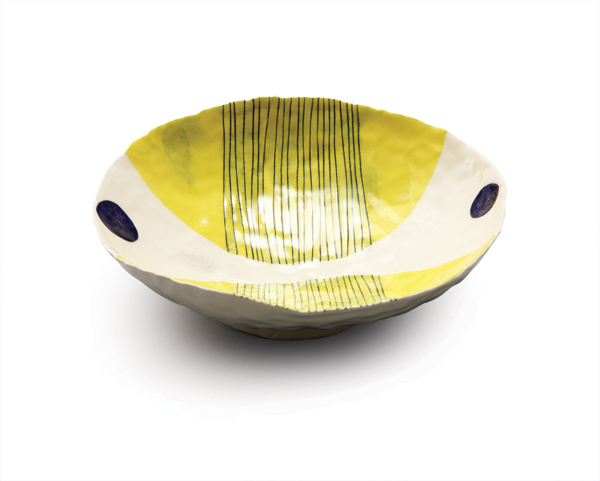 That said, the differences between painting and ceramics may not be the only source of Ludick’s leverage. The similarities between each art form likewise assist. For instance, there’s something to the meticulousness and pace of coil building and pinching in particular. Ludick finds the repetition meditative and alluring. Rather than a wheel spinning quickly in front of him, with handbuilding, each new moment presents the possibility of a new direction and the work moves slowly enough to perceive these possibilities. Much like a painting, one layer may completely cover or compliment the next, depending on which avenue the artist pursues. There are things to think about as he works, Ludick says, namely: “How am I going to save this form? How can I push this further? How am I going to come up with a design for this one?” Coil by coil, line by line, an answer materializes.

the author Katey Schultz is a frequent contributor to Ceramics Monthly and has written over 60 essays about artists and their creative processes. Her debut collection of short stories, Flashes of War, was awarded IndieFab Book of the Year and given a Gold Medal in Literary Fiction by the Military Writers Society of America. Learn more at www.kateyschultz.com. 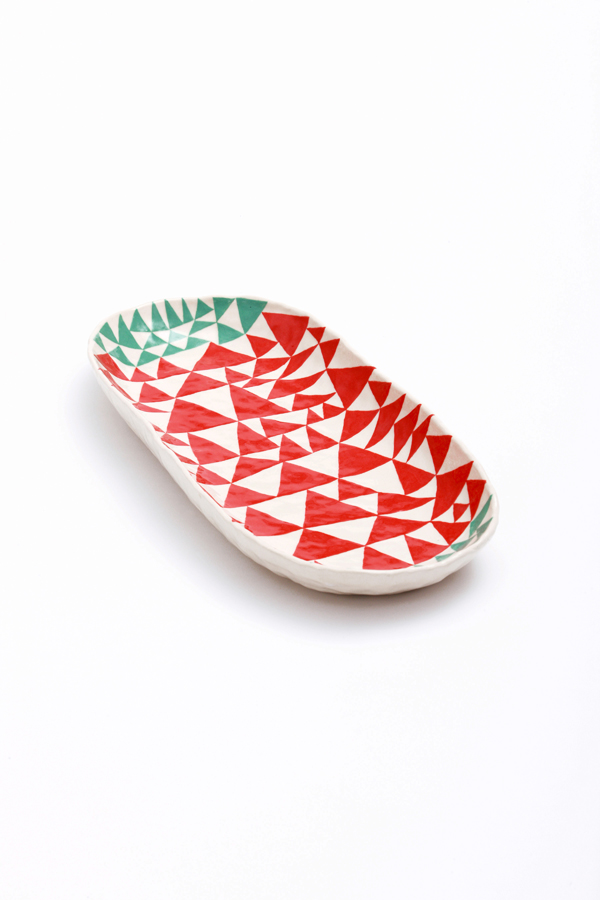 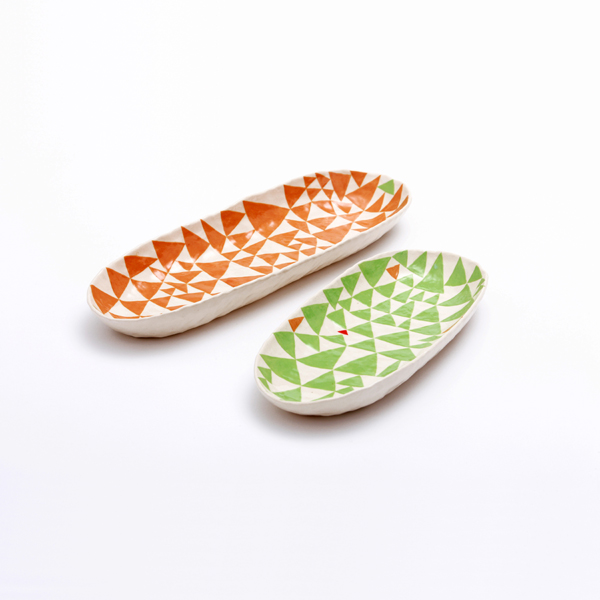 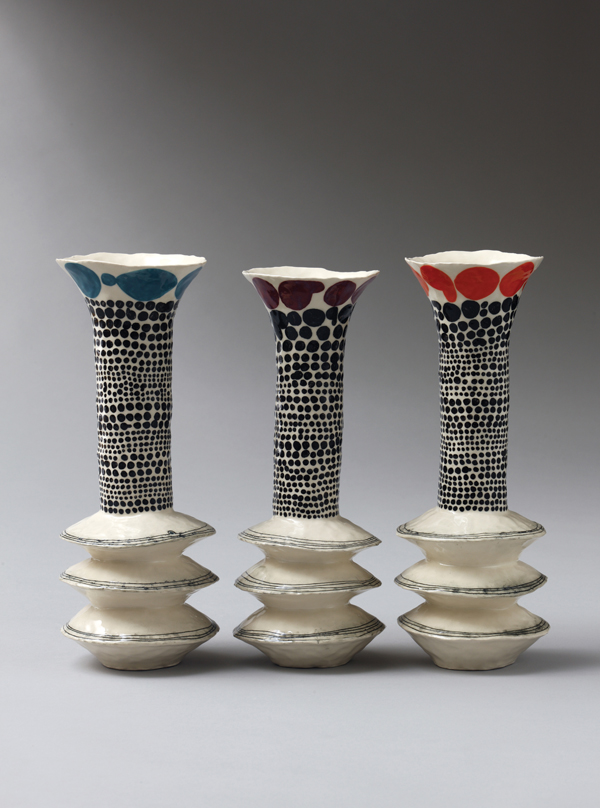 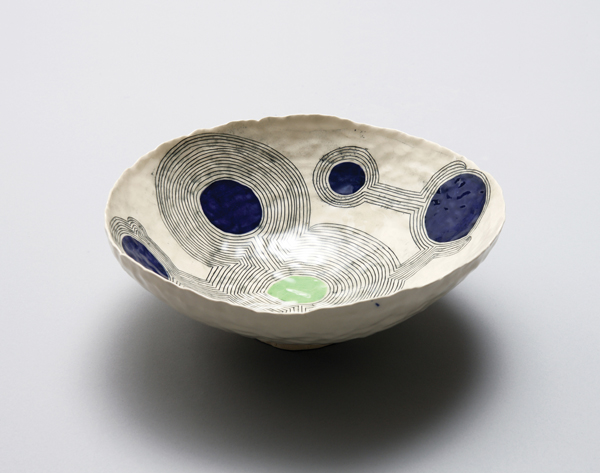 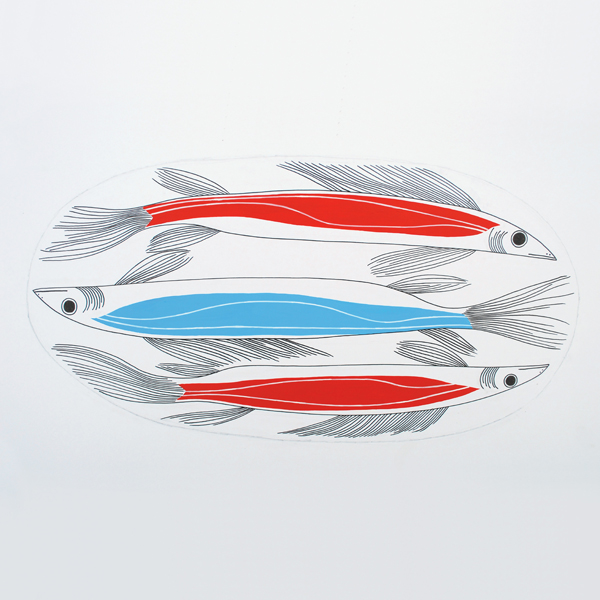 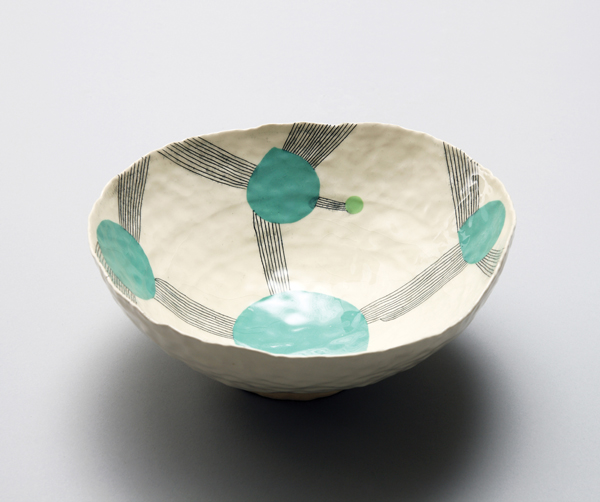 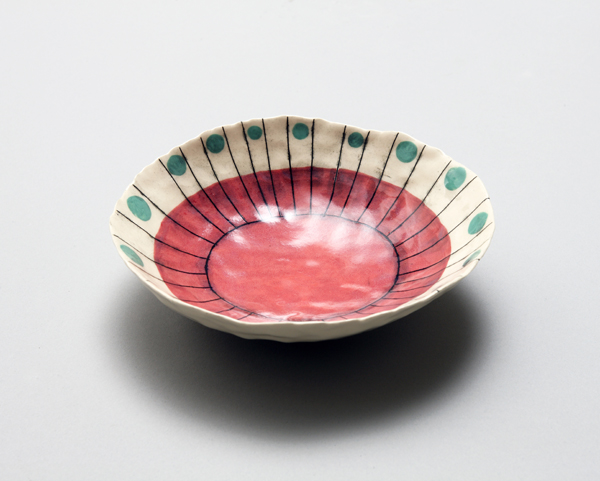 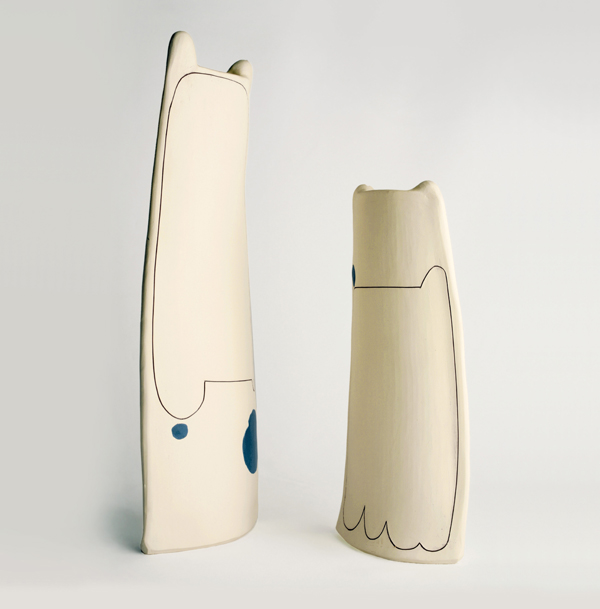 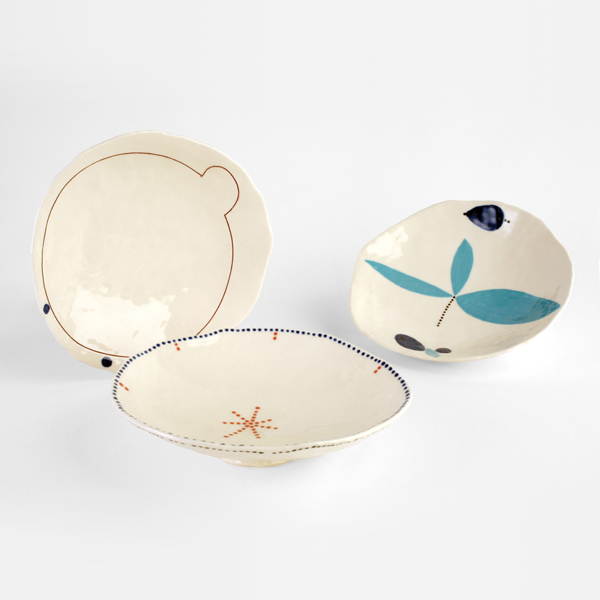 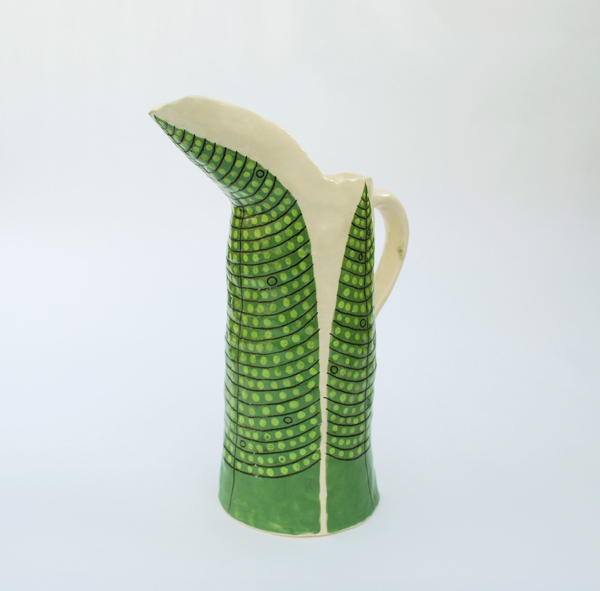 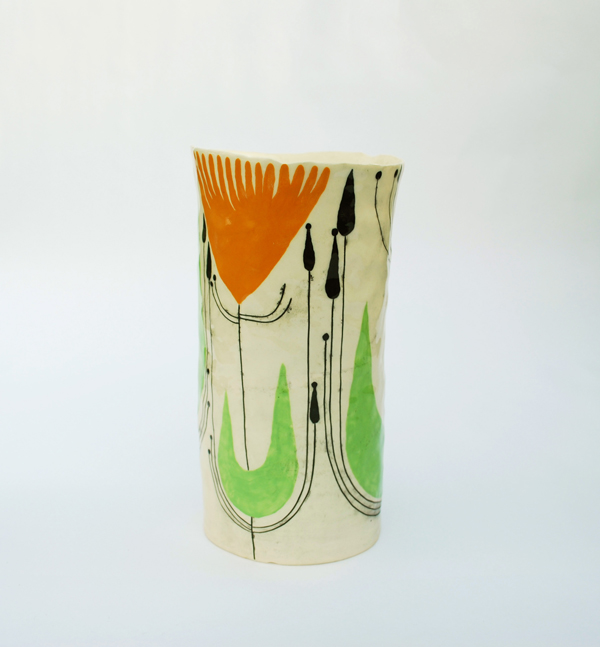 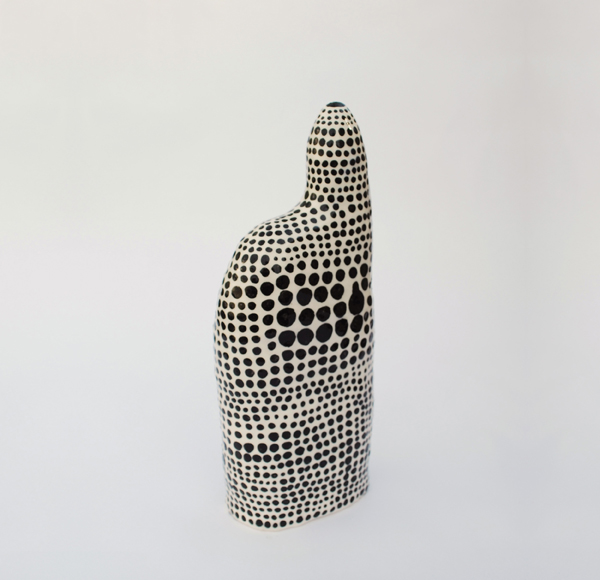