Appears in the May 2015 issue of Ceramics Monthly. 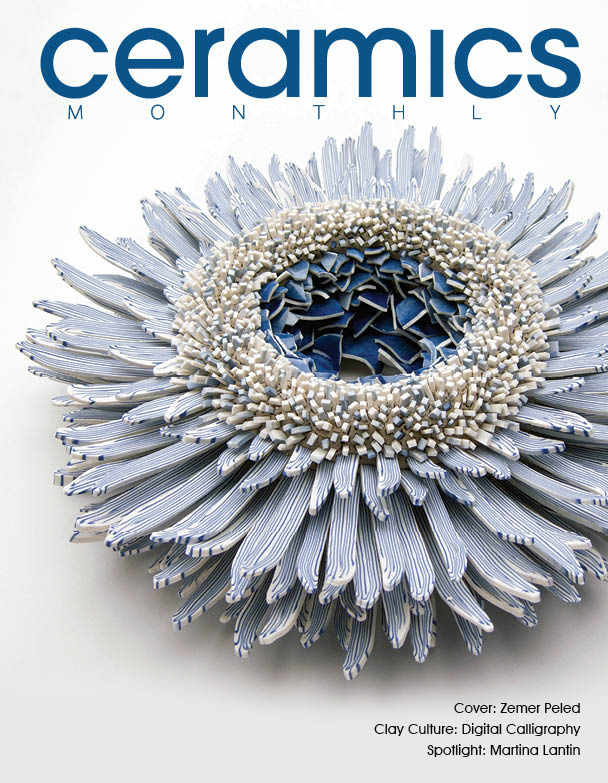 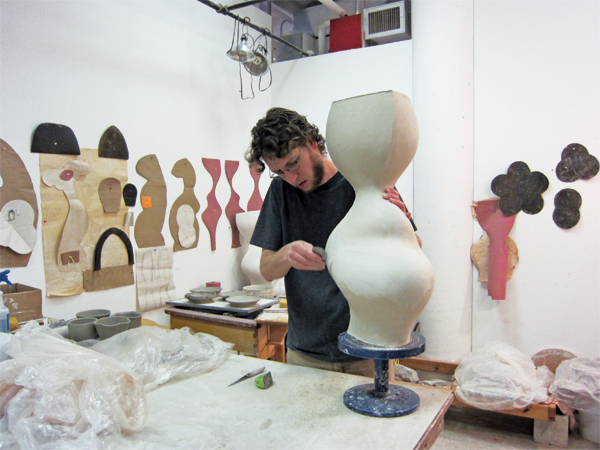 There’s a prevailing notion among authors that the act of writing is largely about applying structure to the imagination. Having gone through the foundational drafts of my first novel over the past year, nothing seems closer to the truth. As I sat down to interview ceramic artist Matt Kelleher—whose work I have followed for nearly a decade—it occurred to me that he, too, is applying structure to his imagination. Rather than fictional worlds, he’s making functional and sculptural ceramics; actual, tangible pieces that engage people in their homes and contain the unique stories of their making.

Whether it be a striking wooden bird glimpsed in a marketplace in China, a series of atmospheric J.M.W. Turner paintings on exhibit at the Tate Britain museum, or a week-long graduate-school workshop on movement and the human form—certain experiences mark Kelleher’s subconscious, coming together later in the form of three-dimensional ceramic work. When considered across time, it’s inspiring to see how Kelleher’s imagination works. Complemented by an emotional approach to studio practice, the end result is a striking body of new work that’s still distinctly in his voice, but more mature in concept and design.

“I’ve spent more time getting to know several aspects of the work,” Kelleher told me in his studio near Marshall, North Carolina. He and his wife Shoko Teruyama, also a ceramic artist, started a family here after completing their three-year residency at Penland School of Crafts in 2008. “Sometimes I think I am as moody as the weather,” Kelleher chuckles, “and it makes sense to me that the works of art I am most interested in have to do with landscape, skyscape, and atmosphere.” He shows me a digital photo of early morning mist lifting in sheets between row after row of Blue Ridge Mountains visible from his studio at 2600 feet. With a quick keystroke, another photo appears—this one of an ancient Japanese Zen painting. Nearly all white, with translucent, subtle, watered-down lines to indicate a village and distant mountain sifting between clouds, the image is as rich in everything it includes as in what it leaves out. “Sometimes I look at this,” Kelleher says, pointing to the single, dripping line of brown in the background of white that indicates a cliff, “and I think: If I could just draw a line like that, I’d be happy.” 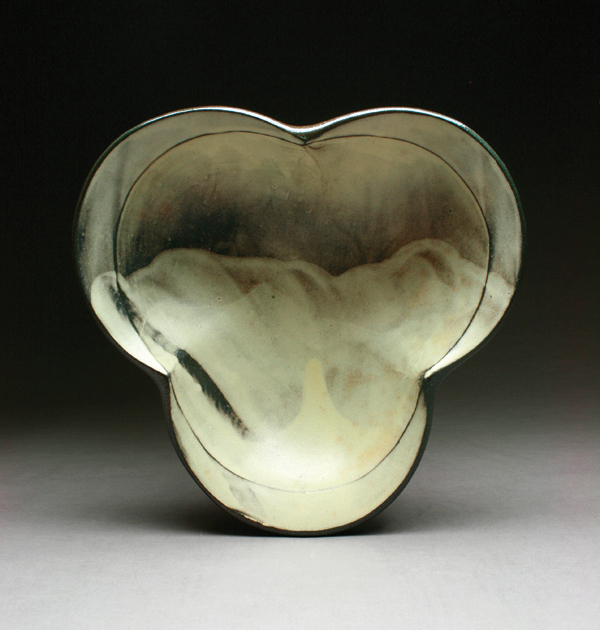 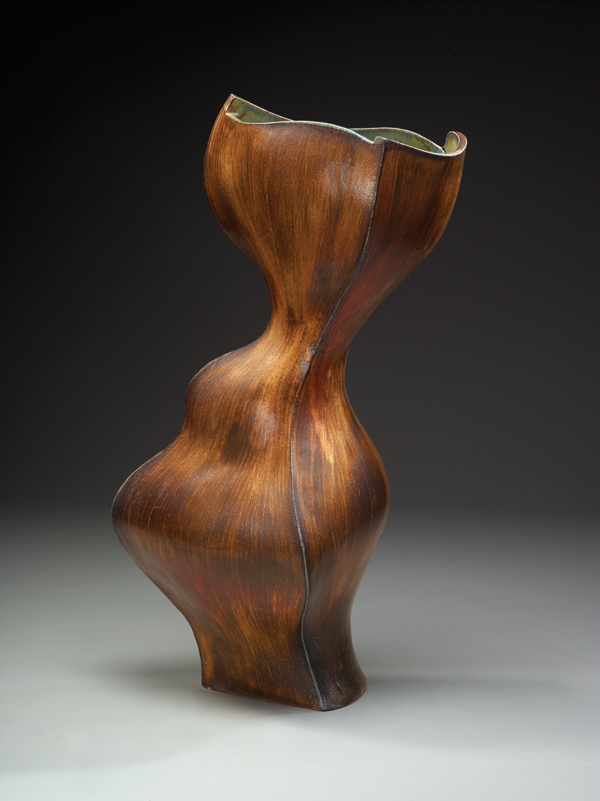 In addition to line quality and surfaces that evoke landscapes through soda-fired slips across slab-mold forms, Kelleher is deeply committed to mood and atmosphere. Seven years ago, he and I discussed his trademark trenchers, serving platters, and fry pans in this context. At that time, mood seemed genuine but occasionally elusive. Now, Kelleher explains, by studying painters such as William Kentridge, whose landscapes are sparse, desolate, and apocalyptic, “I realize that I want to create landscapes that are just as evocative, but with hope . . . . Living in the Blue Ridge Mountains, my mood is flirted with every day,” says Kelleher. “Fog flows down the river, blocking morning light before sun bakes it away and welcomes an afternoon thunderstorm rolling in from the mountains behind me . . . only to leave the mountain in front of me smoking into the evening. The constant change always hides, then reveals—and that communicates hope.”

To this end, Kelleher started using a high-iron clay body that fires to a mid-range temperature of cone 3 and burns through a lot of the slips, leaving echoes of deep gray. Picking up a new, clover-shaped serving dish, I notice immediately the heft and stability of the work. Interior and exterior edges complicate the form, allowing more opportunities for bold line breaks, pooling, or drips in the slips. “I think I leave a lot of information for people to pick up on when they use these pieces,” Kelleher explains. “There are lots of tool marks and differences in thickness. To me, the surface is more like a painting and the form is like a sculpture.” The weight feels reassuring, as though whatever is offered in this particular dish will always be replenished. That, combined with an overall, lighter palette and a hopeful mood, yields a feeling of abundance and renewal.

Kelleher has explored abundance through other forms as well, most notably his sculptural bird forms that range from 13–26 inches in length and can be placed outdoors, indoors, or wall-mounted. Some are speckled and mottled, appearing to blend with the natural world, while others appear dressed in slick ebony, a notable change for the artist. “When I moved to North Carolina, I looked around at the state and its history with pottery and the storage jar form stuck out,” recalls Kelleher. “I think people want these jars around them because it touches on security. . . . The jar is familiar and nostalgic and I got stuck at the question: What do I have to offer to the history of the jar?”

One would not immediately think that jars lead to birds. But, as Kelleher’s imagination distilled peak experiences in his life as an artist, that’s exactly what happened. While designing a lid for his trademark fry-pan bowls, he had an epiphany: “As soon as I drew the lid, the handle of the fry pan appeared as the tail to that wooden bird [I saw at the market] in Beijing years beforehand.” Through working with the form both large and small, as well as intricate surface designs added by Teruyama or atmospheric moods created by his slips, Kelleher was able to realize his intentions behind the structure. “The birds are currently my best interpretation of the North Carolina jar,” he says, adding that while birds can often appear as cliché motifs or imply overused themes of freedom, his birds always appear still and calm. Indeed, they are grounded and full, as comforting as a jar filled with a garden harvest. 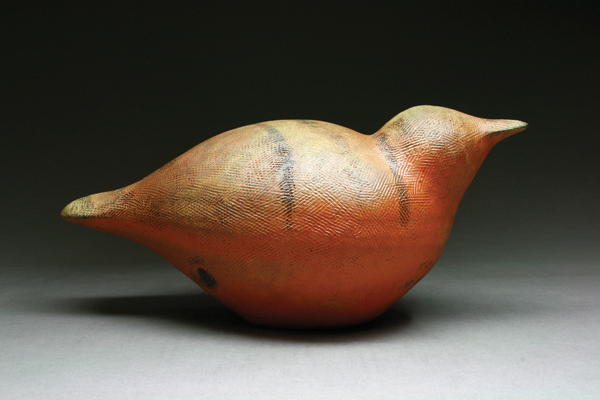 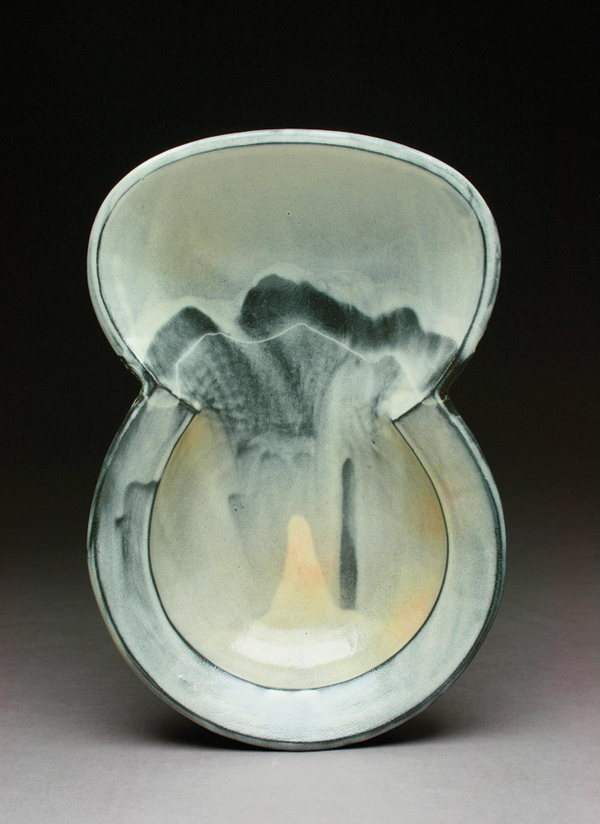 Through a series of cumulative, coincidental, and subconscious impressions, Kelleher found his way not only to a lasting contribution to the history of making, but also toward an ethic of best practices for his studio approach. Here’s where the emotion comes in, or perhaps more accurately—the practice of becoming comfortable with the unknown. “I’m much more wiling to let things not fit nowadays,” he states. “I’m trusting that, one day, it will all come back together. I want the work to grow and I’m really allowing myself to do things that might not work out. Ideas are moving slower, but there are more of them.” In addition to the visual artists he studies for mood, Kelleher marvels at established artists such as Tom Spleth, who paints, slip-casts porcelain profanity cups, and works on large-scale sculptural vase forms, among other things. “I’m intrigued by how all of that fits together for Tom,” says Kelleher, “and I enjoy seeing how audiences engage with my different bodies of work as well. I can learn from that, and I’m constantly looking at that feedback and cohesiveness to push myself further.”

This new learning has created an opportunity for Kelleher to pursue an additional sculptural form in depth: a series of slab vases and slender, tall, closed forms, each reminiscent of the human body. Whether evoking a dancer in motion, a couple in intimate gesture, or an argument between friends, these pieces are undeniably provocative. What begins as a paper cut-out drawing, becomes a series of slabs that are stitched together and given volume into single or paired forms that can be displayed as declarative statements or moveable pieces in changing conversation. At first glance, the work may seem a distant relative to Kelleher’s burnished orange, creamy brown, and blue-dot marked serving dishes and platters. But a deeper look reveals a truer structure for what his imagination was after all along: something that captures humanity’s shifting moods of appreciation and hope, withholding and complexity. In other words, work that mirrors our experiences as we engage with the world directly and indirectly, our impressions at once memorable and fleeting, not unlike the clouds that rise and fall around his mountain home with each passing day. 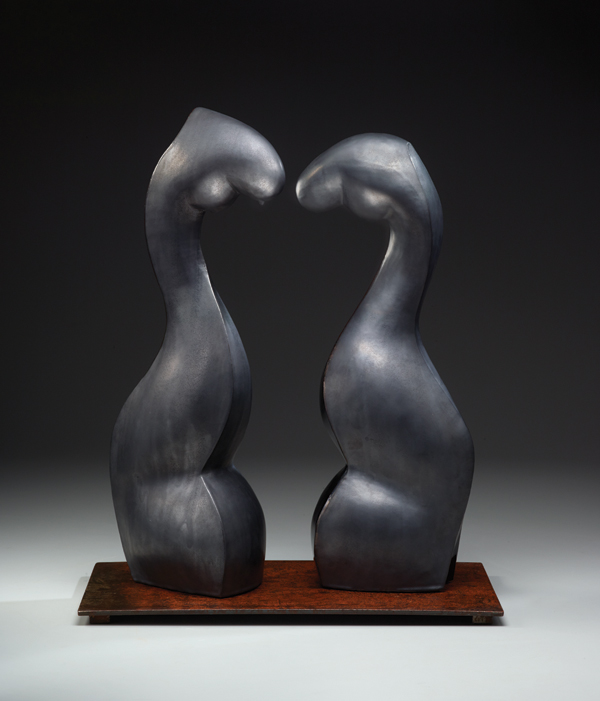 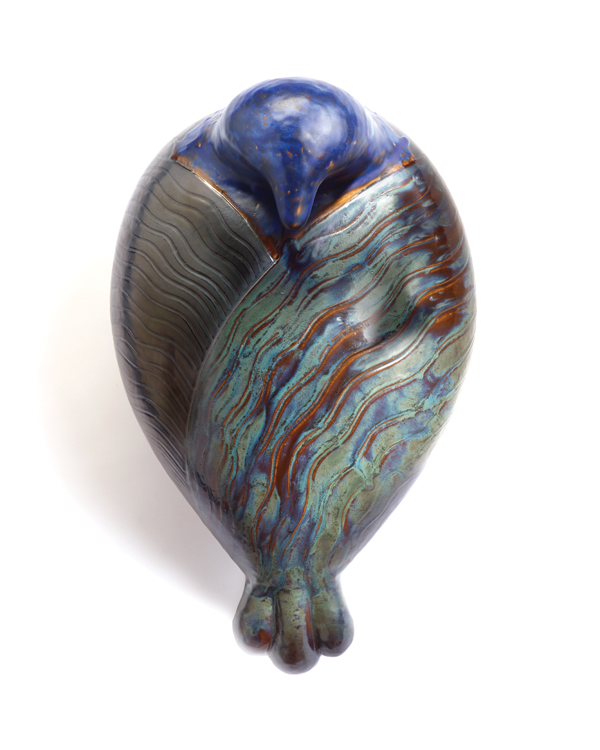 Katey Schultz is the author of Flashes of War, an award-winning collection of short stories featuring characters impacted by the wars in Iraq and Afghanistan. She specializes in essays on the creative process and has interviewed more than 60 artists across the US. See more at www.kateyschultz.com.