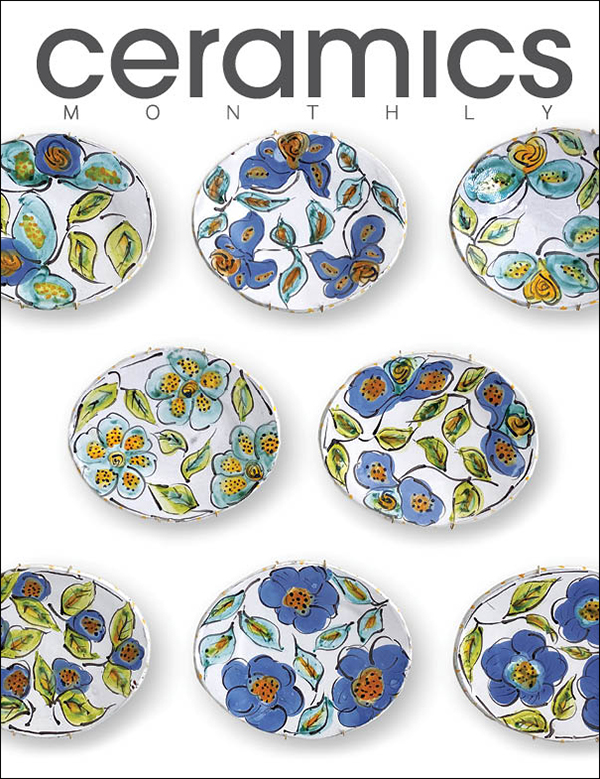 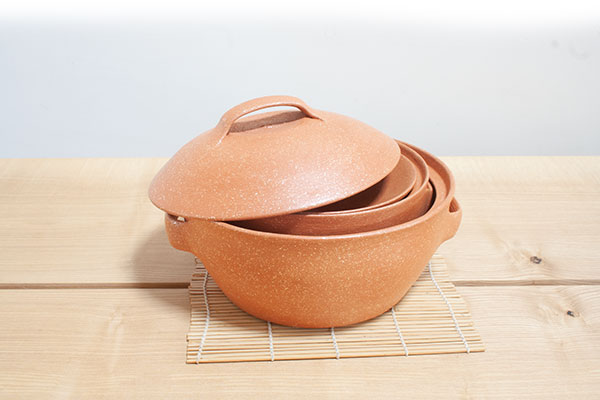 Studying ceramics has always been an excuse for me to escape into other cultures, time zones, and mythologies. Much like vernacular architecture, domestic ceramics offers the opportunity to peer into the shape of other people’s daily lives, through both the most showy and boastful aspects of taste and artistic prowess (or access to it) and the intimate and treasured, unaffected expressions of the basics—eating and relaxing, living and dying alongside family and the natural world. It is the latter of these two categories that interests me the most.

Making ceramics, on the other hand, has been an opportunity to access the aspects of meditation and discipline that working with clay readily offered me from the beginning. I find it very hard to make anything worth firing without being focused and present at every stage. There’s a big difference between a careless mistake and an unguarded expression of movement and energy, and I find my best pots are made when I’m softly but intently focused on what I’m doing.

Clay makes the perfect material to record what can be called present-moment awareness, and in my experience this can be most easily found in functional, domestic pottery. These are pots made without high aspirations, by both fluent and beginner hands that are not expecting to be judged. They are made to suit the present moment, and are often decorated with scenes or inspired by forms from the immediate surrounding environment. They are born out of a need (utilitarian and/or ceremonial), but have the time to be playful, or the confidence to be plain. Despite often being thousands of years old, they can seem both entirely familiar and comprehensible, and inexplicably ethereal at the same time. I scour museums and books for this tension, and never get tired of finding it. It’s something to aspire to, and the main thing that keeps me making.

For the past 10 years, I’ve been making functional pottery on the wheel. I was trained in production throwing, and have spent most of my time throwing tableware. My former teacher Andrew Crouch throws stoneware and reduction fires in an oil kiln, making an achingly beautiful range of forms that are mainly inspired by Korean, Minoan, British, and Chinese forms. His processes and aesthetic are so concluded and so strong that I’ve found it very hard to break away, and it’s taken a few years to feel like I’ve gotten anywhere. Moving away from glaze has been a big breakthrough, and the clay that’s allowed me to do that, while keeping the work functional, is a body from Potclays here in the UK.

Finding this clay seemed a little fateful. I’d been searching the internet for more examples of decorated Mimbres bowls and Pueblo water jars from New Mexico, and through my search stumbled across the work and career of Felipe Ortega. Ortega was a potter of part Apache descent who had learned his craft from an elderly Jicarilla Apache woman and had made coil-built cooking pots all his life. He was a much loved character and made the most beautiful pots—I encourage anyone and everyone to Google him. Ortega developed a recipe, now made by Potclays, that reproduces the naturally dug micaceous clay that can be found in certain areas spanning North America, from California to Georgia. In Ortega’s own words, talking about the original clay: “This clay is a primary clay body which means that it is found at the same place where the clay was created. The telltale mark that announces the presence of micaceous clay is the abundance of quartz and feldspar. Mica in the clay body acts as a temper and also gives the clay body an insulating capacity. The chemical composition of the clay is primarily illite, smectite, muscovite, sericite, kaolinite, and bentonite. The clay vitrifies at a relatively low temperature of about 1300° Fahrenheit. The clay is extremely plastic for being a primary clay and is rather hardy.”¹

It is the white mica (muscovite) that really sets this clay apart, aiding thermal resistance and enhancing the ability to insulate. It means that pots made from this clay can go over an open flame, an electric hob, or in an oven. I purchased a couple of bags straight away, and have been hooked ever since. 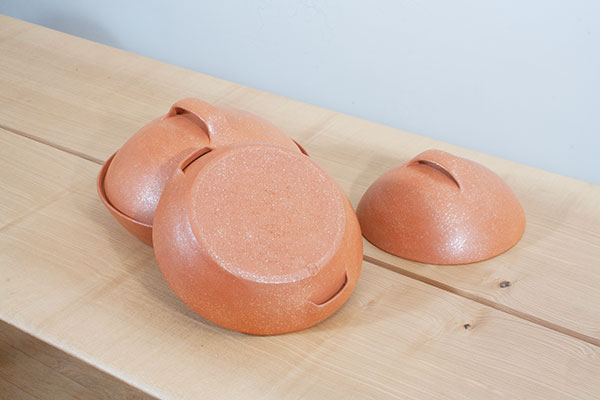 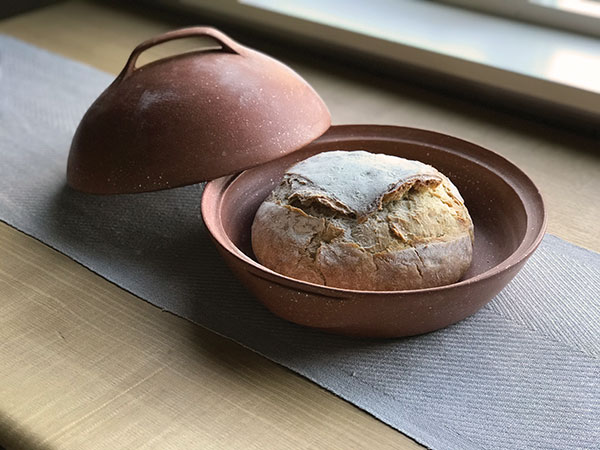 As a dyed-in-the-wool production potter, I wanted to make something that I could repeat and that would get used. In 2017, I had a studio above a café in London and the chef was baking sourdough in a large, but not steam-injected, oven. She used lots of iron cooking pots in order to keep the dough moist and talked me through why this was important. I realized I could make what she needed, and that they would be half the weight, too. So, my bread cloche was born. I made a few more in London and then had to pause production between 2018–2020 until I found another studio for myself where I could freely use the clay. In February of this year, I moved into a new workshop and production resumed pretty swiftly, and just in time for the lock-down sourdough craze. I’m now making cooking pots too, and have one at home that I use on my hob and wood-burning stove to cook stews.

I get a lot of satisfaction from making the cloches, and have really enjoyed getting to know the clay. I wanted my design to be as elemental as its function—it’s a bread-shaped cavity for baking bread. It follows traditional British chicken bricks and roasting pans—naturalism meets utility. The forms, the handles, and the making process have all arisen in service of the end goal, which is baking delicious bread at home. There is no decoration other than the shimmering shards of muscovite and the warmth of the bare clay.

“Mother Earth may I dig from your belly the clay with which you and I will fashion vessels for the use of our people for our food. We thank you that you have given to us abundantly and may we also give abundantly to all our brothers and sisters.”—Jicarilla Apache prayer for digging clay.² 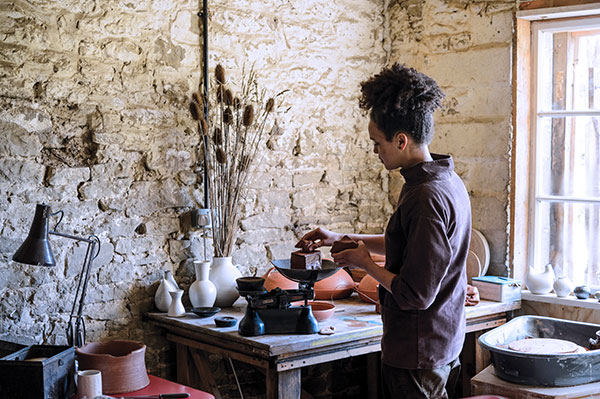 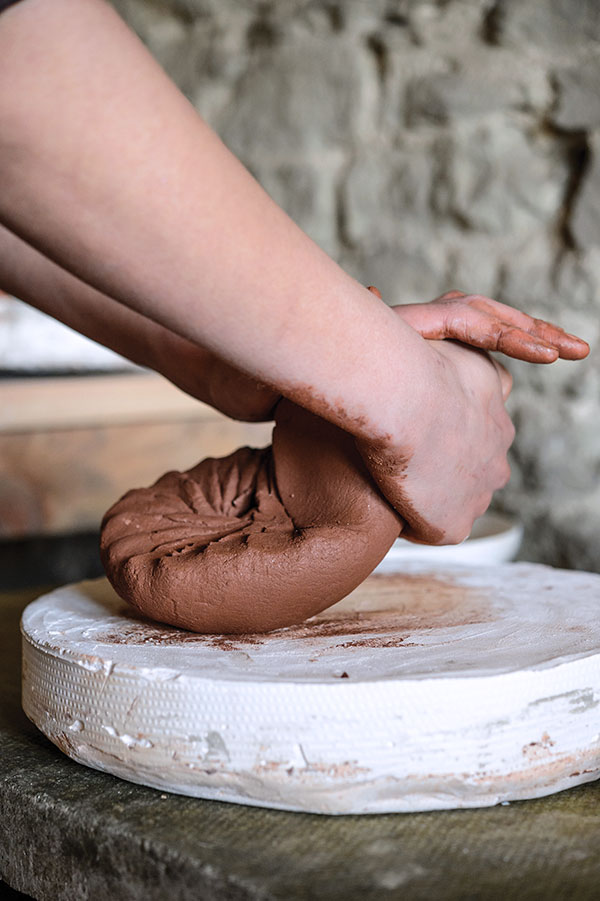 Weighing out the clay first is important to ensure consistency of form (1). The next step is wedging the clay—I do this for every piece, even if the clay has been pugged. The clay can be a little stubborn and quickly gets tired, so it’s a good idea to prepare the clay properly (2).

I throw the cloches on bats to avoid distortion while being lifted off the wheel. Creating concentric clay rings on the wheel head allows me to fix the bat down temporarily (3). 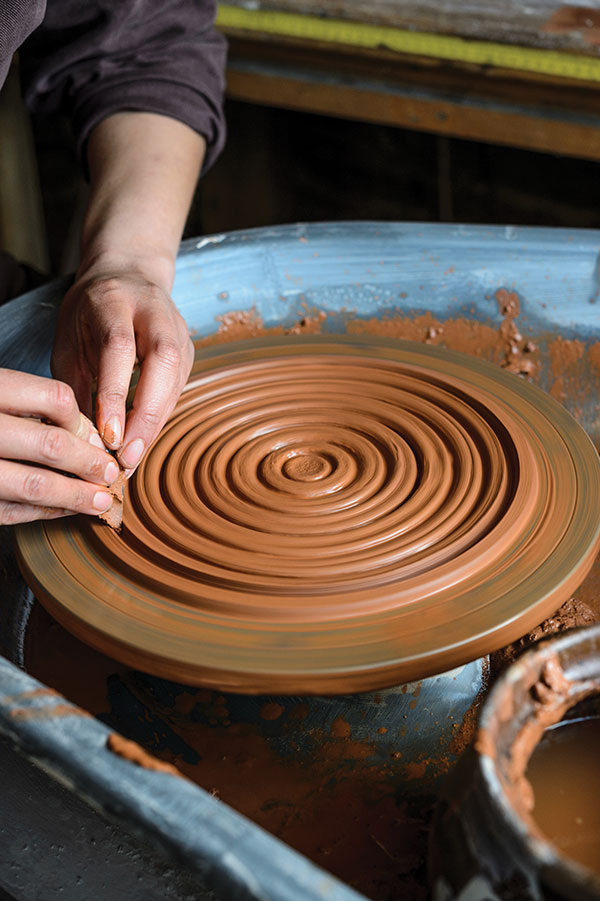 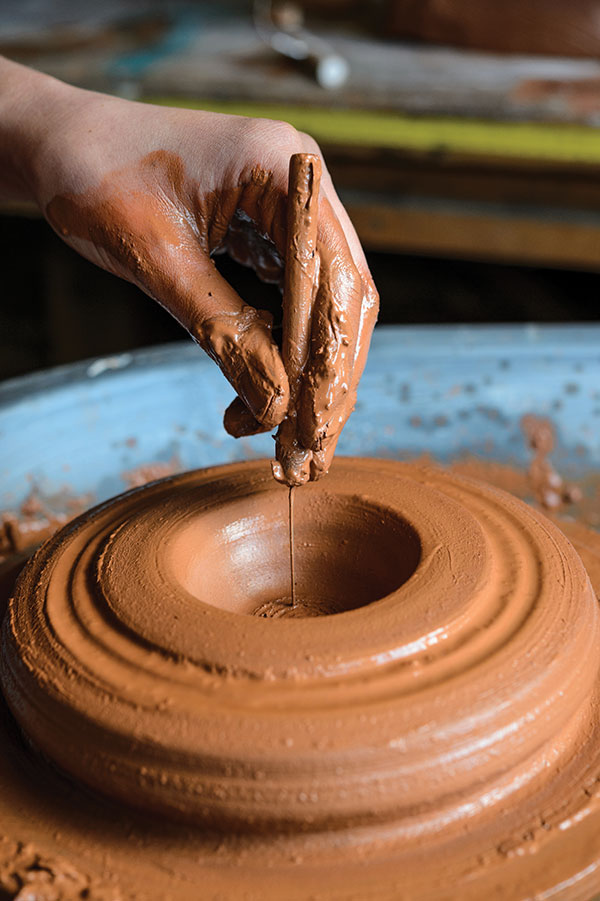 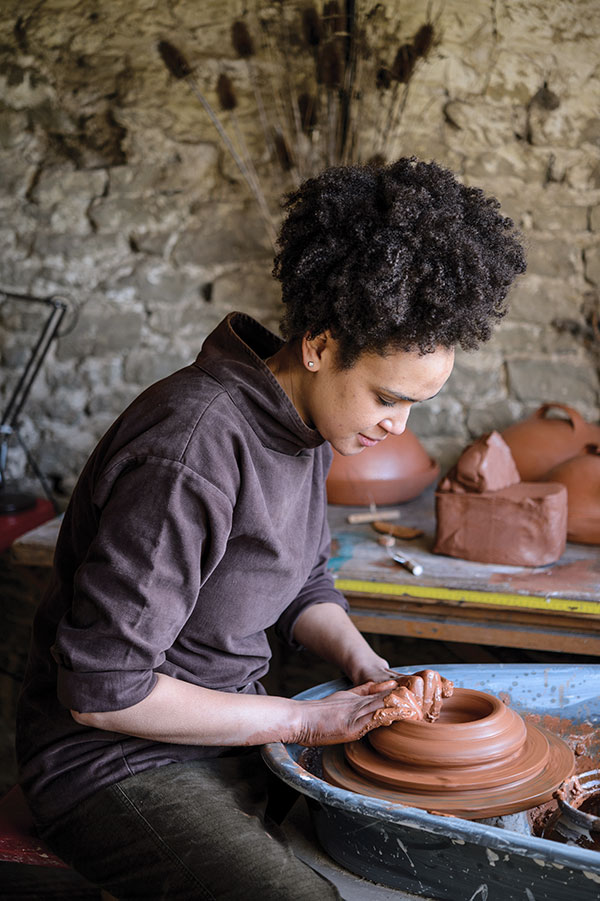 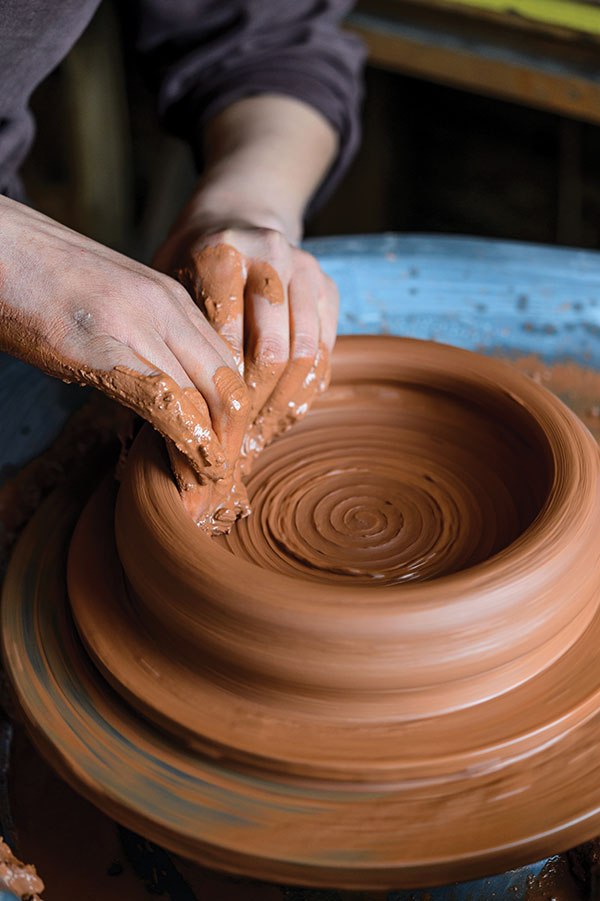 Begin by throwing the cloche bases first. I always check the depth of the base with a needle (4) because when first developing this design, cracks formed in many of the cloches, which was partly due to my bases being too thick compared to the walls. This caused uneven drying and shrinkage, resulting in cracks.

The larger of the two cloche sizes I make has a diameter of up to 12½ in. (32 cm), so being careful with widening the opening in the clay while throwing is really important (5). I take my time and compress the base with my fingers a lot as I go (6).

Next, create a ledge or gallery on the inside wall for the lid to sit on. I begin forming this profile early on and then refine it with a square-edged tool later (7). Immediately after throwing is complete, I cut the base from the bat, which really helps to minimize cracking, and then leave it to dry to leather hard (8). 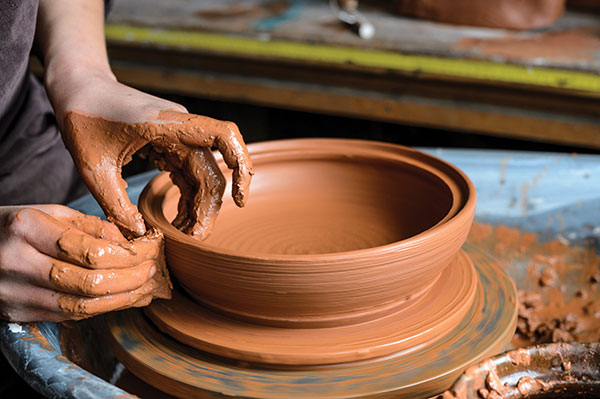 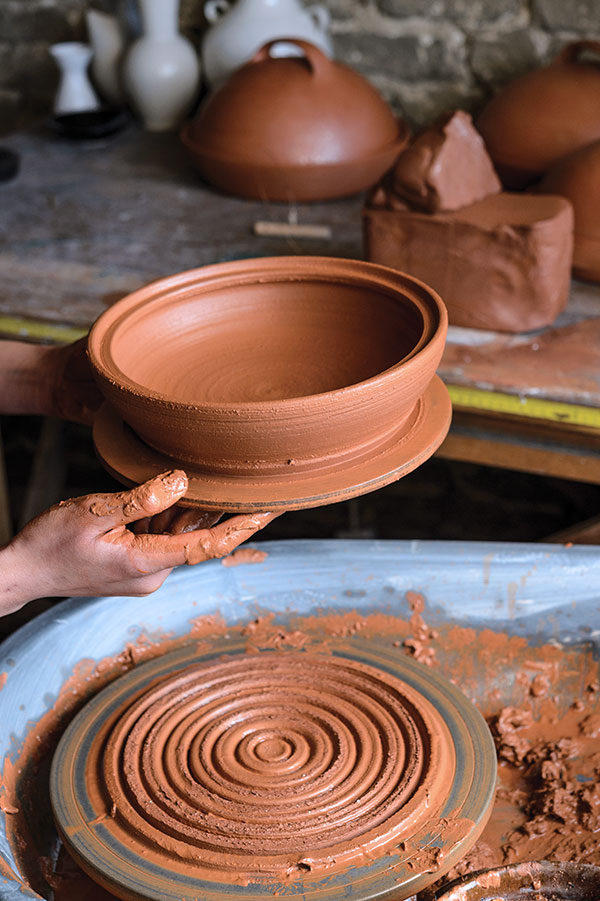 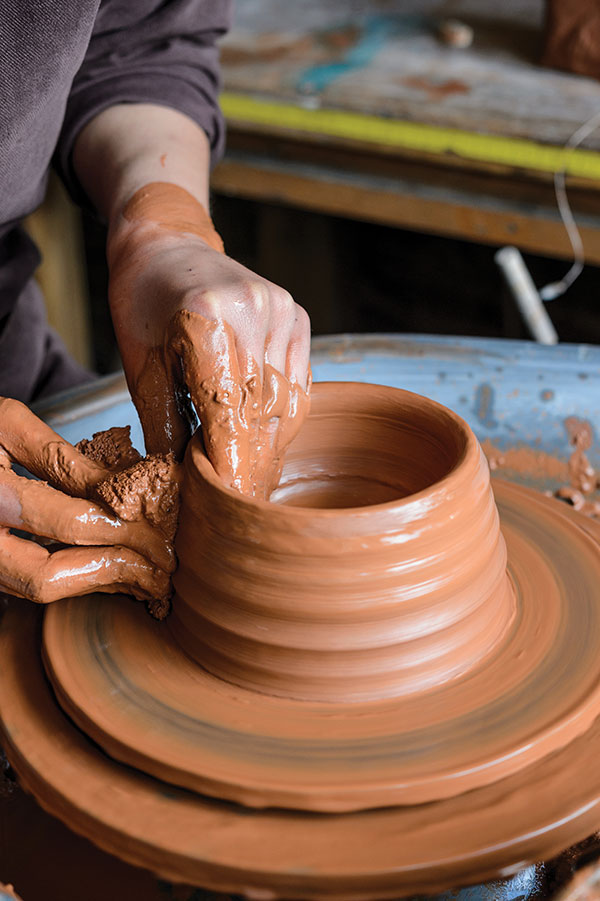 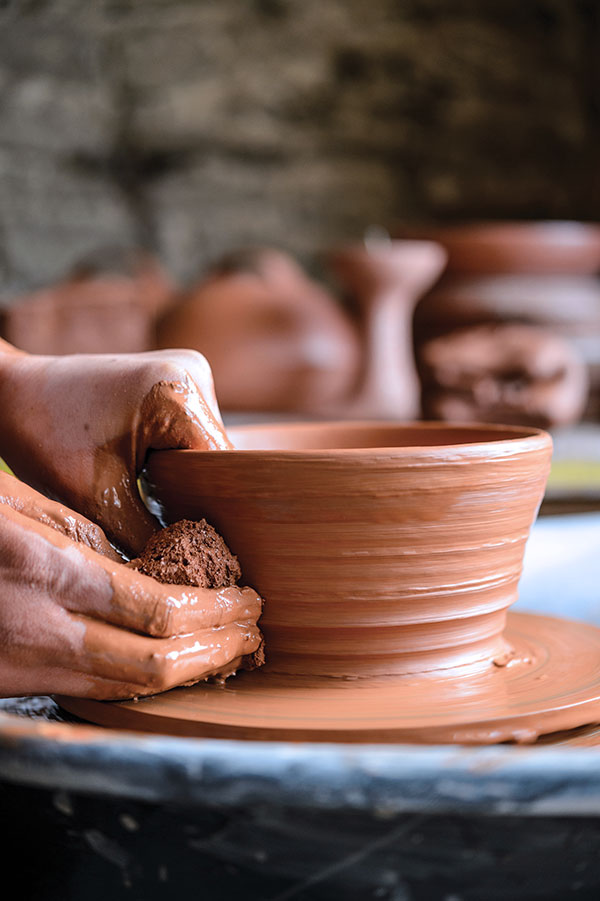 Next, make the matching lid. Getting the lids to fit the bases can be a bit of a complicated task. Making them successively, right after throwing the base, lessens the chance of shrinkage miscalculations later on. The lid is simply thrown as a bowl and trimmed later to a smooth dome with no foot ring. I begin bowl forms by throwing a flared cone shape, and then gradually bellying it out (9, 10). Getting the lids to accurately fit the bases is a matter of millimeters and requires lots of checking with calipers to compare the diameter of the lid to the diameter of the gallery ledge (11).

I pull two handles for each base and one larger one for the lid (12). After the pieces have been trimmed and the handles have been attached, they’re left to dry out completely.

Once I’m sure they’re bone dry, I sand both the lid and body of the cloche with two grits of sandpaper until the surface is beautifully matte and smooth (13). Next, I lightly burnish them with a thick, sieved slip of the same clay. I use a dry sponge to burnish and work my way quickly around the pots.

It is essential that everything dries completely because micaceous clay has a tendency to blow up in the firing if it’s not dry. I fire in an electric kiln, start heating slowly, and go up to cone 08 (14). 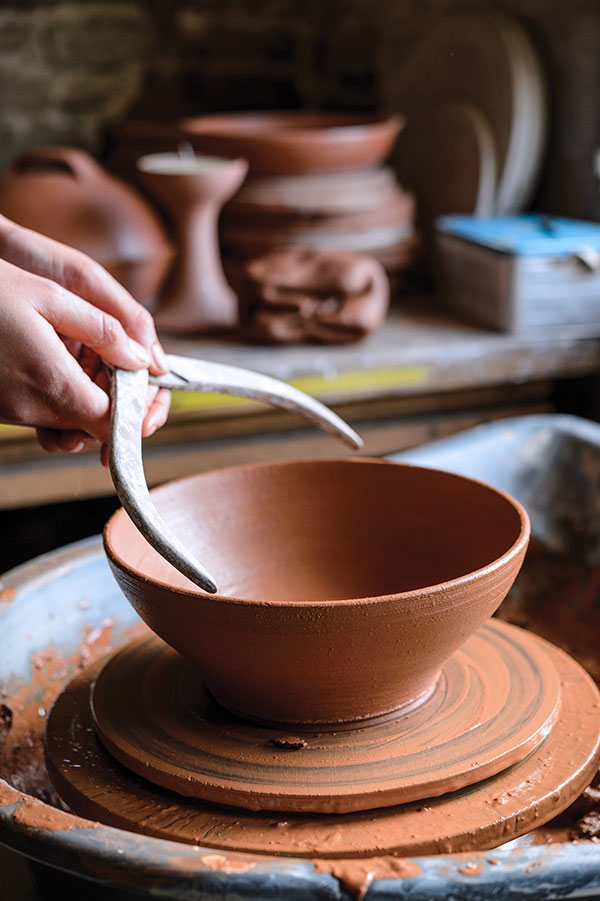 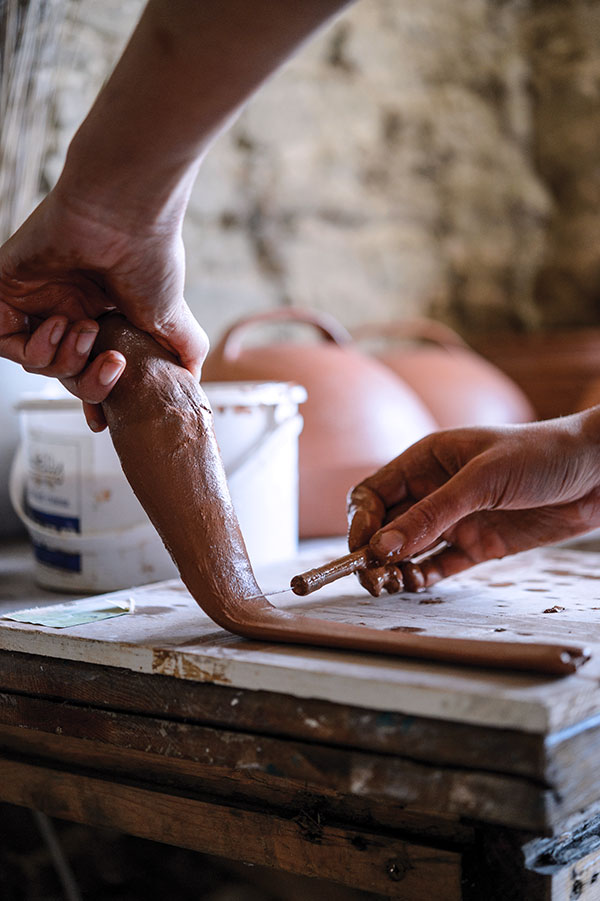 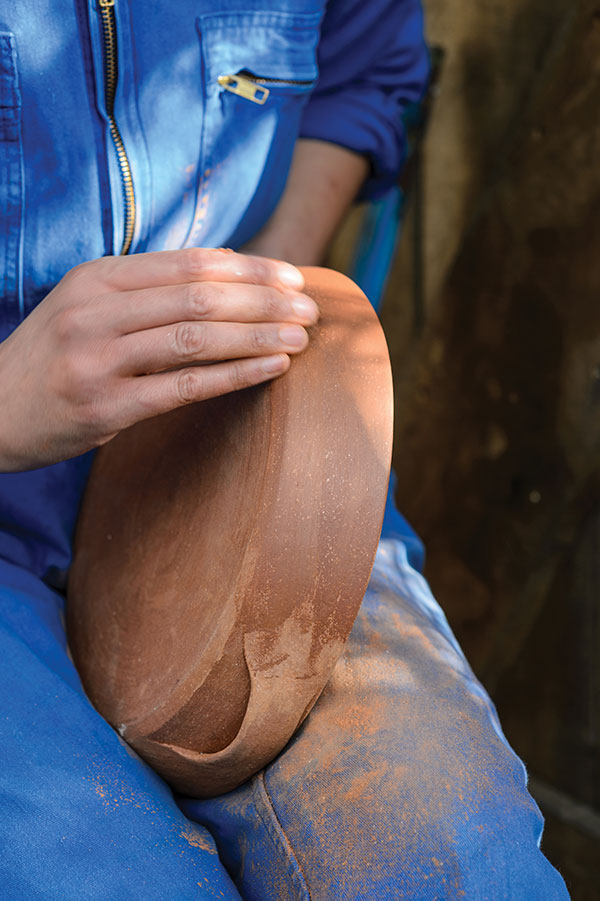 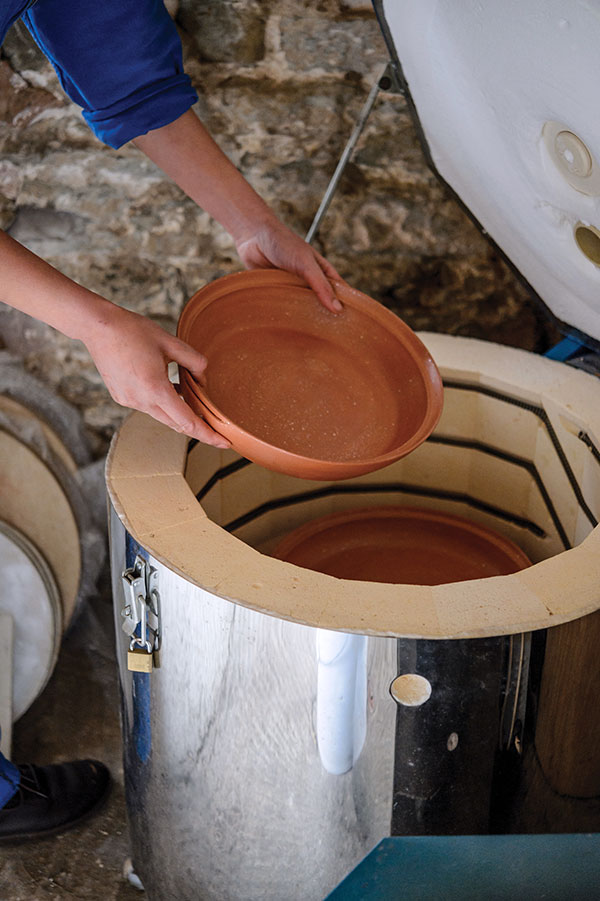 the author Isatu Hyde is a full-time potter and designer living and working in Shropshire, UK. She apprenticed with Andrew Crouch at The Marches Pottery in Ludlow, Shropshire. To learn more, visit www.isatuhyde.comor follow her on Instagram @isatuhyde.