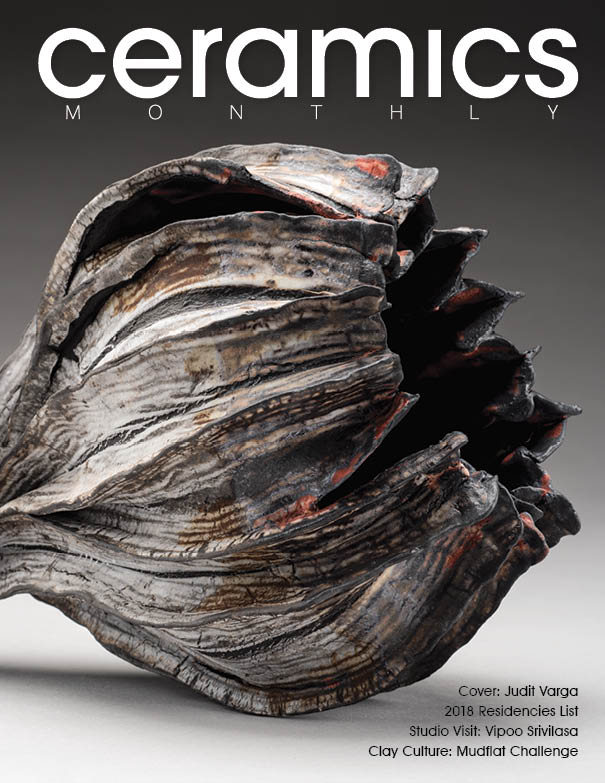 I met Ricardo Campos and his wife Rosa Rosell at a potters market in Bandol, France. I was immediately struck by the unique quality of his pieces and the finishing technique that he used. I had never seen anything like this and could not figure out how he was getting the results. I visited his studio in Spain to learn this specific technique that he developed for his unique work.

Inspired by a Wood-Fired Surface Effect

Campos studied at the Artesy Afficios de Granada and Rosa Rosell went to Escuela de la Bisbal. La Bisbal d’Empordà, Spain, was a pottery manufacturing town, similar to Vallauris, France, and was noted for its wood-fired black functional pottery. Campos loved the places where the wood ash caused flashing on the pieces, and wanted to get that effect in a controlled manner. He tried many ways to get the flashing in a reduction atmosphere to avoid the time and expense of wood firing. 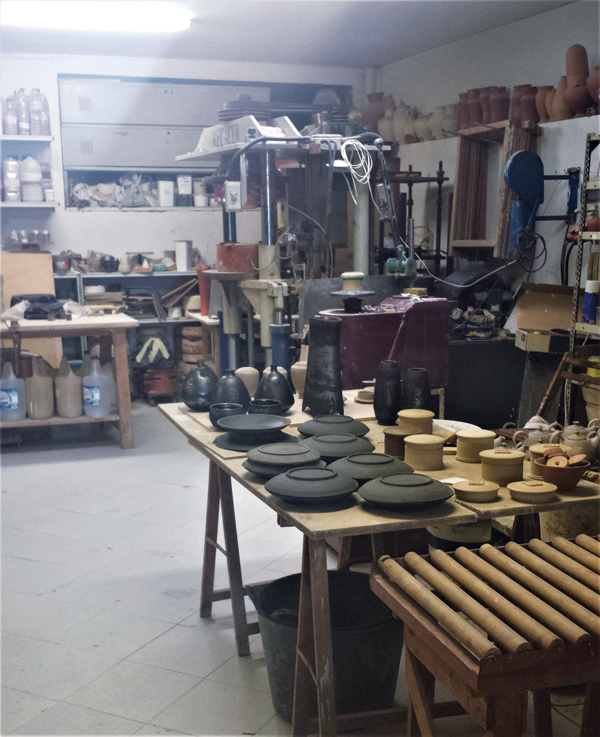 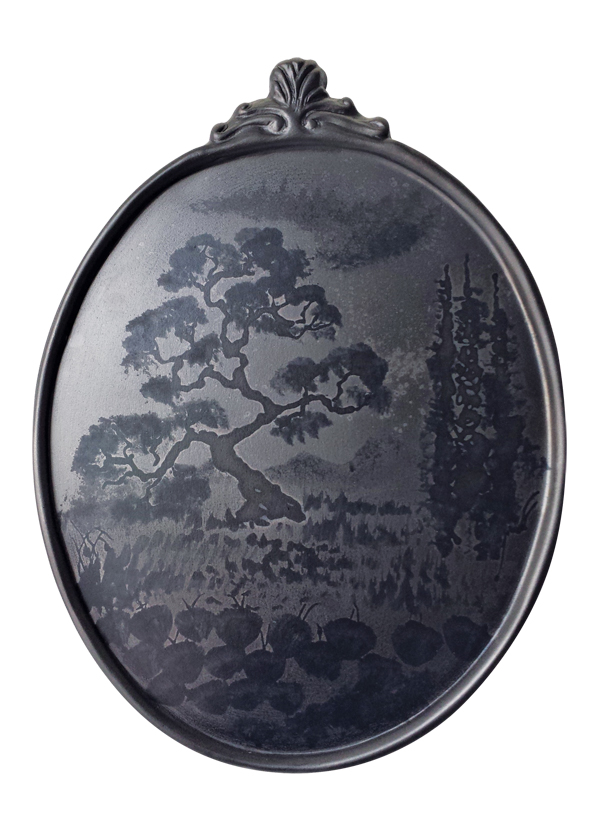 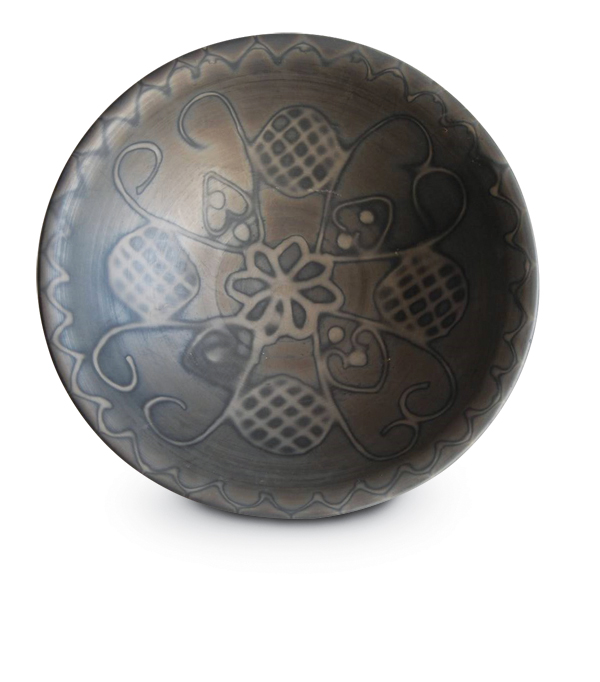 Eventually he developed a process where he coats forms made using local red earthenware from La Bispal with a refractory slip made from talc, kaolin, alumina, and silica. The talc adds fine particles, helping the engobe to form a tighter resist layer, the kaolin brings plasticity, needed for application of the engobe, and the alumina is the primary refractory, keeping the engobe from fusing to the clay body.

This engobe acts as a resist, preventing carbon from the reduction atmosphere from absorbing into the clay body, allowing Campos to control the carbon-trap effects. After the firing, the refractory slip can be removed as it does not fuse to the surface.

Campos first applies a red terra sigillata to cover the piece. Then he paints or slip trails decoration or imagery using the refractory slip. For application of the engobe, Campos uses a slip-trailing bottle, brushes, sponges, and an airbrush. To use a slip trailer, the engobe is dried out a bit, so the consistency is like yogurt (1, 2). For brush work, the engobe is diluted to work like watercolor. All of the patterns are drawn by hand or created with handmade clay stencils; no wax, latex resist, or transfers are used. 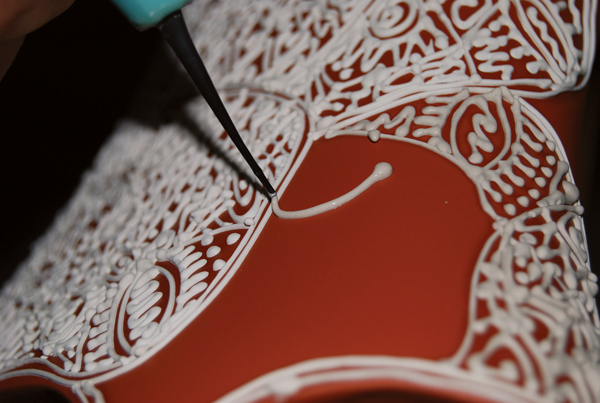 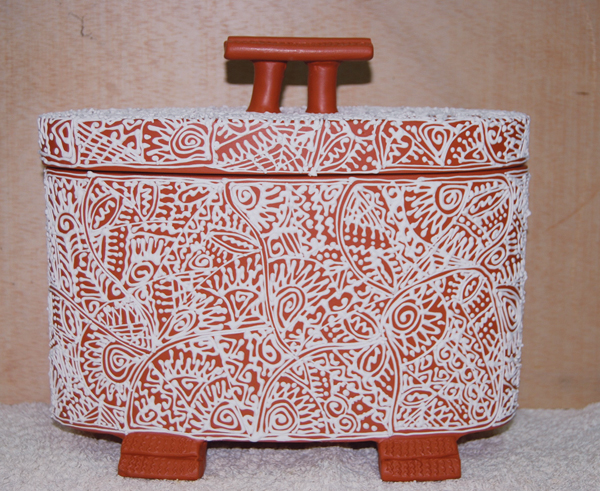 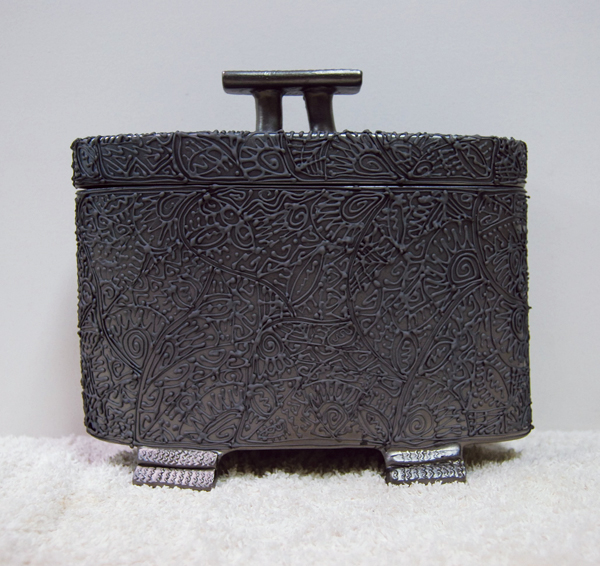 Campos explains that for the patterns, “We draw inspiration from ancient African and Pre-Columbian cultures, the artwork of Emile Galle and Les Massier, nature, and Mediterranean landscapes. Another reference for us was the black on black ware made by Maria Martinez and the Pueblo Native Americans.”

Campos fires to 1742°F (950°C) in reduction. All the pieces are glazed on the inside with a lustrous glaze that looks similar to a raku luster.

After the piece is fired (3), the refractory slip is removed by placing the pot under running water, and rubbing the surface with a white kitchen scouring pad (4). Steel wool and the fibers of green plastic scouring pads are too rough on the surface. When the piece has dried, Campos applies wax (a floor wax or butcher block wax) to finish the piece (5).

The areas of the surface covered by the slip cannot absorb any carbon, and after the firing and cleaning the surface those areas are matte in texture and appearance. The heavier the slip application, the lighter the matte black becomes. The thinner the application of the slip (6–9), the darker it becomes, as more carbon absorbs into the surface. The rest of the terra-sigillata coated surface remains shiny. 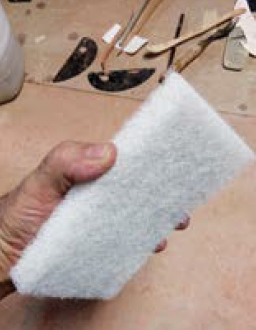 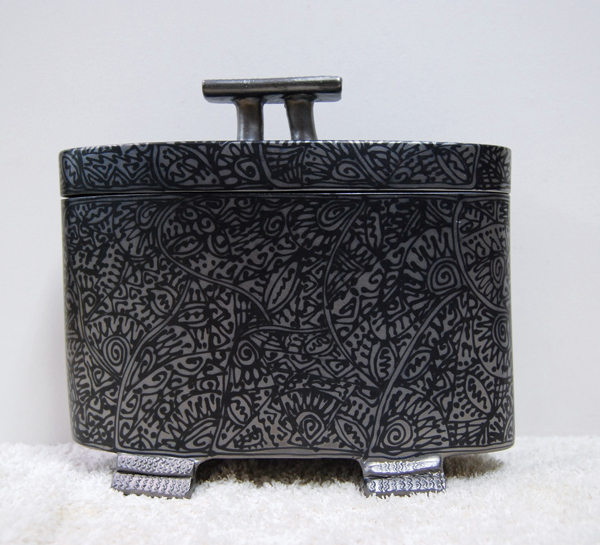 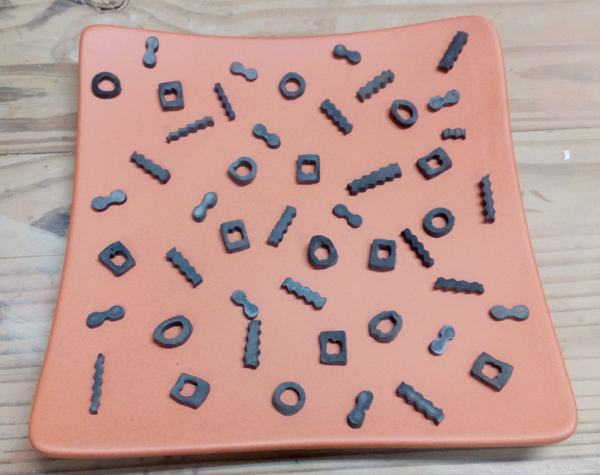 Reduction Firing in a City

Campos has an elaborate system that allows him to fire reduction kilns (10) inside his studio while controlling the venting of any fumes and smoke as to not disturb the neighbors.

Campos describes a typical firing, “There’s a normal rise in temperature, in oxidation to 1652°F (900°C). After this temperature is reached, I plug the secondary air intake from spy holes and the primary air intake of the burner to create a totally reducing kiln atmosphere. I allow the gas to pass through low pressure and then I open the chimney. When the gas arrives at the chimney it creates a yellow flame and black smoke (the gas is completely burned). If the kiln is outside, this is generally not a problem. If it is inside it requires a smoke outlet and ventilation.

In my studio, I have a secondary burner and kiln setup, so that whether outside or inside, the soot and small black pellets of ash that can disturb the neighbors is taken care of. The burned gas from the reduction of the principal kiln (11) is directed into this secondary kiln (12) and, with the help of another burner, an oxidizing atmosphere is created in this second chamber. In this way, the final exhaust from the vent hood above the kiln is clean and free of smoke. 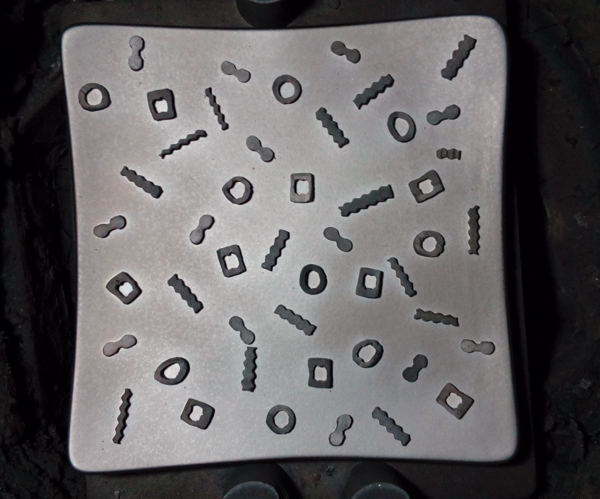 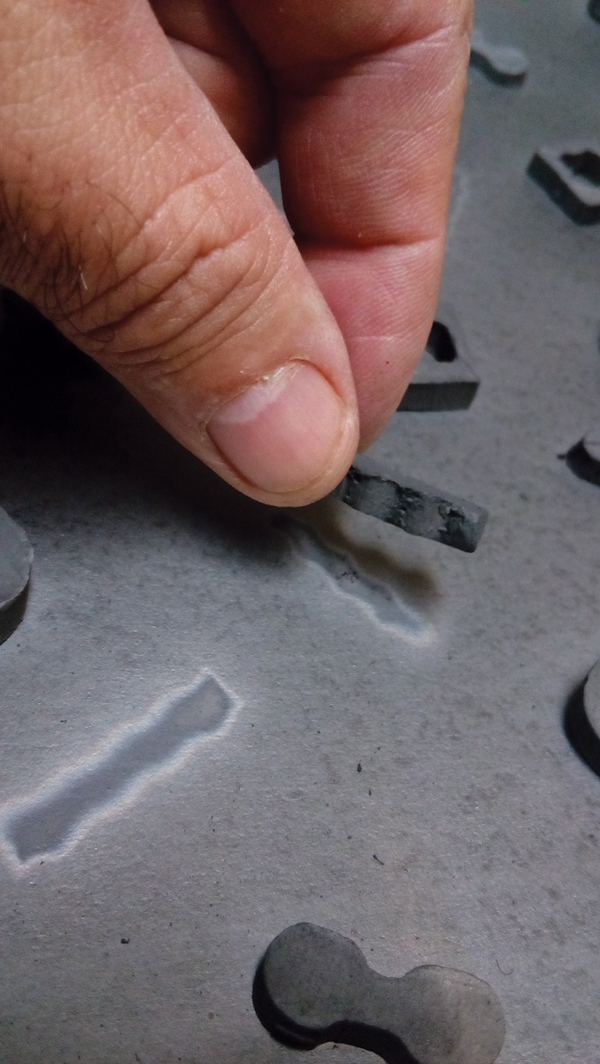 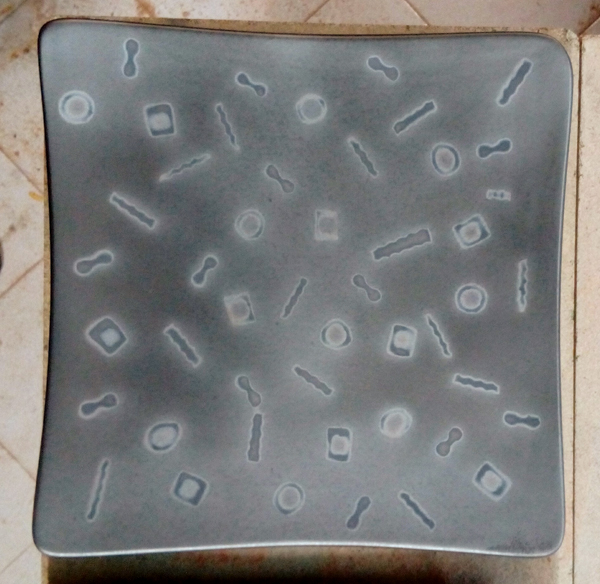 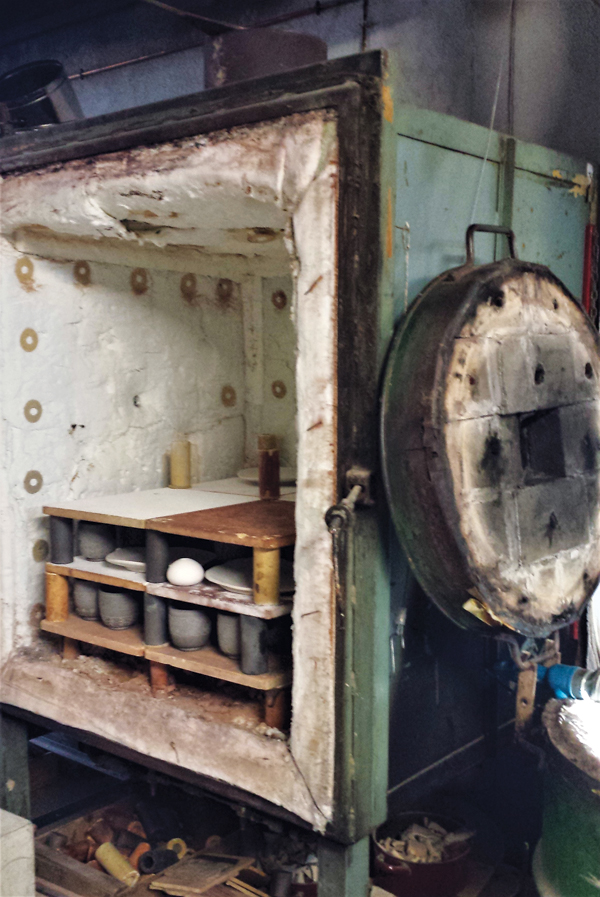 A Diverse Range of Work

Campos has made his living as a ceramic artist in a variety of ways, including teaching, creating a line of Iberic and Roman reproductions for museums, working with an architect to make ram-pressed lighting fixtures for buildings, and most recently, working on a line of teapots for a store in England and developing a new turquoise matte glaze for functional ware. 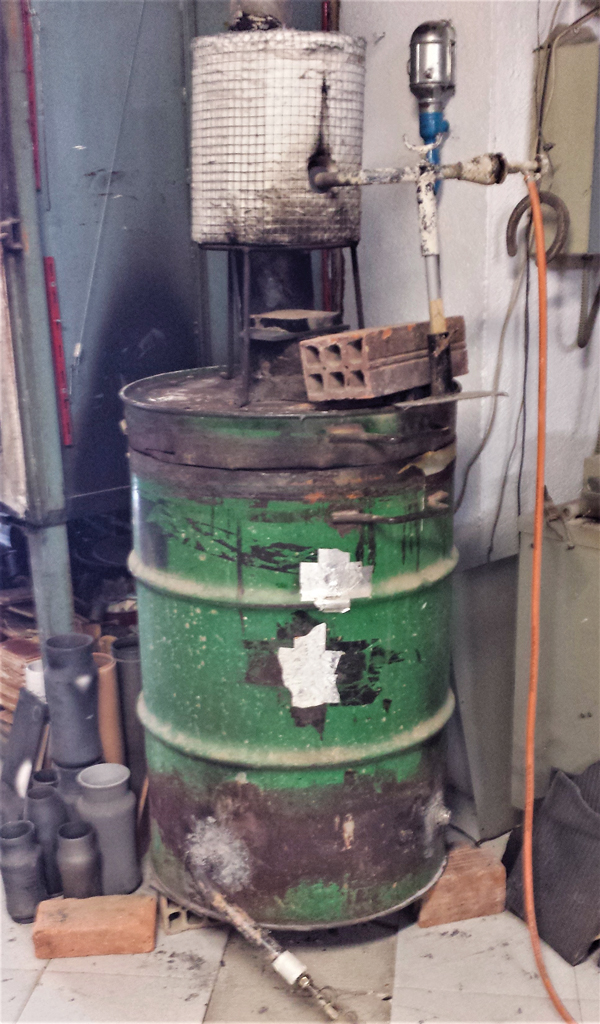 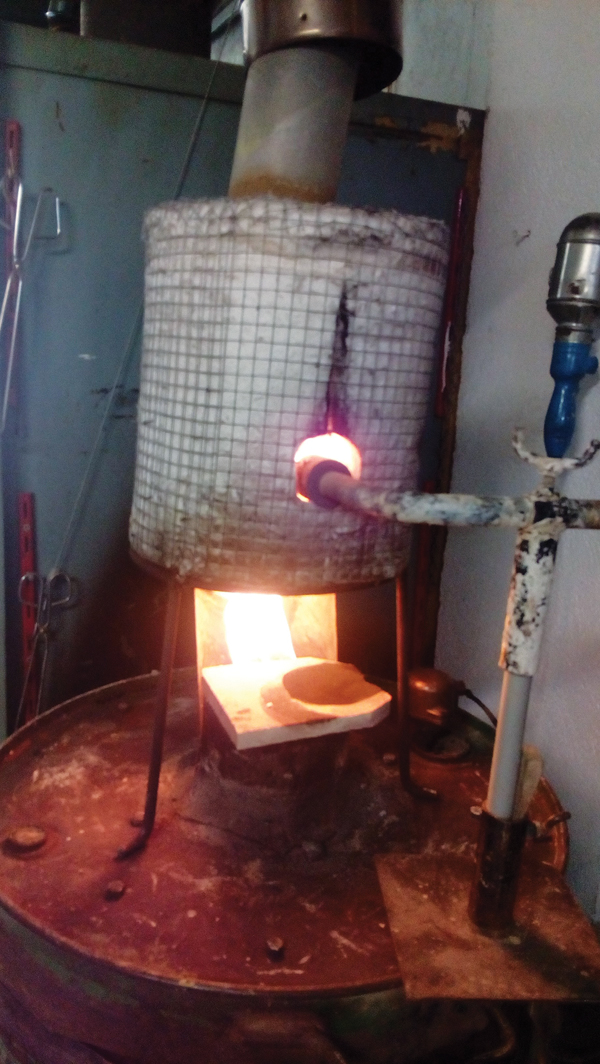 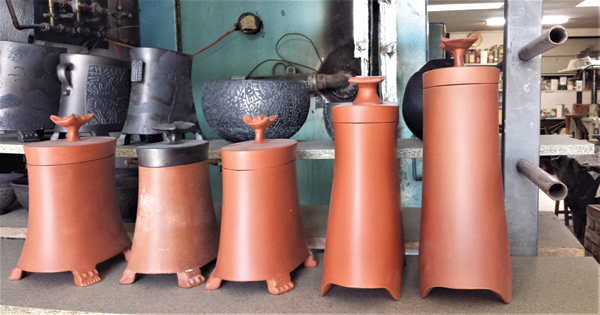 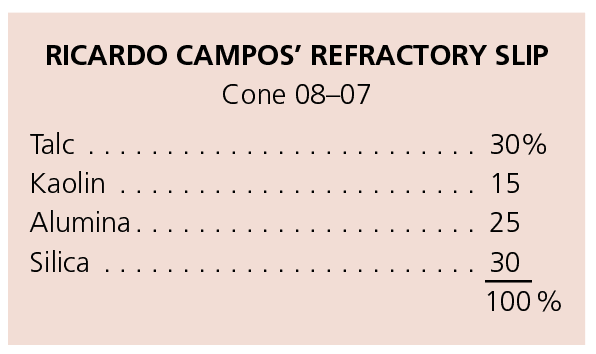 the author Lauren Kearns is a professional ceramic artist and teacher who formerly served as executive director of Carbondale Clay Center. She has assisted students of all ages and abilities in ceramics and continues to be an active and avid promoter of the ceramic arts.