Appears in the September 2015 issue of Ceramics Monthly. 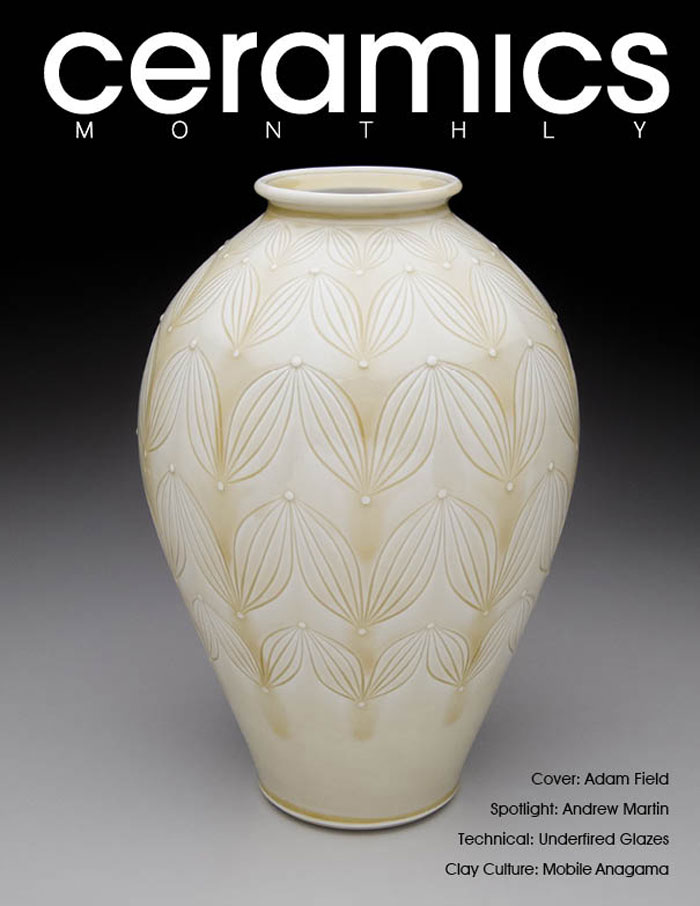 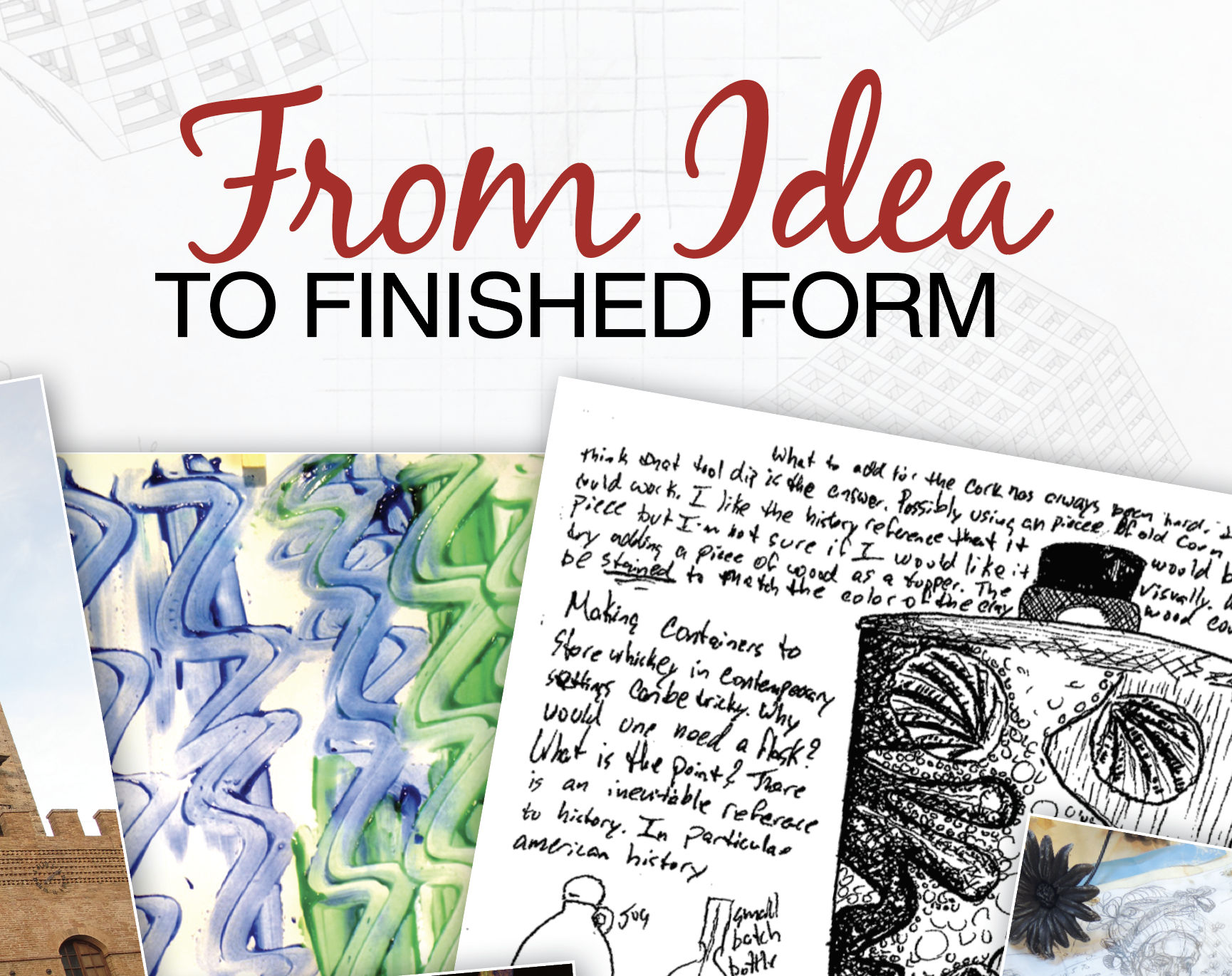 For our inaugural readership-wide contest, we asked you to show us your creative process, from the drawing board (or screen, or photo, or finger painting, or found object) to the finished piece in just two images. The variety of work and approaches to idea development in each submission have been inspiring.

It was difficult to narrow down all of the entries to just those you see here, and we worked through several stages to complete the selection process, discussing the ways that the idea or planning image related to the finished piece, and what surprised us about specific submissions. After we selected 18 semifinalists, we looked at the finished work and evaluated the quality, the logical, associative, or other ways it expressed the investigations started in the idea image. We also evaluated the way that the work relates to, departs from, develops or expands on topics, themes, and styles currently being explored and discussed in the field of studio ceramics.

The intricate beauty in nature compels me to carve bas-relief botanical images into wheel-thrown, leather-hard clay pots. Working from visual resources such as photos, and live and dried specimens of the plants, I first sketch the image on leather-hard clay with watercolor paints, which will burn away during the firing. I add depth to the sketch by excising the background using a variety of tools (including X-Acto knives and old dental tools) and by adding small bits of clay to the foreground. The long carving process requires me to constantly mist the piece and cover it with plastic to keep it workable. When finished, each piece dries very slowly before the bisque firing.

The unglazed exterior of each porcelain piece is hand polished using wet silicon-carbide sandpaper after the bisque firing and again after the glaze firing to achieve a smooth, marble-like sheen. 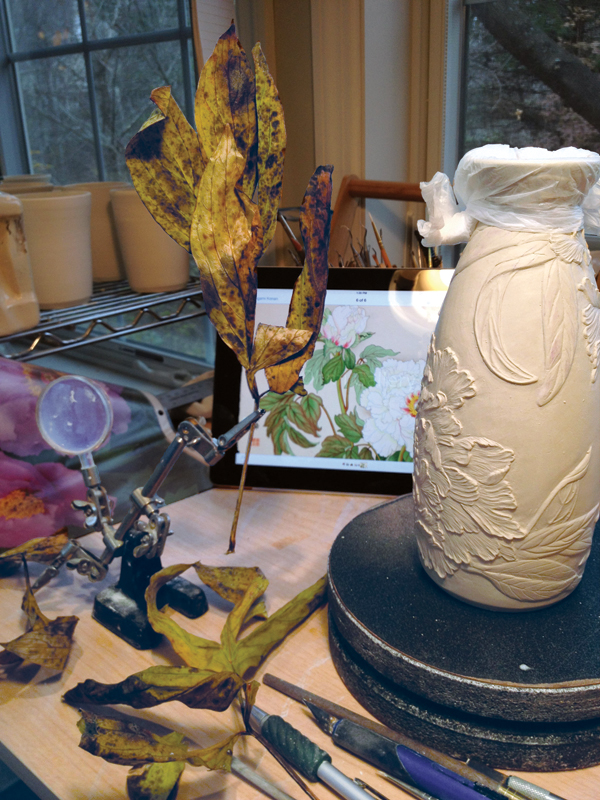 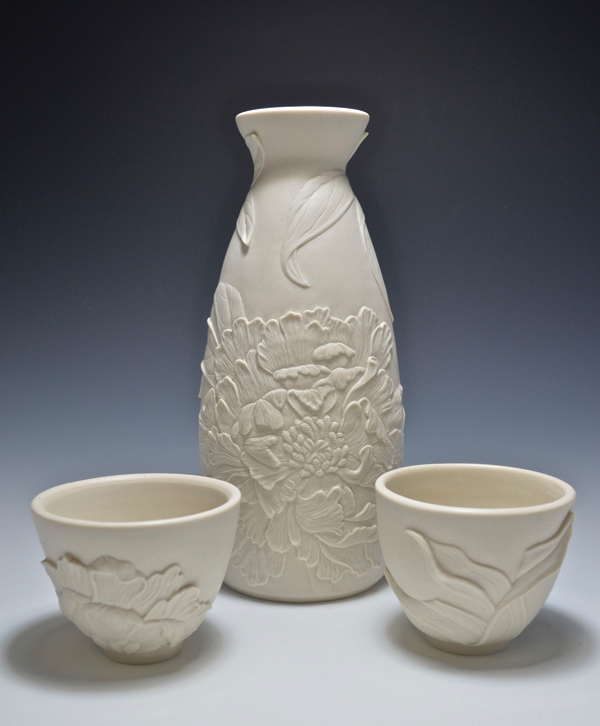 The sketchbook has become an essential part of my creative process over the years. My approach is a little different in the sense that I don’t sketch up an idea and then try to create it. I use sketching as a reflective time to contemplate what I have already made and to jot down notes and ideas on how to improve the piece for the next firing.

When a pot that really speaks to me comes out of the kiln, I draw it in ink. Notes on the page talk about the use of the object, how it may interact in the home, different ways to stack or load it in the wood kiln to get specific effects, or even where the work fits into contemporary ceramics. When adding notes, I tend to write as if I am having a conversation; this helps me to take my time and really think about what it is that I’m trying to say. 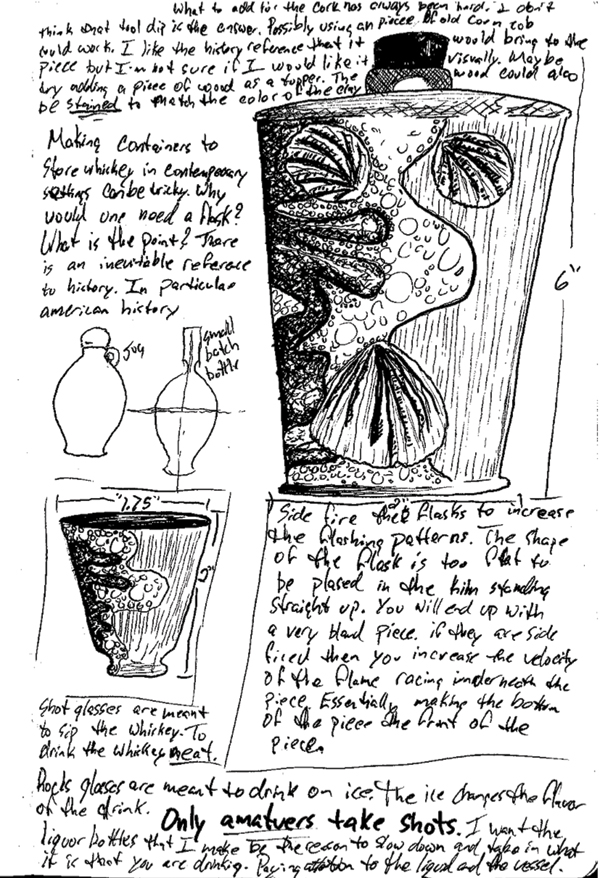 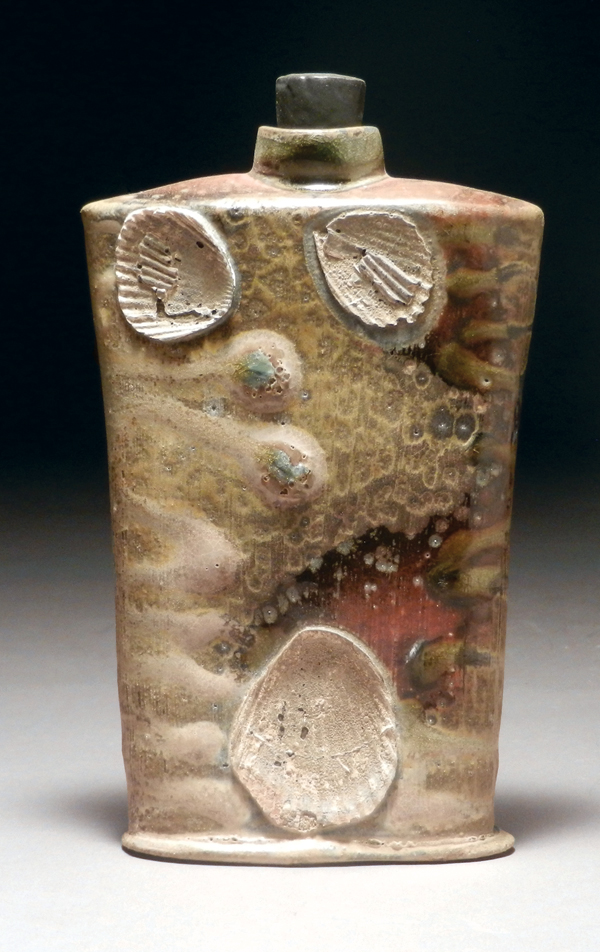 Sketching is one of the most important parts in my creative process; not only is it a way to see shape, form, and gesture, but the method I use also allows me to play around with different color combinations without having to redraw the same shape over and over. Sketches are scanned and touched up in Adobe Photoshop. Next, I use Adobe Illustrator to trace the drawing, making it a vector-based image that can be adjusted to any size without pixelation. This results in a coloring-book like image in which each ‘bubble’ can be selected as an individual object or grouped together for quick changes in color. Using these sketches as a base, I then build a hollow mold out of high-fire clay. The mold is bisque fired, filled with glaze, and fired to cone 04. During the firing, the glaze bubbles and grows to fill the mold. After cooling, the mold is removed using an angle grinder fitted with a diamond blade and the solid glaze form is carved using a rotary tool fitted with various diamond bits. Finally, the piece is painted using any variety of media. If cone 012 or 016 glazes or china paints are added, the piece is refired to affix the glaze, and any paint is applied afterward. 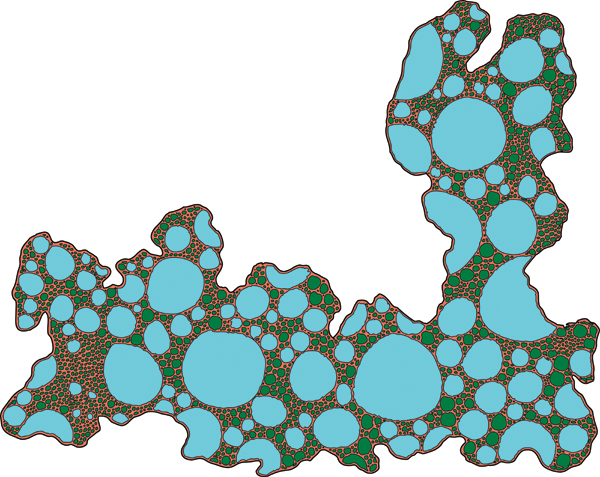 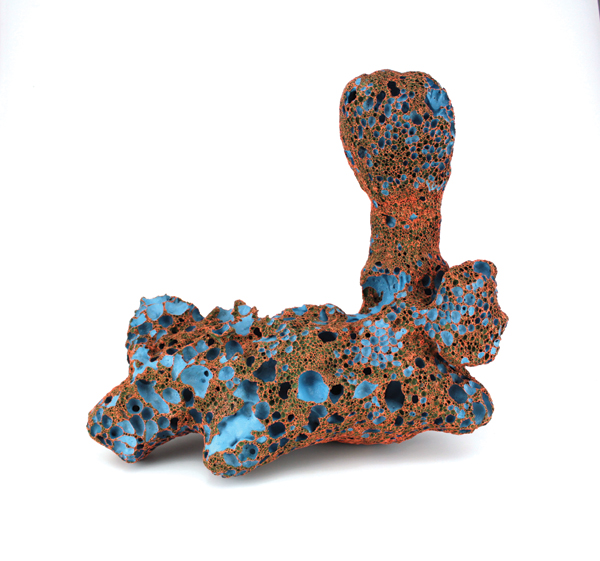 My ideas usually begin as quick, crude drawings in a traditional sketchbook. I then move to the computer to a draw a more detailed version where I work out dimensions and devise a method for construction. Next, patterns or blueprints are printed out to aid in the building process. These are sometimes used for further brainstorming and note taking. Finally, in the building and firing process, another round of adjustment happens as the piece moves from idea to form. 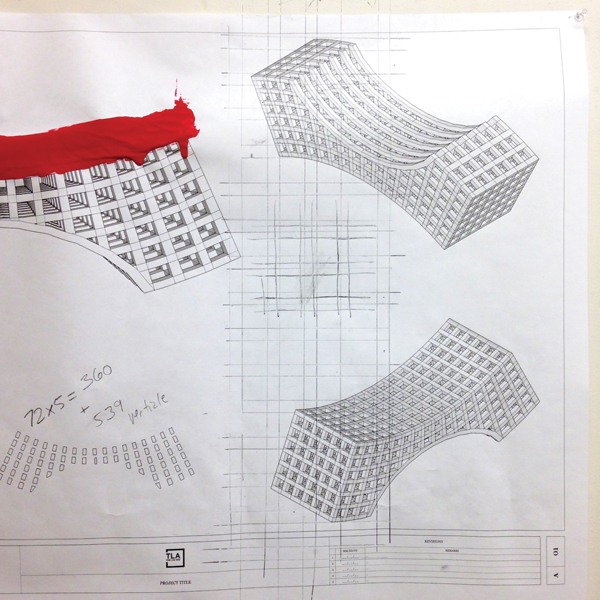 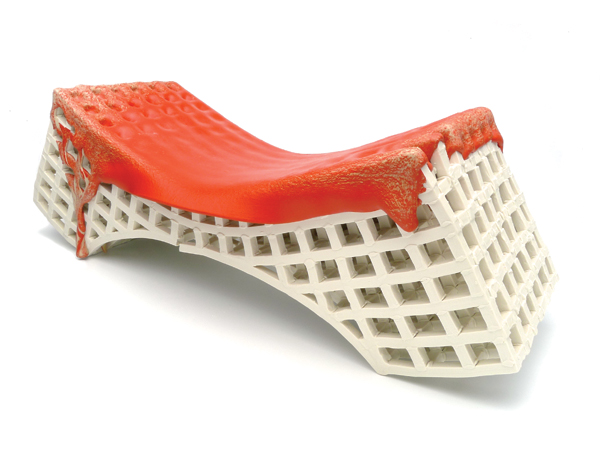 As a storyteller I communicate with my hands, translating stories into clay. My sculptures are autobiographical narratives that include animal as well as human figures. Animal imagery is often in the form of birds, which I see as both cheerleaders and naysayers. As the daughter of a florist, flowers are also intrinsic to my sculptures. They create a dialog internal to my work that relates to the ways that flowers are always present and dying at monumental, life-changing ceremonies. All of the elements join together in each sculpture and it, in turn, serves as a spirit guide that manifests intentions, relieves anxieties, and whispers secrets.

My technique of sketching, making maquettes, then throwing on the wheel and handbuilding allows a personal connection with my clay and forms. This intimacy is imperative for me to process my emotions and stories into clay and create meaning with images, which empowers me in all aspects of my life. 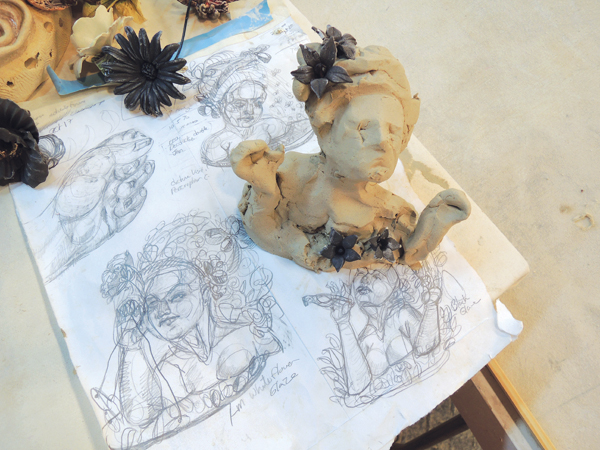 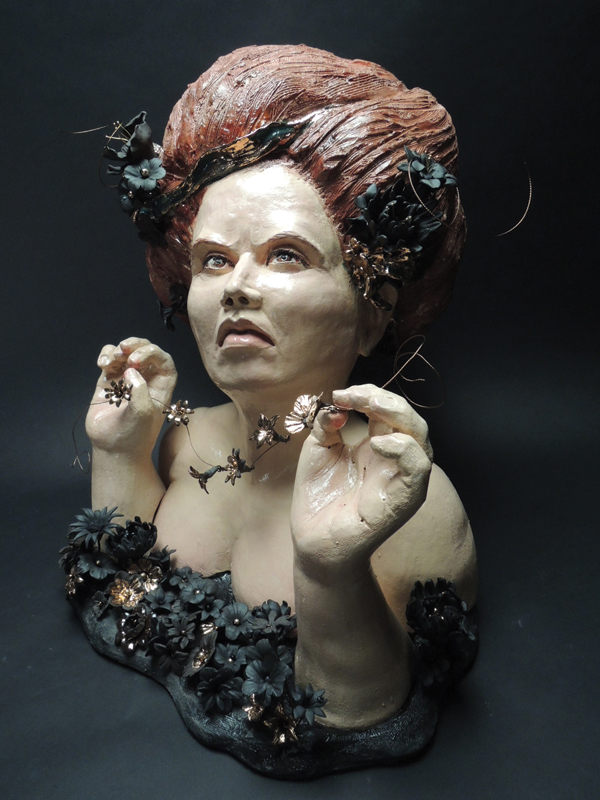 Inspiration for my ceramic pieces comes from Tuscan architecture, especially old Tuscan buildings such as the towers of San Gimignano or the Leaning Tower of Pisa, old farms, and even used machinery.

While I was studying the towers of San Gimignano, I became fascinated with the different layers of bricks. To emphasize that surface on a clay vessel, I used a cut-and-stretch technique. The technique consists of making incisions in the wet clay surface and then pushing the form out from the inside while throwing.

The inspiration from Tuscan farms led me to an old plowshare used in agriculture. What I really liked about that tool was not only the shape, but also the rusty texture, which I achieved by adding metal to the clay, scratching the surface, and unevenly spraying a dry glaze on top. 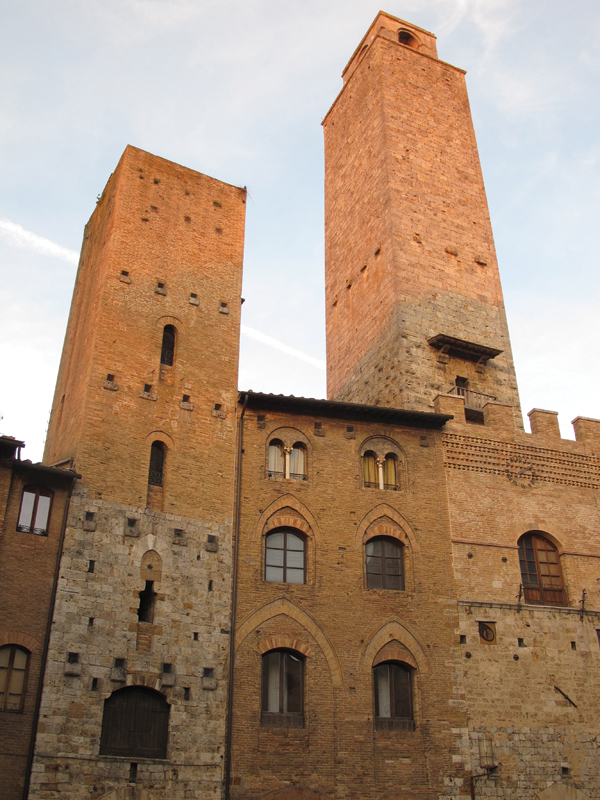 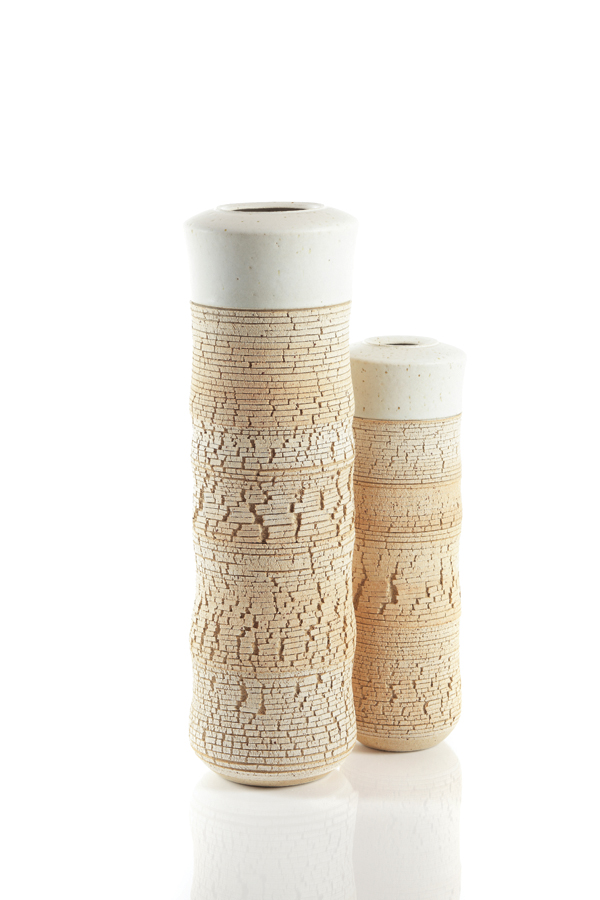 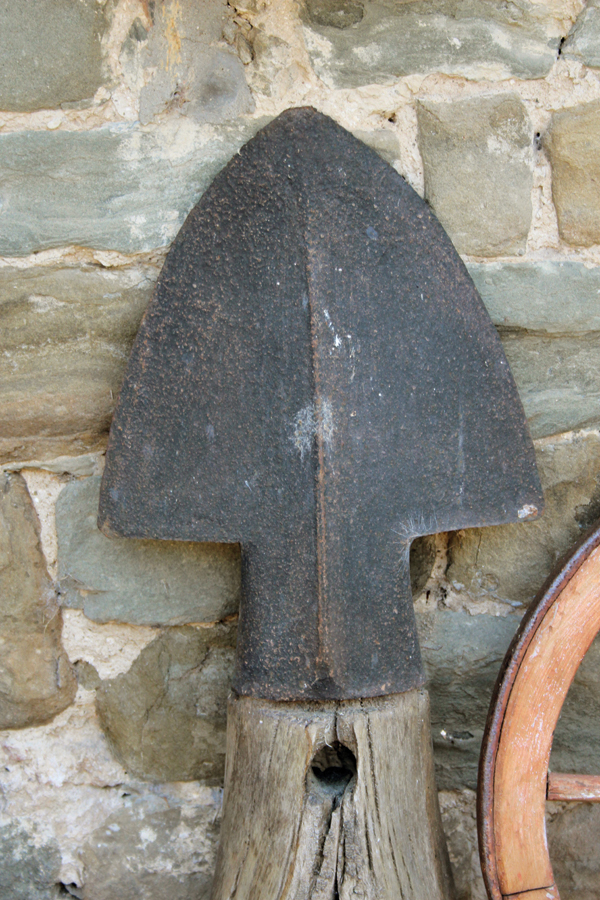 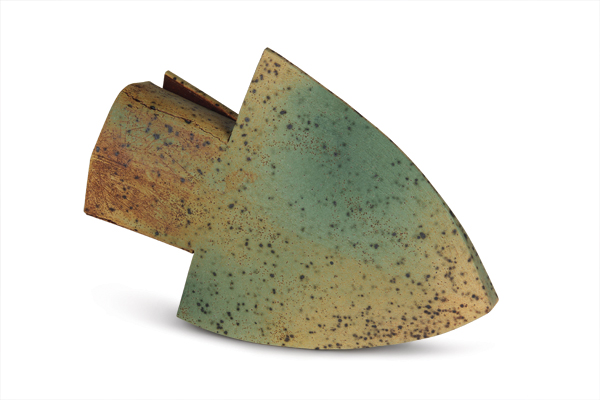 I purchased a mat, usually used for putting underneath wet shoes, because of its interesting surface. I liked its industrial, gridded pattern of convex circles, which I wanted to turn into a three-dimensional texture on ceramic pieces.

After having made a plaster mold of the mat, I first formed a cylindric vase and found out, that depending on how the circular indentations (which I call bobbles) are oriented, the visual impression changes due to the way light hits the texture. Several sketches and documentation/detail photos followed this observation as well as making another two plaster molds for slipcasting.

I also started applying single bobbles to forms, playing with order, disorder, quantity, size, and color. Through the process I observed the way that using a few bobbles created an impression of movement across the surface. I settled on a monochrome, slip-coated surface as multiple colors could overwhelm the complexity and reduce the impact of shadows created by the relief texture. I experiment a lot with the photos I take during the process, and not only use them in planning, but also include them as part of the final work. 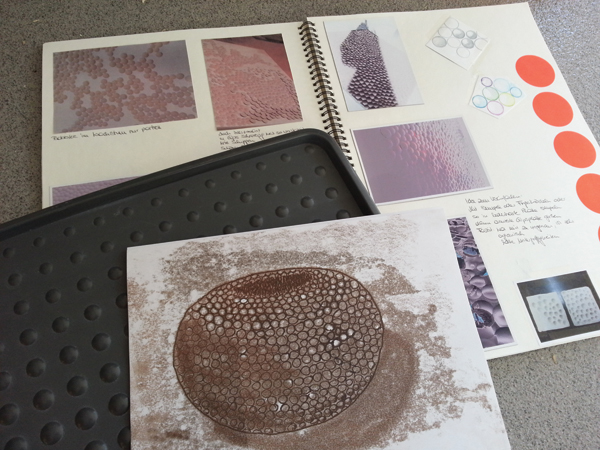 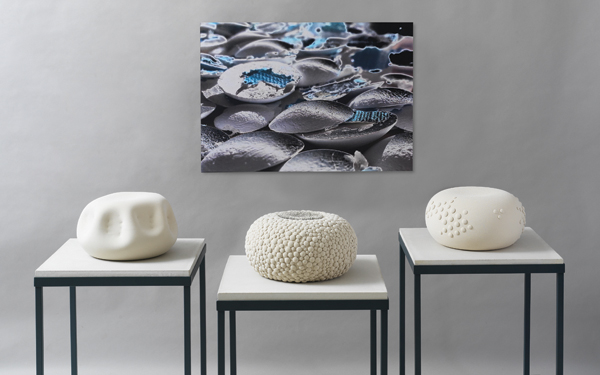 I work very quickly, and ideas can materialize from the most common everyday occurrences. I often use a camera or my iPhone to record ideas, images, or patterns that might make a good decal, or surface decoration.

Over the last six or seven years I’ve built up an extensive collection of stock and custom decals. This collection, and a good knowledge of how to design and print decals, has helped me to think about the possibilities in layers of imagery.

When I see a photograph that might make a good decal, or a pattern that could be manipulated into a layer of color, I can quickly manipulate it, print it, and apply it to either a wet clay or glazed surface. I like the fast turnaround time, and the opportunity to quickly respond to my environment.

I have found that quick images like a dancing squirrel or a selfie can become a great one-of-a-kind mug with the intent to just to have fun. But quick experiments like finger painting with my children or pulling a cattail pattern off a Kleenex box can also be developed into an entire body of work or dinnerware pattern. 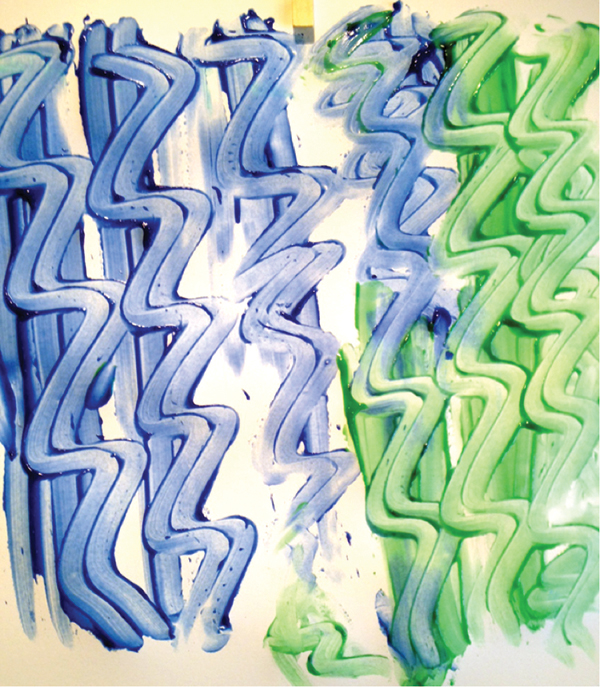 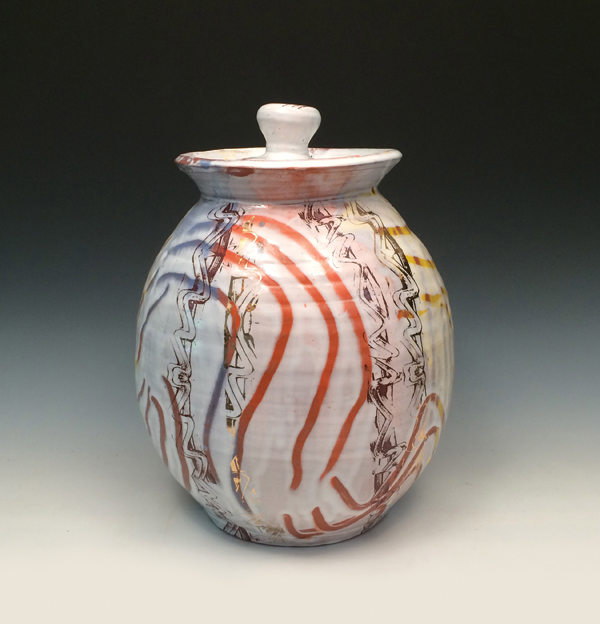 Abstractions of letters of the alphabet are among the structural references and sources of inspiration for my sculptures. I use tarpaper to make models and maquettes, patterns, and molds. Its formability is not unlike that of clay slabs. I generate patterns from sketches of letters. The most promising of those patterns are refined and are used to generate elements of slab-constructed sculptures. 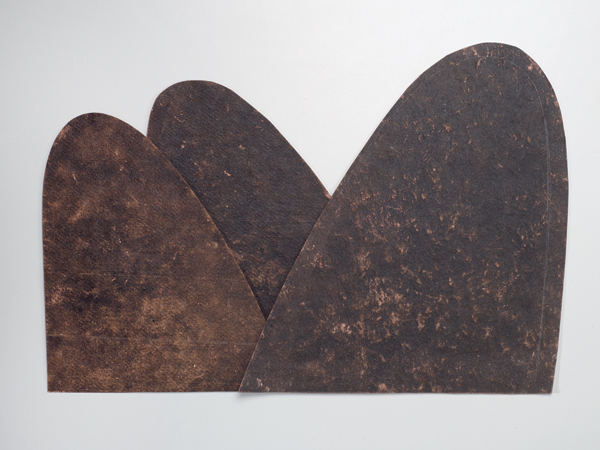 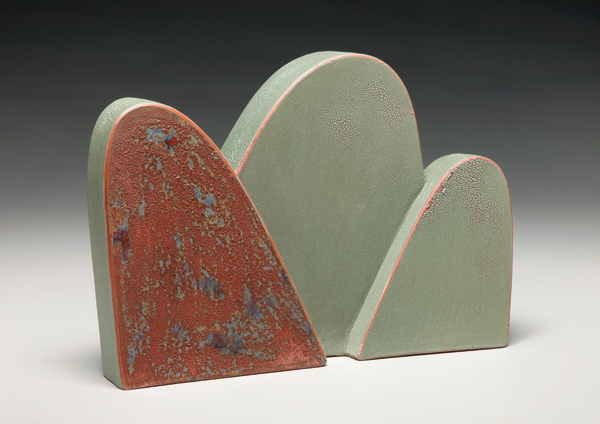 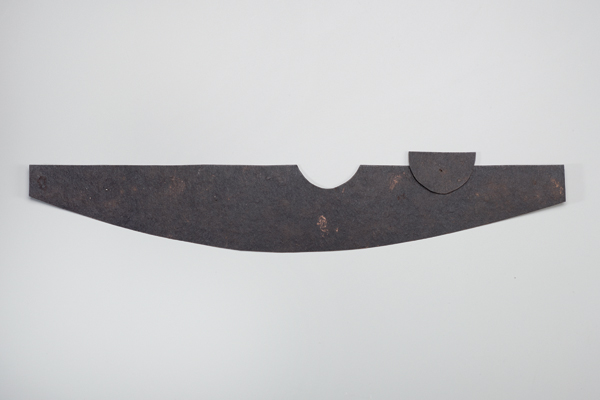 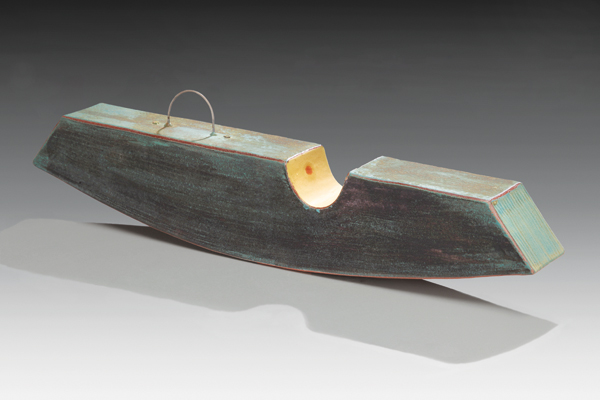