Appears in the June/July/August 2020 issue of Ceramics Monthly. 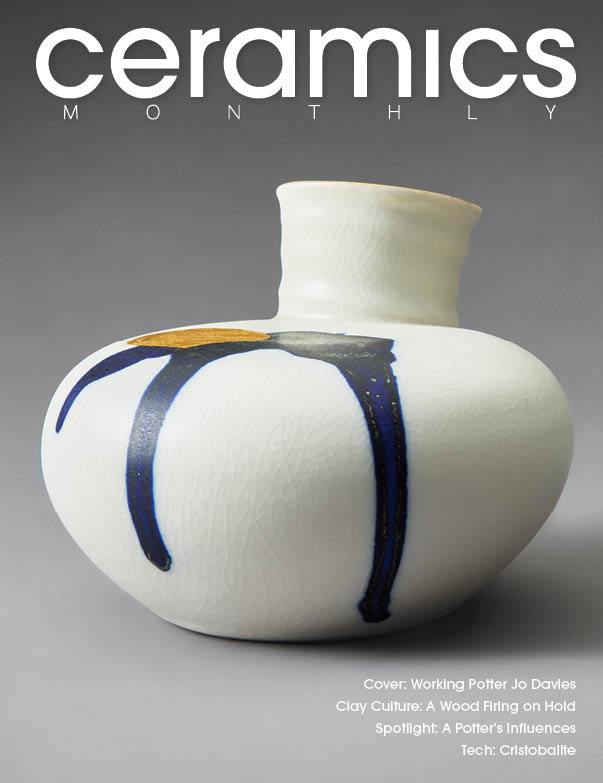 The persistence of this ceramic artist while traveling in Chile paid off when he was granted access to Pre-Columbian sites, pieces from a museum collection, and an artist’s personal studio.

It was the Diaguita ceramics, the Pre-Columbian ceramics of Chile, that captured my attention. Why had I never seen this amazing culture’s clay works? Now, in the Museo Chileno de Arte Precolombino in Santiago, Chile, I was furiously trying to absorb, sketch, and photograph the work from the exhibition “The Art of Being Diaguita.” I was bowled over.

My wife, Carol, and I were traveling in Chile: drinking hot maté through a metal straw with locals in the mountainous Patagonia region, scuba diving around one of the massive stone heads off the coast of Easter Island, and now experiencing the high desert of Atacama—viewing Saturn’s rings at night and hiking around geysers during the day. 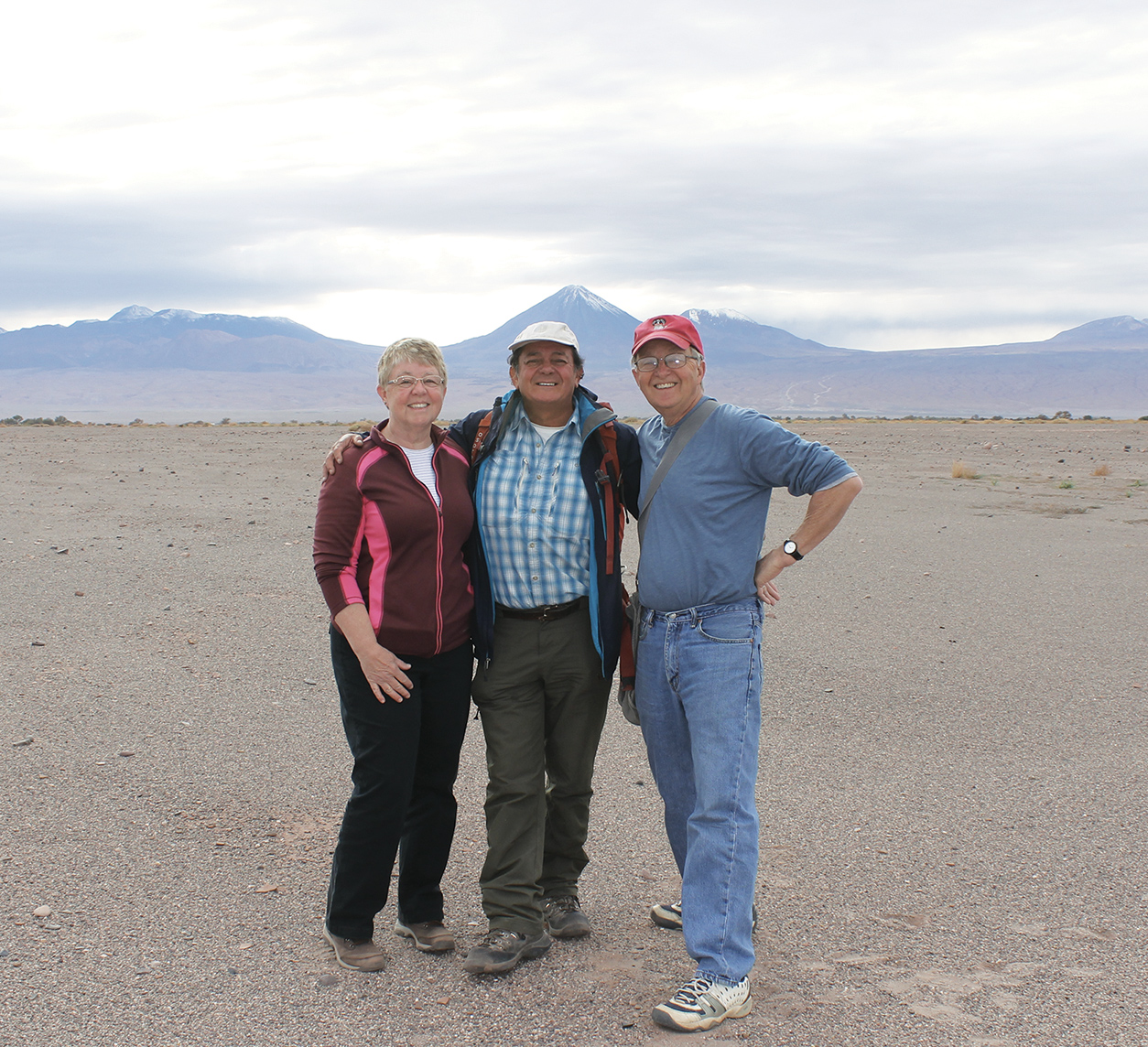 We were staying in Explora lodges, and in the evening the guides sat with the guests to decide what they would like to do the following day. Options included riding horseback using a comfortable Chilean-style saddle, hiking a volcanic rim overlooking the Pacific, having a picnic with Chilean wine in the Andes. “Would it be possible to drive us to the sites where Diaguita ceramics were made?” I asked.

Pointing to a wall map, Francisco, our Explora guide, said such a drive was too far considering we would only be at the lodge for three days. But he did say there were other Pre-Columbian sites nearby. However, Luis, who the senior Explora guide affectionately referred to as the dinosaur, was the only one who could take us, and, unfortunately, he was presently away.

Having piqued my interest, I tried every trick in the book to get Francisco to take us to the site. Jokingly, I complimented him on how handsome he was in his blue plaid Explora shirt, even suggesting he sell me the shirt so I could wear it and be as handsome. He and Pedro, Explora’s manager, were impressed with my interest and newfound knowledge, but said, “No, Luis is the only one.” 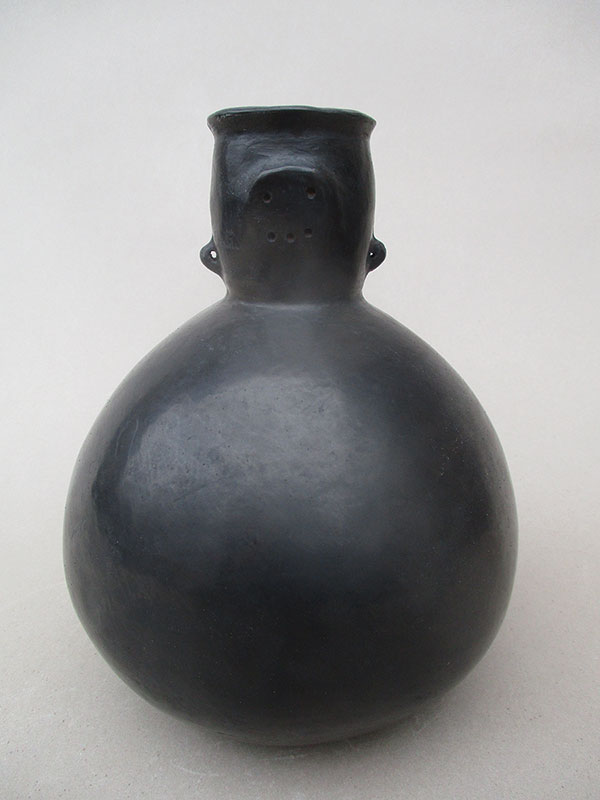 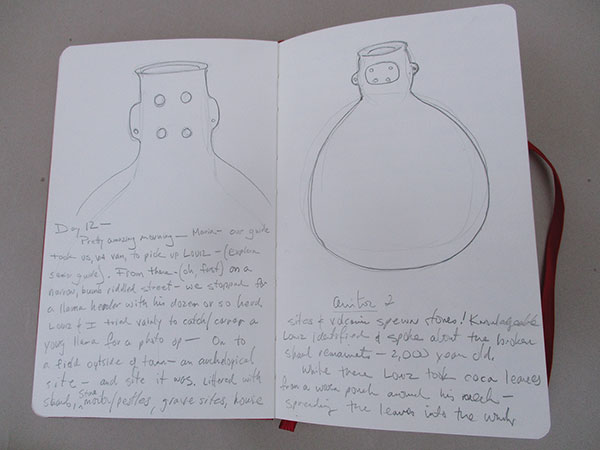 The night before we were to leave, Francisco came to our room with good news. Luis was back and would be happy to take Carol and me to the Pre-Columbian site. The next morning a van with our interpreter, Maria, picked us up and drove to pick up Luis. Expecting a wizened old Chilean, we were surprised when out bounded 55-year-old Luis with a radiant smile and wearing his blue plaid Explora shirt. A young, vibrant dinosaur, I guess.

Leaving the village, we were stopped by morning gridlock. A herder was blocking the street with his flock of llamas, alpacas, and sheep. Out of the van, good-natured Luis helped Carol and me try to corral one of the young llamas for a once-in-a-lifetime photo-op, but to no avail. The young, agile-footed Camelidae easily darted around and between us while the herder cleared a space for us to be on our way.

A few miles from the village, the van stopped and we got out. As we walked to the site, Luis took coca leaves from a small pouch. He scattered the leaves in the wind, while singing a melodic chant. We were on sacred ground. Perhaps this is why only Luis could bring us here. 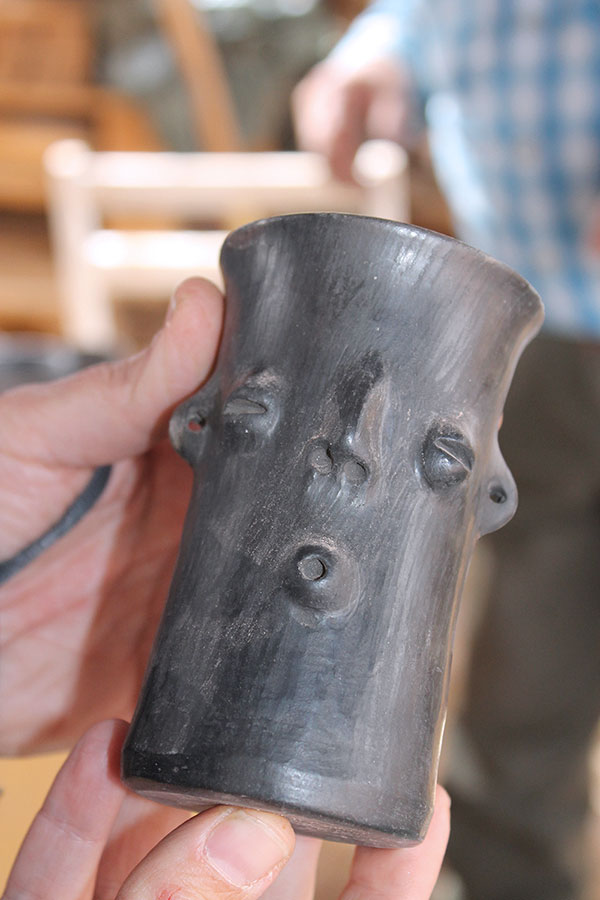 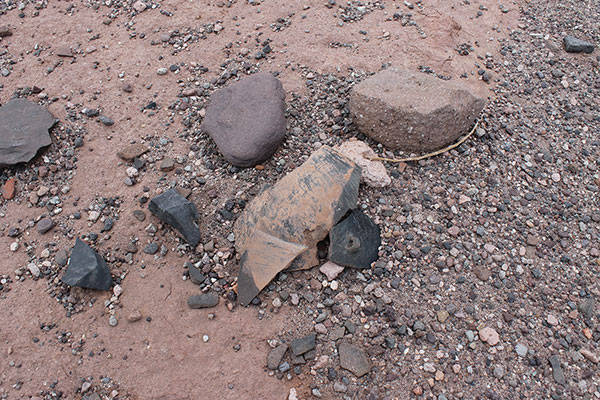 Shards, parts of a grinding stone, and foundation remnants evidenced a once lively village, an ancient community that dotted the flat plain, with the Andes in the distance. Luis picked up some of the shards, pointing out details, and revealing their secrets. Then he placed the shards back in their sandy resting place.

This culture was older than the Diaguita and the ceramic work was distinctly different; well crafted, thin walled, burnished to a black sheen, mysterious, and ancient.

Luis is also a ceramic artist and makes museum-quality reproductions of this culture’s work. I had seen and purchased his reproductions the previous day from a vendor, not knowing the work was his. I ask why he did not also make reproductions of the Diaguita. He told me that he preferred to emulate this work because the Diaguita is not pure Chilean as it was influenced by the Inca from the north who had assimilated them into the Inca empire.

Back in the van, we drove to the Gustavo Le Paige Museum, which houses one of the best Pre-Columbian ceramic collections in South America. Unfortunately, it was closed for reconstruction, so we walked to a small museum office. Through Luis’ connections, the staff agreed to bring out two beautiful black burnished Pre-Columbian pots. Told I could handle and sketch, but not take photographs, I cradled the pots in my hands trying to absorb what hidden secrets they could tell. 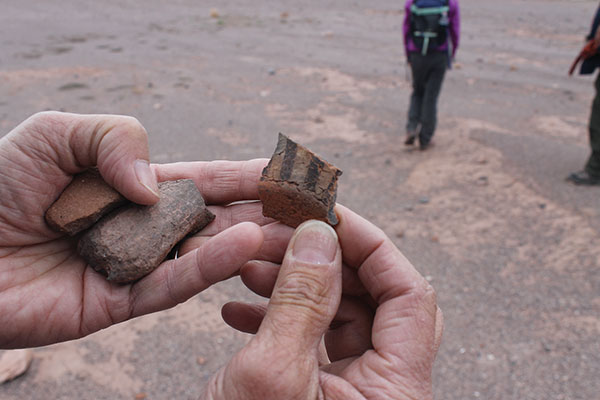 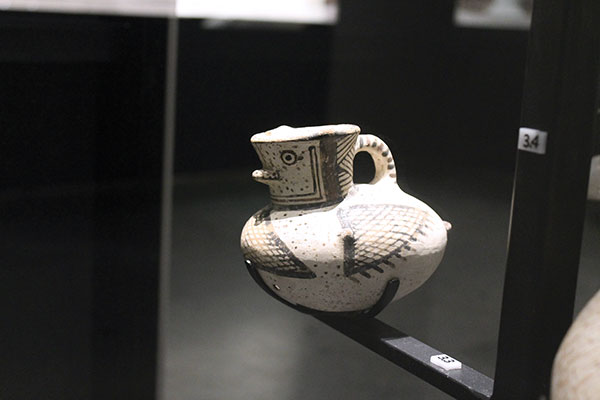 Two prominent characteristics of the Diaguita ceramic bowls, which peaked in production around 1300 CE, were their zoomorphic features (bird or feline), and the optical designs painted on the sides of the bowls.

The animals and birds incorporated into the bowls must have held attributes the Diaguita admired. By rendering them in clay, perhaps the Diaguita were able to assume those qualities. Zigzags painted or etched at the corners of the mouth may have represented sound.

Optical patterns were created by repeating a single geometric unit, using symmetry and negative space. Three colors—red, white, and black—were also used to accentuate the optical effects. It is surmised that the bowls were used in a shamanistic ritual in which hallucinogenics were inhaled. The optical patterning was more than decoration.

The ceramics from the Atacama Desert that Luis showed us are older than the Diaguita by 500 years (900 CE). These monochromatic, thin-walled vessels, burnished to a black satin sheen, offer fewer visual clues to develop an understanding of their use and possible significance than do the Diaguita bowls. The most intriguing are the anthropomorphic, globular vessels with a cylindrical neck, of a type called Negro Pulido or polished black. 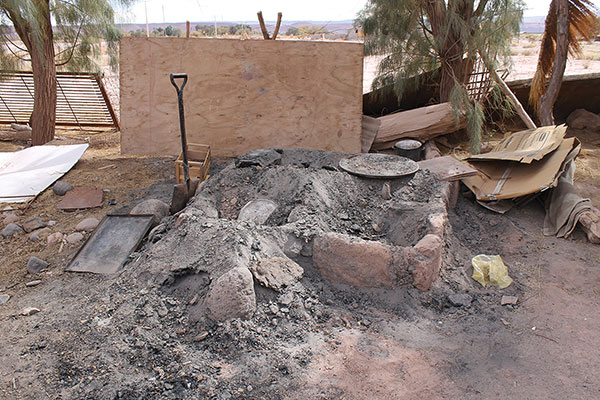 On opposite sides of the cylindrical neck are two expressionless faces, created with four or five dot impressions. Two pierced lugs on the neck reference ears. When I asked Luis about the meaning of the enigmatic faces, he said one face represented life, the other death. These vessels were made for the grave.

Understanding the meanings of Pre-Hispanic Chilean ceramics can be tricky, even for the experts. But what is not tricky is sensing the power and intensity the pieces hold and convey. The work resonates across time and space, connecting in ways words never can.

On leaving the museum office, Luis asked if there was anything else we would like to do before heading back to the lodge. “Could we go to your studio?” we asked. “Yes,” he replied although he didn’t feel there was much of interest to see. We drove a little farther from town; his pit kilns were near a small house in the country. In some ways his kiln site resembled mine in Michigan, with pieces that hadn’t fared well in the firing set off to the side. He picked up a cup-sized black pot with a modeled face on each side that had a chip in the rim making it unsalable and gave it to me as a gift. 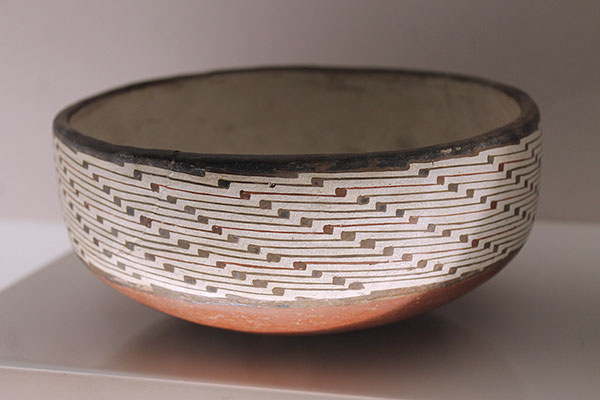 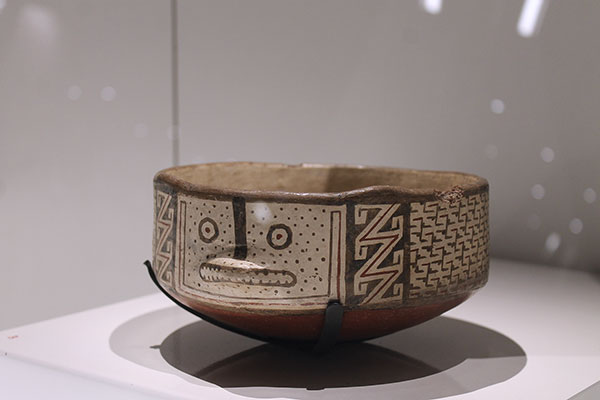 I picked up a smaller black cup, also chipped, that was modelled with duck-like features. “Puedo compar ested ceramica para sus esposa?” (My butchered Spanish for “Can I buy this pot for my wife?”) By now I knew Luis well enough. Smiling, he gave it to Carol.

Now we had to hustle to get back to the Explora lodge to make the shuttle to the airport. Grabbing our suitcases, I offered Luis my heart-felt thank you. Pedro, Explora’s manager was there also to say goodbye. As I got on the shuttle bus, he handed me a paper bag, smiling and saying, “Keep this a secret.”

As the shuttle left Explora, I began trying to absorb and process this most amazing of days. The beauty of chance that played out in our favor was beyond belief. Remembering the paper bag, I looked inside to find a blue plaid Explora shirt in my size.

the author Craig Hinshaw is an artist and instructor living in Davison, Michigan. He is the author of Clay Connections, a ceramics book based on his contributions to Pottery Making Illustrated. Learn more at www.craighinshaw.com.