Appears in the December 2015 issue of Ceramics Monthly. 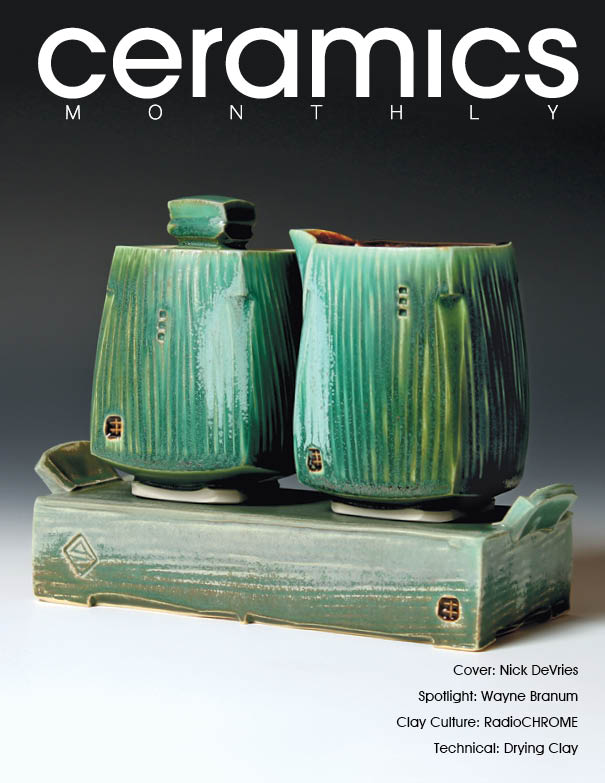 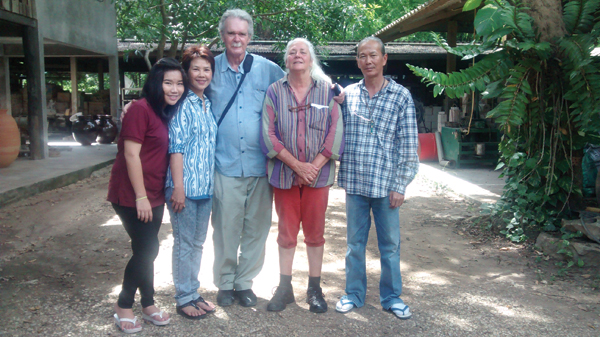 During the winter of 2014, my wife, Merrie Hamilton, and I abandoned our studio/gallery in the cold frosty village of Braidwood, Australia for the heat and humidity of South East Asia.

We spent two weeks in Lampang, a city of about 150,000 in Thailand. We randomly chose it by putting a pin in a map. Unknown to us at the time, the city is located on a large kaolin deposit and is the center of the Thai ceramic industry. There are more than 50 pottery factories scattered around the province, down from over 200 some decades ago. The city has embraced its ceramic tradition with large pots on display as part of the city’s architecture and streetscape. Even the lamp posts along some major avenues are ceramic.

Thailand. At a promotional ceramic display one evening in the Lampang Central Plaza, we arranged to visit the pottery of Rewutr Chaiyaruks, one of Thailand’s leading potters, a winner at the prestigious National Ceramic Art Ware exhibition in Bangkok no less than five times. The next morning, we arrived at the office of the Lampang Ceramic Association on our rented motorbike and were met by Sine, Rewutr’s 24-year-old daughter. A recent graduate from university where she majored in English, Sine runs the business side of her parents’ Napangkoon pottery that employs 25 workers. 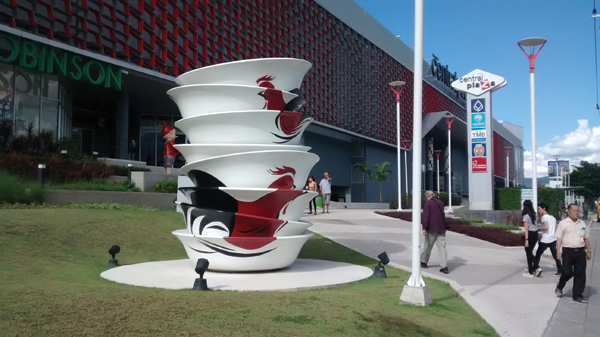 As we got into her car, we had to explain that we weren’t buyers but were tourists who just wanted to meet her father whose impressive pots we had seen featured around the city.

Lampang is the home of the famous noodle bowl featuring the distinctive stylized chicken design that is a favorite in homes all over While en route to Napangkoon, Sine drove us past a large complex dedicated to ceramic research where local potteries and ceramic artists can access information and advice. This is a great asset to the local industry.

Sine’s parents’ pottery, located 5½ miles (15km) from the city, was set amid a lush tropical garden with a shady courtyard lined with dozens of large glazed pots worthy of a place in a gallery. We recognized immediately that these were the works of master potter yet here they were, sitting out in the weather.

The courtyard led to a large showroom where over a hundred more of Rewutr’s pots were on display. Sine explained that these pieces were her father’s ceramic art, not the factory’s production ware. It took me 20 minutes to do a circuit of that room and courtyard. All manner of forms and techniques were on display showing outstanding virtuosity and expertise. And when I finished, I immediately wanted to go around again. And I did. 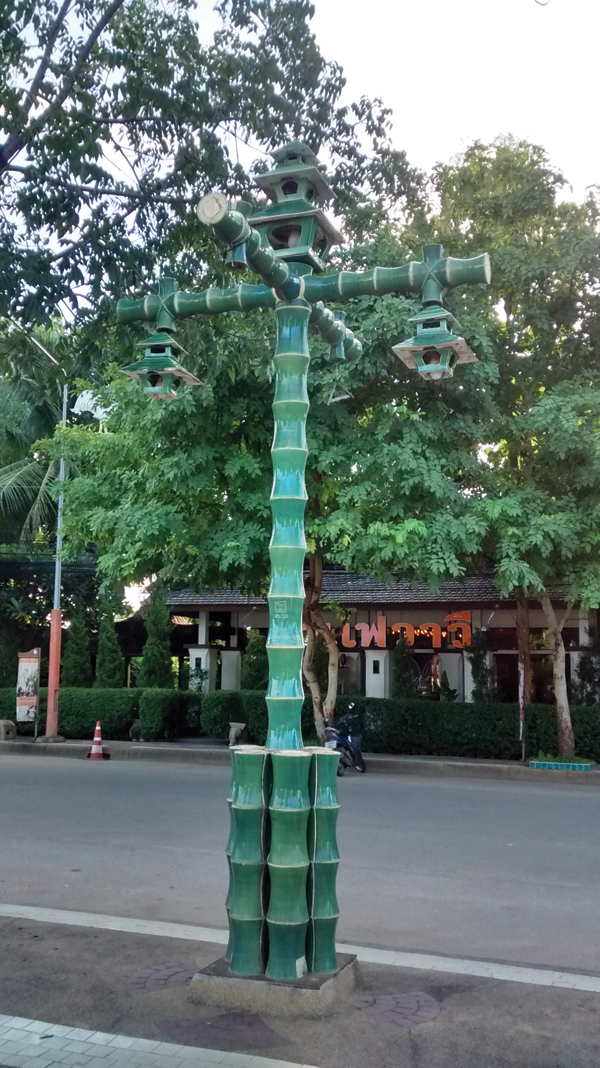 Although we were in his showroom at Napangkoon, Sine told us that Rewutr did not work from there; that Napangkoon was a factory producing mold-made wares for the Bangkok and international market; and that this side of the business was managed by her mother, Yao. She said that Rewutr had a separate studio a few miles away at their home.

Before Sine drove us there, we met Yao, a talented potter in her own right. Sine told us that her mother not only designed but also made the prototypes for the molds that were used in the factory. We were given a guided tour that included yet another showroom, this one full of the slip-cast wares produced by the factory. We also watched the staff busy with slip casting, decorating, and stacking shelves for the three LPG trolley kilns.

When we arrived at Rewutr’s studio, we were again surprised at the sheer size of the operation, set in a shady tropical garden with huge fruit trees. There were sheds stacked high with bisque ware and bags of glaze ingredients, as well as two trolley kilns and more staff preparing and applying glazes.

But what was more impressive was Rewutr himself. A handsome man with a gray ponytail, he was both welcoming and gracious. He was such an accomplished potter who had built a sizeable empire from scratch and yet we found him to be humble and modest. Like Yao, he spoke little or no English and Sine translated for us. 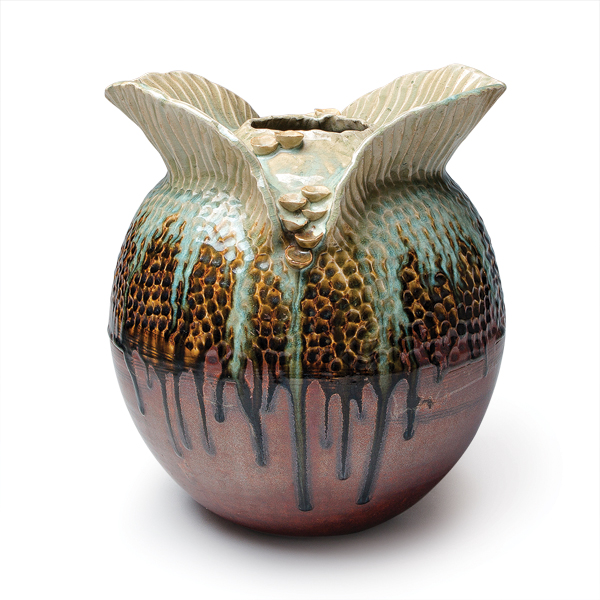 Next to the scale of his practice we felt like ants but he asked to see our website and said of it, with genuine warmth, “Yes, small but high quality.” Soon Yao arrived and the family took time out from their busy day to ply us with food and drink and spend a couple of hours talking with us in their studio/garden.

Rewutr told me he had studied material design at the Northern Technology Institute in Chiang Mai and had been working as a ceramic artist for over 20 years. “How would you describe your approach to pottery?” I asked. “Simply, nature and culture.” he replied. “And much testing.” he added.

Later, they insisted on taking us to dinner that evening. Sine was remarkable in her ability to pick up on cultural nuances and infuse our conversation with humor. 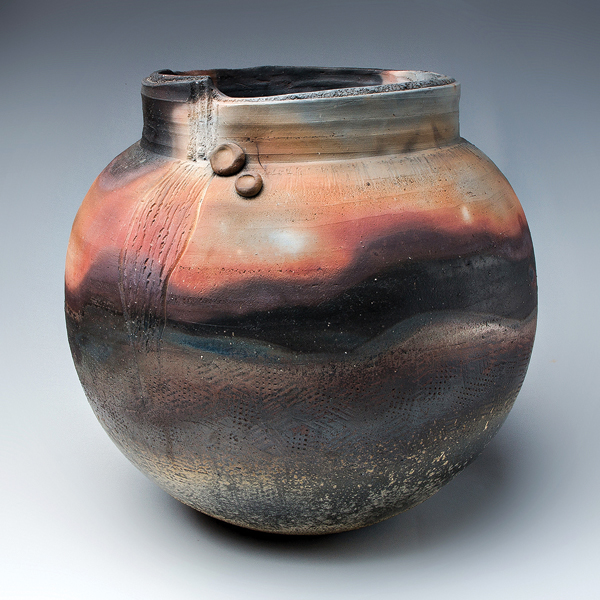 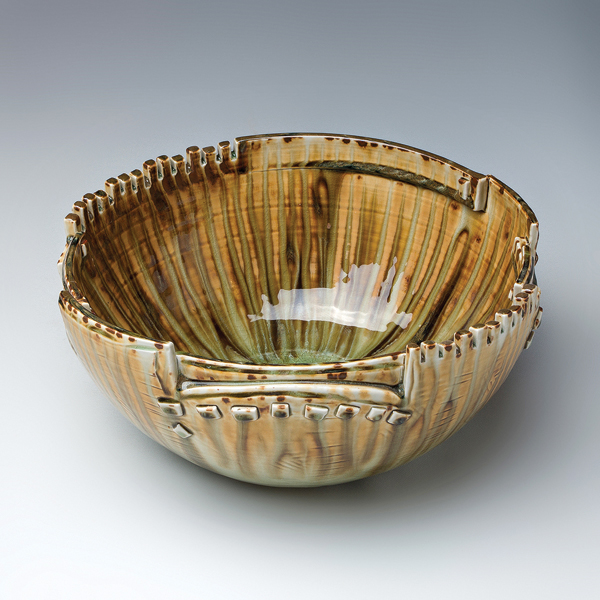 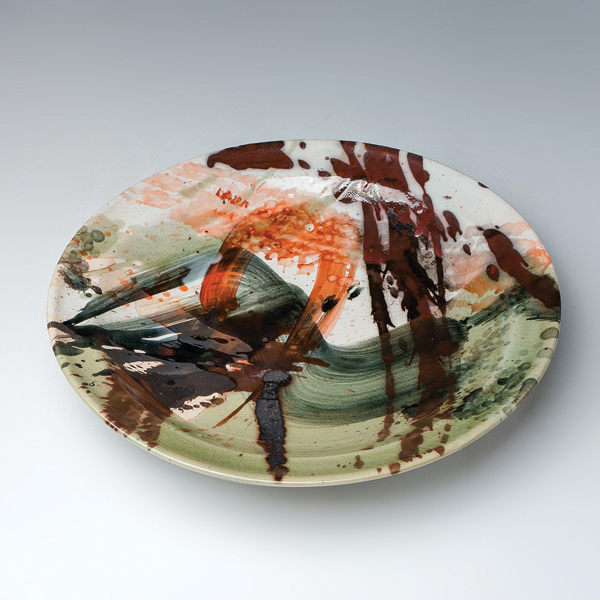 Initially, Merrie was ambivalent about our trip and encouraged me to go by myself. “I love my life in Braidwood—my home, my studio, my gallery, my friends, my garden. What will I do with myself over there for three months?” she asked Two months later, after our second night out to dinner with the Chaiyaruks family, Merrie would say to me: “You know, I could live here.” In large part her reflection was due to the warmth and generosity of people like those we discovered by chance at the Napangkoon pottery, in the city of Lampang that we had found, also by chance, in northern Thailand.

the author Greg Sugden is a potter living in Braidwood, Australia. Learn more at www.sugdenhamilton.com.