Appears in the June/July/August 2016 issue of Ceramics Monthly. 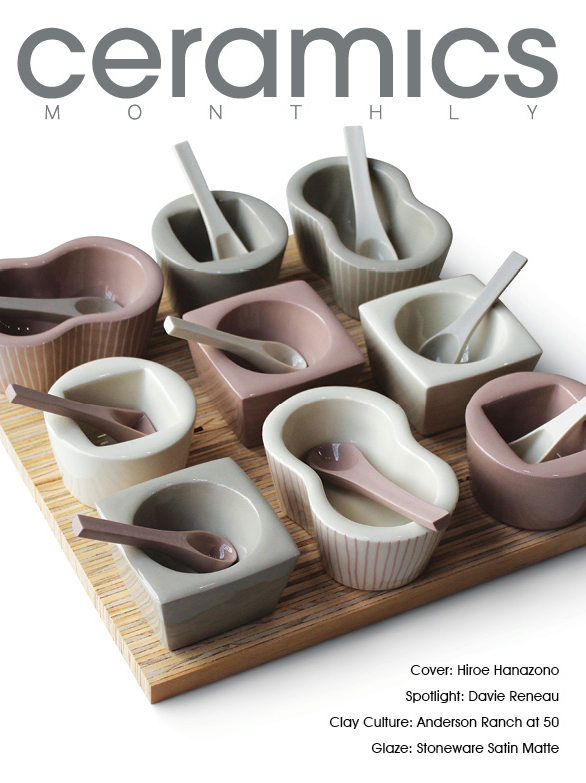 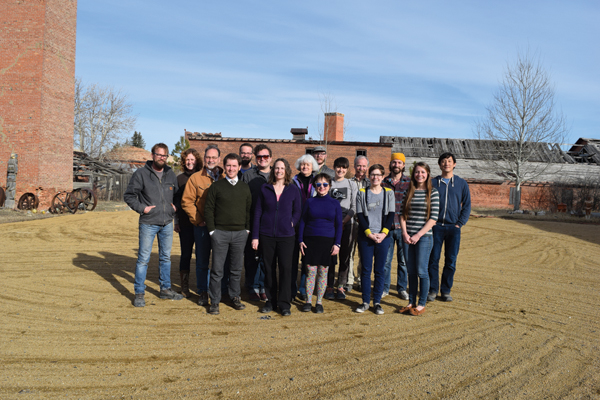 Find out how the Archie Bray Foundation for the Ceramic Arts staff planned its celebration of 65 years as what the founder and namesake envisioned as “a fine place to work.”

Most people have experience planning smaller scale celebrations or events at home or at work, but what does it take to plan a large anniversary celebration for an institution? We spoke with the staff at the Archie Bray Foundation for the Ceramic Arts (the Bray) about how their small staff organized programming for this year’s 65th-anniversary celebration, with events that take place throughout 2016. 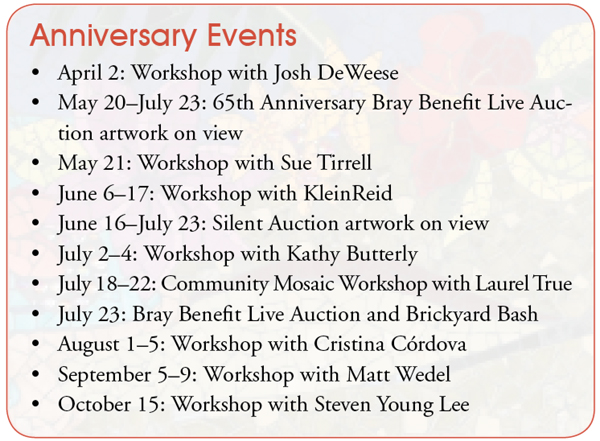 In the early stages of planning, the staff met on a monthly basis. They first agreed on the goals of the celebration, focusing on their relationship with the local community and honoring the history of the Bray and its impact on the field. They identified the intended audience—consisting of the local community, current and former residents, new and established collectors, and the many friends and supporters of the Bray. They decided who to invite as visiting artists for the year, focusing on people who are leading the field and pushing boundaries in their work. They also forwarded any ideas that needed additional funding approval to the board of directors.

Around one year prior to the anniversary the visiting artists (Cristina Córdova, Matt Wedel, KleinReid, and Kathy Butterly), mosaic artist Laurel True, and three Montana-based artists (Josh DeWeese, Sue Tirrell, and Resident Artist Director Steven Young Lee) were invited and scheduled to lead workshops. At this same time, the plans for an expanded version of the annual auction, a guided private collectors’ tour, and publicity were developed.

The Bray also relies on many individuals within the organization and greater Bray and Helena community for help with large events like this, both in anniversary years and on a regular basis. Communications Director Rachel Hicks explains, “The money raised at our auctions supports the Bray and the residency program. The current and past resident artists are often very enthusiastic about providing support for future residents by making donations of artwork to the auction, volunteering, and lending their skills to the event.” Since this year’s event will be larger, the number of volunteers will increase.

Hicks also added that current residents set a theme for the auction night’s celebration and help staff the event, often dressed in theme-inspired costumes. She shared that in honor of the anniversary celebration, this year’s theme, “’50s Flashback Brickyard Bash takes it back to the Bray’s beginnings with the Rock’n’Roll of Elvis Presley and Little Richard; TV shows like I Love Lucy and Leave It to Beaver; hot rods and drive-ins; and toys like Barbie, hula hoops, and Play-Doh.” 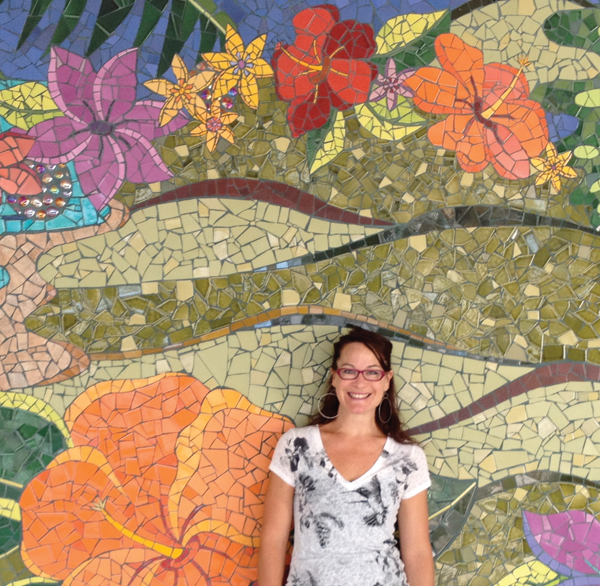 Local venues, past resident artists, and other area artists will expand the event by hosting open studio hours and sales that weekend. The Holter Museum of Art in downtown Helena and a few local galleries have scheduled ceramics exhibitions during the summer celebration. Peter Held, former curator of ceramics for the Arizona State University Art Museum’s Ceramic Research Center (ASU’s CRC) (as well as a former Bray resident), will host a group of collectors from the Renwick Alliance and ASU’s CRC to tour studios around the state as well as in Helena and at the Bray during the week prior to the auction. In addition, mosaic artist Laurel True designed and will install a large public mural in downtown Helena to commemorate the Bray’s 65th anniversary during the week prior to the Bray’s Benefit Auction as part of a community mosaic workshop. Participants will explore the methodology and techniques for approaching community-based mosaic projects.

Connecting History with the Present

The Bray staff has worked with past board member Ann Shaner—wife of the late David Shaner (one of the Bray’s early directors)—to develop a timeline of the Bray’s History. This visual timeline highlighting the people and events that have been pivotal to its growth will be installed in the entrance of the Bray’s David and Ann Shaner Studio building. Included in the timeline will also be a full list of past residents, visiting artists, workshop instructors, and award recipients.

The scaled-up Bray Benefit Auction and Brickyard Bash features artists who have a deep relationship to the Bray either as residents, board members, or visiting artists. There are 27 Live Auction artists who made work specifically for the occasion, including three unique collaborative works by Beth Lo and Steven Young Lee, Beth Cavener and Alessandro Gallo, and Sam Chung and Kurt Weiser. There are also 65 Silent Auction artists and 35 Cup Auction artists (each donating 2 cups). The evening will conclude with the Brickyard Bash, a dance and celebration that originated in the mid-1980s as a thank you to the community for their support of the Bray. The Bash will feature the Montana-based band Big Sky Mudflaps, who has played at the bash every year (ceramic artist Beth Lo is their multi-talented bass player). 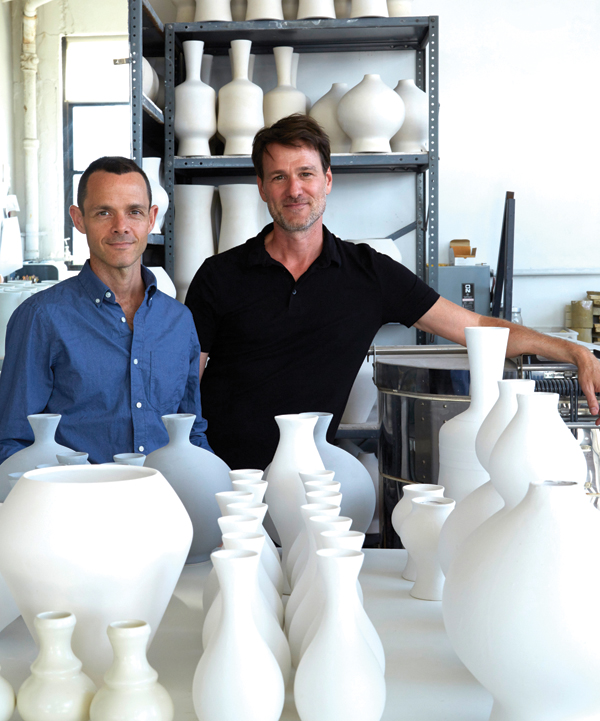 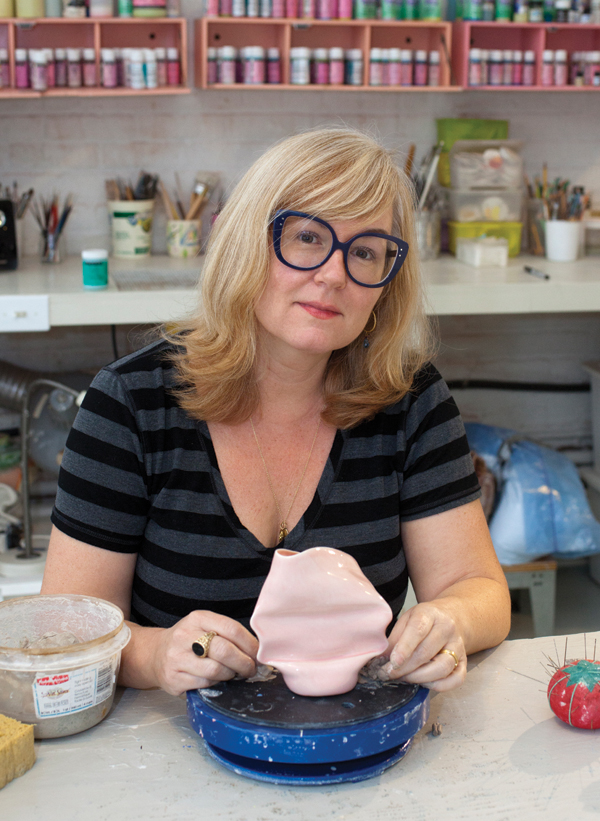 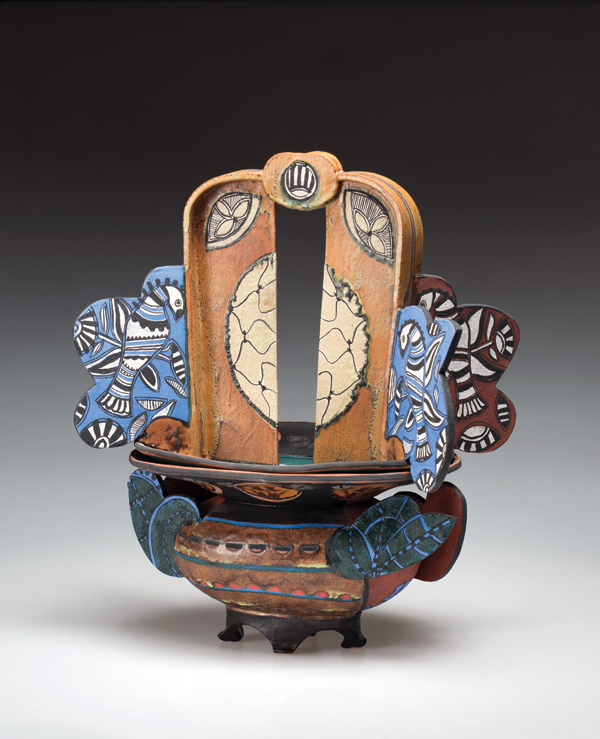 Due to the increased size of the event, the staff needed to use additional gallery space, change the exhibition layout, and extend the Live Auction exhibition by several weeks. They also ordered a larger tent for the July celebration, and hired extra staff during the months surrounding the event in anticipation of higher attendance from, the local community, past residents, and participants in the private collectors’ tour. This includes more seasonal help with processing work submitted for the auction, and a gallery intern for the summer to help with absentee bidding and day-to-day operations.

This year in addition to a print catalog, Hicks is also working with board member and Auction Committee Chair Tony Marsh to publish a digital version of the Live Auction artwork that can be shared more widely.