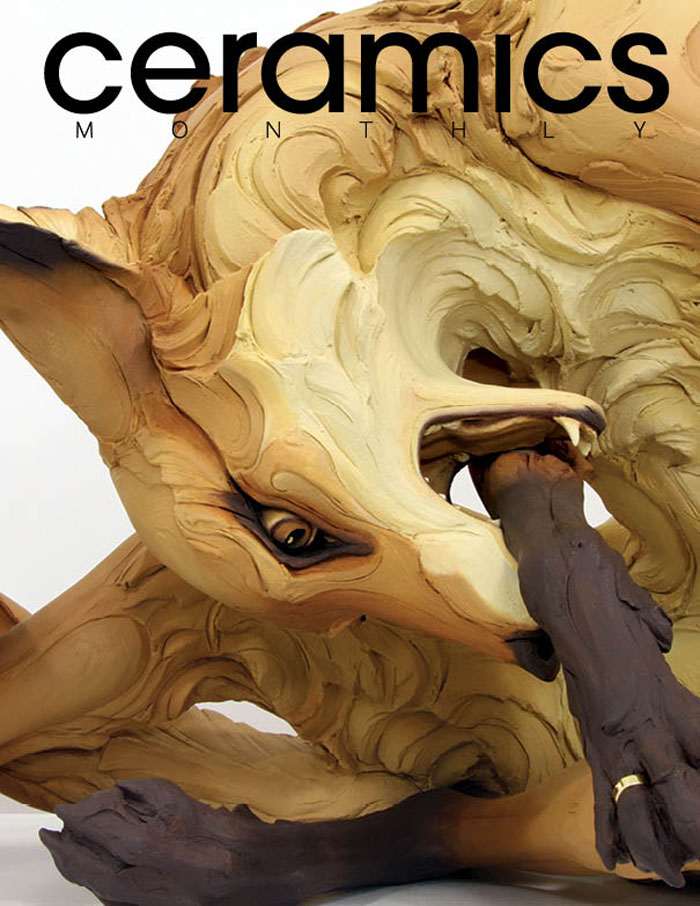 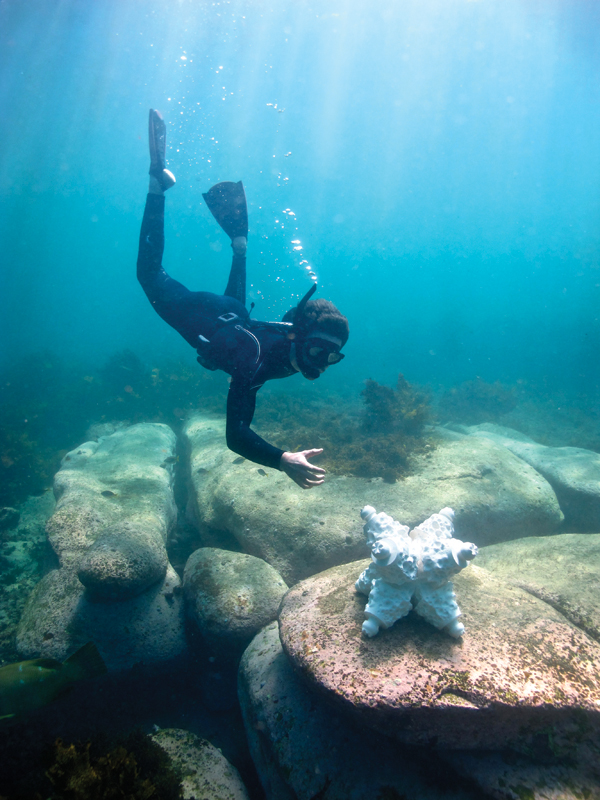 Like some ceramics, coral are incredibly brittle and fragile. Human activities, such as dynamite fishing and development projects and their effects—such as global warming and pollution—strain and damage these incredibly valuable and diverse ecosystems.

According to a NASA Earth Observatory article from 2001, human activities over the past 50 years have decimated an estimated 27% of monitored reefs, with another 32% believed to be at risk over the next few decades. Designer Alex Goad’s website states, “Unprecedented human population growth is putting increased pressure on our oceans, not only because of climate change and pollution, but also because of destructive fishing practices, increased water runoff, and dredging. Our irreplaceable coral reefs are some of the most biodiverse and uniquely fragile ecosystems on the planet, and consequently suffer the quickest and the most drastically from this human expansion.” To add insult to injury, corals take a really long time to grow. According to the National Oceanic and Atmospheric Administration, some coral, such as massive corals, grow at just 0.3–2 cm per year. Other types, like branching corals, can grow up to 10 cm per year, but even that growth is a snail’s pace. Starting from larvae, it can take up to 10,000 years to form a coral reef, and 100,000–30,000,000 years to fully form larger coral reef structures like barrier reefs and atolls—the Great Barrier Reef can be seen from space. 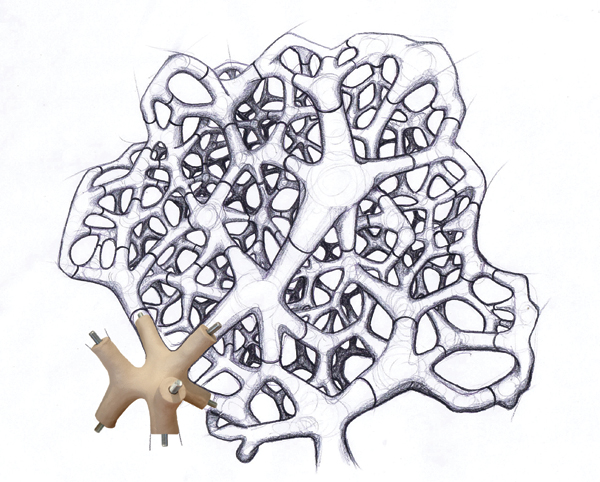 So coral repair is slow—but artificial structures, which the invertebrates can infiltrate and grow on, can help corals bounce back quicker. Those structures and efforts need to be simple, efficient, and affordable for implementation, especially in the remote island communities where the artificial structures are often needed. And that’s exactly where Alex Goad’s MARS project comes in. Goad has designed and fabricated a ceramic Modular Artificial Reef Structure (MARS) that can help damaged coral reefs rebuild at a much faster rate (1). “What may have taken 100 years to restore naturally can be reduced to an estimated 8–15 years using the MARS system,” Goad says in a Dezeen article. The project, originally designed during Goad’s industrial design studies at Monash University in Melbourne, Australia, is now being developed at Reef Design Lab, where Goad is a cofounder with marine biologist David Lennon. To provide coral with an appropriate and safe substrate material, Goad turned to ceramics to provide ample surface area and texture for corals and other marine life to inhabit and find refuge (2–3). 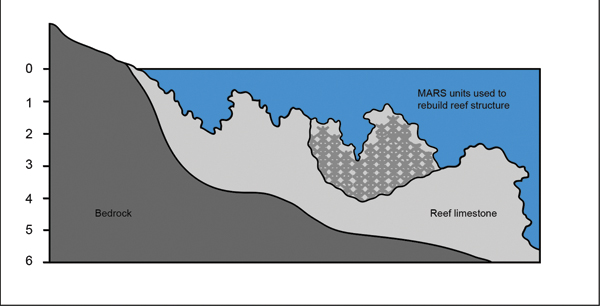 “The ceramic used is simply food-grade earthenware fired to 2012°F (1100°C), and we also use food-grade stoneware ceramic fired to 2192°F (1200°C),” Goad writes in an email (4). “Ceramic is known for its excellent ability to encourage sensitive marine organism colonization (5 and 6) and provides a porous surface for microorganisms to flourish . . . Ceramic has been used for years to propagate juvenile corals in aquariums, because its inert surface provides an ideal substrate material in lieu of carbonate rock,” Goad continues. “We tested the growth rates between ceramic and various other materials and found that ceramic always had better results.” 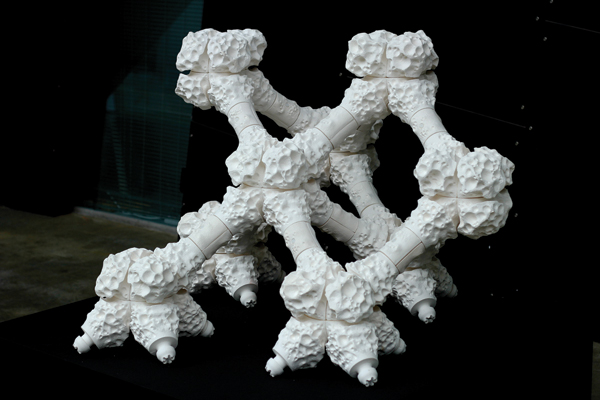 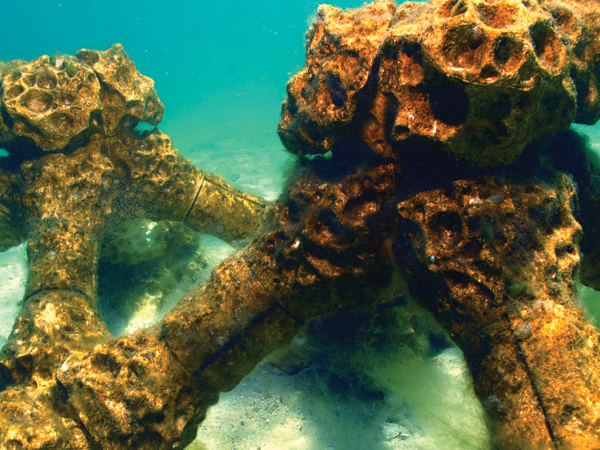 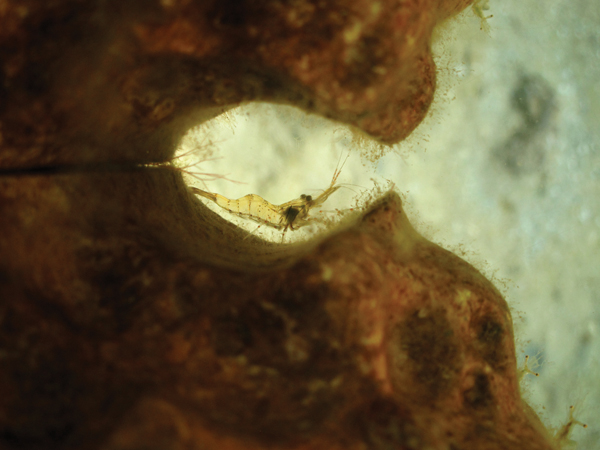 Goad constructs individual units from eight slip-cast, organic-looking ceramic arms. The ceramic shells are then filled with marine-grade concrete and composite rebar for added strength. Implementing these structures, Goad says, is no issue at all. “MARS solves these issues by creating a modular design that can be deployed from small boats and implemented by divers (see 1). This completely eliminates the need for heavy-duty machinery, drastically reducing costs,”  he explains. And because the system is modular, individual configurations can be easily tailored for specific projects and unique locations by snapping units together like Legos. The team has already tested several of their structures in marine habitats. According to Goad’s website, MARS systems are colonized by shellfish, shrimp, and small fish after just three months underwater. Reef Design Lab is also developing several other ceramic reef unit designs to provide new marine habitats, including one that is 3-D printed.

To learn more about Alex Goad and the MARS project, check out http://alex-goad.com. This article originally appeared in Ceramic Tech Today, http://ceramics.org/ctt.