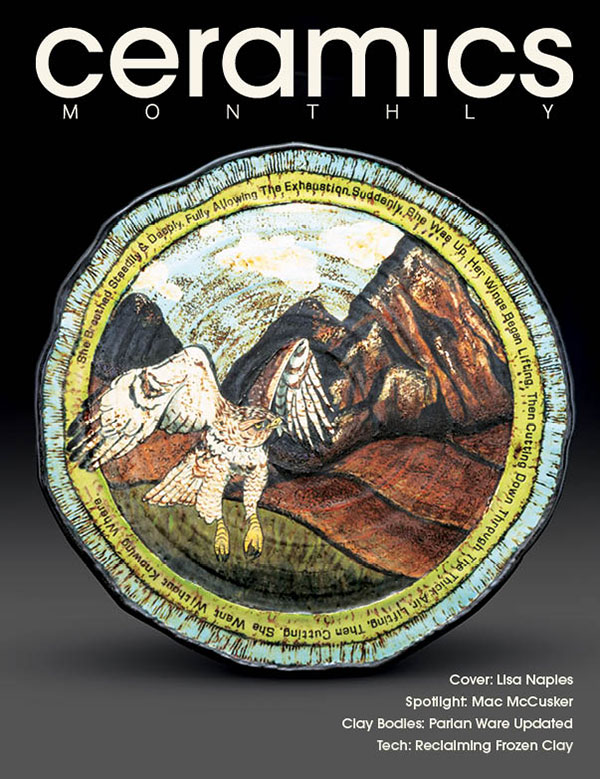 In my mind, I’ve been turning over and over Claire Curneen’s series of sculptures based on the story of Daphne from Greek mythology. These flower- and branch-bedecked figures reprise the story of an attempted rape: Daphne, a dryad, attracted the erotic attention of Apollo, who attempted to rape her. At the moment Apollo seizes her, Daphne’s father transforms her into a laurel tree. What I keep thinking about is the contrast, the dichotomy between the factual rigidity of Curneen’s porcelain and its contradictory visual softness and ductility. The way she makes this stiff material seem to soften and flow evokes the transformation from something mineral to something half human/half botanical.

Transitions and the Value of Change

Curneen’s work is an index of transience; a record of something about to happen. Via the medium of porcelain, she seems to document the movement of an idea from its cerebral inception to its passage through her hands. She focuses on mutability and the intensity of this focus represents a deep appreciation of beauty and the aesthetic value of change. It is a recognition of impermanence and the celebration of it. Using images drawn from myth and religion, her figurative works illustrate the way in which the actions of time and contemporary reinterpretation have shifted these stories into the present. Curneen’s work restages the relevancy of these ancient images and legends.

Because of the specific way Curneen works with porcelain and glazes, her work catches the transition from one form to another. There is no visual stability in her pieces; the surfaces seem to be in constant motion. This characteristic of shift is inherent to the materials and processes—porcelain shrinks on average 15% during firing to vitrification and also warps and twists in the heat—actions that she values; as she says, “firing is where the magic is.” Her figures are hollow and are consequently especially vulnerable to movement in the kiln. Her intentions are mirrored in these transformations. 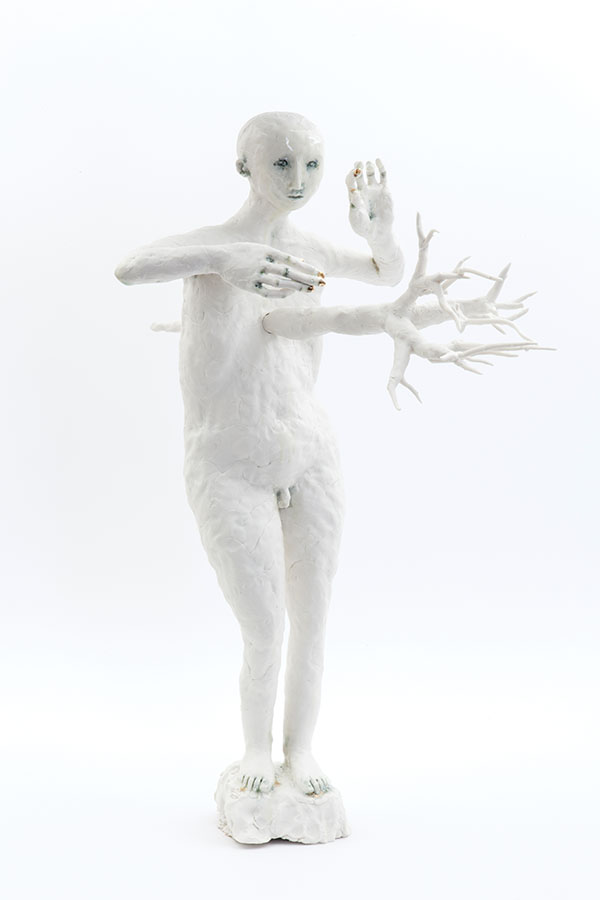 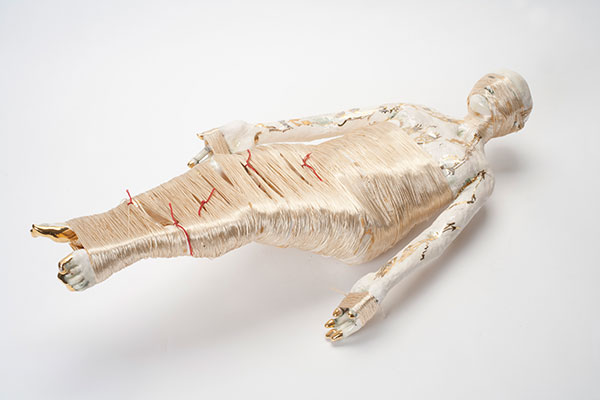 Aside from the narrative borne by her forms, her sculptures’ surfaces are a record of touch. Many artists gradually erase the traces of their own labor. Curneen does the opposite; she exposes her process, revealing every aspect of it. These ongoing surface modulations can be seen almost as a diaristic record of ideas—modifying in response to what the porcelain or stoneware communicates to her hand, what it resists, and what it accepts. Though infamously not plastic and easily overworked, in Curneen’s hands porcelain is stretched, folded, touched, and reshaped repeatedly. The surfaces remain fresh, literally blooming with leaves, folds, creases, and petals. One contour blurs into the next, its passage from one movement to the next smooth or jagged, but balletic. The scale of her work in relation to this kind of detail is significant. Her technical achievement in this difficult medium can’t be overstated.

Finding Inspiration and Developing a Narrative

Curneen’s work is deeply narrative, concerned with exploring interiority and material qualities as well as bringing her work beyond the tangible. She feels that the stories her work tells are open-ended, concerned with the nature of belief and what it is to be human. She begins with no specific idea or image. Her works develop out of a response to the clay. As she works it, shifting the porcelain around, she begins to have associative thoughts that evolve into an image bearing a narrative. 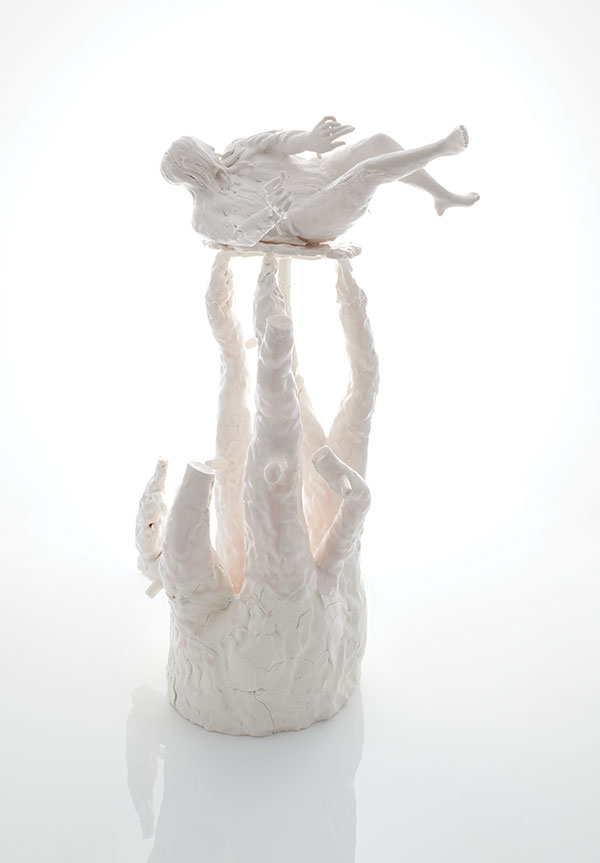 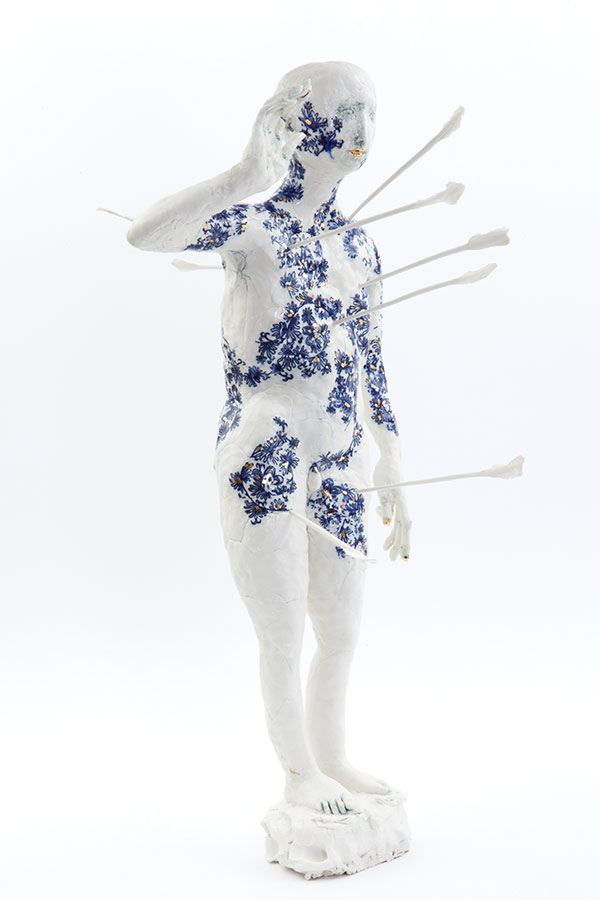 Curneen’s background is Irish and Catholic. Her childhood education filled her mind with stories of martyrdom and with the old pre-biblical Greek and Roman myths and legends. She has also been deeply influenced by the works of Greek, Roman, and Renaissance painters and sculptors dealing with religious or mythological themes. Her influences are wide-ranging and not all visual; she has been specifically moved by the novels of her country woman Edna O’Brien. Her work is also inflected by her contact with Bernini’s St. Teresa in Ecstasy and his Apollo and Daphne, Mantegna’s painting of the martyrdom of St. Sebastian, Johann Joachim Kändler’s Meissen porcelain goats, and Archimboldi’s alchemical paintings. She has also been much influenced by porcelain’s history—dining sets, Meissen, the Dresden Porcelain Collection in the Zwinger Palace, and the ceramic collections in the Victoria and Albert Museum. She has been particularly interested in the work of contemporary sculptors such as Viola Frey, Doug Jeck, Rachel Kneebone, and Takeshi Yasuda.

Curneen’s titles often reveal her narrative but even if you are unaware of the specific stories she makes reference to in her titles or images, the depictions are so striking, dramatic, and expressive that they speak volumes for themselves. Connecting the images to the stories deepens the experience of the work. Each piece can be put in the context of how these images have changed and developed over their long history, and how a contemporary artist recounts these ancient stories. Her use of the past, its icons, and techniques projects itself into a range of objects that are unconventional and bear a kind of ancestral complexity. 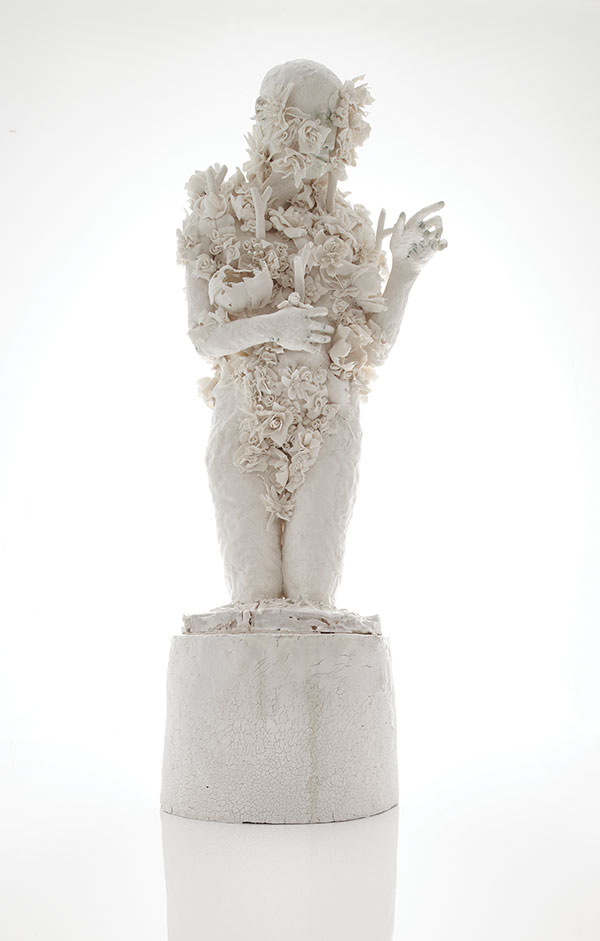 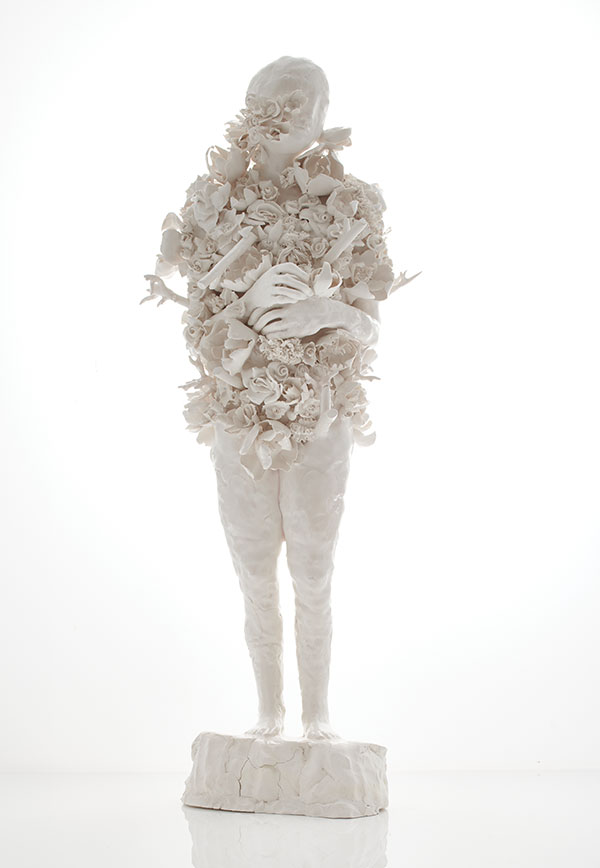 Although many of Curneen’s pieces are inflected by suggestions of sorrow, pain, and suffering, many of her figures specifically reference martyrdom. In works such as Over My Dead Body and St. Sebastian, she employs the imagery associated with the martyrdom of St. Sebastian, an early Christian martyr who was initially tied to a tree and shot with arrows. These figures are glazed with splotches of blue and gold, a particular use of coloration associated with Delftware and other forms of functional porcelain as well as with the Christian religious significance of the color blue and the distinction accorded the use of gold. Curneen is also fascinated with ecstatic states—numerous figures that seem seized with wonder. In pieces like Blanket and Rise, she implies an experience that is primal and rapturous, feared, celebrated, and wished for. This is achieved through the facial expressions and the play of light across the surfaces.

The pieces in which she conflates the female body with nature are among her most powerful. After Archimboldi II, Still Life (porcelain), and Still Life (stoneware) represent figures whose upper bodies are paved with various kinds of flowers in different stages of life: buds, full blossoms, and blooms bearing the onset of decay. Because these all are linked to the Daphne myth, there are also twigs and branches sprouting from their torsos. The floral motif originates not only in funeral wreaths, but also in the decorations found on the domestic mantelpieces of 1960s-era homes in Ireland. The use of stoneware and slightly pink glaze of Still Life is an exception to her general practice. She used stoneware in this instance, as “it would not warp too much, which would be a nightmare when using glaze; leaning against the kiln wall would be disastrous for the work.” These three figures also recapitulate the history of figurative ceramic portraiture. One is represented from the waist up, the next as a full figure on a small pedestal, the last as a three-quarter figure—from head to knee—on a taller pedestal. Together, these combine the characteristics of many eras of statuary, in much the same way Curneen’s use of religious and mythological iconography bridges the centuries. 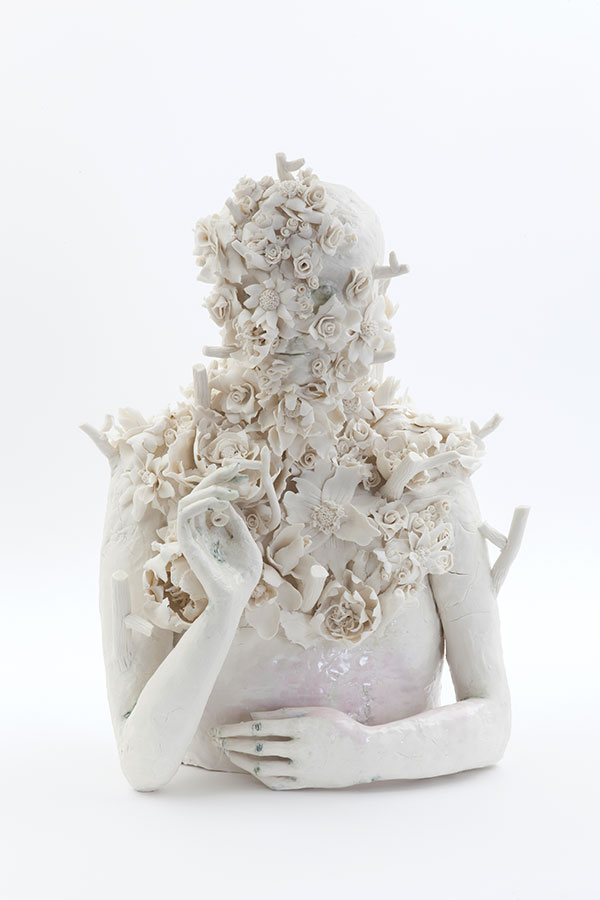 Born in 1968, Claire Curneen completed her MA in ceramics at Cardiff Metropolitan University where she presently teaches in the masters course. Through her undergraduate years, she developed an approach that was rooted in ideas and then material. Curneen’s work been exhibited internationally. Aside from commercial galleries, her work has been on view at the Boston Museum of Fine Arts; La Ferme de la Chapelle, Switzerland; in the 1st European Ceramics Competition, Greece; Kunstforum Solothurn, Switzerland; Taiwan International Ceramics Biennale; Taipei Ceramic Museum, Taiwan; and the Mint Museum in Charlotte, North Carolina.