Appears in the May 2017 issue of Ceramics Monthly. 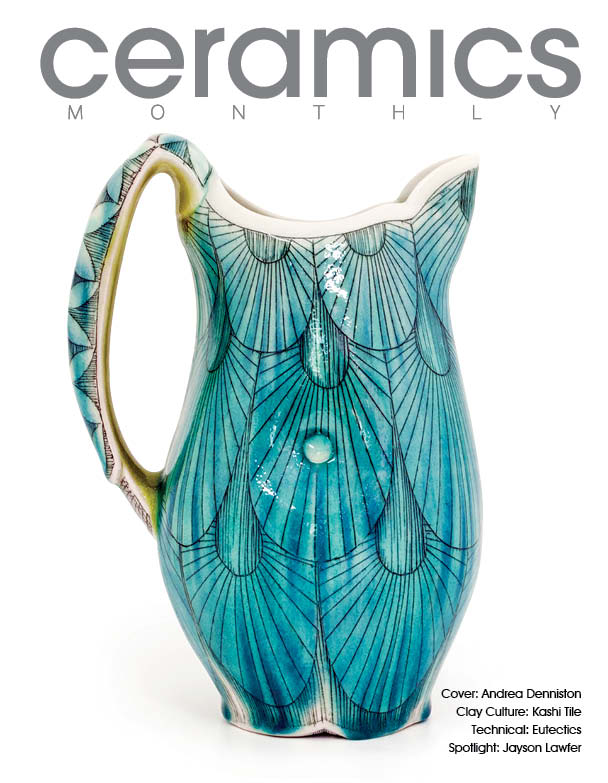 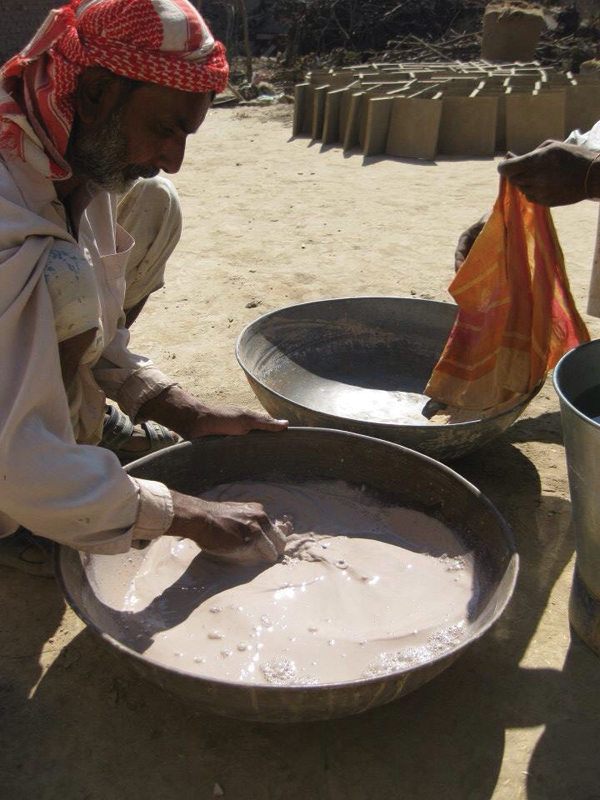 The effect created on building façades and the interiors of holy spaces using intricately painted ceramic tiles made in the kashi tradition in Pakistan is one of ornate beauty and grandeur.

The production of kashi tiles is one of the oldest handicrafts in the province of Sindh, Pakistan. The word kashi means painting, and the tile tradition that carries this name originated in Iran and Iraq, which are the main centers of this traditional art. The artisans who make these tiles in the Sindh region are known as kashigars.

These tiles are named for the fired appearance, a glaze that produces a shiny,  transparent, somewhat crystalline layer over colorful metallic pigment designs painted on white-slip-coated earthenware tiles. The basic job of kashi making resembles that of a traditional potter in terms of production processes. 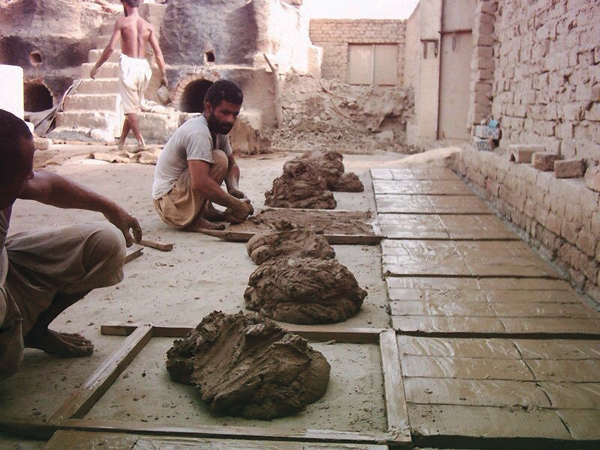 The cities of Nasirpur and Hala in Sindh province are known as the centers of this craft, and the required high-quality clay, taken from river basins, is easily available in both cities. Of the two, Nasirpur has more history and expertise in this form of tile making, because it has been a trade hub for centuries. It was also easier to make and then transport the tiles from Nasirpur, because in addition to being a kashi tile and pottery center, it was also a large center of production for traditional handmade textiles goods. At its peak, historical Nasirpur extended three square miles in area.

Today, the textile handicrafts are almost extinct in Nasirpur, but there is still kashi work going on, although it is losing its previous prestige. In the past, kashi was an important and essential decorative element on mosques and shrines, but modern ceramic tiles have eclipsed this old tradition. It’s a fact that the modern, manufactured ceramic tiles are more durable and perfect, but kashi tiles have more lusters and a greater variety of designs and patterns. When looked at from a distance, the handmade kashi tiles are more impressive and beautiful. 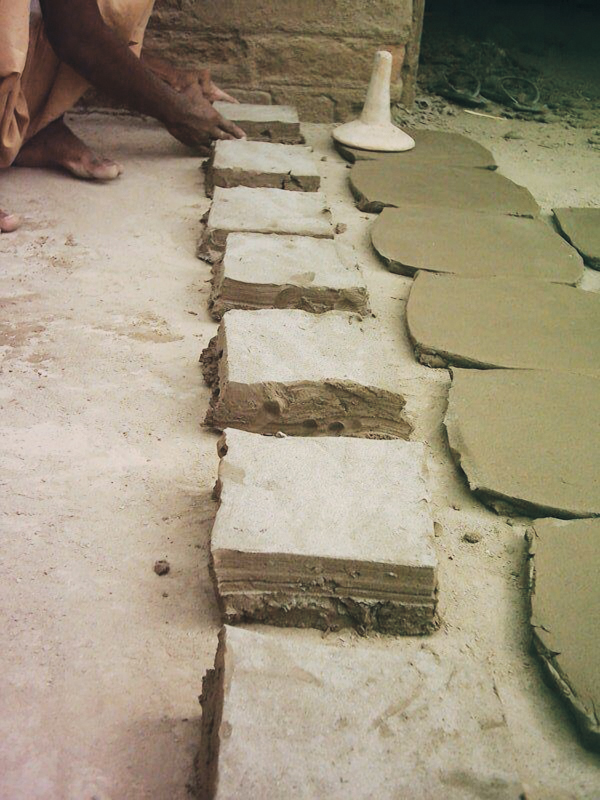 The basic materials used for making the tiles are local clay and water. Kashi tiles in Sindh are made of the best kind of clay that can be sourced from an old river basin. Two kinds of clay (white and red) are used in making different categories of tiles.

Both kinds of clay are mixed in equal amounts; however the red clay is comparatively harder than the white clay. The local people bring clay from a nearby village on donkey carts. The freight charges for the clay delivery are $1.90.

To clean and prepare the clay, the kashigars first firmly hit the clay with a piece of wood in order to make the clay even and break up the clumps of hard clay that are always present in it. Then they pass the clay through a channa, which is a wooden frame with a wire mesh or screen stretched over it. The channa’s wire mesh only allows clay of a certain size to pass through, so the resulting clay is very fine. In local terminology this refined clay is called khishka and it is used while mixing the clay. The ratio of clay to water is 1:3, which means that about one pot (garha) of clay requires three to four garha of water. When the clay reaches the right consistency, the kashigars let it rest for roughly a day before using it for making tiles. 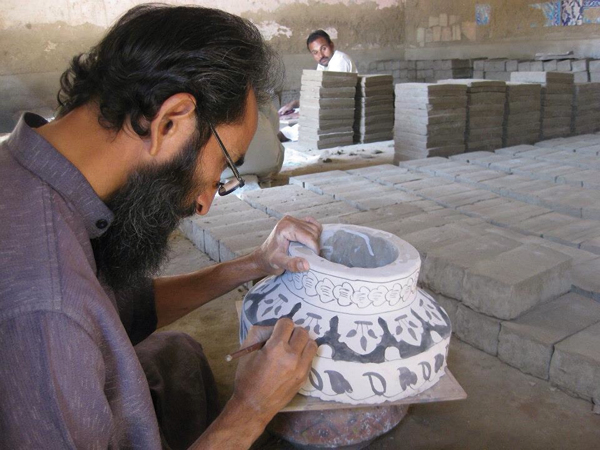 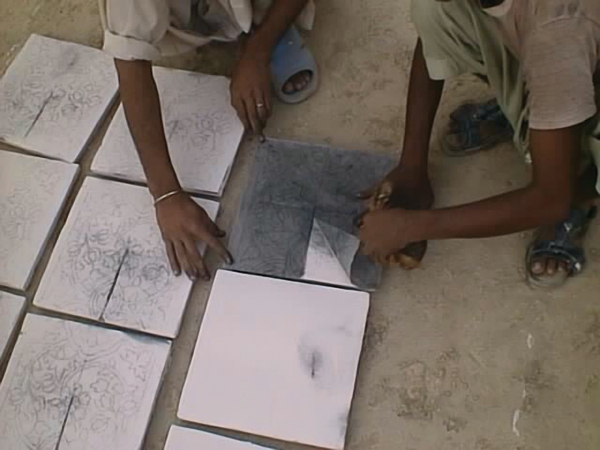 The craftsmen use different materials and painting techniques on the tiles to create decorative motifs related to Sindhi culture. Raw materials include sunehri, which is sand collected from the riverbank, and sutlej, which is sand that is finely ground and mixed with water to form a golden paste. The sutlej is then applied to the tiles to create designs on the surfaces. Commercial color pigments are brought from Karachi. They are different colors i.e. neon green, neon pink, neon yellow, white, and black (usually primary and secondary colors are used. The blue color is used for outlining). The white slip used is clay that is brought from Sehwan Sharif City. After purifying this white engobe clay by straining it through a thin cloth and finely grinding and mixing it in water, it is applied directly to unfired red clay tiles. This gives a green and golden shine on the tiles. The sutlej paste and white slip are then fired on. 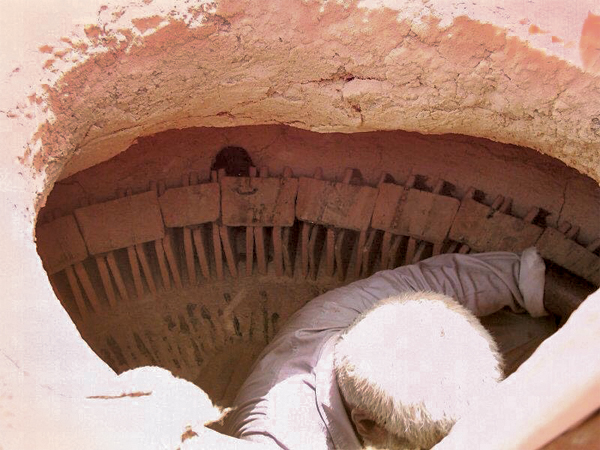 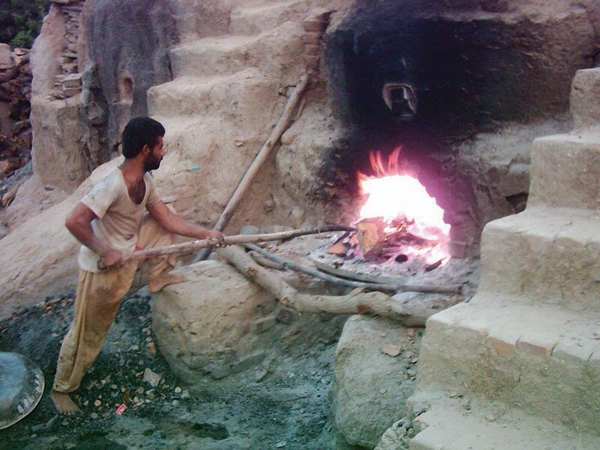 Two types of painted tiles are found in this area: one is multi-colored tiles, which are made using different stain and oxide colors and the other is thick, white-slip-painted red tiles. The multi-colored style tiles have two kinds: kacha rang and pakka rang. Kacha rang tiles include color applied to the tile after it is fired in the kiln. This color is not permanent or waterproof. The tiles painted with this technique are just for decoration. Pakka rang is a permanent decoration, and usually consists of blue-and-white painting, with colors outlined in black. The painting is then coated with glaze and fired. No over decoration is done on these tiles; this is something the kashi makers are very particular about.

The raw material for the paint brushes used by kashigars to outline decorative elements on the tiles includes goat hair, thin round sticks or dowels, thread, and cotton. They tie the goat hair or cotton onto the end of the round stick and secure it with the thread. Brushes for other parts of the process are purchased from market, including various round brushes with soft hair. 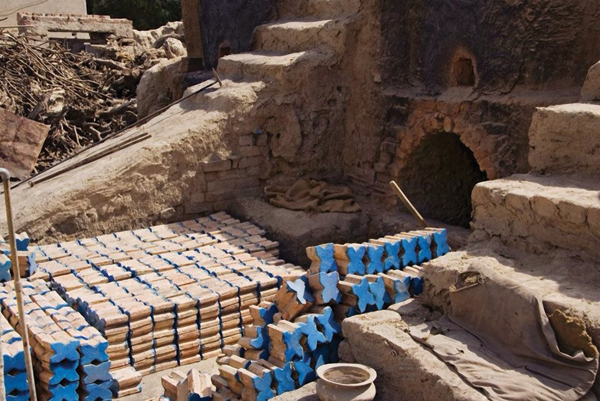 Glazing the ceramics tiles not only gives them a shiny surface, but also seals the clay to prevent water from permeating the tile. Traditional tiles are made using different kinds of glaze, including lead glaze used for low-temperature processes (1562°F (850°C)), and other transparent glazes for tiles to be fired to higher temperatures—up to a maximum of 1832°F (1000°C).

Glazing that is done in Gujarat and Lalamusa cities uses glass and water as the two raw ingredients. The transparent glazes are made using materials including borax, red lead, quartz, silica, and sand. These material are mixed together then transferred to a round-shaped clay bowl, then fired in a kiln to 1742°F (950°C). After firing, the glass frit is broken into smaller sized pieces then ground to make a powdered glaze, which is then mixed with water to form a paste. The paste is applied over the tiles and they are fired between  1562°F (850°C) to 1832°F (1000°C).

After the tiles are painted, they are left to dry completely before being loaded into the kiln and fired. The kilns used are roughly 10–12 feet high, and they can fire up to 300 tiles at one time. Each firing takes 14 hours and (2000 kg) of kari wood—a dry, hard, black wood, followed by cooling for 48 hours prior to opening and unloading the kiln.

In Pakistan, people usually use both red- and white-clay kashi tiles for decorative purposes in public buildings, on the front elevation or façade, and interior walls. The tiles used in shrines for decoration include traditional floral patterns, Islamic calligraphy, and those with carved relief. Additional uses include covering the walls of houses, offices, and mosques for decoration. 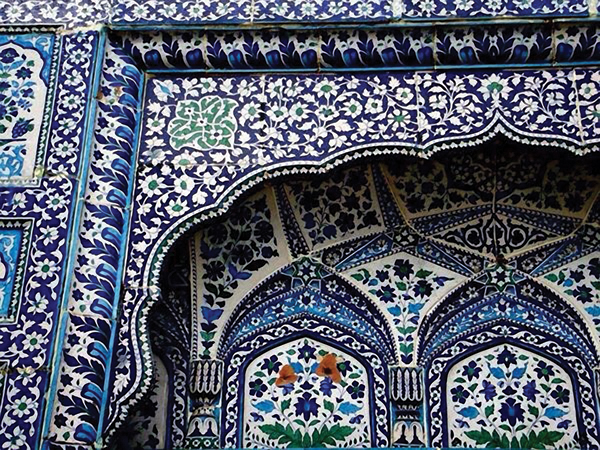 Rural people used these decorative tiles for roof coverings. There is also an international interest, with decorative tiles being exported for display in exhibitions as well as traditional uses.

the author Muhammad Hassan Kashigar is head of the ceramics department at the Centre of Excellence in Arts and Design, Mehran University of Engineering and Technology, Jamshoro, Sindh, Pakistan.