Appears in the June/July/August 2018 issue of Ceramics Monthly. 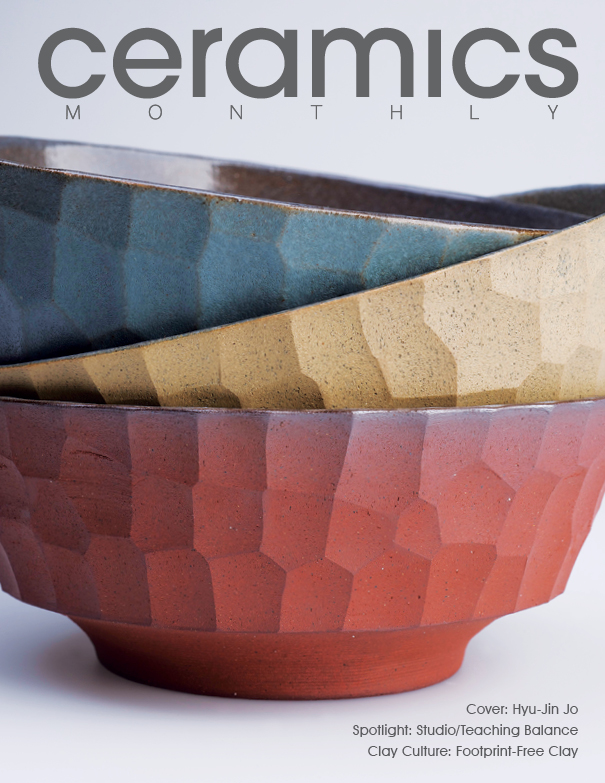 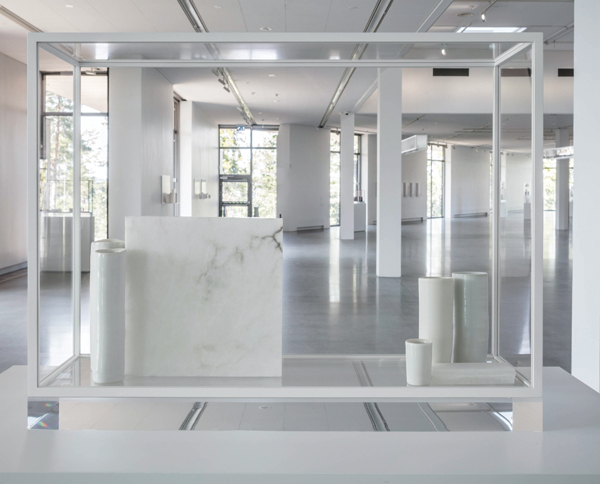 One arrives by ferry. The dark pines rise up from the water’s edge, sheltering from view the light-filled art museum at the top of the hill: Artipelag—its name an amalgamation of Art, Activities, and Archipelago. One of Stockholm’s foremost attractions, Artipelag is a privately-owned art space renowned for its boundary-crossing art exhibits.

Both artists—one a painter, the other who calls himself a simple potter (despite being able to boast solo shows at the Royal Academy in London and the Rijksmuseum in Amsterdam, not to mention holding the title of Officer of the Order of the British Empire)—share a singular vision that spans decades of laser-focused practice. 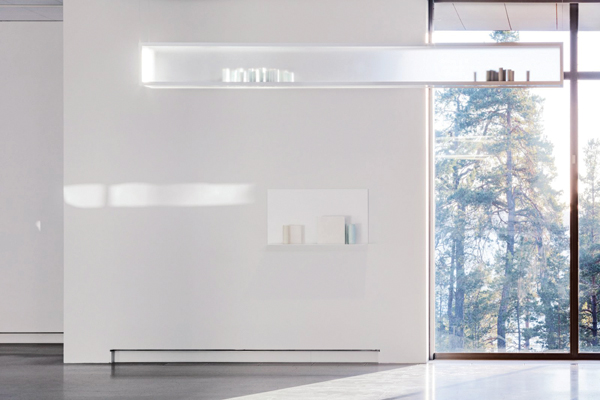 Matching a goliath like Giorgio Morandi with a partner of equal intellectual and creative gravitas is a risky undertaking, fraught with the potential for negative comparisons. The frenzied global interest in Morandi (1890–1964) and his oeuvre is relatively recent in art-historical terms. Morandi is the antithesis of today’s brash, attention-seeking artists who are compelled to produce shocking works in a bid to get noticed. The most shocking thing about Morandi is the fact that, for over 40 years, he rarely left his family home in Bologna, Italy. There, he created a prolific body of work almost exclusively representing the same dozen or so household objects. This world of things is full of small epiphanies, wrote Morandi, who is now considered the greatest Still-Life painter of the 20th century.

In Edmund de Waal, the curators found an inimitable partner for Morandi, although the former accepted the mantle with some trepidation: “I struggle to find the right word. Conversation, dialog, homage, installation, and intervention are such harsh art-world terms. I feel great anxiety and tenderness about bringing my own work into such proximity with Morandi.”

Edmund de Waal was born in England the year Morandi died. Coincidence or a ghostly passing of the baton? Both artists found a lifetime’s worth of contemplation and inspiration in groupings of simple objects. The words serene, otherworldly, ethereal, aesthetically rigorous and conceptually abstract can be interchangeably used to describe the works of both men. And aside from sharing a restrained palette, there are other uncanny overlaps: de Waal’s medium of choice is porcelain, while many of the vases, bowls, and lidded containers painted by Morandi were made of clay.

The exhibition begins in an immense, white-cube space designed to accommodate massive installations, but instead is dedicated to de Waal’s encased groupings of monochromatic, understated little pots. A small Morandi painting hangs alone on a dove gray wall, a taste of what is to come. The artful layout veers dangerously close to the sort of undesirable preciousness that activist and potter, Ayumi Horie, calls “the prissy untouchability of a china cabinet” were it not for the historical and personal significance that de Waal invests in each bowl and vessel. 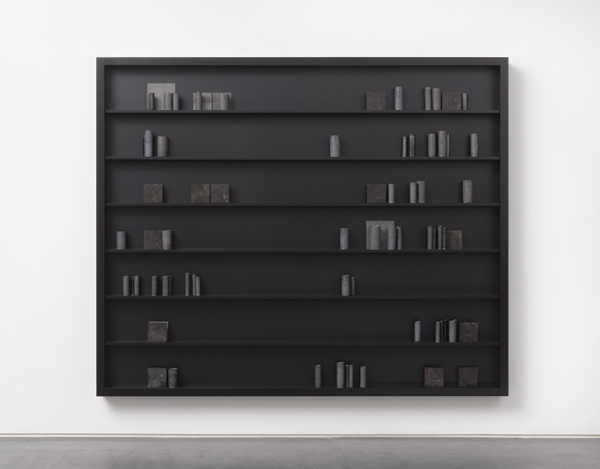 “I’m asked again and again about why I make vessels again and again. Why sit low-down on my potter’s wheel . . . turn to my left and pick up a small ball of porcelain clay, throw it into the center of a revolving wheel, wet my hands, bring them together over the clay and start another vessel? Don’t you get bored? I’m asked. They are so simple, just cylinders, a few centimeters high, barely inflected forms a slight change of energy at the rim. You use the same clay, the same wheel, the same few tools. My answer is that to spend time is to explore time,” de Waal explains.

De Waal does not restrict himself to conventional framing devices. One of the most thought-provoking works was a cluster of rectangular pillars, solid below mid-point, with frosted glass above, so that the top half of each monolith revealed shadowed silhouettes of vessels enclosed within. Similarly, ceiling-suspended, frosted glass containers allowed the viewer to glimpse the darkened underside of the pots hoisted up high. These translucent shapes are as close a visual rendition of dreams and memories as one can get; fleeting glimpses of blurred shapes that fail to totally materialize, remaining firmly out of grasp. 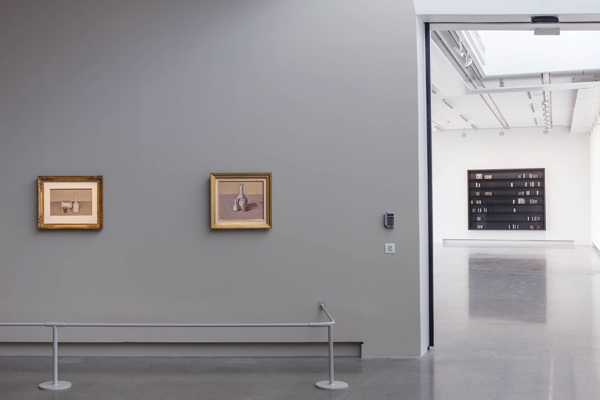 Throughout the exhibition, there is an implicit tension between the tactile nature of pottery that begs to be fondled and used, and the conscious distance imposed by de Waal’s vitrines. In many of the works, de Waal has juxtaposed neatly hewn slabs of iridescent onyx or marble amongst the delicate, paper-thin porcelain pots. The potential for the former to crush the latter introduces a subtle power play between materials. One such grouping, displayed on a simple L-bracket shelf, creates a tableau of the most exquisite simplicity that somehow manages to be more than the sum of its parts. Three precisely cut slabs of white marble almost conceal a small porcelain plate resting upright against the back of the shelf. The tableau glows mysteriously as if lit from within, until one approaches and sees that de Waal has glazed the back of the plate with gold so that it casts an ethereal light on the white objects, and creates a diffused golden shadow. 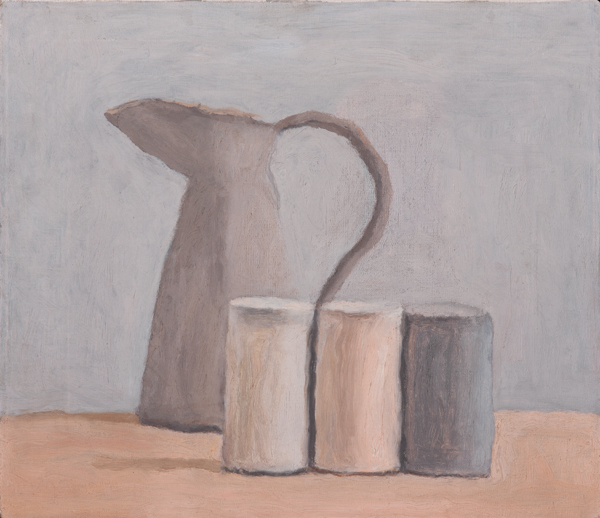 The titles that de Waal selects for his still life assemblages—the reader, music in thirteen parts, another hour—hint at the artist’s other creative channels. Even if one did not know that he throws his repetitive forms on the wheel while immersed in the sounds of music, there is a semblance of musical score in the way that the pots are arranged inside their vitrines. De Waal has composed his own mélodie en porcelaine. Imagine the shelves to be the horizontal lines of musical score and the pots, the notes. An accomplished author, de Waal imbues his work with literary context as well as verbal expression. Snaking across one of the gallery walls, a long string of sentences, transcribed by the artist himself, convey his personal thoughts about Morandi. 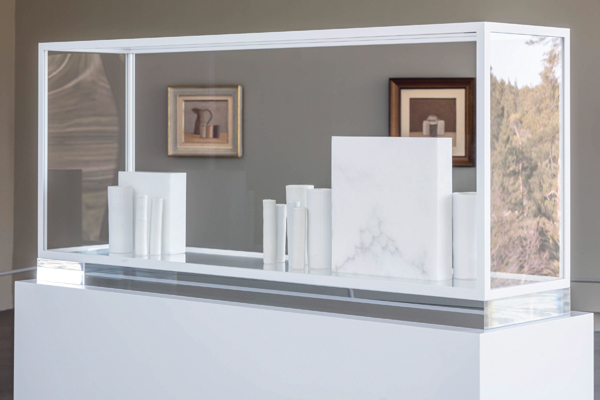 In Paul Mathieu’s review of de Waal’s newly published monograph, he asks the question most of us surreptitiously wonder: What is de Waal’s secret to success? After all, this is someone whose whole work could be summarized, glibly yet correctly, as that of a potter who makes blank cylinders placed on shelves. I believe the reason may lie in the promise of endless possibilities—found in de Waal’s use of repetitive porcelain forms as well as Morandi’s obsessively re-configured still life groupings. This exhibition exemplifies the dignity of simple objects and the rich rewards gained from slowing down, treading softly, and living mindfully.

the author Lilianne Milgrom is a multi-media artist and writer on the arts, and a devotee of Georgio Morandi—exhibiting a solo show entitled “Milgrom on Morandi” in 2009. To learn more, visit www.liliannemilgrom.com.