Appears in the March 2018 issue of Ceramics Monthly. 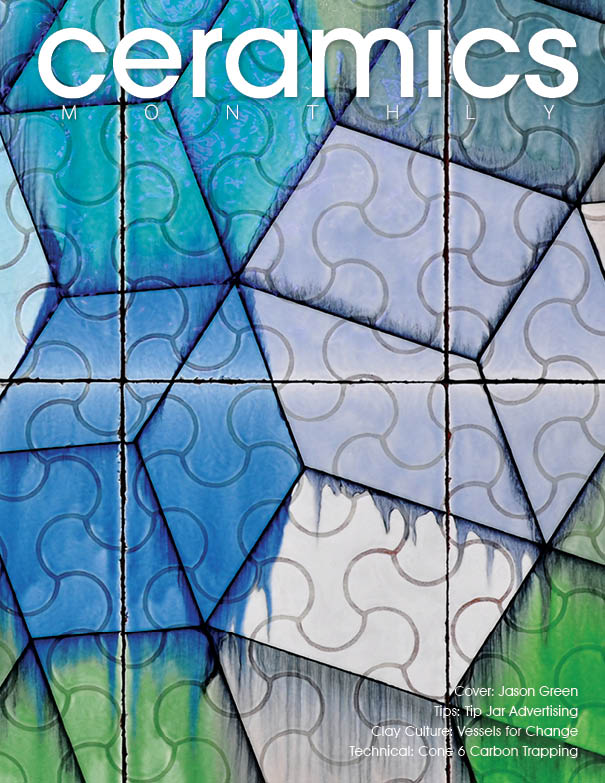 My profession as a journeyman potter in Seagrove, North Carolina, began right after college, which was where I had my initial introduction to clay. Upon finishing school, my potential choices for further education included residencies or graduate school, but I was ready to get my feet wet. I had heard about Seagrove, a small, rural pottery community (with the highest concentration of production pottery shops in the country) that is steeped in traditional as well as contemporary ceramics and has a mighty tourist industry. I knew this was the place to go.

I sent out an email to all of the shops that had listed their email address on the Discover Seagrove (https://discoverseagrove.com) website directory explaining my background and my intentions to work as a potter. I received a response detailing the prospect of a journeyman potter’s work, which explained that a potter could get paid to travel to the different shops in the area and make pots for them. I figured since I had made literally dozens of successful pots while in school that I should be able to jump right into this. Well, it wasn’t that easy. ...and Everything in Between

The journeyman potter is a local profession that developed from the slow build up of generations of potters in the area. Much like an independent contractor, the journeyman works out an exchange of services with a pottery shop, and uses the shop’s facilities to complete the assigned task without being on a payroll. The shop you visit provides the clay and the wheel and then presents an example pot of theirs that they would like you to duplicate—be it a mug, bowl, etc. Some days a shop may need all mugs or all plates and some days it may need a mixture of forms.

After cutting up your day’s worth of clay balls, you spend however many hours it takes to fulfill their request and the shop does the rest; trimming, handling, glazing, firing, etc. Since the pots they’re having you make are their own forms, it is feasible to outsource the wheel-throwing labor and then finish the pieces in-house. Payment is based on an agreed upon per-pound rate, which means you’re paid by however many pounds of clay you throw that day as opposed to an hourly rate. Of course the poundage per pot fluctuates anywhere between a one-pound mug to a six-pound vase, and everything in between. Learning on the Job

I secured a loft apartment in Seagrove and got to work. Initially 2–3 shops had given me a chance; they were kind enough to coach me along during the headaches and attempts to make more than 20–30 small pots a day. Some shops had given me a chance but never called back, which was disheartening but understandable. My skill level was certainly nowhere near where it needed to be to make a go at this, but a handful of potters, some of whom I still work for, had recognized some potential and encouraged me to keep going.

I was given tips to practice at home after work, such as using a timer to track my speed, or making as many mugs as possible in one sitting and then scrapping and re-wedging the clay to start over the next night. It was a rough start and I heard the occasional quip that I probably wouldn’t last, but I couldn’t imagine that it had been any more difficult for anyone else who had become successful at this, so I kept at it. 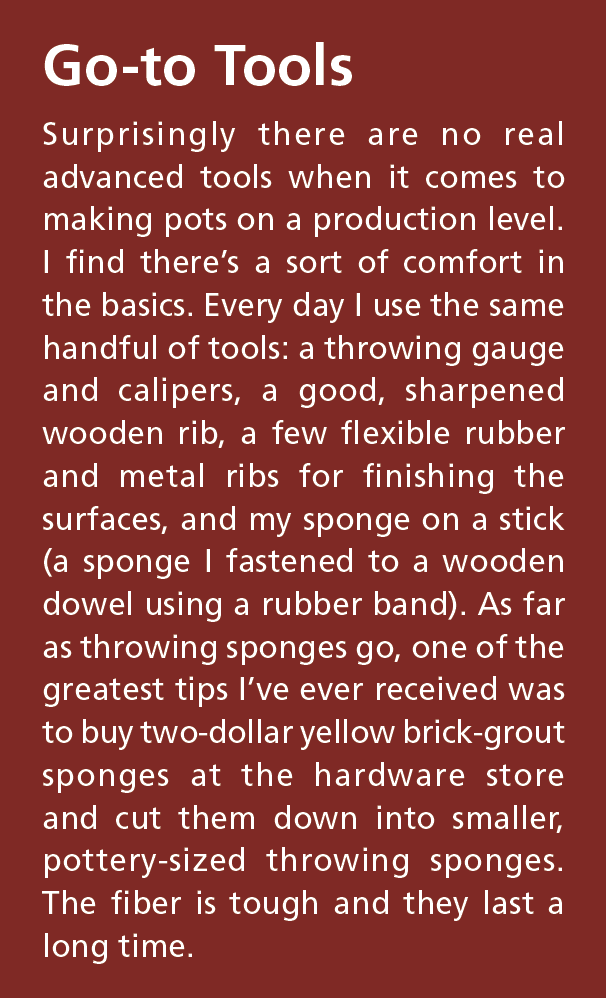 Learning and Growing as a Potter

I made it through the first few years of struggle and came to understand the sense of generosity and focus on helping others that is common in the Seagrove community. I had befriended the few other journeyman potters in the area, which at any time usually averages about 3, as well as all the other shop owners. As I was able to expand to working for other shops, I started to realize the invaluable amount of further ceramic education I had been receiving. Aside from understanding the necessity of working on a stand-up wheel—nearly everyone I work for throws this way—I learned how to throw with more fluidity and efficiency, how to make my own tools, and how to cut back on even the smallest redundant steps (see sidebar on page 43), saving time in the long run, all without losing a sense of quality in the pots I was making. My position was comparable to paid apprenticeships with several accomplished potters at multiple locations. I was working for some of the best potters in the country while they taught me nearly everything they knew about how to make pots. While still by no means at their level, I strive to be nonetheless, and thoroughly enjoy my position here in Seagrove.

In my 15 years as a journeyman potter, I have worked for over 16 different shops and currently work for 5, with one day per week scheduled at each shop. I limit myself to throwing between 100 and 150 pounds of clay per visit and I can make my own hours, which for me is still my favorite aspect of the work. Some of the larger shops that I have worked for will have up to 3–4 potters as well as teams of decorators, but most of the shops are comprised of independent artists and partners who usually have a full-time employee to help with other tasks such as loading and firing kilns, along with gallery sales. Since Seagrove generally has a tourist-based economy, business can be seasonal and my job can be subject to this ebb and flow; however, the handful of shops I am working for lately have several wholesale accounts with multiple galleries around the region, so these particular shops can maintain a healthy demand for my skills year round.

Sometimes people are perplexed by this concept of a journeyman and ask me why I’m making other people’s pottery, or why the shops I work with would want to sell my work as theirs. My answer is that the pots I am making belong to the shop; they are the original designs and forms of the owner(s). No one ever asks me to make my own forms for them to sell under their name. The analogy I liken this to is I am hired to build and prime the canvases for artists to paint on, all the while learning how to be a painter. The journeyman part of what I’m doing here is a learned skill, the real talent is being able to make your own original work that stands out.

I do set aside time to make my own work and participate in two to three shows a year as well as sell through local galleries. I usually spend the weekends working in my home studio. As the increased speed and efficiency factors kick in, it’s possible to complete a day’s worth of work at other shops in a relatively small amount of time, which frees up more time to work at home. Since I spend most of my days making lots of round pots and putting them aside, when I am making my own work, I like to get little more involved with altering and making them not so round, as well as dabble in ceramic sculpture. Wood kilns are abundant here, and potters are more than generous to offer some space in their kiln in exchange for help firing, which I love to do. Preparing to be a Production Potter

Here in town I’m considered a journeyman potter, since I have the availability to work with several shops, but more specifically I’m a production potter, which is a specialized (but not unusual) career. There are several pottery shops nationally and internationally who employ skilled potters to help produce their own unique line of wares. I had jumped into the position based on my  ceramics professor’s suggestion that I look into production work since I liked filling the class shelves with lots of pots, although I had little to no experience in throwing at a production level. Luckily, I had enough patient employers who provided some on-the-job training.

I would encourage any potter looking to get into production throwing to take some time to build skills through some repetition exercises. It’s one thing to know how to center and form a vessel on the wheel, but being able to duplicate the process in a timely fashion with consistently thrown forms is what the shops are looking for. I would advise picking out a small, simple form, perhaps a mug or a bowl. Prepare several pre-weighed clay balls, at least 20 or more to begin with, and duplicate the form to the best of your ability without any intention of keeping the finished forms. Measuring each piece as you go using a ruler for the height and calipers for the diameter while attempting to keep the measurements exact will help built consistency. I found that one major step in transitioning from a novice to a professional potter was knowing exactly what kind of pot you were going to make before the clay even hit the wheel. There’s a deep satisfaction to the craft of being able to duplicate pottery forms, whether it be for someone else or yourself. 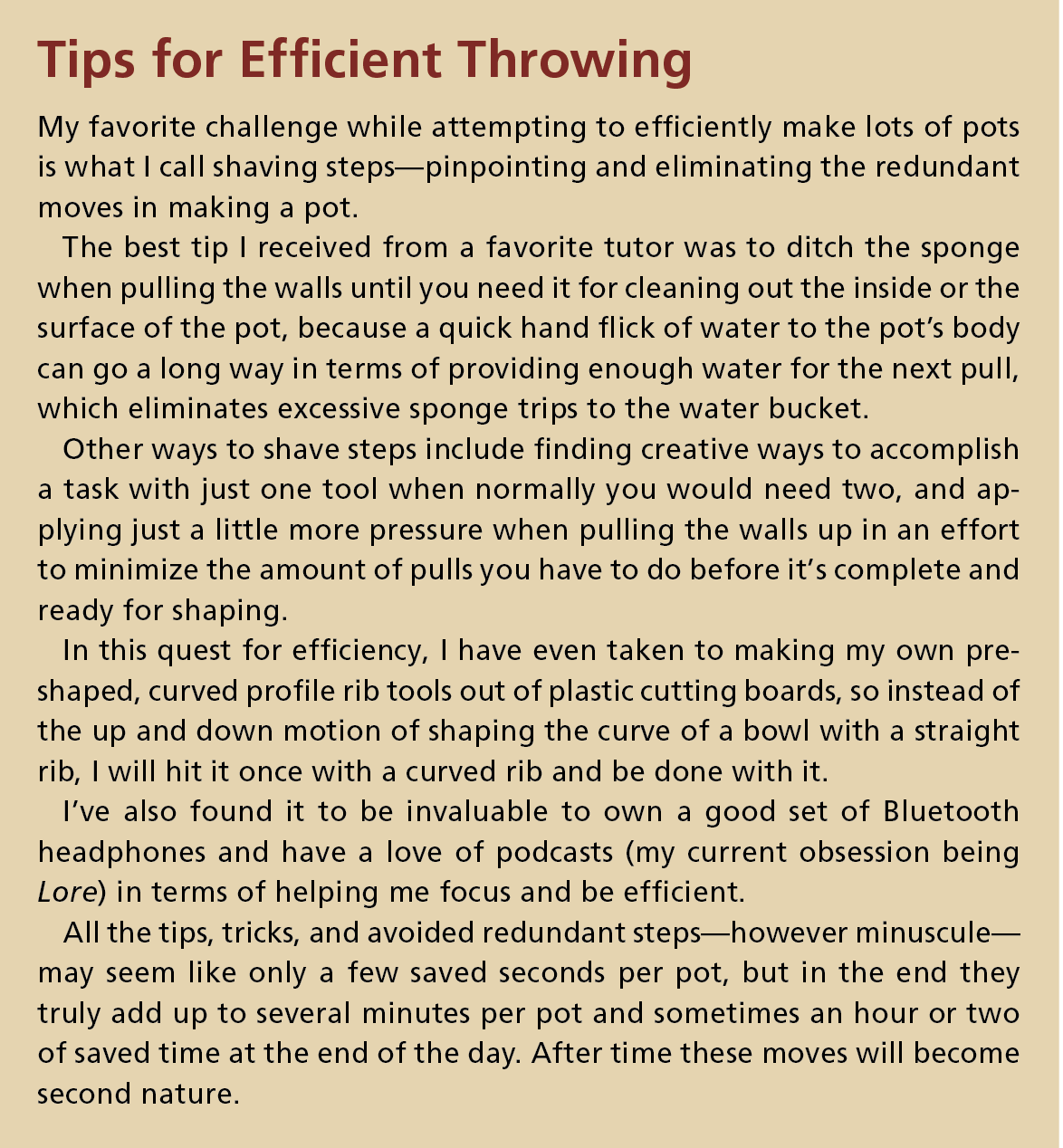 the author Jared Zehmer received his BFA from Virginia Commonwealth University in Richmond, Virginia, and has lived and worked in Seagrove, North Carolina for the last 15 years. To learn more, follow Jared on Instagram @jaredzehmer.