Appears in the February 2019 issue of Ceramics Monthly. 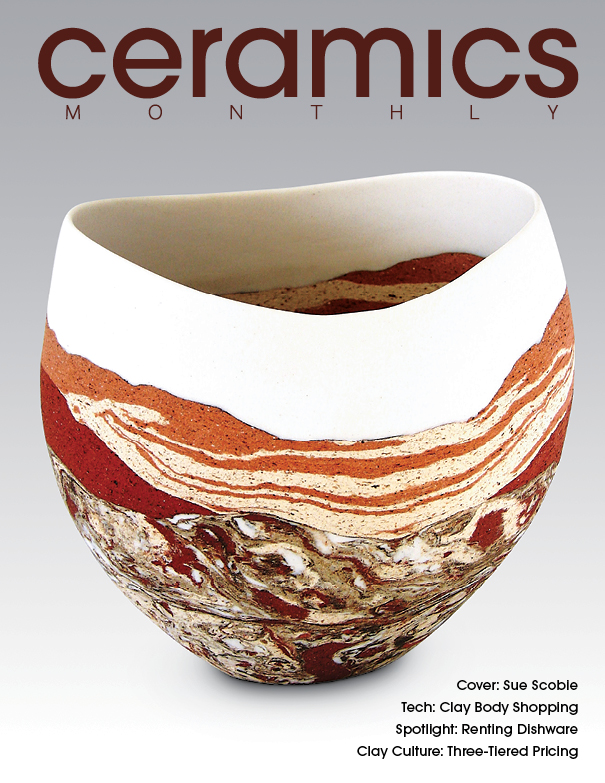 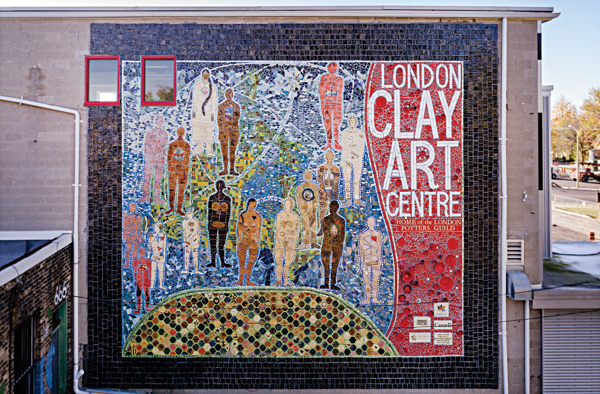 London Clay Art Centre (LCAC) in London, Ontario, Canada now sports an exquisite, large-scale mosaic created to celebrate the country’s 150th birthday in 2017. It is the perfect choice of artistic form, simultaneously embodying and expressing the long-held principle that Canada is a cultural mosaic rather than a melting pot. Similar to how mosaics comprise many smaller pieces of inlaid stone, glass, ceramic, or other materials to create a comprehensive image, Canada prides itself on espousing an immigration policy that allows newcomers to retain their cultural diversity as foundational to the country’s identity and strength.

Differences of opinion aside about the veracity of that claim, the project exemplifies mosaic-ness from concept and design, through execution, and finally in its monumental presence in the heart of an urban neighborhood, called the Old East Village, which has reconstituted itself over the past 20 years, one hard-won piece at a time.

The project achieved three objectives: encouraging participation in Canada’s 150th anniversary, inspiring a deeper understanding of community and country, and building a vibrant and healthy neighborhood with inclusive engagement of its diverse members.

A total of 650 individuals from 25 distinct groups participated in workshops related to the mosaic project throughout the spring and summer of 2017. In addition, 80 member-artists of The London Potters Guild (LPG), the charitable organization that owns and operates LCAC, volunteered 880 hours working alongside community members, teaching and encouraging them to tell their stories by building, carving, stamping, and painting images on the clay. In this way, LPG members acted as ambassadors of the ceramic arts, of the London Clay Art Centre, and of the broader Canadian community. Through their selfless interactions, they have helped forge new personal and organizational relationships, the ultimate impact of which is impossible to measure. 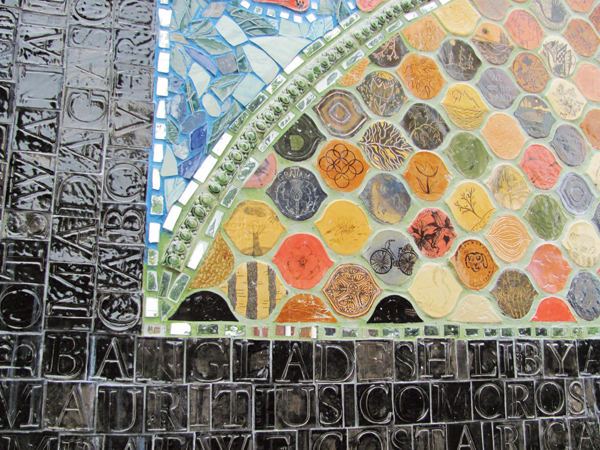 Indigenous youth, Syrian refugees, marginalized youth from the LGBTQ2 community, homeless women, newcomers, and many others played an integral part in creating an indelible monument in their city through imprinting their thoughts, experiences, and emotions on the piece. Susan Day, lead artist coordinator said, “It was transformative to see all of these people come together. They rolled the clay, pounded it with their own hands—their fingerprints are all over this work.” Co-coordinator Beth Turnbull Morrish added, “Every time we met with a group there was joy, excitement, and even tears. It showed us how everybody’s lives are sort of intertwined.”

As creative masterminds and project managers, both Day and Turnbull Morrish were adamant about incorporating strong elements of the beliefs and symbolism of Canada’s First Nations people. The image is built atop a turtle shell, which reflects the creation story of some of Canada’s original inhabitants. Measuring 34½×26 ft. (900 square feet) and comprising an estimated 18,000 pieces, its 17 large and distinctive human figures span the turtle’s back and are standing in front of a stylized map of Canada. A total of 2400 shiny black letter tiles create a bold frame that spells out the names of Canada’s indigenous nations and each country of the world as of July 1, 2017. Tiles are impressed with the names of Canadian bodies of water, places, and native plants. Corn cobs of various colors adorn the piece and represent the importance of this staple food in the development of the nation’s first people, as well as its ongoing place in Canada’s agricultural industry. There are many subtle design elements on its surface that only come into focus upon close inspection—again, a conceptual nod to the profound impact of tiny contributions to the totality.

While the process was unfolding, the ways that participants’ individual efforts would fit into the whole may have been difficult to understand, especially for individuals who have had no prior experience with community art projects. At the mosaic’s unveiling, they had an opportunity to see the impact of their smaller achievements and the ways they were incorporated into the whole. Perhaps more importantly, they have had the opportunity to extrapolate the emotional impact of working creatively and welcoming people into their personal philosophies about where they fit in the larger society. 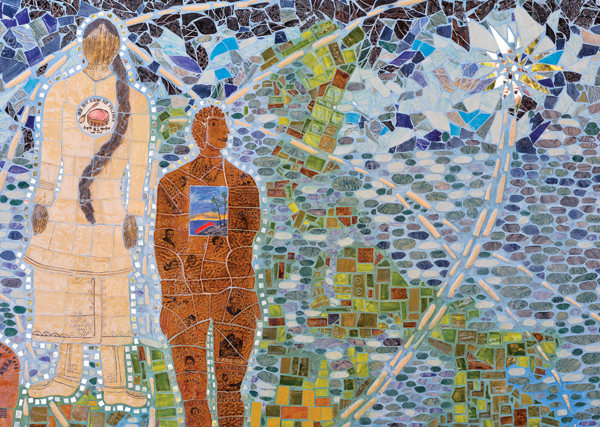 To illustrate the power of this community effort, Kelly Corrin, a teacher at Eagle Heights Public School in London, describes the project’s effect on 14 newly-arrived Syrian girls aged 8–12 who took part in the project. She said, “Many of them had spent the last few years growing up in a refugee camp in the middle of a desert during a harrowing time of war and transition. They had never been exposed to any kind of creativity.” Kelly added, “The opportunity to express and represent themselves and their culture, and how they view themselves as new Canadians was a validating experience that will stay with them their whole lives.” Their contributions have been memorialized in an important public art installation that will be appreciated for generations to come and to which they can bring their children as a testament to their place in their adoptive country.

Jeremy Jeresky, education coordinator for the London Arts Council, sums it up like this: “I have studied public art extensively and I have worked in the realm of community art for close to a decade. Over the years I have seen a lot of both public and community art. I can honestly say that the mosaic at London Clay Art Centre exemplifies the best of what public and community art strive for, and that is a greater and more democratic voice in our public sphere. The mosaic exemplifies that in how it was created, its process, and of course in its stunning form.

In London, Ontario, summer temperatures can reach 93°F (34°C) with high humidity, severe thunderstorms, occasional hail, and even tornados. On average, winters have 142 days of freezing temperatures ranging from 32°F to -13°F (0°C to -24°C) with frequent freeze/thaw cycles and an average snowfall of 6 ft. 5 in. (1.9 m). Considering the extreme environmental conditions, Susan Day and Beth Turnbull Morrish, the lead artist and the co-coordinator for London Clay Art Centre’s (LCAC) mosaic project celebrating Canada’s 150th anniversary, did extensive research and testing to ensure the mosaic’s longevity. 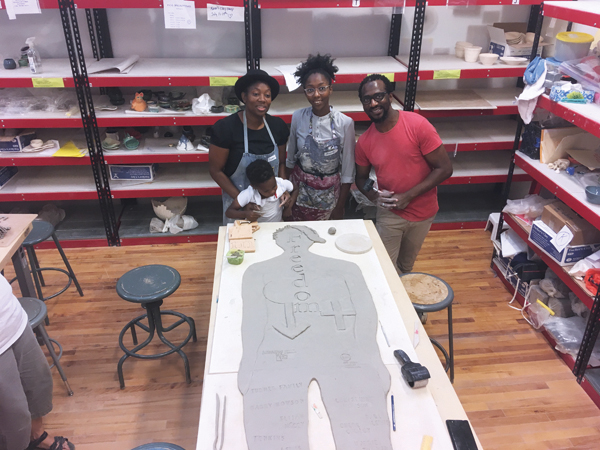 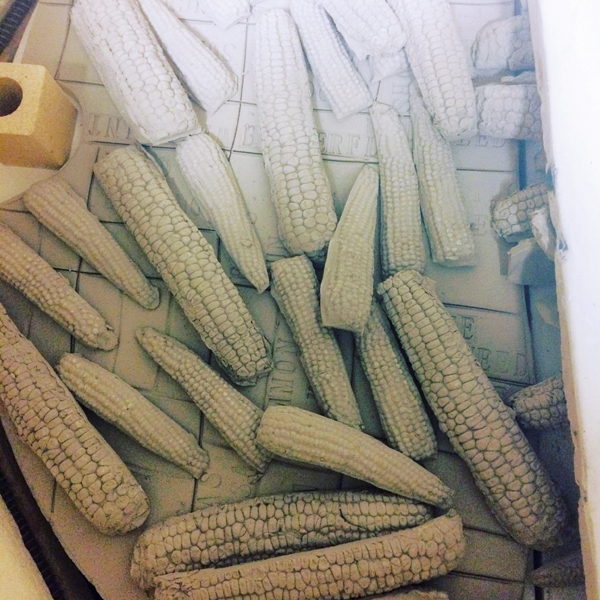 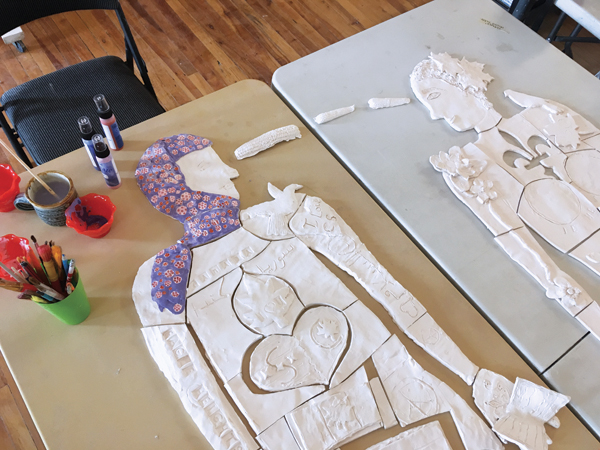 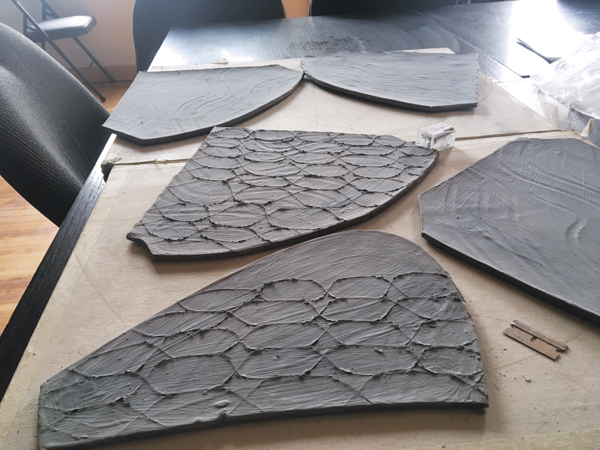 In May 2017, Day and Turnbull Morrish attended a workshop at Philadelphia’s Magic Gardens where they learned about the materials and installation methods of renowned mosaic artist, Isaiah Zagar. After two days, they walked away with the confidence to achieve a large-scale exterior mosaic. The finished product was strongly influenced by Zagar’s method of outlining design elements with small pieces of mirror to reflect light and movement, which draws viewers into the piece.

They modified Zagar’s materials as needed to adapt the process for their specific site and weather conditions. For instance, Zagar uses a pre-mixed latex-based adhesive but, they decided to use Flextile’s 5400 Maxiflex Superior-Grade Polymer-Modified Mortar. They followed his method of using a cement mixture (1 part white portland cement to 3 parts play sand) as grout, adding the appropriate latex paint colorant as required, and using thick rubber gloves and sponges to apply it in a circular motion, thus ensuring that it was pushed into every crevice. No water was used when removing excess grout. After hardening, they scrubbed it off the faces of the mosaic tile with wire brushes and buffed the surface twice—first using only rubber gloves and later using dry cotton cloths. 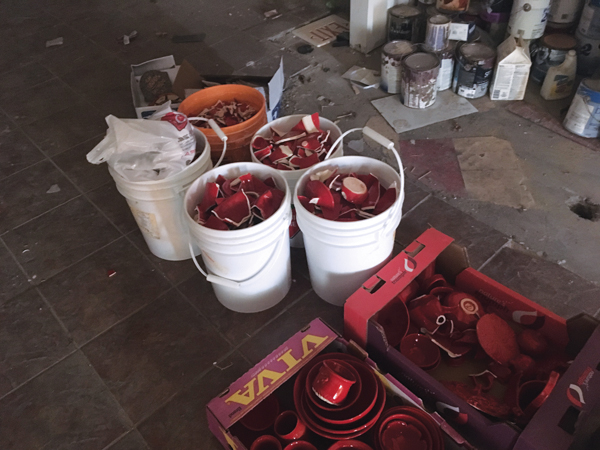 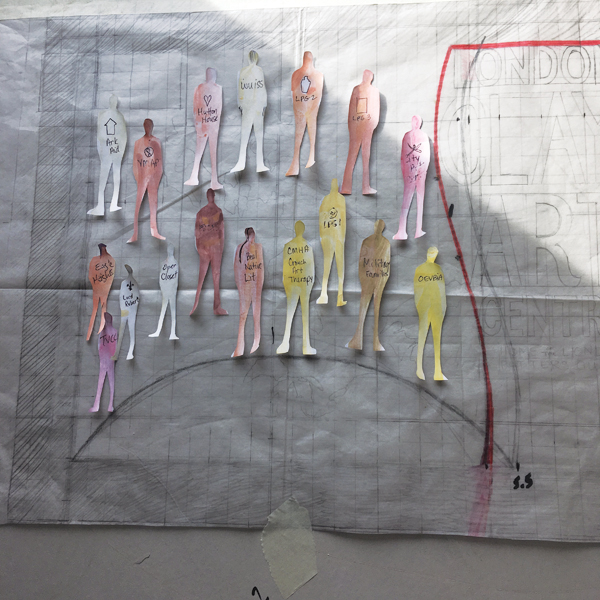 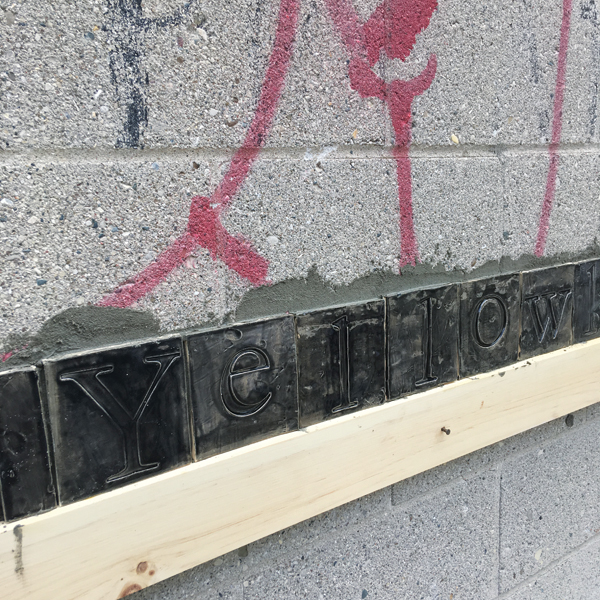 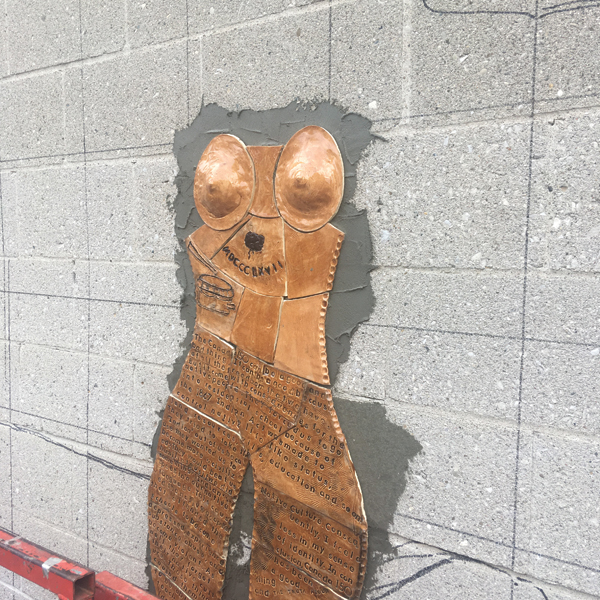 The final piece is estimated to weigh over two tons (4000 pounds or 1800 kg). Initially, this raised concerns about whether LCAC’s old cinder-block wall could withstand the load, but the conclusion was that the impact on a vertical surface would be minimal. The wall was repointed little by little each day using the Maxiflex 5400 to fill any crevices to seal and level the surface in the area where they planned to install the next day’s tiles.

Day and Turnbull Morrish opted to use the Mid Smooth Stone clay body from Tucker’s Pottery Supply. It is a smooth, plastic body with no grog or coarse fire clay, that is versatile for throwing and handbuilding, and fires to an off-cream color at cone 6 oxidation, which allows good color response. Its absorption rate is 1.5% when fired to cone 6. The absorption rate must be below 2% to avoid tile breakage during freezing temperatures.

The base glaze is Yoko Super Clear with various Mason stains and oxides added for color. The color palette was specifically developed for the project using triaxial blends. All glaze variations were run through a series of 60 freeze/thaw and absorption tests, alternating between 24–36 hours in a freezer at 23°F (-5°C) and 24–36 hours immersed in water. This testing method was pulled from an April 14, 2008 Ceramic Arts Daily (now Ceramic Arts Network) blog post by David Kaplan (originally published in Ceramics Monthly, January 2000, pgs. 68–70)  about DeBorah Goletz’s process for weatherproofing tiles.1 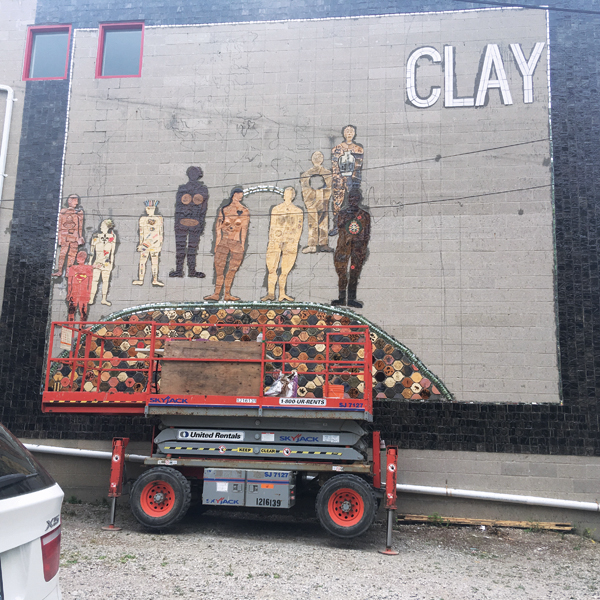 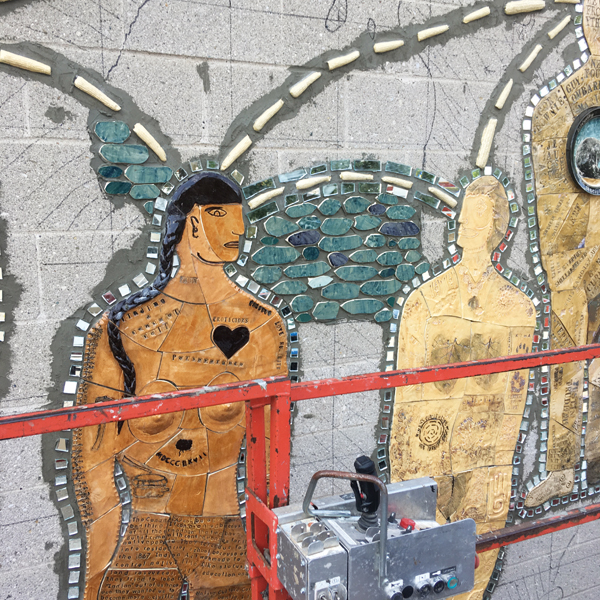 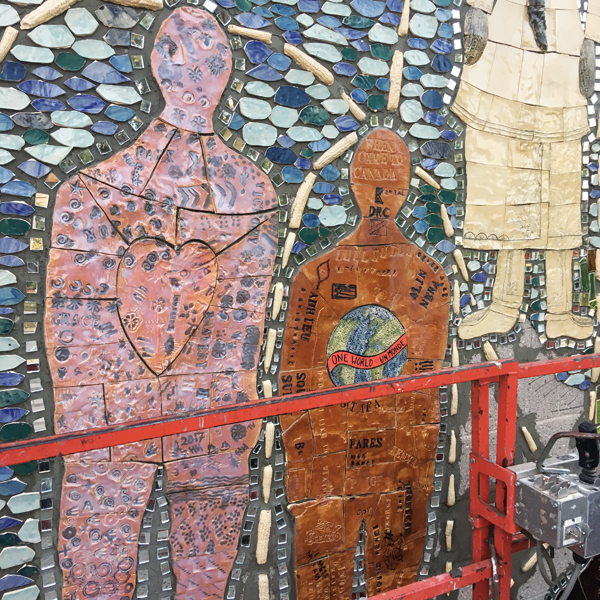 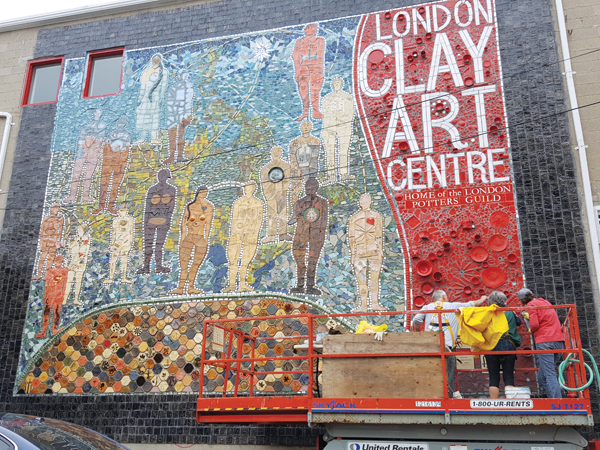 Approximately 80% of the 18,000 mosaic pieces were twice-fired. The other 20% were made by drying kiln-shelf sized slabs to leather hard, glazing the surface before using a scalpel to cut shapes halfway into the slab, and then once firing each sheet to cone 6. When removed from the kiln, they were inverted onto a soft surface and lightly hammered with a rubber mallet to easily separate the pieces.

The winter of 2017–18 was particularly brutal in London and it proved to be a grueling initiation for the mosaic. Nonetheless, it survived its first trial and is ready to withstand many years to come, thanks to the expert guidance of the ceramic community and the masterful attention paid in the pre-production phase.

the author Darlene Pratt is a clay artist who has been the volunteer campaign chair and project manager to build London Clay Art Centre (LCAC) from 2003–14. She recently became the first executive director of LCAC. Pratt has an honors BA with a major in film studies, as well as a graduate certificate in corporate communications and public relations and has worked as the director of marketing communications for various health-related companies.