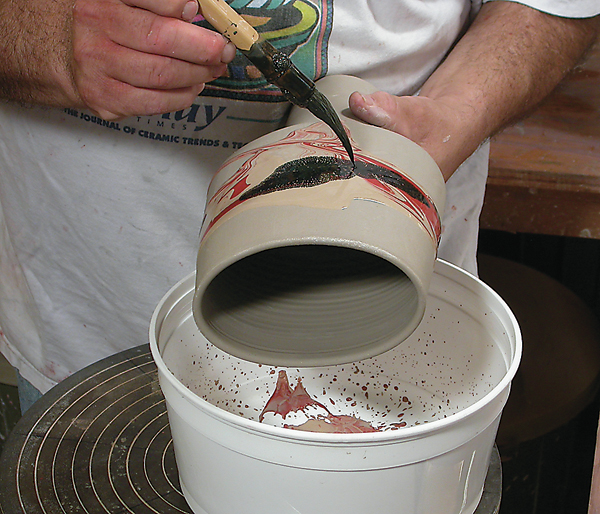 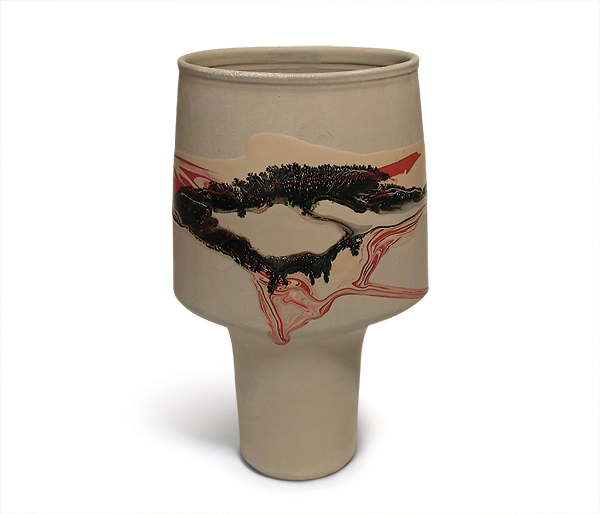 This intriguing method of surface decoration was initially developed and used in the southwest of England, and later in parts of eastern North America, particularly Canada. It was done on simple functional wares with simple shapes. The name has nothing to do with coffee, but is derived from the word Mecca, where the finest moss agate gemstones were found. These gemstones showed veined patterns reminiscent of trees or ferns. The slow evolution is called dendritic formation, where acidic solutions, usually colored with manganese or iron, have permeated between layers of alkaline sedimentary rock. Compression and geothermal heating have hardened the stone into a gem quality. In nature these patterns may take hundreds of years to develop, but in ceramics the process is done in seconds.

It’s a simple process, but it demands exact timing and viscosity control. As with the natural occurrences, it depends on a reaction between acid and alkali. It must be done on leather-hard clay that hasn’t started to change color in drying. If the pot is too dry, it might crack or split; if it’s too wet, it might sag or slump. The viscosity refers to the thickness of the slip coating. If it’s too thick, the acid/color mix won’t move; if it’s too thin, it will run excessively and become blurred. With practice it’s quite easy to control.

Mocha diffusions traditionally were done on both red and white earthenware, but they can be done on almost any clay body and fired at almost any temperature. Clays with a high degree of sand or grog in them sometimes are prone to cracking from the extra wetting of the slip. From my experience, a clay body with a high degree of ball clay or plastic kaolin, such as Edgar Plastic Kaolin (EPK), is the most ideal. This basic slip recipe will fit most clay bodies and can easily be colored with various stains or oxides. 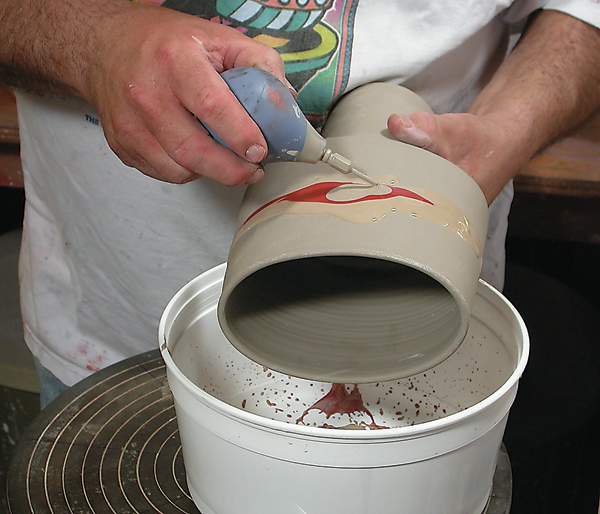 1, 2 Dip, brush, or pour colored slips over the surface of the pot and keep them wet and fluid.

The mixture used to form the patterns is called “mocha tea.” It originally was made by boiling tobacco leaves to form a thick sludge that was then thinned with water to a working consistency and mixed with color. Nicotine solutions are a form of mild acid, and any form of mild acid will work, such as citric acid, lemon juice, coffee, wine or vinegar, particularly natural apple-cider vinegar. The mix is made as a solution of acid mixed with colorant. Most colorants work quite well, although carbonates or stains are usually better than oxides, since they’re  typically physically lighter precipitate than oxides. Heavy materials, such as black copper oxide, black cobalt oxide, and black iron oxide, don’t work well because the acid can’t adequately hold the color in suspension. A ratio of about one heaped teaspoon of color to ¼ cup vinegar is a good starting point. However, individual testing should be done to get the two liquids to work together to create significant dendritic patterns. 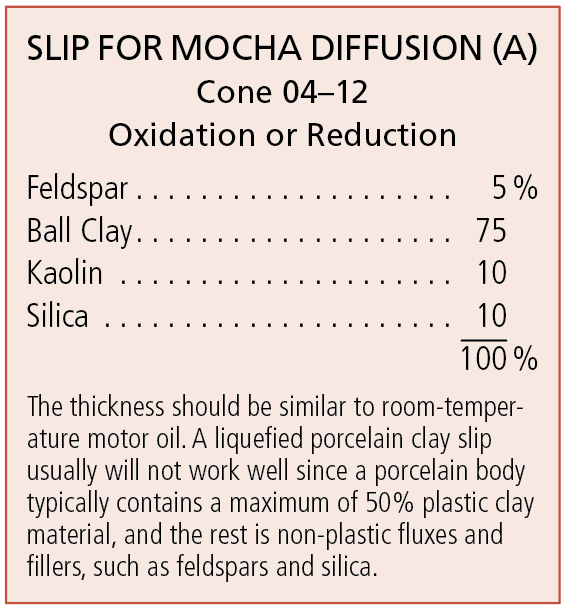 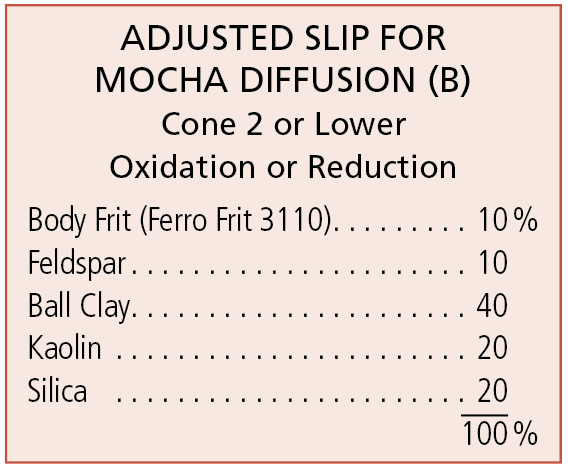 First, dip, pour, or brush the leather-hard object with slip. While the surface is still wet, and before it has begun to lose its shine, the acid/color mix is dripped or trailed into it (1). This is best done using a well-loaded brush held just touching the slip (2). If the viscosity of the slip and the acid/color mix is right, the feathering pattern will take place naturally, as the acid eats a fern-like pathway through the slip, pulling the colorant with it. Traditionally, the surface is covered with a thin coat of clear or transparent glaze, but this might cause the color to bleed out or become absorbed into the glaze, particularly at temperatures above cone 4. I prefer to use the technique on high-fired wares that don’t need to be glazed. It’s a technique that takes a while to get used to, but it can give interesting results when used sensitively. It also can be done quite easily on once-fired glazes, providing they have enough ball clay in them.

Where slips are stained with colorants, the color will usually bleed through the glaze, unless the glaze is totally opaque. The basic creamy, white slip recipe (A) will fit most clays and can be colored easily with any colorant or stain. I have used that slip recipe for many years and have found it to be very versatile and particularly good for traditional slip-ware techniques. However, on some clays, particularly those firing at cone 2 or lower, that slip can cause the covering glaze to craze. In this case more silica will be needed. The adjusted recipe (B) should solve the crazing problem, but it will also bring about a lessening in plasticity and affect the fluid qualities necessary for some traditional techniques. These fluid qualities were previously assisted by the volume of ball clay. Some of this fluidity can be regained by adding a small amount of bentonite, Macaloid (now called Bentone MA), gum, or deflocculant.

This article was published in the May/June 2016 issue of Pottery Making Illustrated.