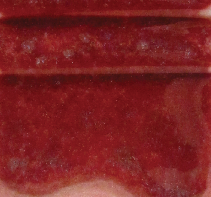 Sourcing Copper Copper was one of the first metals worked by humans (6000–4000 BCE). It shows up in glass as early as 2000 BCE and in glazes of the Han Dynasty (200–25 BCE). Some of the most famous copper green glazes are known as Oribe, which comes from Furuta Oribe, a general and tea master during the Japanese Keicho period (1596–1615 CE). Another popular copper glaze is a copper red. It most likely came about from the accidental reduction of copper green glazes fired in a wood-burning kiln. Some of the early sources of copper in glazes are believed to be from spraying water onto hot bronze. This produces a black flaky substance composed of copper oxide and tin oxide (the metals in bronze), which was then finely ground and used to produce copper reds. Copper red colors include strawberry, oxblood, flambé, black-red, peach bloom, apple red, rose carmin, etc. There are four major sources of copper in glazes: Black copper oxide (CuO); red copper oxide (Cu2O); copper carbonate (CuCO3); and copper sulfate (CuSO4), which dissolves in water. Each has different properties that can make a significant difference in the outcome of the glaze. Copper carbonate is the most commonly used form. It disperses well in a glaze slop and melts well in glazes to give uniform color. Black copper oxide has a larger particle size that doesn’t melt well and can cause specking in glazes. Red copper oxide is the strongest form and has a hydrophobic coating (oleic acid surfactant) that keeps it from reoxidizing in the air. Because of this coating, it won’t mix with water and simply floats on the surface. This can be corrected by adding several drops of liquid soap, which breaks the surface tension and allows it to disperse.

Copper Glaze Tips Oribe pieces are decorated on one side with an iron oxide design over a transparent glaze while the other side is decorated with a transparent copper green glaze. Then they are fired in oxidation. Oribes can get a scummed layer on top that dulls the color. The traditional method for getting a clearer copper Oribe is to soak chestnut husks in water and then soak the pots in this acidic solution. But today potters just use a weak muriatic acid (hydrochloric acid) solution. (This is toxic so use in a well-ventilated area with safety glasses and a mask.) Copper volatilizes above 1877°F (1025°C) and becomes increasingly volatile, making it a fume hazard. The volatilization can affect adjacent pots, particularly those with tin whites or celadons, resulting in a pink blush. This property can also be used to decorate a pot. Glazing the inside of a saggar with an Oribe glaze and then placing a tin white glazed tea bowl in the saggar will give a delicately blushed pink tea bowl. Copper glazes are often used in soda and salt firings because the introduction of volatile sodium during the firing turns copper glazes various shades of blue/turquoise/green. Sometimes potters use high amounts of copper (10%) in a green salt glaze, which turns black, but when the salt fumes hit that part of the pot, the area turns deep green on one side with the other side of the pot fading to black. Raku: With sufficient post-firing reduction, the copper oxide/carbonate can be reduced to metallic copper finishes. These copper lusters are only microns thick so they can reoxidize to produce green colors (much like a penny oxidizes) if the pots aren’t coated with a polyurethane sealant. Copper is also used in Islamic luster firing techniques as well as Egyptian Paste (ancient Faience), which is a self-glazing, low-fire clay body that goes back 7000 years. It was probably discovered by firing sand, clay, and salt or soda ash. Then colorants were added to make colorful beads and ornaments.

Toxicity While there is no legal limit set for safe leaching of copper in glazes, potters should be aware that the legal level of allowable copper deemed safe for drinking water is 1.3 mg/L (based more on its effects on taste than toxicity). Levels of above 5% can create black metallic surfaces and should not be used in functional ware.* Excessive amounts in a glaze can be leached with prolonged or repeated contact with acidic foods or beverages. The extremely basic conditions in dishwashers can attack a glaze surface, causing erosion of the surface and resulting in increased leaching over time. *Digitalfire Reference Database, http://digitalfire.com.