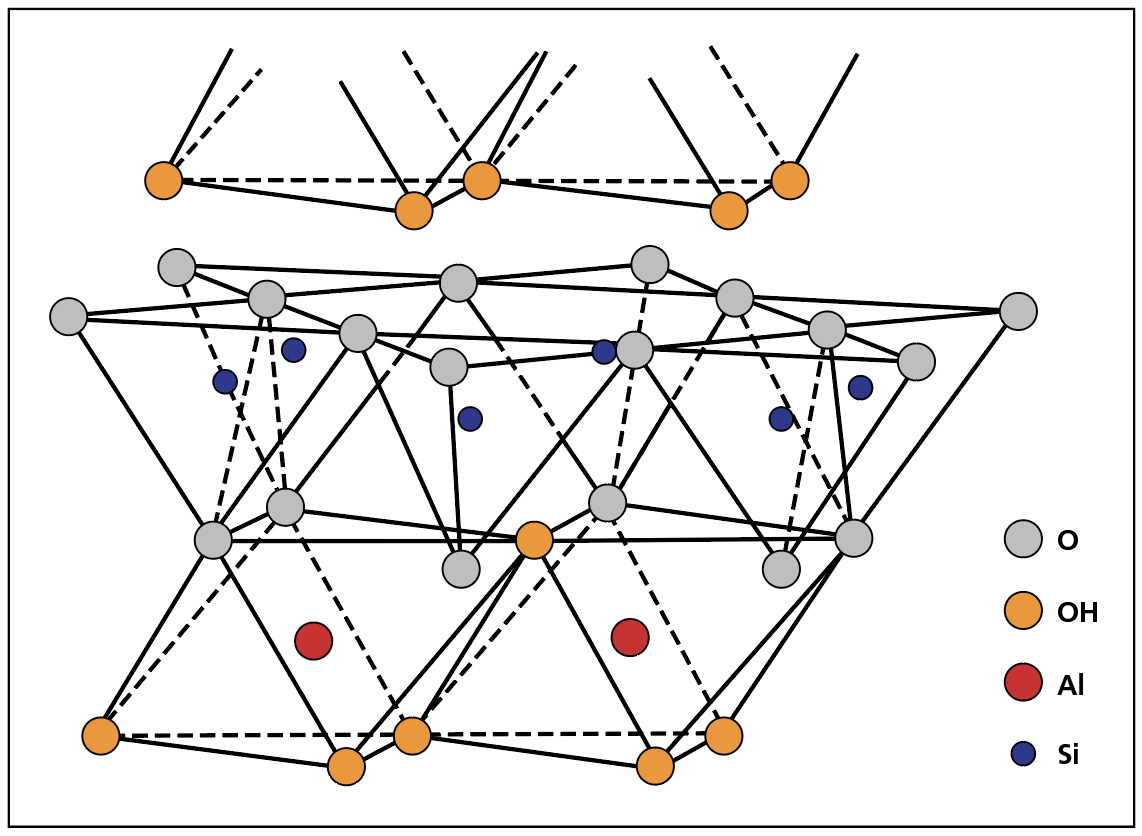 Need a brief overview of the handful of clay minerals most important to the ceramic arts? Of course you do. Here is all you need to know about kaolinite, halloysite, montmorillonite, and illite.

Cations: Positive ions of elements. In clays, these are most often atoms of alkali and alkaline earth elements but sometimes of metals such as iron.

Halloysite: A kaolin group mineral with the chemical formula Al2O3• (SiO2)2• (H2O)2 (chemically the same as kaolinite.) The crystals are usually small cylinders of multiple layers with silica tetrahedrons on the outside and alumina octahedrons on the inside of the layers.

Kaolinite: A kaolin group mineral with the chemical formula Al2O3•(SiO2)2•(H2O)2. The flat, hexagon-shaped crystals consist of alternate sheets of silica tetrahedrons linked by oxygen atoms to sheets of alumina octahedrons.

Montmorillonite: A smectite group mineral. Its chemical formula is (Na, Ca)0.33(Al,Mg)2(Si4O10)(OH)2• nH2O. The extremely small plate-shaped crystals are loosely bound to each other and are about 1 micron across.

Octahedral Sheet: A crystal layer composed of repeating 8-sided elements called octahedrons. In clays an aluminum atom or other cation is at the center of each octahedron.

Tetrahedral Sheet: A crystal layer composed of repeating 4-sided elements called tetrahedrons. In sheet silicates typically a silicon atom is at the center of each tetrahedron.

What is the difference between clay minerals and clays? It’s simple, almost all clays are a mixture of several different kinds of minerals. Ball clay, for example is almost always a mixture of kaolinite, quartz, mica, and a tiny bit of pyrite. All four ingredients are minerals. Common clays include ball clay, fireclay, stoneware clay, earthenware clay, and slip clay; names that refer to some physical characteristics of clay from particular deposits. The clay minerals there, the other minerals that are mixed with them, and how those all came to be located where we find them, play a role in determining the properties of each clay deposit.

Clay minerals, on the other hand, are the same no matter where we find them. By definition, minerals have specific chemical compositions and specific physical properties. Clay minerals are sheet silicates. That is, their crystals are composed of sheets of silica tetrahedra and alumina octahedra. A silicon atom sits at the center of each tetrahedron and oxygen atoms form the four corners. The oxygens are shared by adjacent tetrahedra and with adjacent sheets of alumina octahedrons. An aluminum atom sits at the center of each octahedron. Clay minerals are classified by the ratio of their silica and alumina sheets. Kaolinite and halloysite are 1:1 sheet silicates, one layer of silica for every layer of alumina. Illite and montmorillonite are 2:1 sheet silicates, with 2 sheets of silica tetrahedra, one on each side of a sheet of alumina octahedra. 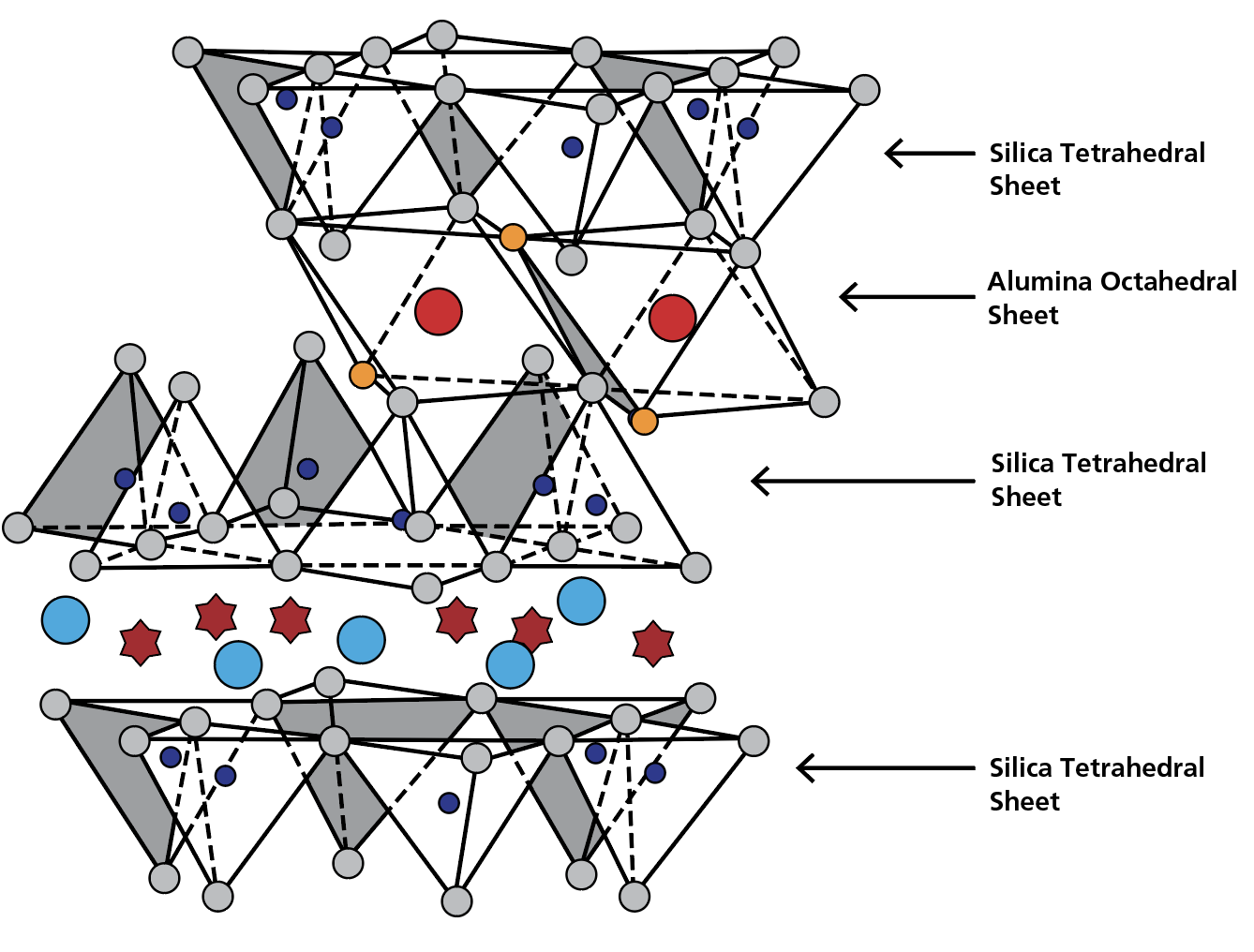 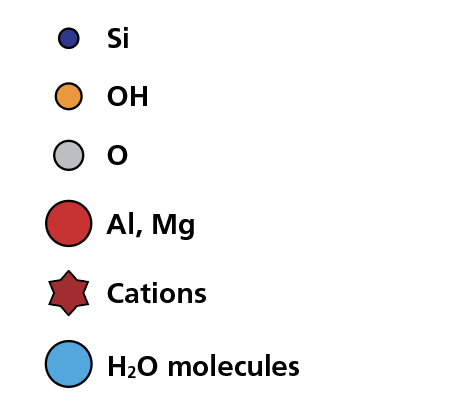 2:1 Sheet Silicates: illite and montmorillonite. As with all clays, powerful chemical bonds form the alumina octahedral and silica tetrahedral sheets. Cations are held between the sheets by relatively weak electrostatic attraction.

Kaolinite, in the kaolin group, is by far the most important ceramic clay mineral. Kaolin clays may also contain some feldspar, quartz, and mica but are predominantly kaolinite. Kaolins form by the weathering of granite or feldspar.

Halloysite is also a kaolin group mineral. Kaolinite and halloysite have the same chemical formula but different crystal structures. Less abundant than kaolinite, halloysite has the important property of firing to exceptional whiteness when mined from very pure deposits.

Montmorillonite is the major mineral component of bentonite clays. It is used in ceramics at least as widely as kaolinite but typically in tiny percentages. Because its crystals are extremely small and loosely bound to each other, a small amount of it can dramatically influence the plastic behavior of a clay body or the suspension property of a glaze slurry. Sodium-rich montmorillonite swells dramatically in water, making it an extremely effective glaze suspender. Magnesium substitutes for some aluminum atoms in the octahedral layer of montmorillonite crystals.

Illite is the only clay mineral in the illite group of clay-micas. Its chemistry is complex and variable. Chemical elements in illite, including potassium, magnesium, and iron, all lower the melting temperature of a clay body containing illite. Because of the iron content of illite, clay bodies made using it will not fire white.

Albany slip clay and Ocmulgee red clay were illite-rich clays. Cedar Heights Redart clay is about 40% illite plus silica, kaolinite, and other clays.

Virtually all clay minerals can be formed in more than one way. However, the most massive clay deposits reveal specific conditions likely to form particular clay minerals. For example, kaolinite and halloysite are both weathered from potassium feldspar. Abundant rain in tropical climates can weather potash feldspar to kaolinite. Halloysite’s unique tubular crystals form when the same sort of feldspar is weathered by geothermal hot water rich in carbon dioxide.

Illite is weathered from muscovite mica and feldspar. However, the weathering has to occur from relatively alkaline (high pH) water for illite to form. It is infrequently found in sedimentary rocks such as shale and mudstone and in some metamorphic rocks.

The swelling clay minerals like montmorillonite found in bentonite clays typically weather from volcanic ash in dry environments. Such ash can also weather to illite or kaolinite in favorable conditions.

Ball clays and kaolin are both primarily kaolinite in most cases. A small amount to significant fractions of quartz are also found. If the chemical composition of pure kaolinite powder (39.5% alumina, 46.5% silica, 14% water) is compared to the composition of a typical kaolin or ball clay, the presence of silica is apparent.

For example, a frequently used ball clay contains about 52% silica and only 32% alumina. The alumina is all in the clay. Other elements are also present including titania, iron oxide, and organics. That’s not unusual. The ratio of clay, silica, alumina and other elements changes from one ball clay to another, which explains why making substitutions in a clay body or glaze recipe can affect its melting temperature and its thermal expansion.

While it’s relatively easy to conduct such an examination of a clay with simple mineralogy, it becomes far more difficult with a clay like Albany slip, which has significant percentages of a number of different minerals. That helps explain why the many substitutes for Albany slip clay are not exactly like the original raw material.

the author Dave Finkelnburg is a studio potter, writer, and a practicing professional engineer with a Master’s degree in Ceramic Engineering from Alfred University. He is a frequent contributor to Ceramics Monthly.

This article originally appeared in the December 2017 issue of Ceramics Monthly.