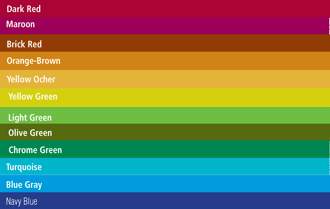 The following has been excerpted from The Ceramic Spectrum: A Simplified Approach to Glaze and Color Development, published by The American Ceramic Society.

Note: Colors bars are for visual reference only, and do not represent exact colors, since that will depend largely on other elements of glaze chemistry mentioned below.

Red to Orange The potter’s palette can be just as broad as the painter’s. Different techniques can be closely equated to working in any of the two-dimensional media, such as pencil, pen and ink, pastel, watercolor, oils, encaustics or acrylics. We also have an advantage in that the fired clay object is permanent, unless disposed of with a blunt instrument! Our works may live for thousands of years—a sobering thought. Because a number of colors can only be achieved at low temperatures, you need a series of layering techniques in order to have the fired strength of stoneware or porcelain and the full palette range of the painter. To accomplish this, low-temperature glazes or overglazes are made to adhere to a higher-fired glazed surface, and can be superimposed over already existing decoration. To gain the full measure of color, one has to fire progressively down the temperature range so as not to burn out heat-sensitive colors that can’t be achieved any other way. Usually the lowest and last firing is for precious metals: platinum, palladium, and gold. For the hot side of the spectrum—red, orange, and yellow—there are many commercial body and glaze stains, in addition to the usual mineral colorants. Ceramists looking for difficult-to-achieve colors might want to consider prepared stains, particularly in the yellow, violet, and purple ranges. These colors are often quite a problem with standard minerals, be they in the form of oxides, carbonates, nitrates, sulfates, chlorides or even the basic metal itself. Minerals that give reds, oranges, and yellows are copper, iron, nickel, chromium, uranium, cadmium-selenium, rutile, antimony, vanadium, and praseodymium. Variations in glaze makeup, temperature and atmosphere profoundly affect this particular color range. The only materials which produce red at high temperatures are copper, iron, and nickel . The results with nickel are usually muted. Reds in the scarlet to vermilion range can only be achieved at low temperatures. The chart should help pinpoint mineral choices for desired colors (note that the color bars are for guidance only and not representative of the actual colors —Ed.). Colors are listed with the minerals needed to obtain them, approximate temperatures, atmosphere, saturation percentage needed, and comments on enhancing/inhibiting factors. Because of the widely variable nature of ceramic color, there are many generalities here. Where the word “vary” occurs in the column under Cone, it signifies that the intended results could be expected most of the time at various points up to cone 10.

Yellow-Green to Navy Blue The cool side of the glaze spectrum (from yellow-green to navy blue) is considerably easier, both to produce and work with, than the warm. In the main, colorants that control this range create far fewer problems than almost any of the red, orange, and yellow range. Some are temperature and atmosphere sensitive, but that’s nothing compared to the idiosyncrasies possible with warm colors. The colorants known for creating cool hues are copper, chromium, nickel, cobalt, iron, and sometimes molybdenum. For variations, some are modified by titanium, rutile, manganese or black stains. The usual three variables of glaze makeup, temperature, and atmosphere still control the outcome, though it is less obvious in this range.

The indigo-to-purple part of the color wheel is small but significant. The colorants that produce this range are nickel, cobalt, manganese, umber, iron, chromium, rutile ilmenite, copper, iron chromate, and black stains. In short, one could say that the colorants needed include just about the whole group that are used for all the other colors in the spectrum. The only ones I haven’t talked about previously in this articles series are umber, ilmenite, iron chromate, and black stains. Black Stains Formulated from a variable mixture of other colorants, black stains are usually rather expensive due to their being saturations of colorant materials. Various companies produce black stains usually from a combination of iron, cobalt, chromium, manganese, iron chromate and sometimes nickel mixed with fillers and fluxes such as clay, feldspar and silica. I use the following recipe:

This mixture is best ball-milled for a minimum of four hours to limit its tendency toward cobalt specking, and to make sure that the colorants are thoroughly mixed. Because any black stain is a very concentrated mixture, only small amounts are normally needed to cause a strong effect. In a clear glaze, a maximum of 5% should produce an intense black. In opaque glazes, more stain than that may be needed. Black stains and white opacifiers mixed together will produce a range of opaque grays. Stains, like other ceramic materials, are subject to the three variables of glaze makeup, temperature and atmosphere. Outside the color wheel one finds tones of brown, gray, and black. These moderate other colors. A color wheel could, I suppose, include the range of opacifiers since they also have a strong role in affecting color. The toning influence of brown, gray, and black is just as much opacifying in result as are the white opacifiers such as tin, titanium, and zirconium compounds such as Zircopax, Opax, Superpax, and Ultrox. Slight additional increments of any of these colors will render most glazes, colored or not, progressively darker as they are added.