All About Iron John Britt 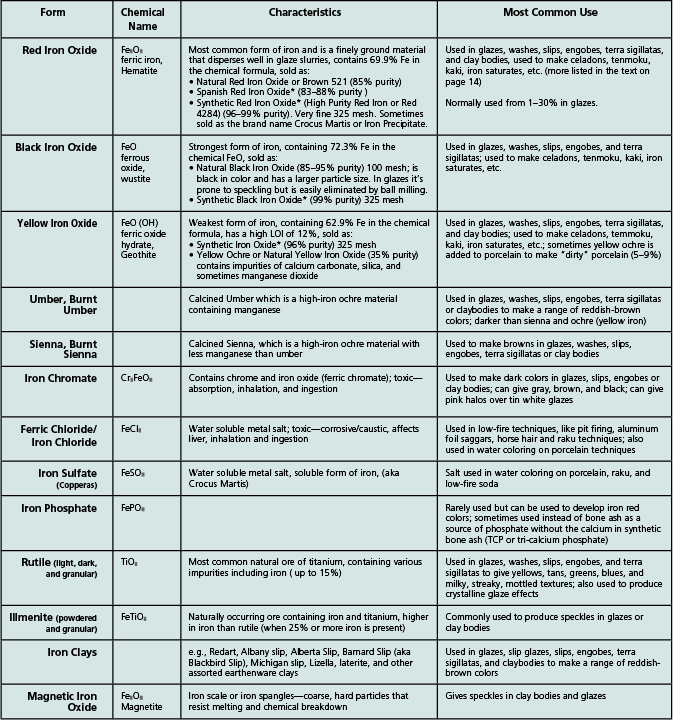 Iron is everywhere in many different forms, but that doesn’t mean it has to be boring—or even brown.

Forms of Iron Iron oxide is the most common colorant in ceramics. It is so ubiquitous that it is very difficult to find a material without some iron—it’s found in almost everything from feldspars to kaolin to ball clays, earthenware clays, and many colorants. In fact, many materials require expensive processing to reduce the amount of iron to acceptable levels. Iron is a very active metal that combines easily with oxygen. That means it is very sensitive to oxidation and reduction atmospheres, producing a wide range of glaze colors and effects from off white, light blue, blue, blue-green, green, olive, amber, yellow, brown, russet, tea-dust, black, iron saturate, iron spangles, iron crystalline (goldstone/tiger’s eye), oil spot, hare’s fur, kaki (orange), leopard spotted kaki, tan, black seto, pigskin tenmoku, shino, gray (Hidashi), iridescent, silver, gold, etc. Iron also plays a major role in clay bodies, slips, terra sigillata, and flashing slips. There are three major forms of iron used in ceramics: red iron oxide (Fe203), black iron oxide (FeO or Fe3O4), and yellow iron oxide (FeO (OH)). There are different mesh sizes and grades, and each contains varying degrees of impurities that can make a significant difference in the results you get. The most interesting thing about iron is that it can act both as a refractory and a flux. As red iron oxide, Fe2O3, it is an amphoteric (refractory/stabilizer) similar in structure to alumina (Al2O3). But if it is reduced to black iron oxide (FeO) it acts as a flux similar in structure to calcium oxide (CaO). What this means is that a tenmoku glaze with 10% red iron oxide will be a stiff black glaze if fired in oxidation because the iron oxide acts as a refractory. But, if the same glaze is fired in reduction that 10% Fe2O3 will be reduced to FeO, changing it to a flux, which will make it a glossy brown/black glaze that may run. Another interesting property of iron oxide is that if it is fired in oxidation it will remain Fe2O3 until it reaches approximately 2250°F (approximately cone 8) where it will then reduce thermally to Fe3O4 on its way to becoming FeO. The complex iron oxide molecule simply cannot maintain its state at those temperatures. This results in the release of an oxygen atom that will bubble to the surface of the hot glaze and pull a bit of iron with it. When it reaches the surface the oxygen releases the iron as it leaves the glaze, creating spots with greater concentrations of iron oxide. This is what creates an oil spot glaze. This reaction can easily be seen through the spy hole of a kiln or with draw tiles. There is an obvious and unmistakable bubbling. If heated further, these spots begin to melt and run down the pot, creating a distinctive “hare’s fur” effect.

Iron Glazes It would be impossible to show all iron glazes in this article but highlighting a few will give you a glimpse of the wide variety.

*Synthetic and Spanish Varieties Synthetic Red Iron is produced by calcining black iron oxide particles in an oxidation atmosphere. They are then jet milled, which produces “micronized” red iron oxide particles that are approximately 325 mesh. This type of red iron is very heat stable (up to 1832°F (1000°C). This differs from black iron oxide, which changes color at 365°F (180°C) from black to brown to red as it oxidizes. The color of red iron oxide changes from light pinkish to red to dark purplish red as the particle size increases. Spanish red iron oxide is bacterially ingested iron oxide that is micronized. The Tierga mines in Spain found that their iron sulfide was inadequate for steel making (which accounts for 95% of the iron market). After some time a worker noticed that the iron in a pool of rain water turned a brighter shade of red after it was heated. This turned out to be caused by a bacterium, that uses iron sulfide as an energy source. The bacterium changes the state of the iron, which is then put into evaporative ponds where it forms green crystals. These are then roasted to produce Spanish red iron oxide.

This article was excerpted from the March 2011 issue of Ceramics Monthly, which can be viewed here.