Appears in the January 2015 issue of Ceramics Monthly. 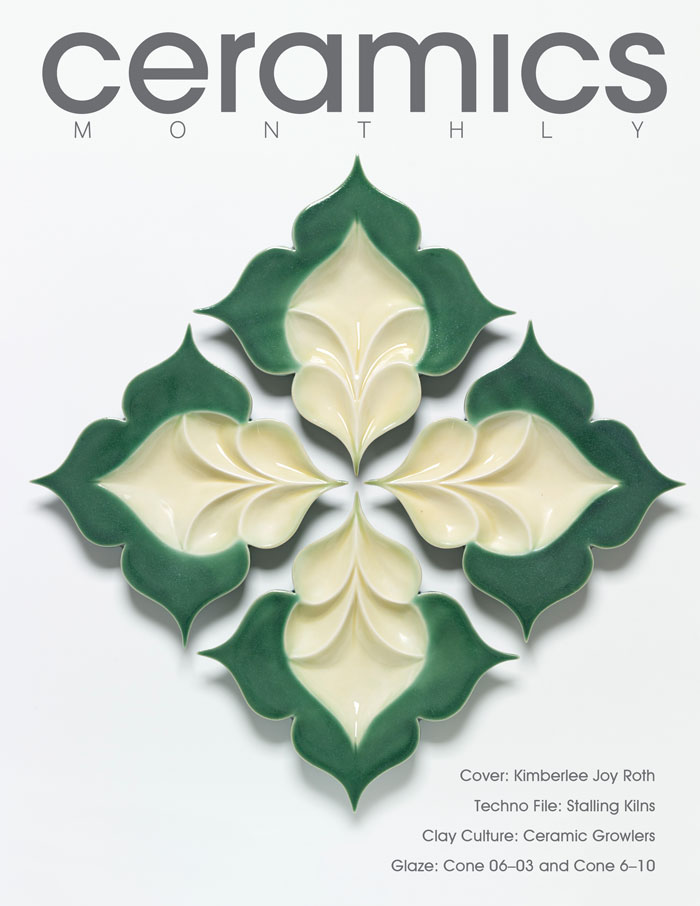 The current dynamic between contemporary American studio ceramics and the field of design has received relatively little critical attention, in contrast to the more prominent (and contentious) relationships of ceramics to the categories of art and craft. Unlike these, design has been widely regarded as an obvious concern of industry rather than the studio. Consequently, when American studio ceramics is discussed, traits such as utility are frequently subject to binary logic: e.g., ceramic objects that embrace physical function perpetuate the craft tradition and those that eschew it relate to contemporary art. Consideration of design, however, complicates the picture considerably, not simply by introducing a third category but, more importantly, by increasing those instances in which absolute categorization is clearly inappropriate and classification itself comes to seem terribly artificial.

While there is nothing deliberately rebellious about Heather Mae Erickson’s practice as a ceramist, she is well aware that her focus on utilitarian forms on the one hand and her reliance largely upon molding techniques on the other separates her work from much of contemporary American studio ceramics. Not likely to be described as a sculptor, given the nature of her pieces as tablewares, she is equally unlikely to be classified as a potter or craftsperson. After all, many of those who are adamant about such definitions have voiced the opinion that craft objects must unequivocally be produced by hand. Molding techniques, despite their labor-intensiveness and demand for attention to physical detail are often viewed as detached and mechanical, and consequently many American ceramists dismiss mold-made work categorically from consideration as craft.

Erickson is familiar with these convictions regarding craft, and she is equally versed in the discourse surrounding ceramic art. She learned to throw on the wheel as a crafts-ceramics undergraduate student before earning her graduate degree at the Cranbrook Academy of Art, one of the finest environments in the country for exploring the conceptual potential of ceramics as contemporary sculpture. At Cranbrook under the mentorship of Tony Hepburn, she gradually ceased to think of herself as a potter, though she lost none of her interest in the utilitarian application of her work. She sought a clean and precise aesthetic in her functional pieces, which at the time embraced a range of pastel colors and fluid forms with walls as thin as she could fashion them on the wheel. After a memorable critique with visiting artist Marek Cecula, however, she began to contemplate the use of molding techniques in order to achieve the formal qualities that she desired.

Following conferral of her M.F.A. in 2004, Erickson spent three months at the Archie Bray Foundation in Helena, Montana, where she began experimenting with molding under the informal tutelage of fellow resident Susan Beiner. The results of her initial foray into mold making were encouraging, though far from polished. A visit to Richard Notkin’s nearby studio, with its orderly archive of precisely fashioned molds, provided a paragon to strive for and reinforced her desire to master the techniques necessary for producing highly refined slip-cast work. Having received a Fulbright Research Award to study at the University of Art and Design in Helsinki, Finland, later that year, Erickson decided to use the opportunity to develop her mold-making skills.

When she arrived in Finland she was gratified to find that the majority of ceramics students at the university were routinely producing plaster models and molds with the full encouragement of the faculty. One night each week Matti Sorsa, a mold maker from the adjoining Arabia porcelain factory, visited the studios to render advice. Erickson took advantage of all that this expert had to offer. Some of the most successful products of this technical assistance were complex u-shaped porcelain cups cast in a one-piece dropout mold. In homage to the Helsinki winter, Erickson glazed the upper portions of these white “Finnspired” vessels with an icy pale blue concocted from a stain retired from the Arabia factory’s inventory.

Ironically, despite the proximity of the factory, Erickson never visited its facilities during her residency at the university and gave little consideration to the applicability of her designs to an industrial context. Although her works are clearly amenable to manufacture as uniform multiples and she is intrigued by the thought of their being reproduced in unlimited numbers, she has not yet stepped back from the production process to assume the exclusive role of designer. Conceiving of her work as essentially a studio practice, she has preferred to maintain control over every detail from initial inspiration to final firing. She does not in the least fit the stereotype of the designer who dislikes sullying his or her hands through physical labor. At the same time, her practices reflect many intriguing parallels with industrial design.

In Europe, where studio ceramics and design have long been more closely allied, Erickson’s work would be unlikely to raise many eyebrows. In recent years a number of European studio ceramists have turned their attention to industry and even begun providing designs for porcelain factories such as Sèvres. Their activity has largely involved the formation of a dialog between studio ceramics and industry rather than the abandonment of one for the other. The consequences have been twofold: on the one hand, the influence of studio ceramics has prompted some industrial designers to soften product uniformity and explore a greater range of forms, and, on the other, some studio ceramists have given new consideration to the potential of industrial techniques for creative expression.

Erickson can easily relate to the latter group. While she professes strong affinities for the handmade object, she believes that a great deal can be learned from industry in terms of both process and conceptualization. If the prospect lay within her power, she would seek to change the educational system for ceramics in the United States in order to place a much stronger emphasis on the role of design. At the same time, she acknowledges that inherent obstacles exist to any such transformation, not the least of which is the relative lack of an American ceramic dinnerware industry. It is no wonder that, with few immediate prospects of collaborating with or intervening in industry, American students of studio ceramics tend overwhelmingly to develop allegiances either to the craft tradition or to contemporary art.

For Erickson, art, craft and design are not mutually exclusive categories, and therefore one should feel entirely free to draw routinely upon the strengths of each in order to produce the highest quality work. Ordinarily she begins her process from the perspective of a sculptor, carving a solid chunk of plaster with rasps, refining the details increasingly in order to create as perfect a prototype as possible. Although the objects that she creates are ultimately utilitarian, in her working process the forms follow function only in the most general sense. “It’s easy to get stuck on the idea of a cup or a bowl,” she suggests. “I don’t really think about that anymore. I just think about a container, and it can be any shape or size that I want it to be.”

This method of designing permits the user a great deal of latitude in determining the specific purpose that each object will serve. Moreover, although most of Erickson’s pieces are conceived as units within larger groups, usually with a plate underlying and unifying them, the compositions are open to rearrangement by the user. This formal flexibility is important to Erickson, not only because it permits a greater versatility in terms of the utilitarian potential of her work but also because she conceives of her forms as more meaningful when engaged in performance than when viewed as static tableaux. In fact, it is in terms of performance that design exerts the strongest influence over Erickson’s work. While a given container may serve variously as a cup, a bowl or a spoon, it is always designed to be easily accessed and employed, as well as to complement other elements within the composition aesthetically.

The potential for utility is of paramount concern to Erickson because of the conceptual tension that it introduces to her work. Despite the energy of her forms—the dynamic of crisply defined vertical, horizontal and diagonal lines and the sharp contrasts of the planes that these define—any visual dissonance inherent to individual pieces is resolved into a perfect harmony at the level of the group. Conceptually, however, a certain ambiguity, even a willful indeterminateness, remains. Contemplating a single container or even the larger group, one tends naturally to question its purpose. A certain frustration arises when no obvious answer presents itself. Clearly designed for use, Erickson’s works at the same time resist any easy digestion of design. In her pieces, design is deliberately both obtrusive and ambiguous, consequently drawing attention to itself as object of inquiry. Although this kind of inquiry has been overshadowed in American studio ceramics by those now-tired questions concerning art and craft, Erickson’s work provides an intriguing glimpse of what may well be things to come.